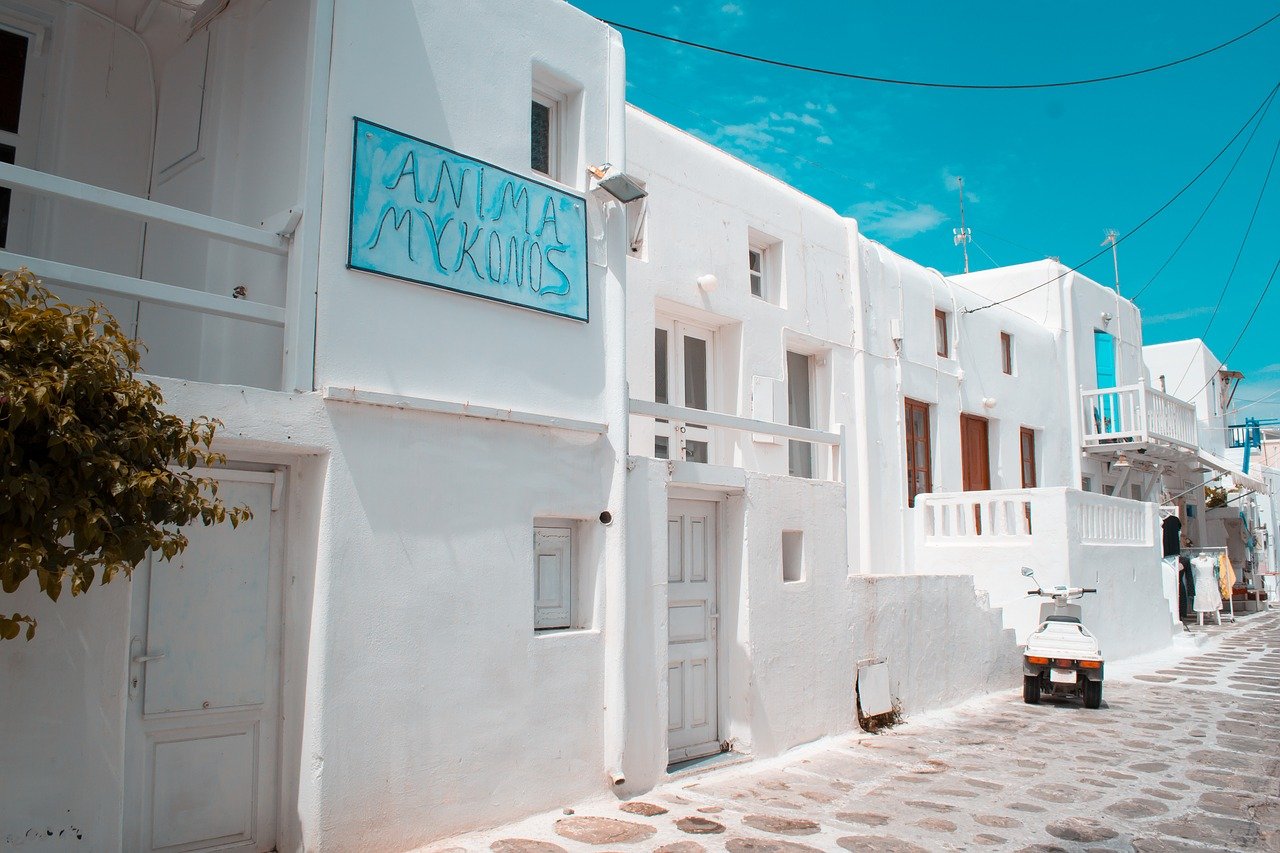 The best time to visit Mykonos will vary from person to person, depending what you want. If you want to visit Mykonos at its busiest, when nightclubs are buzzing, the beaches are packed, and the social life is at its height, then the best time is August. For other people, though, this would be the absolute worst time! 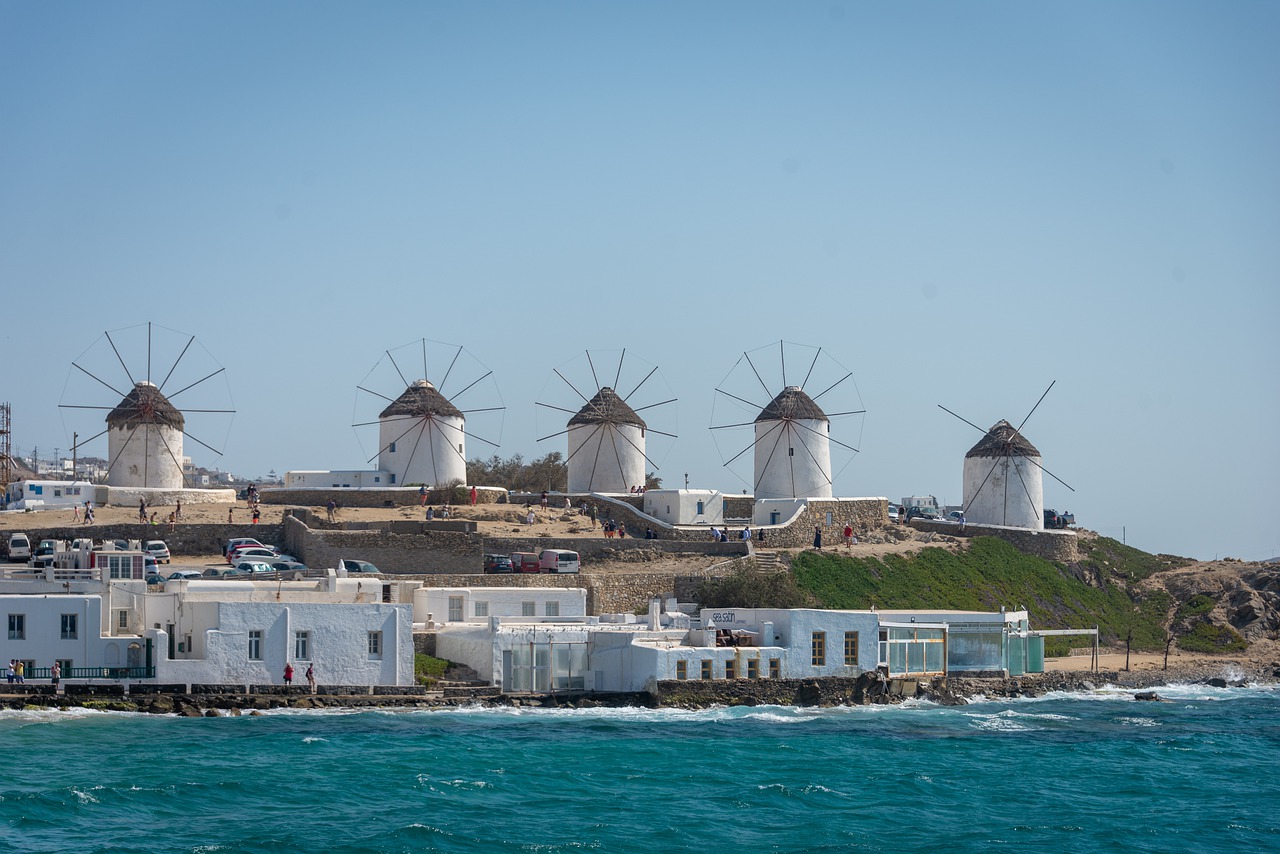 The Windmills of Mykonos

Mykonos in July and August

If you do visit Mykonos in August then you are guaranteed sunshine and no rain. There is usually no rainfall in either July or August, though in early July you might get a very brief light sprinkling.

The average high temperature in August is about 27C (80F), and just a degree or so cooler in July. Remember that’s the average high for the month, so some days are going to be much hotter than that. It also doesn’t cool down much at night so you’d better have air-conditioning or at least a fan. 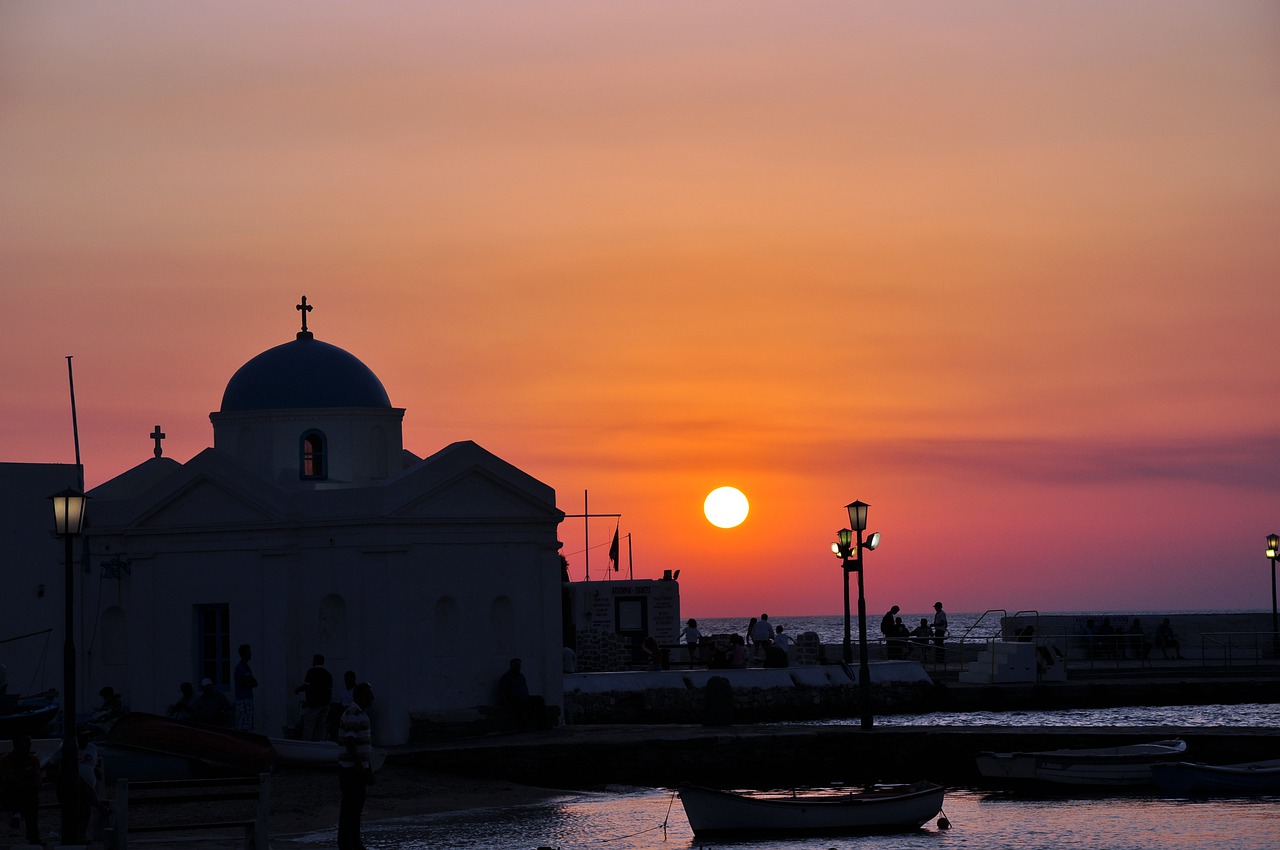 Another factor in deciding the best time to visit Mykonos is the Greek wind called the Meltemi. This blows down through the Aegean from the north in July and August, and can make being on a sandy beach very unpleasant. So if you like beaches and want to go in July and August, choose somewhere on the more sheltered southern coast.

You will obviously only visit Mykonos in August if you don’t mind crowds. The beaches are busy, the nightlife is busy, and Mykonos Town is busy. The crowds in Mykonos Town are also added to by the cruise ships which arrive and disgorge their passengers daily in season. Some visitors prefer to avoid Mykonos Town then, and return in the early evening when the cruise passengers have gone back to their ships.

The Windmills of Mykonos at Sunset

If you’re a beach person and like swimming, bear in mind that the later in the year you leave it, the warmer the sea temperature will be, so you might want to consider early September – very similar to August, slightly fewer people around, but everything will still be open.

Is October the Best Time to Visit Mykonos?

Many people say that October is the absolute best time to visit Mykonos. Our view is that you should visit in early October, as later in the month some places start to close down for the season. The peak season is so frantic and busy on Mykonos that some business owners decide they need a break and close down earlier than they might do on other less-busy islands. 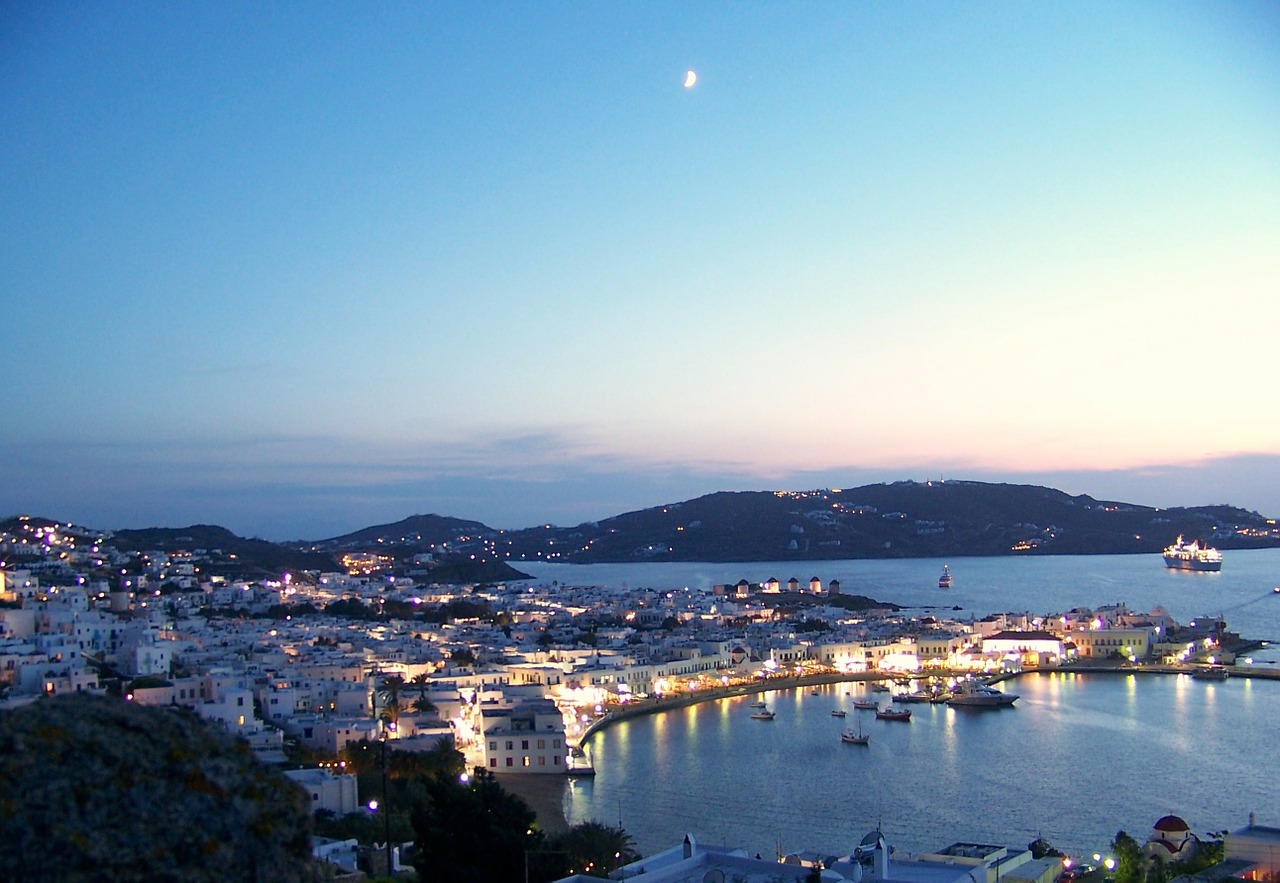 Later in October the weather will start to cool off just a little, though it will certainly remain pleasant and warm. There will be an increasing chance of a few rainy days, though. The average high temperature in October is 24C (75F), which is warm enough for most people. You can still enjoy swimming, hiking or other outdoor activities. 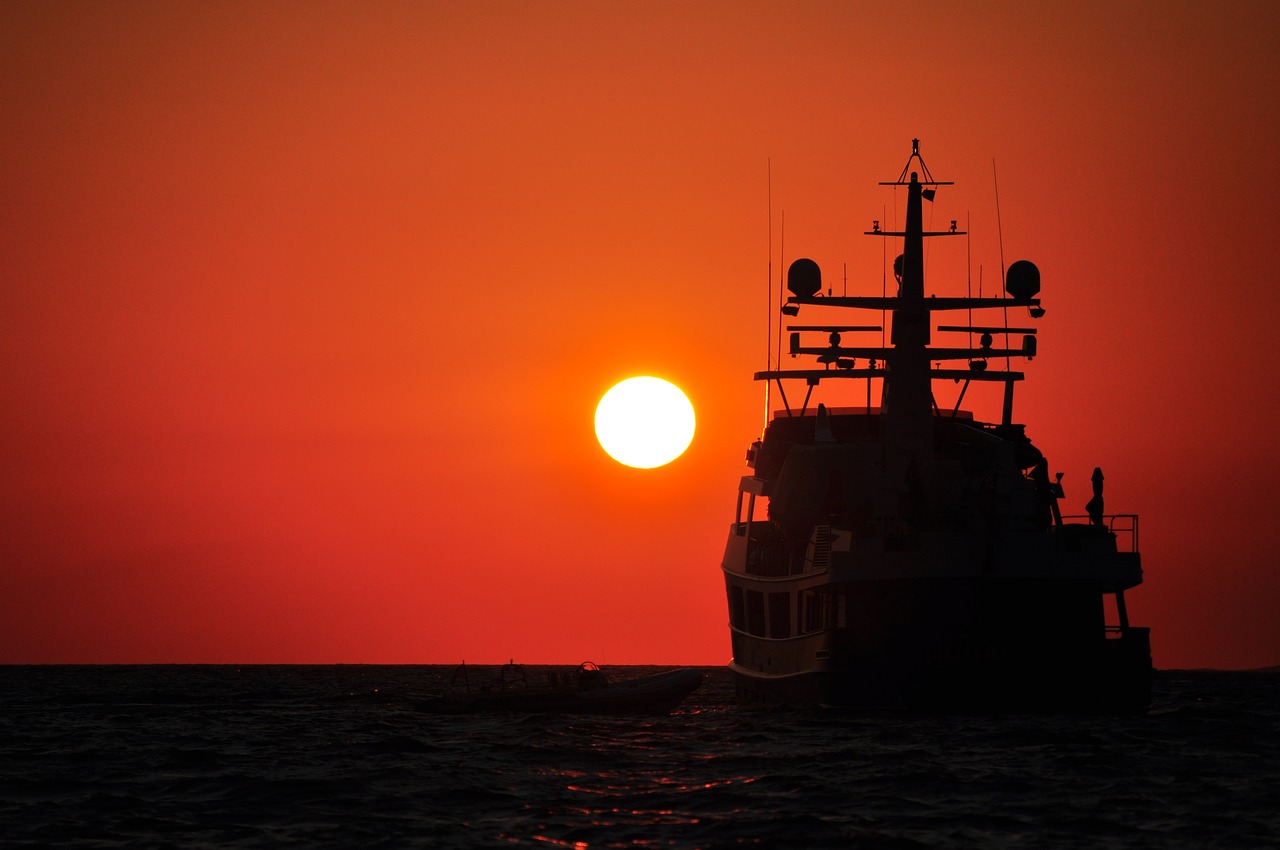 The difference between Mykonos in summer and in winter is huge, in all kinds of ways. You have to know what to expect of Mykonos in winter just as much as if thinking of visiting in summer.

To begin with, many hotels, restaurants, bars, cafes and shops will have shuttered up their businesses for winter, closing in about late October and not opening again till about April. Some businesses use Greek Easter as a sign of the start of the tourist season.

How to get from Mykonos to Santorini

You should probably still be able to find somewhere to stay, perhaps on Airbnb or somewhere like that, but you won’t find the large resort-style hotels open. There simply aren’t enough visitors to warrant them staying open.

You will also probably be able to find a place to eat, though your choice will be much more limited. It’s also going to be too cold for swimming, unless you’re really hardy. December-March are the coldest months with the average high in January being only 14C (57F). January is also the wettest month and on average there will be 11 days in January on which it rains. That’s not good news if they coincide with your visit.

Another disadvantage is that the archaeological site on the island of Delos is closed over the winter months. Again it’s a matter of economics. You have to take a boat to get there and there aren’t enough visitors to keep the boats in business or to warrant having staff on Delos.

Is the Best Time to Visit Mykonos at Easter?

Greek Easter is a fantastic time to be anywhere in Greece, as we’ve done it several times and have always had unforgettable experiences. It would certainly be a memorable time to visit Mykonos. Our advice would be to book your transport and your accommodation early. People born on Mykonos like to return home for Easter.

Depending on the dates for Greek Orthodox Easter, which aren’t usually the same as the Christian Easter, the weather should be pleasantly warm, though you might get some rain.

The Best Time to Visit Mykonos

As we said, the best time to visit Mykonos depends what you want to do when you’re there. If you want to party, go clubbing, get the warmest weather, then absolutely July/August is the time to go. If you have broader interests and want to spend some time on the beach but also visit Delos and maybe have a good choice of places to eat out and enjoy warm weather (and OK, risk a day or two of rain) then try June or late September/early October.