A visit to the Museum of Samos Wine to learn about the muscat grapes that produce the best dessert wines in the world and also the Greek spirit, Metaxa. 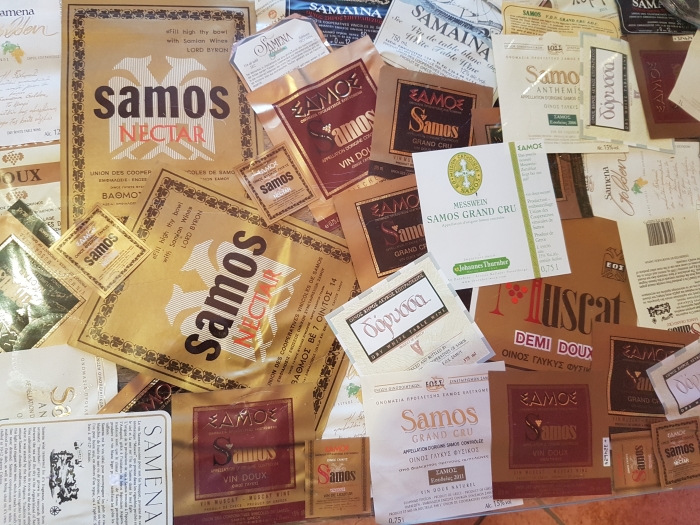 Old Wine Labels in the Museum of Samos Wine

Samos produces some of the best dessert wines in the world, and wine which goes into the famous Greek spirit, Metaxa. A visit to the Museum of Samos wine is the perfect way to get to know the wines of Samos.

Around the harbour from the Archaeological Museum in Vathi stands a museum to another subject that has played a huge role in the history of Samos: its wine. The Museum of Samos Wine celebrates the fact that wine has been made on the island since antiquity, and for centuries the name of Samos has been known around the world for producing some of the finest dessert wines. 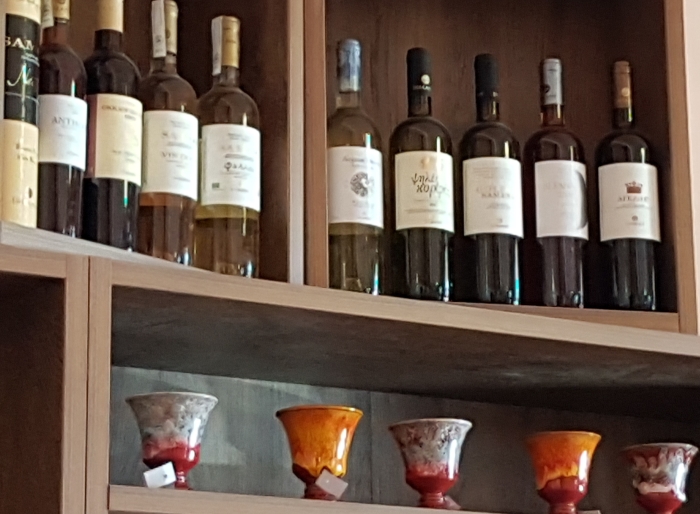 Samos even exports its wines to France, which is a triumph in itself as the French are renowned for being very parochial when it comes to their choice in wine. Yet 40% of the wine produced on Samos – and they produce over 5 million litres a year – is exported to France where it is mainly drunk as an aperitif. 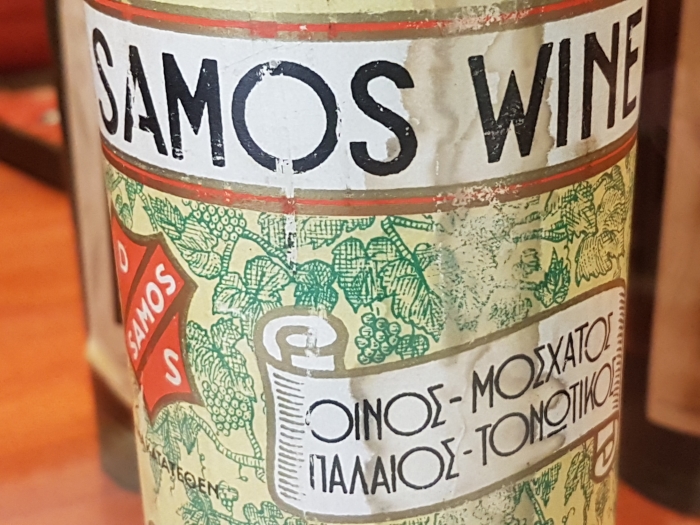 Another large portion of the best Samos wine is bought by the Metaxa company and taken to its distillery in Athens, where it is a key ingredient in Greece's unique spirit, Metaxa. (Most people refer to Metaxa as a brandy, and although it tastes very similar to a fine brandy it technically is not a brandy as brandy by definition does not contain wine.)

Metaxa: In Every Bar in Greece

The Museum of Samos Wine

The Museum of Samos Wine is housed in a building near the waterfront that dates back to the 1930s and was once a warehouse and barrel-making facility, our guide Yiannis Parassiris tells us. Iannis works for the wine cooperative that runs the museum as part of its activities, and which goes by the grand name of the United Winemaking Agricultural Cooperative of Samos. 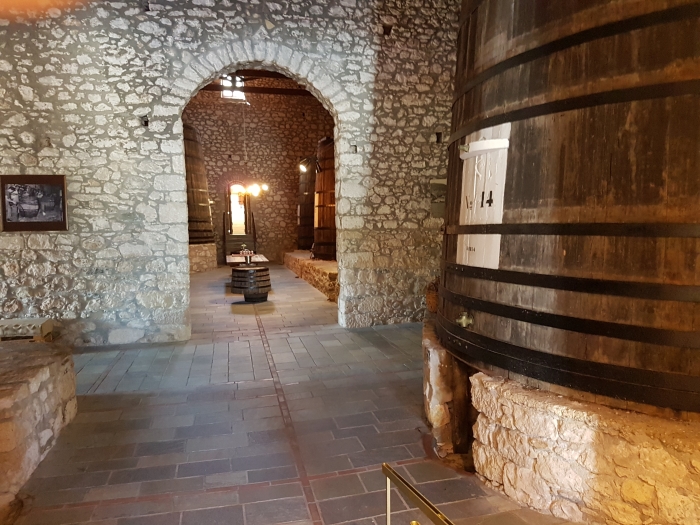 'Some of the old barrels are on display,' Iannis says, 'but we no longer make barrels here. The biggest one on display holds 18,000 litres. The cooperative was founded in 1934, although of course Samos wine had been popular for many years before that. The winegrowers decided to unite to avoid exploitation by European wine buyers. At the cooperative we take the grapes from 25 villages. We have about 2,500 members, with their families, and the vineyards cover about 1600 acres.' 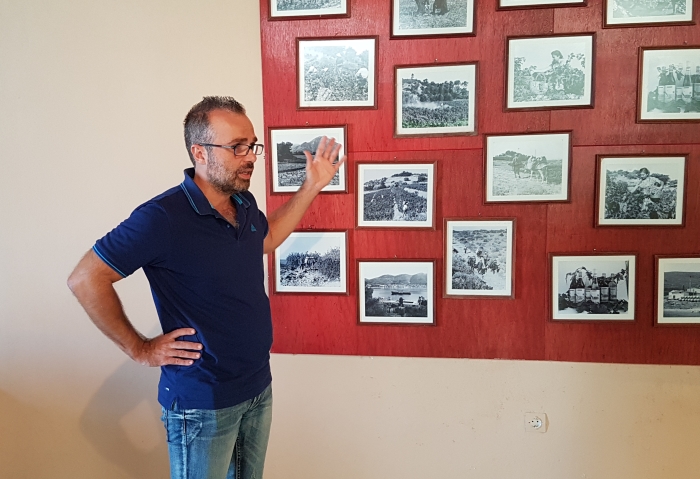 The vast majority of the Samos vineyards cultivate the muscat grape, which grows exceptionally well on the island. It mostly grows here and in the South of France.

'If you look at the historic black and white photos that are on display around the museum,' Iannis says, 'you'll find that not much has changed because of the difficult access. You can't get machinery into the vineyards so it is still all done by hand. One change is that each village traditionally had a grape collector, as most people only had donkeys, but now the growers bring their own grapes to us on trucks.'

Samos Vineyards on the Slopes of Mount Ampelos

On Samos the grapes grow at everything from sea level up to about 900m high (2,953 ft), with many of the vineyards on the slopes of Mount Ampelos, whose name appropriately means 'vine'. It's the highest mountain on Samos, at a height of 1,095 metres (3,593 ft).

Because of the different elevations, the harvest on Samos lasts for about two months, usually in August and September. The sea level grapes are ready first, though the higher grapes take longer to mature and produce a more concentrated taste and wine of a higher quality, although a lot depends on the individual microclimates.

'The union also supports growers with advice to help control the quality,' Iannis explains to us. 'This is an AOC so there are certain rules to follow. The secret to the success of the wine is the altitude, the drainage, the maturation. It's a sweet wine but also has a freshness that is almost metallic and might remind you of stone. That's why Samos wines are known around the world. Samos has been known for centuries as a supplier of top sweet wines.

'The price growers get from us depends on the quality of the grapes and the type of wine they will be making. Better grapes obviously get higher prices. They also get higher prices for grapes that go into the Grand Cru that goes to France because there is a lesser yield. We're not a profit organisation. We have to cover our costs and then the rest is distributed. The role of the union is vital in the success of Samos wine. Seven of the producers are elected to the Board of Directors. Many of them are quite young, in their 30s, so the younger people are still working the vineyards.'

Visiting the Museum of Samos Wine is clearly educational as well as entertaining. It's an impressive museum that covers two floors and the old photos are especially interesting. Elsewhere there are collections of wine-making equipment, bottles, books, ledgers and all manner of things.

At the end, naturally, we enjoy a wine tasting. We start with two dry muscats, an Aegean Breeze and a High Peaks. The Aegean Breeze manages to be both crisp and dry yet aromatic, and we try pairing the High Peaks with a yellow goats' cheese from Samos, a perfect match.

Ready for a Tasting?

We move on to the least sweet of the sweet wines, the Grand Cru that the French enjoy so much as an aperitif. It is light and fresh, with a slight metallic taste to it, good as a palate cleanser. The Vin Doux is 15% ABV, a strong and sweet wine that is the typical dessert wine we associate with Samos.

The Samos Anthemis is the same as the Vin Doux but aged for five years. It tastes like toffee, raisins and Christmas pudding, and is the most popular Samos wine in the UK. Samos Nectar is aged for six years and is a deeper more tawny colour, tasting of dried fruit, caramel and nuts. No wonder these drinks are popular at Christmas.

Before leaving, don't miss the museum shop, which sells a few other local products as well as wine. But check those wine prices. For medal-winning wine the prices are much, much cheaper than you'll find them outside of Greece.

Wines for Sale in the Museum Shop

So if you're in Vathi on Samos, don't think that the Archaeological Museum is the only museum in town. The Wine Museum of Samos is also full of history – and you get to drink wine too.

The Museum of Samos Wine is open May-October, Monday-Saturday, 10am-5.30pm, but double-check on the website before visiting.

Where to Stay on Samos