Best Things to Do on Symi

The best things to do on Symi include visiting the several museums, climbing to Symi Castle for the view and taking an excursion to the Monastery of Panormitis.

Symi Town is made up of its lower harbour area, known as Gialos, and the upper, older town known as Chorio. Gialos is, understandably, the busiest part of the town. The harbour is broad and long, framed by rising land to either side and overlooked by tiers of pastel-coloured houses with elegant pediments.

Ferries and excursion boats mostly dock at the west quay which is lined with cafes, tavernas, shops, and workshops. The harbourside road leads on from here past hotels and houses to the settlement of Harani, where small boatyards maintain the tradition of Symi boatbuilding.

The older district of Chorio rises dramatically from the east side of the harbour to where a line of old windmills punctuates the skyline and the ruined castle of the Knights of St John, occupied by the Church of Megali Panagia, crowns the highest point.

The best way to approach Chorio is to climb the magnificent stone staircase, the Kali Strata, where the atmospheric 19th-century mansions line the lower stairs, some abandoned, some now being restored.

From higher up the Kali Strata you enter a fascinating world where tempting alleyways lead off to either side into a maze of occupied and unoccupied houses linked by stairways and narrow passages, the whole punctuated with open terraces and squares. 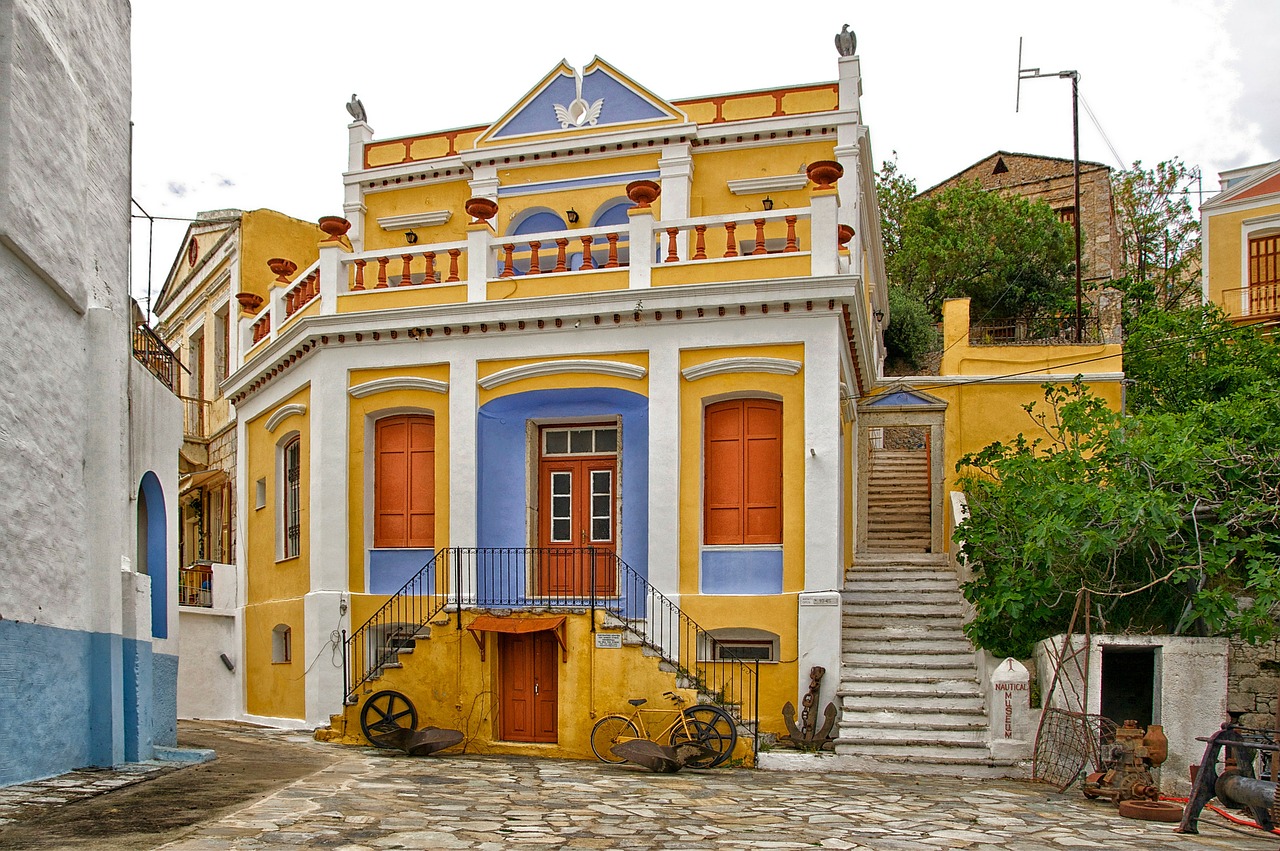 The Building that Now Houses the Nautical Museum on Symi

This museum is down in Gialos and occupies a handsome neoclassical building. It’s not a huge collection but does tell you a lot about Symi’s grand nautical history, with both shipbuilding and sponge-fishing being big parts of the island’s past. There are model ships, old maps, diving suits, paintings, and other items on display.

These two museums are side by side in Chorio and overlap a little in their contents. Still, for a tiny island it’s impressive to have these historical and cultural displays to see, showing the rich history of the place. At one time Symi had a bigger population than neighbouring Rhodes, which is hard to believe as today

There isn’t a lot that remains of Symi Castle but it’s an enjoyable walk to get up there, through the upper town, and you do get the perfect view of Symi harbour far below. Inside the castle remains is the Church of Megali Panagia.

The small village of Pedio (or just Pedi) lies on the south side of the high promontory that flanks Symi Town. It still retains its engaging character as a fishing village from where small boats work the inshore waters. There is a narrow shingly beach on the waterfront, and it takes half an hour to walk along the path across the rocky hillside from the south end of the village to the pleasant sandy beach of Agios Nikolaos.

A 20-minute walk along a path from the north end of the village leads to the shingle beach of Agios Marina. Both beaches become very busy in summer, as crowded water-taxis arrive from Symi Town.

The Monastery of Panormitis (Moni Taxiarchas Michael Panormitis) lies at the far southern tip of Symi and is an extremely popular destination for excursion boats. It can be reached by road from Symi Town, but this involves a hard six-hour walk or by taxi. The most convenient – and dramatic – approach is from the sea into the horseshoe-shaped bay that lies in front of Panormitis below pine-covered hills.

The 18th-century monastery is a huge building, almost Venetian in style. Its tall, baroque bell tower dominates the long white facade of the main building. The inner courtyard contains the free-standing church, which has a superb carved wooden altar screen and numerous gold and silver lamps, as well as a silver-leafed representation of the Archangel Michael, patron saint of Symi and protector of sailors. Here you can visit a small Byzantine Museum and there is also a museum of folklore.