Rhodes is a major ferry destination at the hub of the Dodecanese, and the main port is right in the centre of Rhodes Town. You can easily walk into the Old Town from Rhodes harbour, and there are many hotels, shops, and restaurants within walking distance. 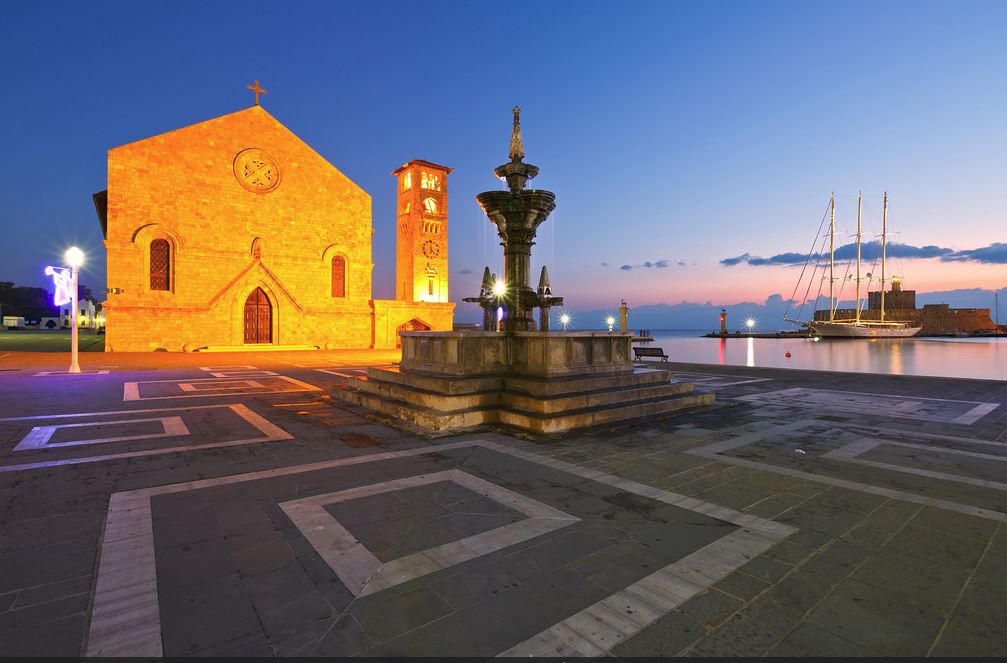 Rhodes is the largest of the Dodecanesian islands and also their capital. Much of the coast on the northern end of the island is given over solidly to tourism, as one town has merged into the next resulting in one long stretch of hotels, tavernas and souvenir shops.

This part of the island has good beaches, so it’s a great place to be if you simply want to lie in the sun and then have a good time at night in the bars and discos. But the island is big enough to provide alternative attractions too.

Rhodes Town is a mixture of the very old and the very new, with the medieval walled Old Town being one of the jewels of the Aegean. It was designated a World Heritage Site in 1988. Many cruise ships use the harbour, giving visitors a few hours ashore to explore the Old Town… or the good shopping in the New Town, if that is their preference. There are also several museums worth visiting.

Their Palace of the Grand Masters and the Street of the Knights are unrivalled in the Dodecanese for their splendour and beauty. The fact that the Old Town has also turned into a tourist bazaar is inevitable, but only the few main streets have been affected and if you venture into the back streets you will see life going on as it does in any close-knit Greek community.

Near the main entrance to the Old Town is the Archaeological Museum, a place of historical interest in itself as it is within what was the hospital of the Grand Knights, built between 1440 and 1481. Rhodes is rich in archaeological discoveries, and there are examples here from its main sites, including Kameiros, Ialyssos and Lindos. Its star exhibit is the Aphrodite of Rhodes, a sensuous 1st century BC carving in marble.

There are several other museums within the Old Town’s thick walls, including the Byzantine Museum which is in what was an 11th-century church which later became the Mosque of Enderum during the Turkish occupation.

The Decorative Arts Museum has a very good collection of works that are unique to the island, including decorative tiles from Lindos and a reconstructed house showing the local tradition for patterned courtyards made from black and white pebbles, and the raised sleeping platforms.

There are numerous other buildings to see in the Old Town, including several mosques and a hammam (Turkish baths), while the most notable building in the centre of the New Town is the Nea Agora market building, just across the main street from the harbour. It is small but invariably lively, with some simple but good cafes and restaurants.

Take this hour-long walk through Rhodes Old Town, starting at Mandraki Harbour, to see all the highlights that the Old Town has to offer. Also see our page of brief suggestions for What to Do on Rhodes, and one for Where to Stay in Rhodes Town.

South of Rhodes Town, on the eastern side of the island, the resorts at first merge into each other though eventually the towns do regain their distinctive identities. There is no town more distinctive than Lindos, which has something for everyone. It is a popular holiday spot with an excellent beach, yet the back streets of whitewashed houses manage to retain their beauty, while above the town and the beach stands the grandly impressive acropolis. See our full page about Lindos.

Don't miss this account of spending Easter on Rhodes Greek-style.

The most popular destination on the western side of Rhodes lies at the end of a turning off the main coastal road, just past the airport. The turning leads to Petaloudes, which has been renamed Butterfly Valley. Slightly misnamed, in fact, but Moth Valley doesn’t sound quite so appealing. Between June and September literally millions of Jersey tiger moths live in the valley, attracted by the unusual storax trees, whose resin smells like vanilla and is used in the manufacture of frankincense. 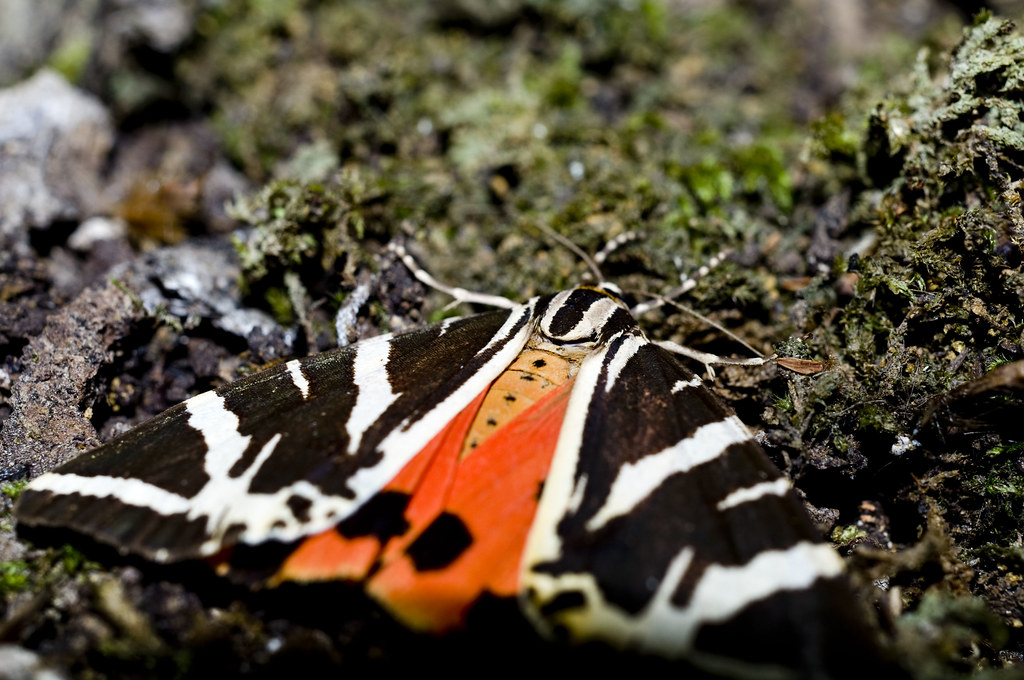 Sadly the tour guides who lead coach parties up here daily in summer all encourage the visitors to clap their hands to disturb the moths and make them fly into the air, a deplorable if understandable practice which has led to serious declines in the numbers of moths over the last few years. 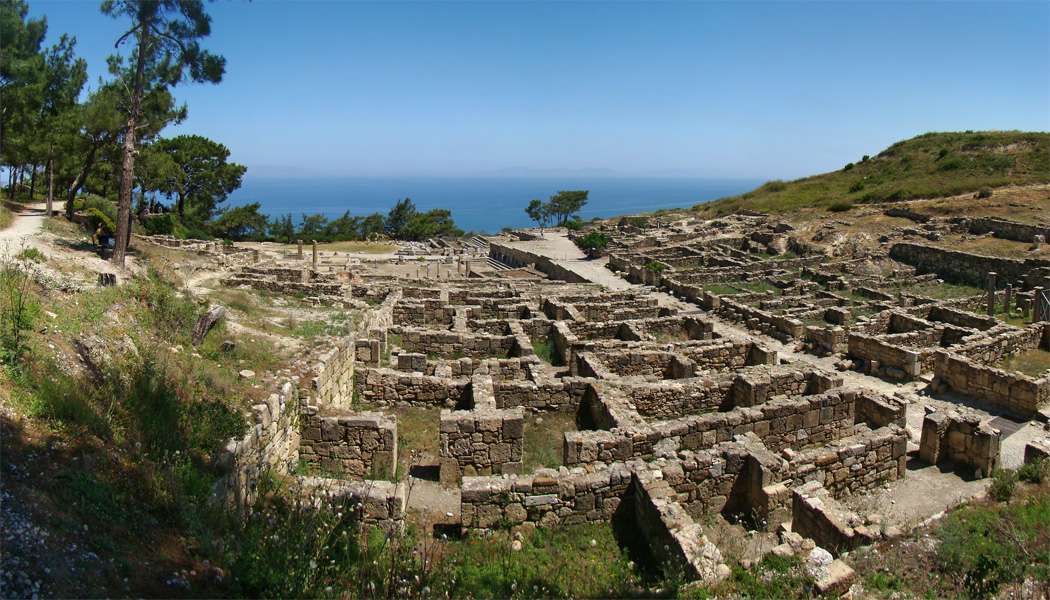 Further south is the site of Ancient Kameiros, which is one of the best-preserved examples of a classical Greek city. Many of the remains go back to the 6th century BC, including a cistern that was the water supply for about 400 families, and the Temple of Athena. In those days Kameiros was a big and busy city, sadly destroyed in an earthquake in 142 BC, after which it lay undiscovered until 1859. Local farmers found a few graves, and after these were reported excavations took place in earnest and produced the remains of a city that has been compared to Pompeii in its significance. 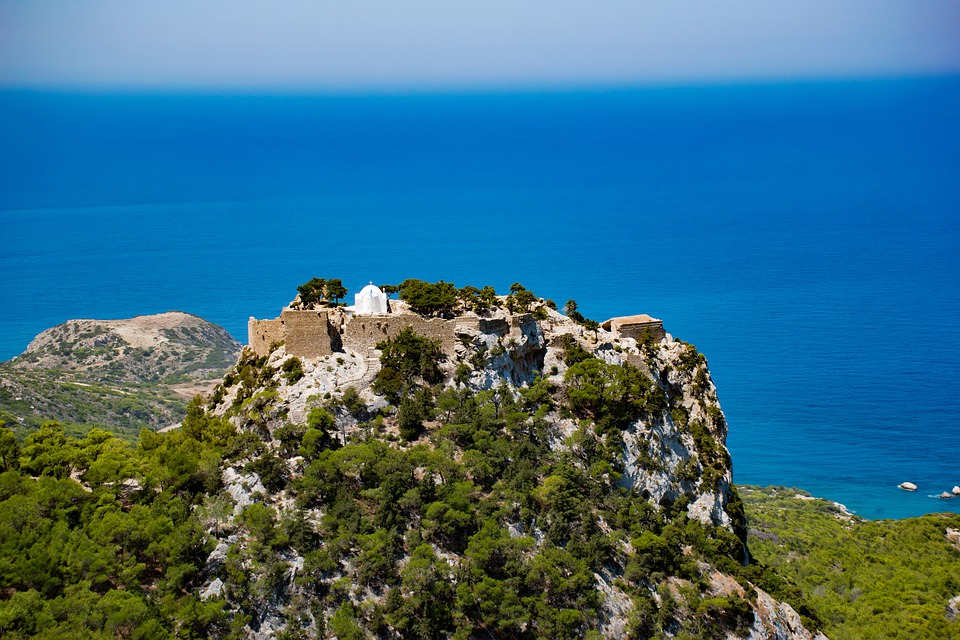 Further south still is a site that is impressive both geologically and historically. Monolithos is the main village in the southwest corner of Rhodes and it is easy to see how it acquired its name. The area is dominated by a huge monolith of a rock that towers 235m above the surrounding woods and drops almost sheer down to the sea. At the top of the rock is a 15th-century castle that was built by the Grand Master d’Aubusson, and within its walls are two 15th-century chapels, both with some original frescoes. It is rather a demanding and precarious walk to the top, but this does not deter many people from going, particularly to watch the sunset over the sea and the offshore islands, relaxing with a drink in one of the stunningly-set tavernas.

In summer there are regular cheap charter flights to Rhodes from many European destinations. Visitors from the USA and other countries outside Europe should consider flying to London or other European city and taking a connecting flight from there.

Within Greece, you can also fly to Rhodes direct from Athens International Airport, with several flights a day. There are also daily flights to Iraklion on Crete, and to Thessaloniki and Santorini, from various Greek airlines like Olympic, Aegean Air and Sky Express. Sky Express has flights between Rhodes and several Greek islands so it's worth checking out their website.

Other islands with flight connections to Rhodes currently include Kos, Leros, Lesbos, Samos, Chios and Karpathos, and a few other islands. The Greek airline situation is constantly changing, though, so always check in advance and never make assumptions.

There are daily ferries to Piraeus for Athens, several a day to the nearby island of Symi (a popular day trip from Rhodes), and less frequently to places including Kos, Karpathos, Kalymnos, Santorini, Patmos, Crete, Tilos, Halki and Thessaloniki.

Where to Stay in Northern Rhodes

What to Eat and Drink on Rhodes

Where to Eat in Southern Rhodes

Where to Eat in Rhodes Town

Read our guide to Rhodes Food and Drink.

Lindos
If you want to know what's going on in Lindos, and find out about where to stay in Lindos, visit the excellent website of Exclusively Lindos.