Mandraki Harbour is the main harbour of Rhodes Town for travellers and from here you can catch ferries to Piraeus, Symi, Kos, Kalymnos, Patmos, and to Turkey. 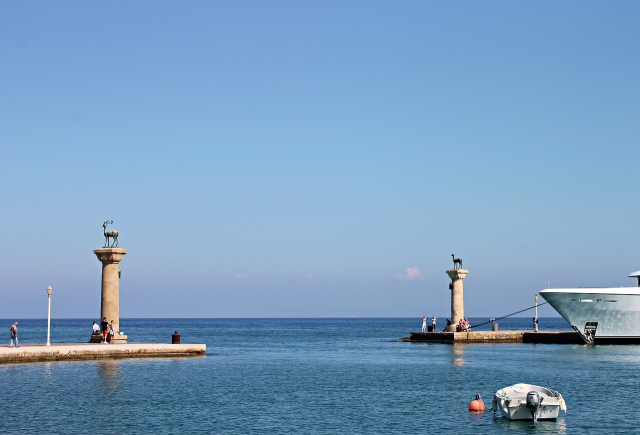 The Entrance to Mandraki Harbour

The attractive Mandraki Harbour is the most northerly of Rhodes Town’s three harbours and by far the most interesting. This was the ancient ‘sheep pen’, the name in Greek being mandri, a name often used for small, encircling harbours. To the east is the Commercial Harbour, and beyond that is the Marina.

Mandraki was one of the five ports of ancient Rhodes. It was the naval port and was known as the ‘small harbour’ as opposed to the ‘great harbour’, the present Commercial Harbour. The entrance to ancient Mandraki could be sealed with chains.

Mandraki Harbour is the place to head to if you want to do any boat tours from Rhodes Town. Several boats offer island tours so ask around to find out exactly where they’ll take you and when you’ll come back. Some will simply take you to a remote beach and then return for you later in the day, while others visit several places and make a proper tour of it.

There are also different options if you want to visit the nearby island of Symi. Some are for day trips only, and you won’t be allowed to take anything more than a backpack with you. If you want to take luggage and are going to Symi to stay overnight or for a few days, you must find the regular ferry boats, in another part of the harbour.

If you do plan to take the regular ferry to Symi to stay there, take the one which arrives in the evening. Sailing into the beautiful Symi harbour by night is a magical experience.

You can also go to several other Greek islands from Mandraki Harbour, including Kos, Tilos, Kalymnos, and Patmos, and also to Turkey. There are regular ferries to and from Piraeus, as well.

The Colossus of Rhodes 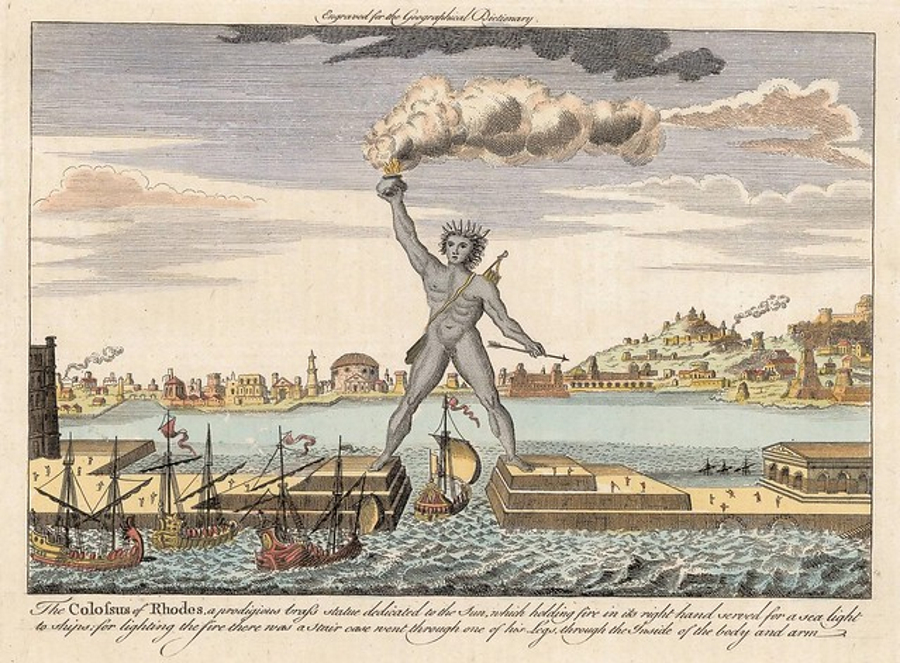 Legend claims that the harbour entrance was spanned by the legendary Colossus of Rhodes, but there is no proof of this. Today twin columns bearing statues of Rhodian deer, a stag and doe, stand on either side of the harbour gap. 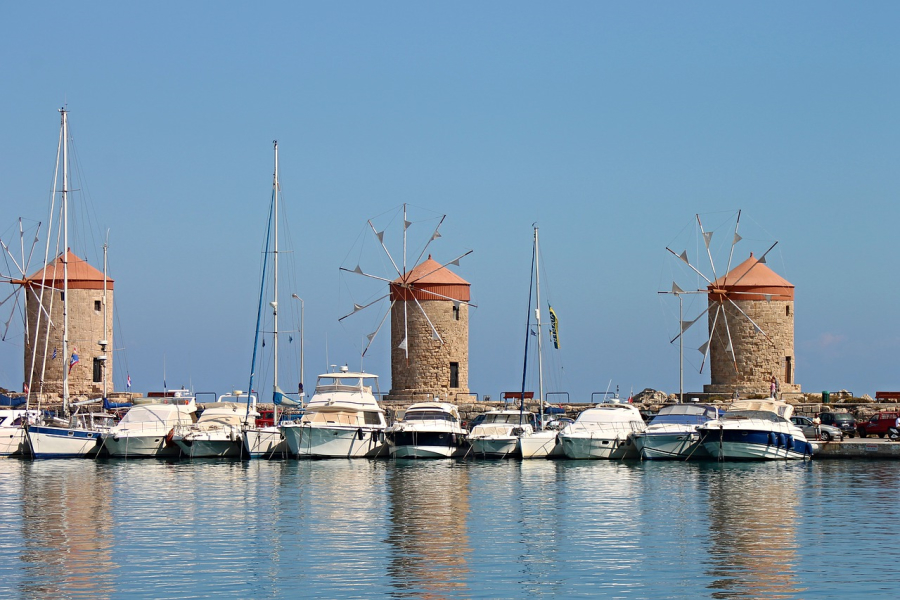 A row of restored medieval windmills, symbols of the days when corn was ground at the harbourside, stands along the outer quay. 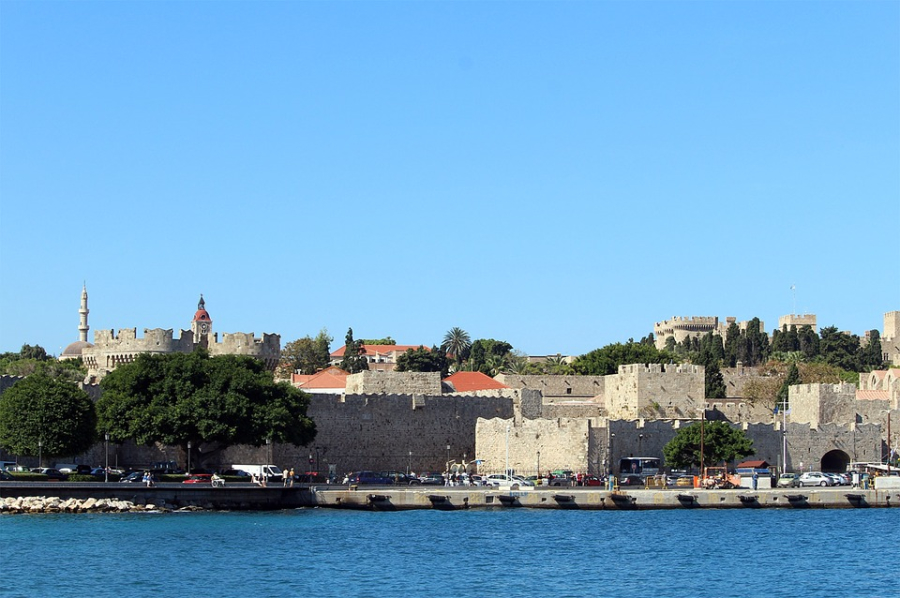 View of the Old Town from Mandraki Harbour

At the seaward end of the quay is the fortress of St Nicholas, built in the 1460s and now the site of a lighthouse. On its landward side the harbour is bordered by the busy Eleftherías Street, at the end of which is Plateía Vasileos Georgiou I. Here the Italians left a collection of interesting monumental buildings in a mix of Venetian, Gothic and Ottoman architectural styles.

Cathedral of St John the Evangelist 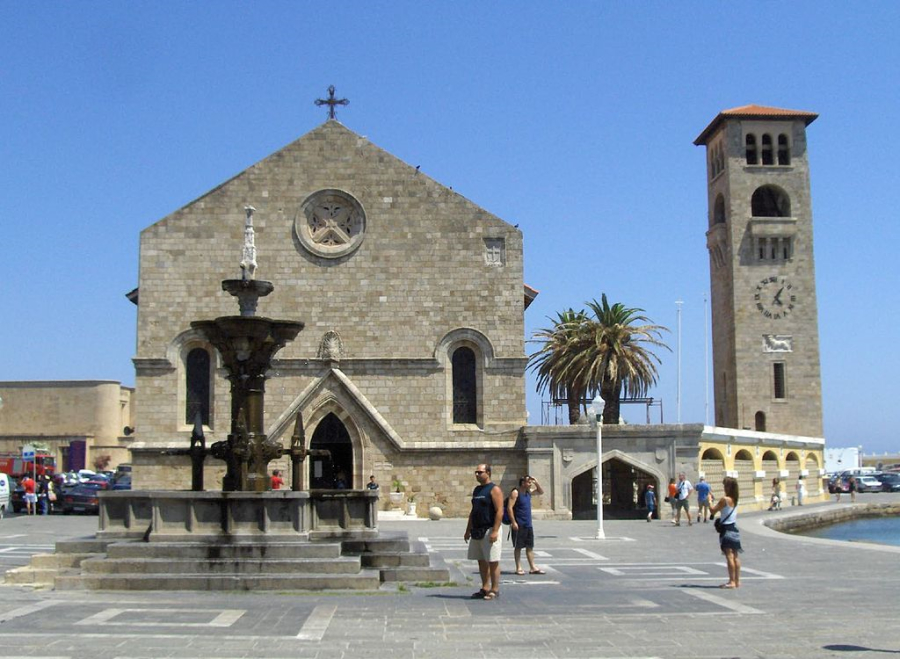 Cathedral of St John the Evangelist on Mandraki Harbour

On the quayside stands the Ekklisía Evangelismoú, the Cathedral of St John the Evangelist. This was built in 1925 as a Catholic church while the Italians occupied Rhodes, and as originally called the church of San Giovanni dei Cavalieri. It uses the distinctively-coloured local sandstone. 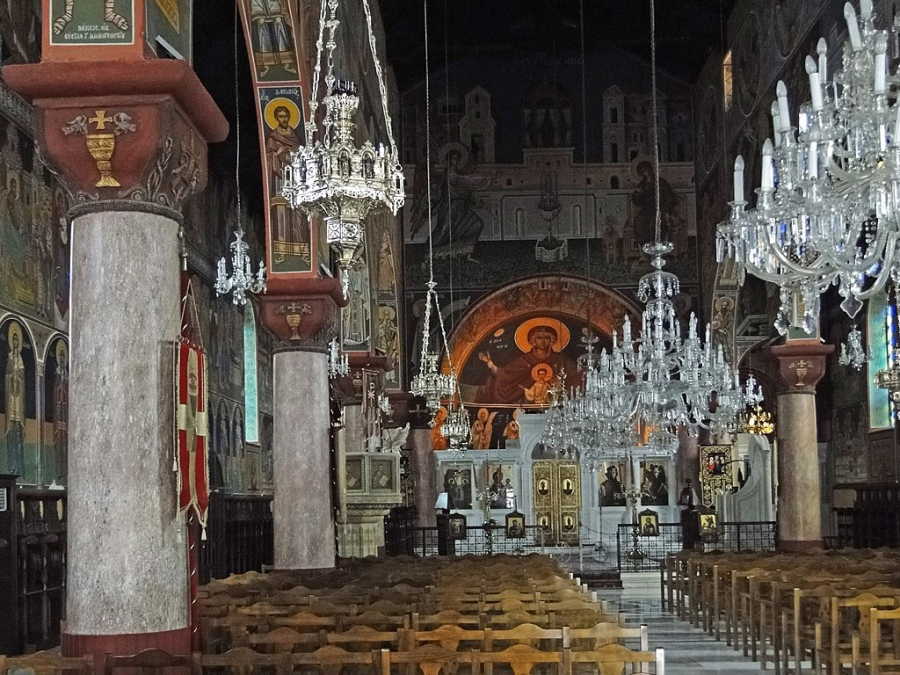 Cathedral of St John the Evangelist on Mandraki Harbour