Rhodes festivals and events include those celebrated throughout Greece like Easter and Greek Independence Day, and others that are unique to the island. 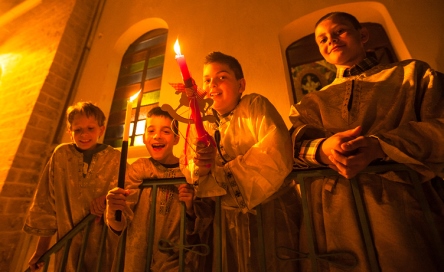 Easter is Celebrated Throughout Greece

A service is held in the Cathedral of St John the Evangelist in Rhodes Town. There’s also the blessing of the sea water at Mandraki Harbour, when a priest throws a crucifix into the water and youngsters dive in for the honour of retrieving it.

During the weeks before the beginning of Lent, various carnivals are staged on Rhodes. On the Sunday before Lent there are carnival processions and fancy dress in Rhodes Old Town, and also in Archangelos, Appolona, Afantou, Ialyssos, and Kameiros Skala.

The following day is called Kathari Deftera, meaning Clean Monday, and is when families and friends head for the countryside and beaches to picnic and to fly kites.

People all over the Dodecanese celebrate the reunification with Greece in 1947. There’s a parade in Rhodes Town and also theatre performances.

Widely celebrated throughout the whole country, of course, and it’s a good day to be in Rhodes Town.

This is the most important festival of the Greek Orthodox Church. Expect explosive firecrackers over Easter weekend. Symi has its own very characteristic celebrations, which you can read about on our page, Easter on Symi. Note that Greek Easter only occasionally coincides with western Easter dates.

Easter is the major festival of the religious year. On Good Friday evening the church ceremonies begin in town and village, both inside the churches and outside as solemn processions move through the streets.

On Holy Saturday night the most powerful ceremony takes place and culminates with great bursts of fireworks in the streets as Christ is declared ‘risen’. People flow from the churches bearing lit candles which they try to keep alight until they reach home.

There are early breakfast feasts on Sunday morning and then general feasting throughout the day. Churches are always packed but people gather outside as well. Remember to dress appropriately if you attend a church service. You can read about a personal experience of being on Rhodes at Easter on our page, Easter on Rhodes.

There are country picnics and garlands of flowers are brought back to decorate people’s doorways and balconies.

June 24 – The Feast of St John the Baptist

Bonfires and parties take place all over the island.

On Rhodes this week there are concerts, fireworks, and boat races.

July 20 – The Feast of Profitis Ilias

Large numbers of people assemble at the mountain of Profitis Ilias to celebrate the feast day of the Prophet Elijah.

There are lively celebrations at the village of Soroni in honour of St Paul.

There are dance festivals at various villages throughout this month.

A religious festival on the nearby island of Halki sees; traditional mock battles, with the throwing of flour and eggs (so don’t dress smartly!) The ferry from Rhodes to Halki takes about 90 minutes but you may need to stay overnight so make sure you’ve got accommodation booked in advance.

This is a very important week-long festival, during which many Greeks return to their native island and village. If planning to visit Greece around this time make sure you have your transport and accommodation booked well ahead.

Where to Stay in the Dodecanese

September 8 – The Birth of the Virgin

This is widely celebrated throughout Greece but there is a unique event at Tsampika on Rhodes, when women wishing to conceive make a special pilgrimage to the hilltop monastery church.

Patriotic celebration of Greece’s refusal to capitulate to the demands of Mussolini in 1940 that the country should surrender. There are parades, folk dancing, speeches, and general celebrations all over Greece.

November 8 – The Feast of the Archangels Michael and Gabriel

There are religious celebrations and festivities at Archangelos on Rhodes, and at the monastery of Panormitis on the neighbouring island of Symi.

Although it's not as big a feast in Greece as Easter, Christmas is still widely celebrated. You may hear children singing Christmas carols on Christmas Eve, going from house to house and being rewarded with sweets, fruit, or some small change.

Christmas lasts from Christmas Eve to January 6th, the Feast of the Epiphany, and Greeks usually wait till January 1st before exchanging gifts, though some do now do it on Christmas Day.