Easter on Symi is a wonderful Greek celebration and one of the best times to visit the little gem of an island a short ferry-ride from Rhodes in the Dodecanese.

Easter on Symi is not for those of a nervous disposition. They soften you up with the fireworks first, though Greek bangers are merely hand grenades in a different shape. Just when you’ve got accustomed (more or less) to these being thrown around in the streets – and even in the middle of tavernas – they start firing off the red distress flares that are used by fishermen. These burn so vividly, loud and long, that they must stand a good chance of being spotted from space. But it’s not until you’re confident you’ve now seen and heard it all that they bring on the big artillery: the dynamite.

It’s sometimes hard to believe that Easter is the most solemn and holy time in the Greek calendar, when those who have left to seek employment or excitement elsewhere return home to their islands and villages.

Arriving on Symi is an event at any time. There is no airport so you fly to Rhodes and take the ferry from Rhodes to Yialos harbour, a handsome amphitheatre of neo-classical houses retreating up the hillside. We arrived on the Wednesday before Easter, when the crowd gathered around the harbour were more than usually animated.  Men and women jostled to stare into the heart of the ship – some almost in tears, clutching white-knuckled at handkerchiefs – until cousin, son or daughter was spotted and the anxious face turned to one of pure joy.

Behind us as we walked ashore, the ferry disgorged the rest of its cargo: a few dozen mattresses, two sofas, the usual fruit and vegetables, motorbikes, and what seemed like half a forest of cut timber, destined for the boatyards. Symi was at one time richer than nearby Rhodes, its wealth coming from sponge-fishing and boat-building. As a notice in the bank informs you:

‘3,000 years ago here was the building of ancient-war-ships. Today is the last guard of Europe in East. The last light of civilisation! Tell to your friends to visit Symi island.’

The Thursday before Easter is the day for the dyeing of eggs and the baking of buns. At the evening church service the altar is draped in black as the story of Christ’s Passion is read in full in all its 12 parts. While the Papas chanted at the front, a woman was busily ironing his vestments at the back of the church.

On Good Friday, the epitaphios on which Christ’s body was to be laid was decorated with flowers by the women and young girls of the island. Just after 9pm, the funeral procession began to make its way down from the church and through the streets. At the front, a man holding a crucifix made of flowers intoned a chant, while behind came the choir, responding. Christ’s body followed on the flower-decked bier. A plump little boy beamed moon-faced at his family and friends as he walked behind the Papas, proudly holding his cape, and someone shuffled along with a brolly to protect the priest from a scattering of rain.

The procession began to make its way round the harbour, stopping from time to time to bless the shops and tavernas that line it. It came to a permanent halt outside Les Catherinettes taverna, where a plaque above the door commemorates the signing of the treaty by which the Germans surrendered the Dodecanese to the Allies in 1945. Behind the procession, a taxi driver hooted his horn and shouted at the priest and people in an attempt to get past: Christ may be dead but a man still has a living to make. The rain worsened and several dozen people (including us) along with the cross and Christ’s body, all crowded into the taverna, much to the surprise of the diners inside.

When everyone was ready to continue, the Papas was nowhere to be found. He’d obviously had enough and gone home, so the procession continued without him. We passed the basketball stadium and the church of Ayios Ioannis, still down at harbour level, before getting inextricably entangled with another procession that had come down from the church of the Megali Panagia high up in the old town, the chorio. Red flares and green flares lit the skies and were reflected in the rain on the road and on the water in the harbour. Louder explosions could now be heard in the distance: dynamite.

Don't miss our account of another holiday on Symi one August when it coincided with the Feast of St Sotiros!

The fact that Friday is meant to be a solemn procession should serve as a warning of what is to come on Saturday night at the joyous midnight moment when Christ is risen again. As the first stroke of midnight rings out, the churches are plunged into darkness, then the Papas holds a candle from which the people light their own candles and he announces Christos Anesti, Christ is Risen.

When the lights were turned on again, greetings were exchanged, bells rung, and more flares lit up the sky. Specks of light began to move along the dark back streets as people made their slow way home, trying to get there before the candle flame went out and so ensuring them of good luck for the rest of the year.

We watched events unfold from the roof of our hotel, the Aliki, which provided a perfect view. A searchlight suddenly whitewashed the blue-black sky from somewhere in the next bay. And that was when the earth exploded. From a hillside a short way inland, a huge bang went up and rattled around the town, causing rumbling echoes down in the harbour. The hilltop lit up and shook, and a moment later the dynamite battered our ears as though we were caught inside a thunderclap. Someone threw a banger down a nearby alleyway below, and a young lad started dropping fireworks into a metal dustbin. More dynamite exploded and we felt the hotel tremble beneath our feet. We retired to our room.

Sunday is the day for families to barbecue lamb and, on Symi, to barbecue Judas Iscariot as well. His effigy – looking rather French with his moustache and natty black jacket – was paraded around the harbour on a chair in a procession led by two musicians, on saxophone and accordion. Judas was smoking a firework (not yet lit) and there were others poking out of his pockets. He was set down by the clock tower at the harbour entrance, while the mayor posed for the cameras and a group of men began to dance around the chair.

Judas was then hoisted to the top of the two huge anchors that are embedded in the harbour-side and sprinkled with paraffin, particular attention being paid to his private parts, much to the amusement of the large crowd. The onlookers were pushed back a little in a rare Greek nod towards safety, and the traitor was set alight. The flames crackled up his trouser legs until the fireworks began to explode. At that point the crowd needed no encouragement to move even further back while the rest of Judas went up in fire and his head fell flaming to the ground to another great cheer. 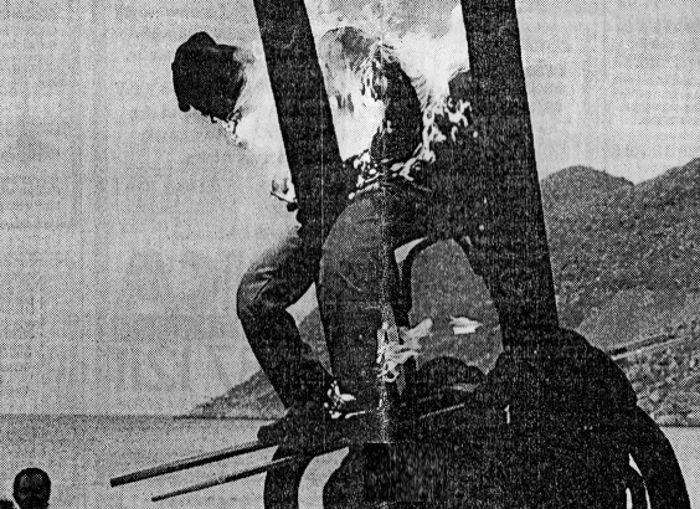 A few minutes later the hoo-hah was over, the crowd had gone for a drink and an ice-cream, and the little boys couldn’t wait to poke around in the ashes. We went back to pay the bill at the café we had hurriedly left when the Judas procession had gone by, but the owner waved our money away. ‘On the house,’ he insisted, ‘because I know you will come back to Symi again.’ And we will, though if it’s at Easter we’ll be packing the aspirin and ear-plugs.