During Easter on Rhodes, Greece Travel Secrets publisher Mike Gerrard travels from Lindos to Kattavia to visit a monastery and experience Easter Greek-style. 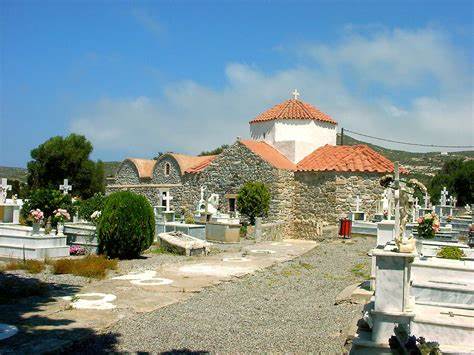 The Church at Kattavia in the south of Rhodes

We left Lindos at midnight on Saturday as the church bell was ringing, the fireworks exploding and the villagers were taking their Easter candles home and bidding each other Christos Anesti, Christ is Risen. For Ianni this was to be a rare chance to see his family in the south of Rhodes, as for 180 days of the summer season he would be working in a bar he co-owned in Lindos, catering to the mass of visitors, seven days a week for at least ten hours a day. 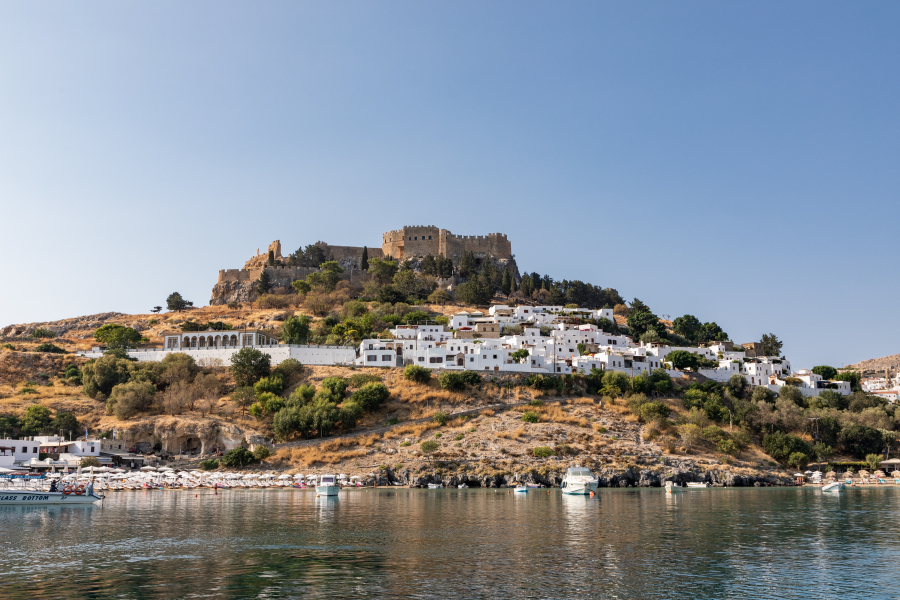 As I’d already helped him get his bar profits off to a good start for the year, he invited me to spend Easter Sunday with his family in the village of Kattavia, where he returns in the winter. By 1am we were there, and after Ianni woke his parents up to tell them he was home, we went to light a candle in the village church, where people were singing and praying their way through till Sunday morning, the air thick with incense and chanting. 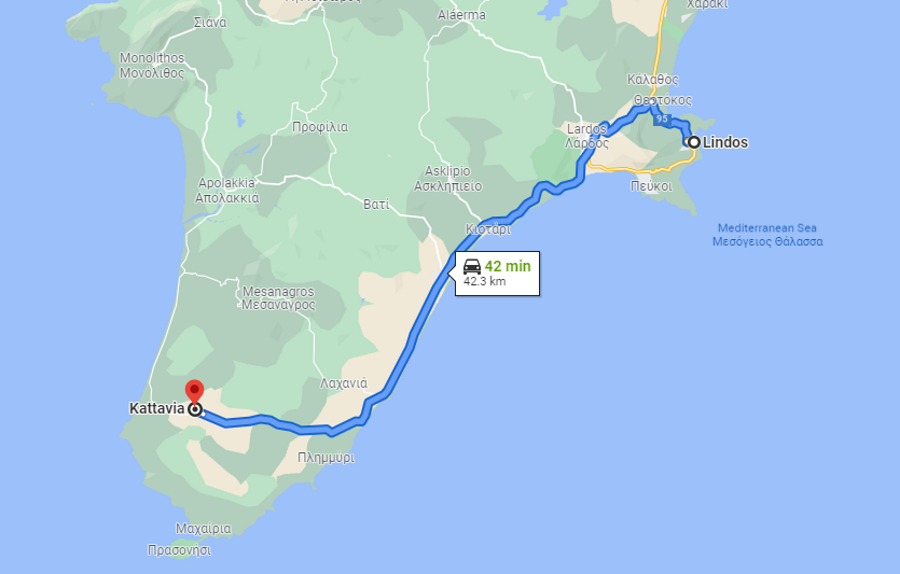 For such a small village, the church is enormous, at least twenty times the size of the tiny Byzantine one in Lindos. Kattavia is home to about 2,000 people, Ianni tells me, though only 350 or so live there permanently, the rest away working for ten or twenty years in America or Australia while their homes stand empty awaiting their return. Meanwhile, the life of the village centres on its church, two shops, three cafés and a solitary garage. 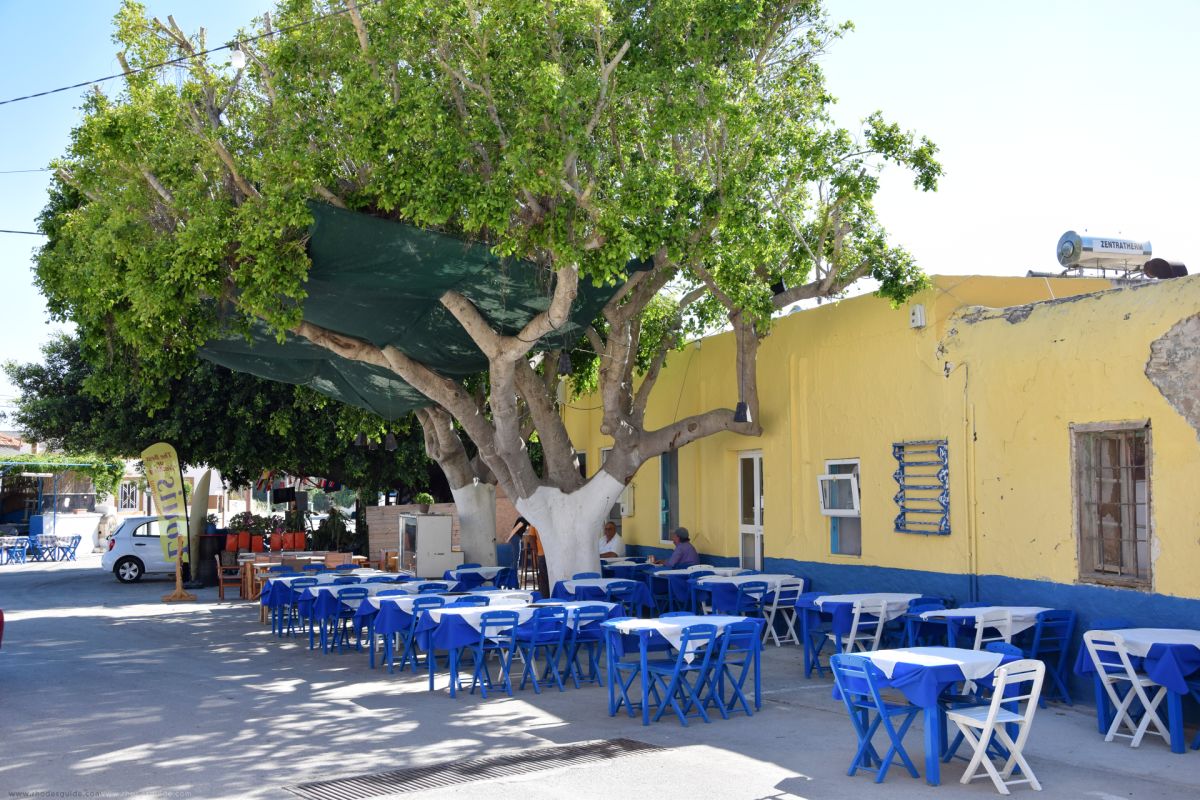 As we left the church, Ianni said he would take me to the hilltop monastery at Skiadi, a few miles away, to show me how the boys from his village spend Easter Saturday night. The monastery means a great deal to his family, as one son from each generation has always gone into the church, with Ianni’s grandfather rising to the rank of Bishop of Skiadi.

The monastery dates from the 14th century, and has housed a holy icon since the 15th, when a heretic stabbed a painting of the Madonna and Child which promptly spurted blood from the wound in the Madonna’s cheek.

We didn’t see the icon that night as the services were over by the time we arrived. Ianni woke up the caretaker who, like the other Greeks I saw, didn’t seem to mind being disturbed in the middle of the night. Well, not on this night, anyway. The caretaker said that the boys from Kattavia had set off home at 11pm, though there were still over 100 men there who had come from every part of Rhodes to spend Easter at the monastery.

We groped our way back in absolute darkness, feeling our way along the monastery walls to the Ford pick-up that Ianni had borrowed, then bumped and pitched back to the village down a road that was like a bomb site. ‘You know what we call this road?’ Ianni asked me. ‘We call it The Road that Kills People. A pity there is no moon as you cannot see over the side and down to the beach. Is beautiful.’

It was around 3am when we arrived back in Kattavia and found half a dozen of Ianni’s friends sitting round drinking Scotch and beer, in one of Greece’s typical ‘sell everything’ shops, and watching what seemed to be interference on an enormous TV. It turned out that we were the interference as we’d interrupted their blue video session. They asked if I’d be offended if they put the film back on.

The French frolics weren’t quite the Greek Easter experience I was expecting, but as Ianni explained, there wasn’t a lot to do in Kattavia. One of the men was poised with his finger on the remote control and switched off at every passing noise from the street, from where the TV was clearly visible. The Gallic gropings and gruntings were ended for good when one of the men saw his parents pull up and park outside, and the flickering figures had hardly faded from the screen when his mother came in carrying a more traditional Greek offering: a pot of Easter soup.

This was our cue to return to Ianni’s parents for a 4am meal of Greek salad, slabs of cheese the size of house bricks, dark local bread, and a bowl of Magaritsa, an egg and lemon soup with rice and heavy with the offal from the lambs whose meat would be roasted for Easter Sunday.

‘OK,’ Ianni said, ‘now we have four hours sleep. Breakfast at eight o’clock. You are sleeping in my grandmother’s house.’ He took me fifty yards or so to the house and marched in, switching on the light to reveal grandmother and a family aunt sleeping head-to-toe in a single bed, leaving the other one free for their unexpected guest.

Although grandma had been told about my overnight visit, she had forgotten by the time she woke up and was more than a little confused on Easter Sunday morning to find a bearded figure sleeping across the room from her.

Breakfast was three fresh fried eggs and the inevitable salad, after which Ianni drove me around to see some of the local beaches. They were easily the most beautiful I’d seen on the island, the more so for being empty of the visitors who were already, in the opening weeks of the season, crowding the two main centres of Rhodes Town and Lindos.

On the three long sweeping beaches we visited we saw no-one but a single Greek family, picnicking and dancing by the side of their battered green van. This was on the beach at Prasonisi, the southernmost tip of Rhodes, the site of a Greek village in pre-Christian times, where Ianni showed me a beautiful floor mosaic he’d found in the scrub behind the beach.

Driving back to Kattavia we passed two roadside shrines side by side, an unusual sight. Ianni told me the story. Two lovers from the village had fallen foul of the Greek law forbidding a man to marry his sister-in-law, and they chose to live together in death at Prasonisi.

In Kattavia a service was in progress outside Ianni’s parents’ house in the village square, and the priest had brought the holy icon down from the monastery. The villagers, mostly in black, formed a half-moon round the priest and the painting, against a backdrop of blue sky and green hills. On the cheek of the Madonna you could see the cut from the heretic’s knife, with brown stains where the blood was said to have flowed. At the end of the service everyone queued to kiss the silvery painting and Ianni paid the priest to have the icon stay overnight in his parents’ house: a blessing and an Easter gift for his mother.

Lunch was barbecued lamb and the sweet red local wine. My plate was piled with large hunks of meat and anything that needed finishing, but my stomach’s relief when the table was finally cleared was short-lived.

‘Now,’ said Ianni, ‘we go to my grandmother’s house. My aunt has cooked a different kind of lamb… come, we must eat there too.’

Must we, I thought, though I somehow expanded to fit in my fourth meal in less than twelve hours – and a bottle of retsina, a milk-sweet pastry and the Greek coffee that had been so hard to find in the more commercial Lindos.

Still, it was back to Lindos we went, stopping only to buy a tub of honey and passing, outside Kattavia, the Turkish community of half-a-dozen houses, of fields, donkeys, children and olive groves.

‘Do you get on with the Turkish people?’ I asked Ianni, as the Greeks and the Turks haven’t always been the easiest of neighbours.

‘Of course, why should we not? They are poor people, like we are. My best friend in Kattavia is the fisherman, Mustapha.’ 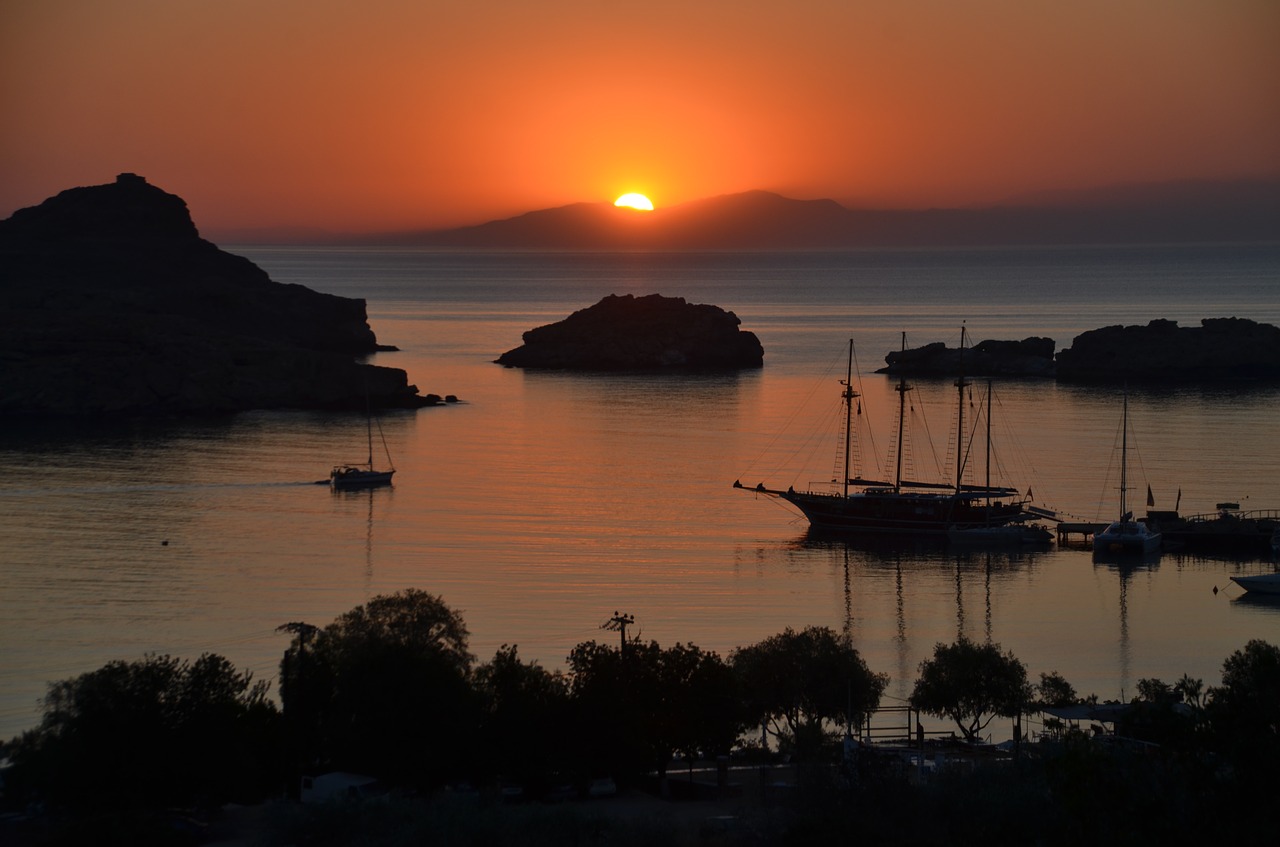 And we drove on to Lindos where, by five o’clock, Ianni was back behind the bar. There were only 170 more days to go until October and the end of the season, when he could return to Kattavia and tend his father’s olive groves all day, and in the evening talk with his friend Mustapha.