This drive exploring northern Evia takes you from the busy town and port of Chalkida, out along the coast road and up into the mountains for a glimpse of life in the rugged and beautiful north of the island. 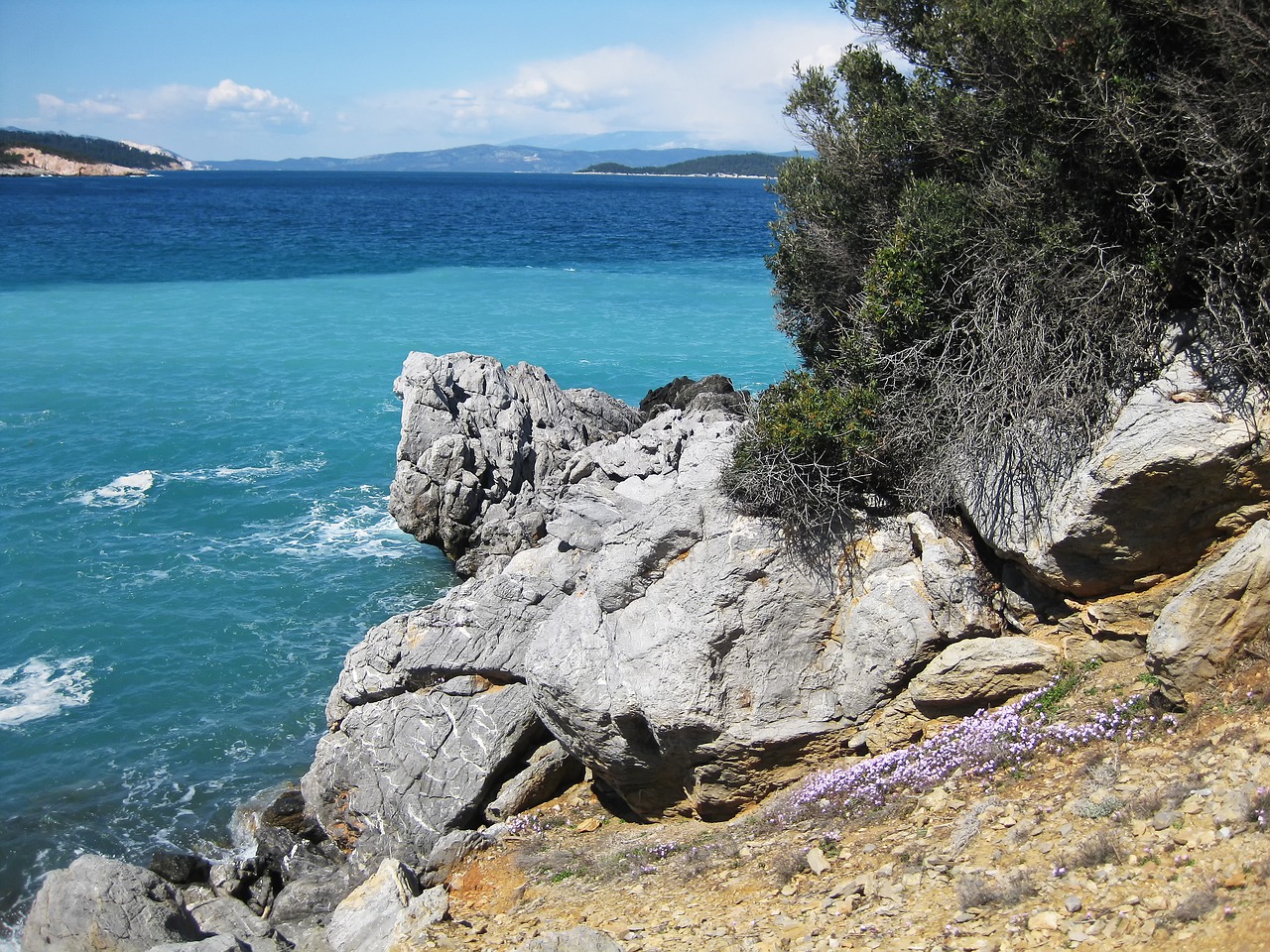 The Rocky Coast of Evia

Assuming that you enter Chalkida from the mainland across the bridge, keep on the main road through the town centre, turning left onto route 44 and then right onto route 77, marked for Mantoudi. Note that when you are outside the main town the road signs are mostly written only in Greek, so you need to be careful to follow directions and at the very least have a copy of the Greek alphabet with you, so that you can hopefully stop and make sense of the Greek placenames.

If asking directions, stress is all-important in the pronunciation of Greek. The stressed syllable is usually the penultimate one, and if you get the stress wrong the listener may not understand, even though you think your pronunciation is reasonably close.

The road north out of Chalkida takes you through some salt marshes and along the coast with lovely views across to the mainland. After about 12km (7.5 miles) look for the right fork on a local road marked for Psakhna, which you reach after 2km (1.2 miles). Psakhna is an attractive market town, worth a brief stop as the main church has some 13th century frescoes.

Continue on from Psakhna by following the signs for Prokopi, which takes you back to route 77 with Prokopi being 30km (18.6 miles) further on. The road to it is a marvellous drive through olive groves and later up into pine forests as the scenery becomes more mountainous. There are now even more spectacular views back to the mainland, as well as vistas over Evia itself, showing how green it is especially in the spring and early summer. For a time the road runs alongside a river, through the narrow and wooded ravine in the Kleisoura Valley, before reaching Prokopi.

Prokopi is an essential stop, a village which built up after the arrival of Greeks forced out of Turkey during the population exchanges in 1923. Its church of Agios Ioannis o Rosos (St John the Russian) contains the bones of that saint, brought from Turkey. Prokopi is also the home of the Candili Centre, a base for arts and crafts holidays, retreats and seminars, based in the estate of Edward Noel, a British relative of Lord Byron. It is worth visiting just to see the house and grounds, even if you have no time to stay and join one of their holidays.

From Prokopi continue on route 77 following the signs for Limni and Mandoudi, which you reach after 8km (5 miles). Mandoudi is a beautiful village of whitewashed houses, about 1km (0.6 miles) off to the right of the main road. Don’t hesitate to take the slight detour to stop off here for a while and relax in its pretty main square.

Go back to route 77 and turn right, continuing on, following the signs for Strofylia and Limni. The road takes you through more agricultural land, past rows of vines, bent under the weight of the grapes in the autumn. In Strofylia the road forks and you follow the left fork, which passes through a few more hill villages until you drop down suddenly towards the pretty little coastal village of Limni where a good seafood lunch or supper awaits.

If you're driving back to Chalkida from Limni, it should take you about 90 minutes without stops.