There are lots of pretty towns and villages to explore on Evia, and here in alphabetical order are some of the places worth seeking out, in addition to Chalkida and Ancient Eretria. 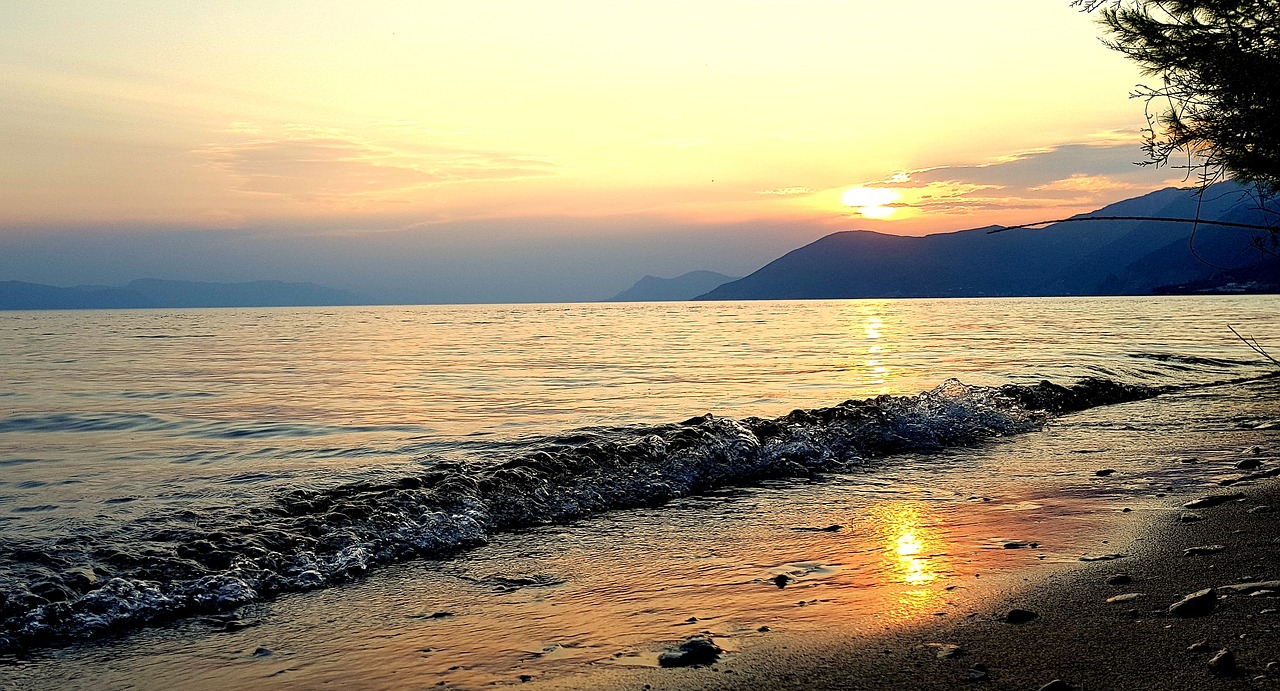 One of the finest exhibits in the National Archaeological Museum in Athens was hauled from the sea here off the northern corner of Evia. The stunning bronze statue of Poseidon was found by local fishermen in 1928, highly appropriate as he was the God of the Sea who lived on Evia. In 480BC the waters here were churned and tossed as it was the site of the Battle of Artemisium, when the Persian fleet of King Xerxes defeated the Greeks before moving on to take Eretria, only to be finally defeated at Marathon. 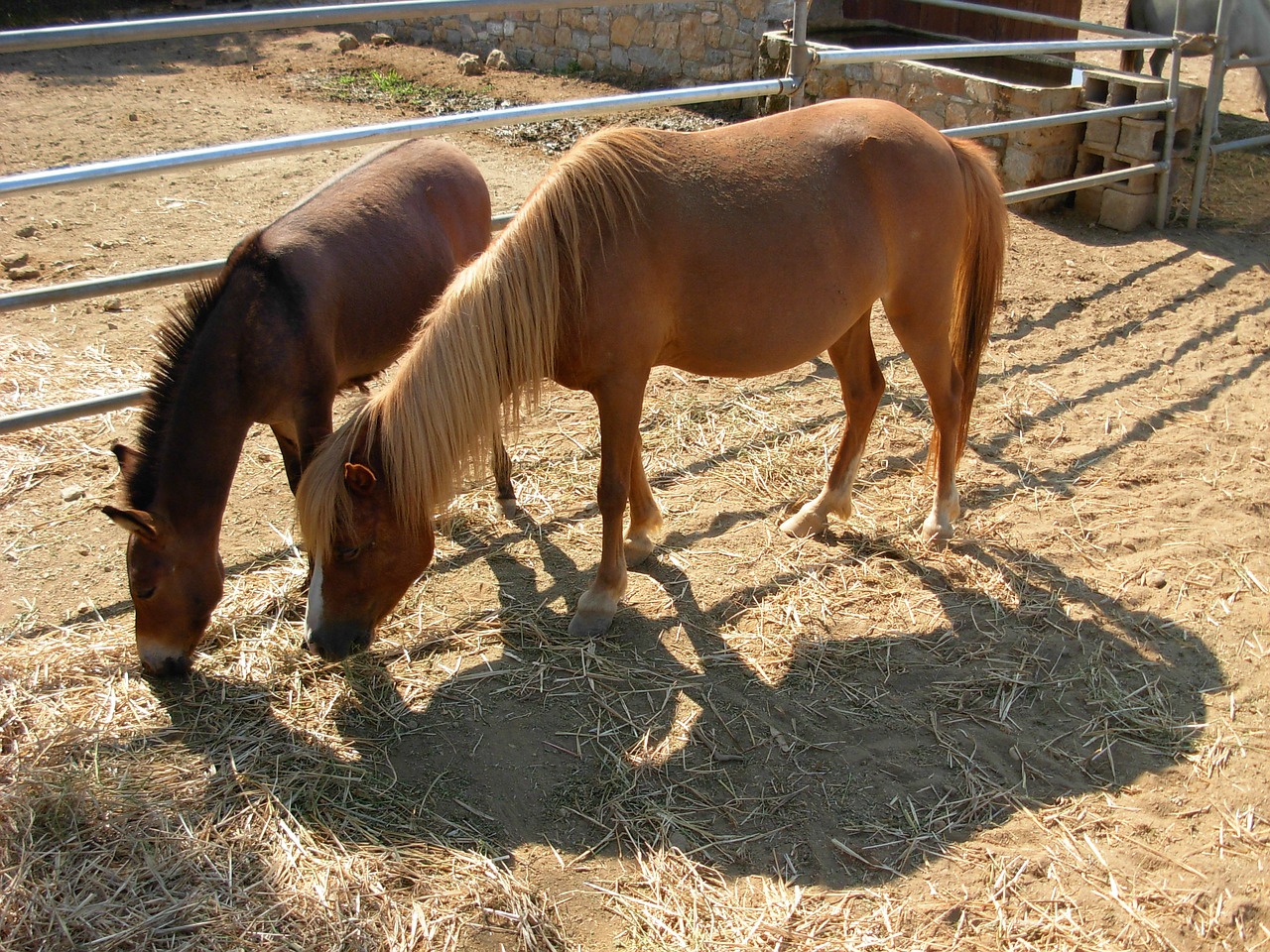 Horses on a Farm on Evia

Almost at the southern tip of Evia, Karystos is an attractive town of mainly modern origin, having been built up only after the War of Independence. The first King of modern Greece, Otto, liked the location so much that he modestly renamed the town after himself, Othonoupolis, decided it would be the new capital of Greece, and invited a Bavarian architect to create a grand town plan of long, wide streets lined with mansions. However, not long after this first stage was completed, Otto was gone and Karystos reclaimed its name and kept the streets. Today it is one of the destination points for the ferries from Rafina on the Greek mainland, making it rather busy, especially in summer, but in an appealing, lively way.

Dominating the town is the Castello Rosso, a massive medieval fortress that looks over modern Karystos from the site of the ancient acropolis. Nothing much remains inside the fortress, which gets it name from its red-coloured walls, but it gives good views back down over the town and further inland to Mt Ochi (see below). Karystos also has an Archaeological Museum worth visiting. 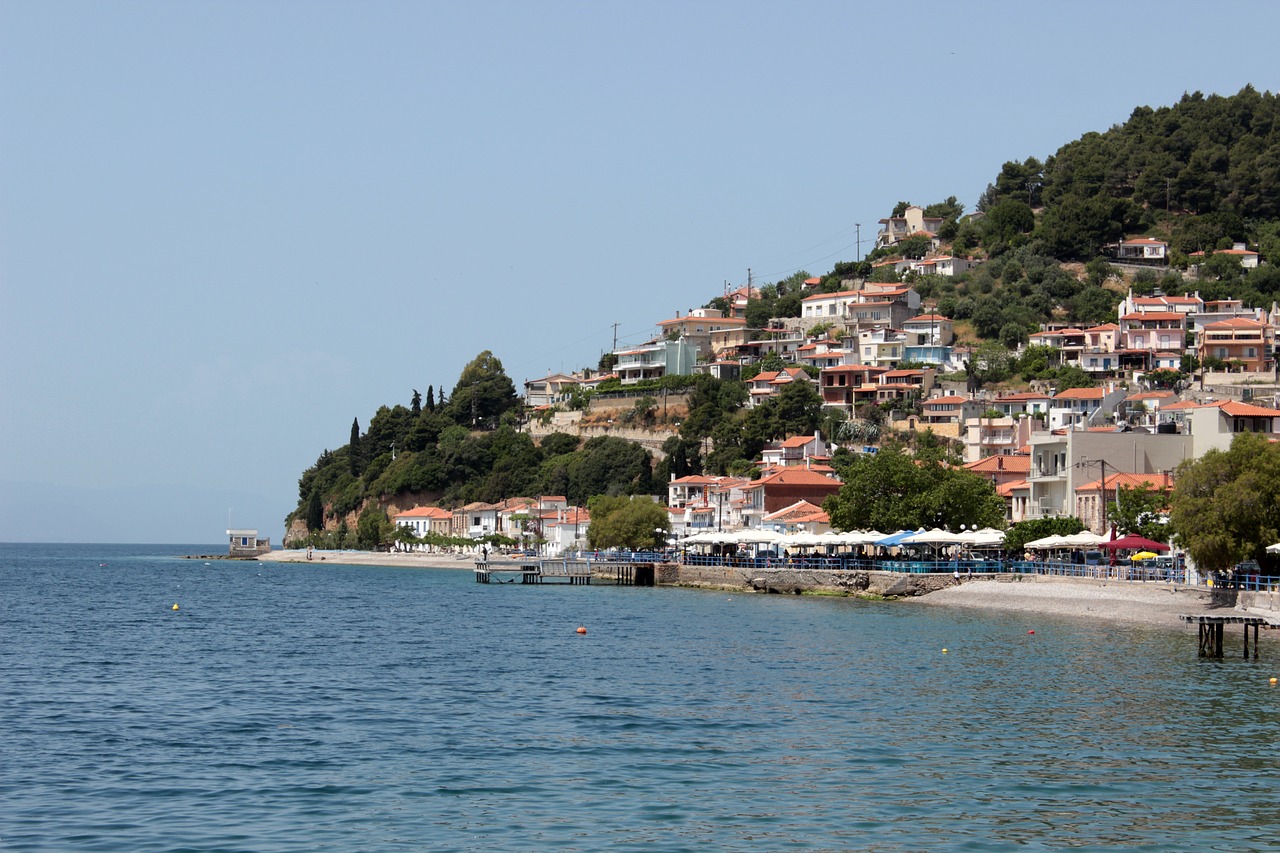 Kymi is a town halfway along Evia’s northern coast. There's a Folklore Museum here, which has fascinating displays on local life. There's an extensive collection of local costumes and embroideries, and much of the fascination comes from a large collection of old photographs showing life in the last century in this quiet rural place, set among vineyards and orchards. Its sleepy nature and remote location belie its rich past, evident from the fine 19th-century mansions which line some of the streets, the wealth coming from a combination of local silk production and international maritime trade. 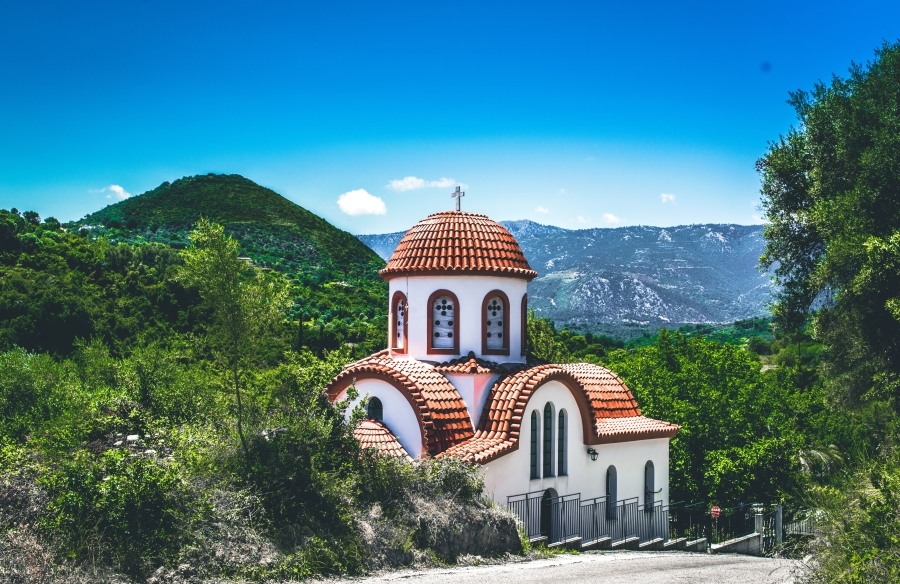 Kymi also has a lovely church dedicated to the Panagia Koimisis, containing a very rare 7th-century icon of the Madonna and Child, while north of the town is the dramatically-situated clifftop monastery of Moni Sotira, built in the 17th century and still inhabited today by a small number of nuns. Note that men are not admitted.

Limni is a fairly quiet fishing village, which is starting to wake up to the tourist trade, but it lacks the good beaches of Loutra Gialtron, Loutra Aidipsou and some other Evia resorts. For the moment, then, it remains a low-key Greek village of whitewashed red-tiled houses, boats bobbing in the harbour, 19th-century mansions built from past maritime wealth, and a relaxing waterfront with cafes and tavernas.

More energetic visitors make the 8km (5 miles) walk to the Byzantine monastery of Moni Galataki, the oldest on Evia, with remains going back to the 13th century though most buildings date from the 16th. Its church has frescoes that also date from the 16th century, several of which have survived in vivid detail, including a Last Judgement so frightening it would turn anyone onto the path of righteousness. The monastery was deserted for many years but reinstated as a convent in the 1940s and is still inhabited by nuns today. There are no formal opening hours but anyone arriving in the mornings or early afternoon will be welcome to look around, if respectably dressed. 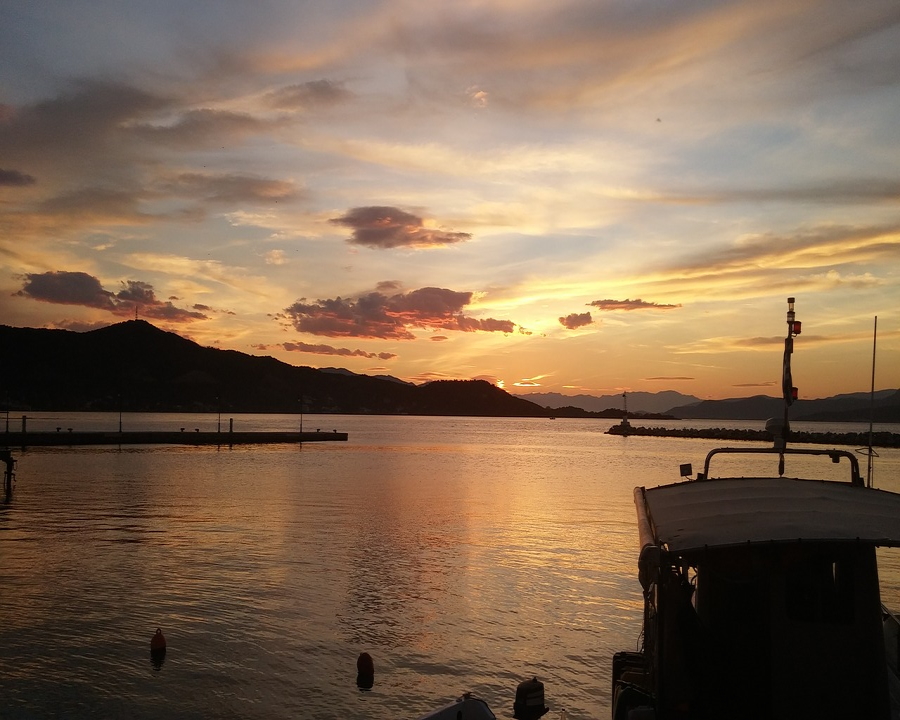 At the remote northwestern end of Evia is a beautiful wide bay surrounded by wooded slopes, with spa resorts sitting on either side of the mouth. The smaller Loutra Gialtron is a pretty harbour town with an old windmill and a decent beach, and with access to even better beaches out towards the extreme northwestern tip of the island.

Across the bay, Loutra Aidipsou is the largest spa town in Greece and renowned for its sulphur springs, bringing visitors flocking here every summer at the prospect of being made young and beautiful. It is not the best time of year to turn up without accommodation booked. At other times, the summer demands of visitors means that there is ample accommodation (many hotels have their own hot springs) and you can enjoy its excellent beach and the picturesque charm of a working fishing harbour, and  the prospect of making day trips to the Sporades.

At 1,398m (4,587ft), Mt Ochi is the highest point in the south of Evia and is surrounded by lovely villages, both inland on its slopes and on the surrounding coasts. A popular hill village is Mýli, which overlooks Karystos near the Castello Rosso and is the setting-off point for those wishing to climb the mountain. This is a serious 4-hour hike, for which you will need to be fit and have a good map or guide, but your rewards will include exceptional views and the sight at the top of one of Evia's so-called Dragon Houses.

These stone buildings are also found near Stýra, and named because it is thought that only dragons could have transported the huge stones to the high locations where the houses are built. Their purpose is not known for sure, but it is thought they may have been miniature temples for the worship of Poseidon, who made Evia his home.

The hill village of Ochthonia is an atmospheric place, its prosperous past hinted at by the Neo-Classical mansions and ruined towers that can be seen as you walk the streets, and by the remains of the Frankish castle above the village. Down below on the coast are long stretches of sandy beach which are rather too remote to attract crowds in large numbers, so are good places to aim for if you like to sunbathe in seclusion.

Prokopi is another mountain village, this one overlooked by the highest point in the north of the island, Mt Kandili (1,361m/4,465ft). Our drive in northern Evia includes Prokopi, where it's well worth breaking the journey. Many pilgrims do so in order to visit the church of Agios Ioannis o Rosos, which contain the remains of St John the Russian, who was in fact a Ukrainian. He served in the Tsar’s army, was captured by the Turks, made a slave and then killed by the Turks in the town of Prokopi in central Turkey. With the exchange of populations in 1923, his devoted followers brought his bones to Greece, and they named their new settlement Prokopi and built a church to house the relics. You may see Russian Orthodox visitors here too, as St John was also canonised by the Russian Orthodox faith in 1962.

The mountain village of Steni has developed into quite a thriving tourist town, brought on by its location at the foot of Evia’s highest point, Mt Dirfys (1,740m/5,709ft). The peak naturally gives breathtaking views over the island, out to the Aegean and back towards the Greek mainland. It is also relatively accessible, provided you are reasonably fit, and it’s a good day out to take the four-hour walk to the summit and enjoy a picnic lunch at the top.

You will need a good map, but the walk begins at the end of the main road that runs through Steni, which peters out into a car park after about 3km (2 miles). Follow the track, watching out for cars as some people prefer to drive up as far as they can go. Look for the turning to the left which is clearly signposted: Fountain of Liri Refuge. From the Refuge another track marked with dabs of red paint on rocks leads in a straightforward if demanding manner to the summit.

On Evia’s west coast the port of Nea Stýra (New Styra) has ferry connections with Rafina on the mainland, and has developed into a small holiday resort especially popular with Athenians, who can reach it very easily. It has a lovely, long sandy beach, which will be packed in midsummer, but at other times it would make a convenient base for a few days.

Climb inland for 5km (3.1 miles) and you reach the hill village of Styra itself, a quiet place most noted for having several examples of Evia’s ‘dragon houses’. These are just outside the town and are thought to date from the 6th century B.C. The fanciful theory that the vast stone blocks must have been transported by dragons is very likely to have had a more prosaic explanation in reality: that the stones were carried by slave labour.