Here are some of the things you’ll see when walking around Irakleio, the capital of Crete, including churches, squares, and the beautiful Venetian Loggia.

The Venetian Loggia in Irakleio

Its name translates as ‘Liberty Square’, and this large open space at the top of Dedalou Street, provides freedom from the sometimes claustrophobic feel of the city.

Traditionally this square was the centre of the city, and though the ring of rushing traffic around the edge has somewhat dampened its appeal, locals still frequent it for an evening stroll. There are shady benches beneath the palms and acacias, and a string of cafés and restaurants alongside.

Áyios Títos sits back from the main road on a lovely square. With its sky-blue ceiling and dome, three-tiered carved wood chandelier and modern stained-glass windows, it has a light, airy feel in contrast to most of the churches you’ll visit on the island. Built during Byzantine times, it was the seat of the Metropolitan (bishop) of Crete. During the Turkish occupation it was converted into a mosque, and was entirely rebuilt following its destruction in an earthquake in 1856.

When the Turkish population left Crete in 1923, it was reconsecrated to the Apostle Titus, Crete’s first bishop. His remains had been kept here for 700 years until the Venetians took them to Venice in 1669. They were returned in 1966, and the saint’s skull now lies in a gold reliquary.

This is Irákleio’s most handsome building after the fortress. Built in 1628 by Francisco Morosini, it was a place of meeting and recreation for the Venetian nobility. Its Palladian style combines Doric order on the lower floor with Ionic on the upper floor.

The ground floor porch, with its elegant arches, is decorated with medallions of famous Cretans. The loggia is part of a larger building with once held the Venetian armoury, and now houses the Town Hall. It stands opposite the Morosini Fountain. 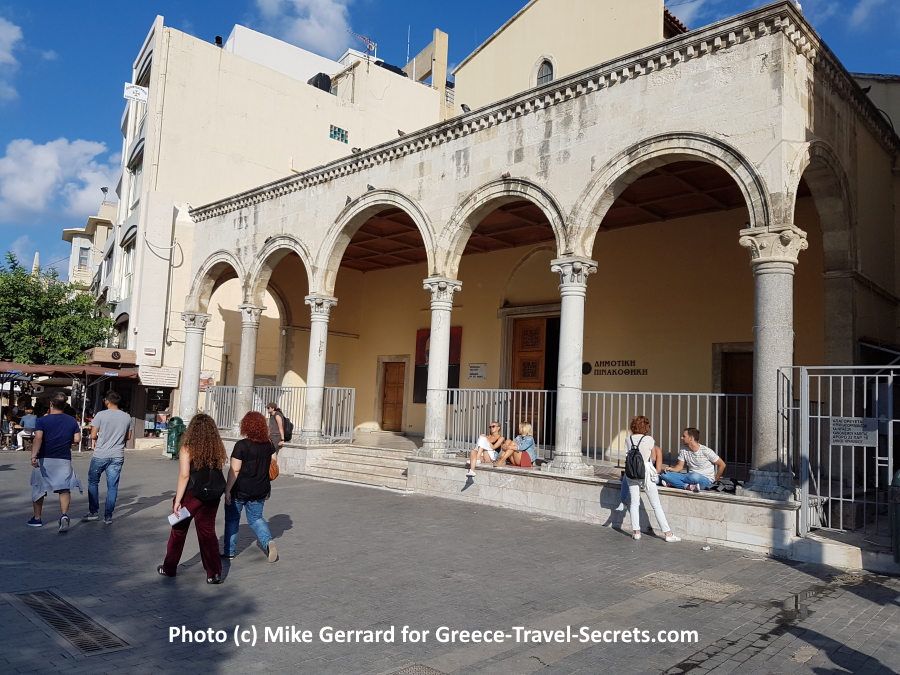 The Church of Ayios Marcos in Irakleio

The Church of St Mark was first built in 1239 and was the church of the Duke, ruler of the island. It became a cathedral in Venetian times and, like most other Irákleio churches, it was converted into a mosque by the Turks. Unlike the others it was not reconsecrated after their departure and in 1923 it became the National Bank.

Now restored to its original form, with a striking colonnaded porch and marble doorway, it is used as a concert hall and art gallery. The arched ceiling, fat pillars and stone walls of the interior make a superb display space for changing exhibitions of contemporary art.

This small central square is one of the liveliest in the capital and a popular focal point for tourists and locals alike. It is named for the great Cretan statesman, Eleftherios Venizelos, who became prime minister of Greece. Also known as Lion Square or Fountain Square, its centrepiece is the Morosini Fountain.

This regal work was built in 1628 by Francisco Morosini, the Venetian governor of the city. A 16 km (9.9 miles) aqueduct brought water from the mountains to the fountain. The four stone lions supporting the central basin have great character and are even older; dating to the 14th century, they are thought to have come from another fountain. The curvaceous marble base is decorated with marine carvings of mermaids, tritons and other figures.

The square has plenty of cafés and restaurants where you can have a coffee, an ice cream or the custard-filled Cretan speciality, bougátsa. It’s a perfect vantage point on the passing scene, but if you prefer a quieter retreat try the adjacent El Greco Park, behind the yellow sub-post office. It has pretty gardens and a children’s playground at one end.

Irákleio’s street market ends at Platia Kornarou. This small, quiet square is a pleasant place to stop for a break. The stone kiosk in the centre, which once housed a Turkish fountain, has been converted into a small café.

Beside it is the Bembo Fountain, named after the Venetian commander Zanne Matteo Bembo, who first supplied the town with running water. It was erected in 1588 and incorporates the torso of a Roman statue from Ierápetra.