Where is Irakleio’s Historical Museum?

If you walk west along the waterfront from the Venetian Port you will reach Irakleio’s Historical Museum in about five minutes. It’s on the left in a handsome neoclassical building dating from 1903. 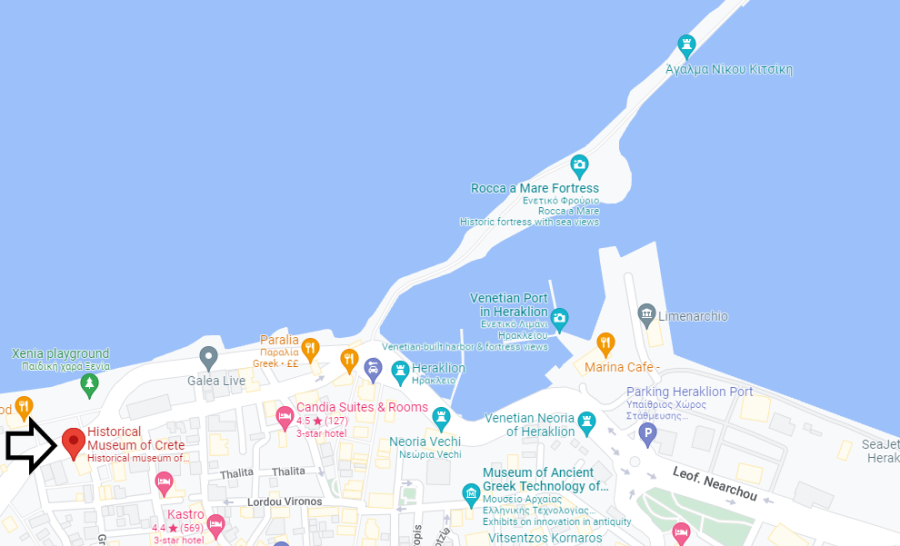 For an overview of the history of both Crete and Irákleio, a visit to this small but informative museum is a must. Highlights include the study of Nikos Kazantzakis and the only work by El Greco still on his native island.

At the ticket desk be sure to pick up one of the leaflets, available in Greek, English or German, which gives a map of the museum and a brief note of what is in each room. Most of the displays also have information displays in both Greek and English, although on some the details given are fairly basic.

In the first room, to your right as you enter, the information panels are anything but basic. They cover in some detail four of the major periods in Crete’s history, and correspond to four shelves of objects from those periods: the First Byzantine (330-827/8), the Arab Occupation (827/8-961), the Second Byzantine (961-1204) and Venetian Rule (1204-1669.

The major display in this room is a wonderful 1:500 scale model of Irakleio in 1645, when it was known as Chandax. This is the name given to the city when the Arabs made it the island capital in the early 9th century, possibly from the Arabic words Rabdh el-Khandaq, the Fortress of the Moat. On the walls beside it maps show the development of the city over the years, and note the buttons beneath the displays which illuminate the relevant parts of the model.

Slightly overshadowed by the other displays in the first room are some cabinets in the centre containing objects, including fascinating glass and clay hand grenades, found on a galleon that sank in 1669.

The museum tour continues behind the ticket desk, with the rooms spread on several levels. Room 2 is the Ceramics Room and has some beautiful bowls and plates imported from Italy during the Venetian period. These are cleverly displayed side-by-side with locally-made pottery from the same period, clearly showing the Italian influence on local designs. There are also some lovely, delicate jugs and bowls from the Arab Occupation of the island.

The rest of the ground floor has several rooms containing Byzantine items, Venetian coats of arms and carvings (note the fountain from a 17th-century Palazzo in Room 6), with stairs leading up to the second level.

The highlight of Level B is undoubtedly the small dimly-lit room containing El Greco’s painting of the Monastery of St Catherine beneath Mount Sinai in Egypt’s Sinai Desert. This, his only work to remain on Crete, was painted in 1570 and some background to the work is given in extracts from books about it which are also on display.

Elsewhere on this floor are several icons from the Cretan school, the more typical style of Greek art, and at the rear one room is given over to the struggle for independence against the Turks.

Don't miss our page about our meeting with a modern-day icon painter on Crete.

The major display on Level C is the writer Nikos Kazantzakis’s study from when he lived in Antibes 1948-57, complete with manuscripts of his works, his library of books, and copies of his own books translated into many languages around the world.

The Emmanuel Tsouderos room, opposite the Nikos Kazantzakis room, is unlikely to appeal unless you have a deep interest in Greek politics.

The museum’s top floor contains a folklore collection based on the theme of the life cycle of birth, marriage and death. The museum has a fine collection of weavings, embroidery, old costumes, household items, musical instruments and many other objects.