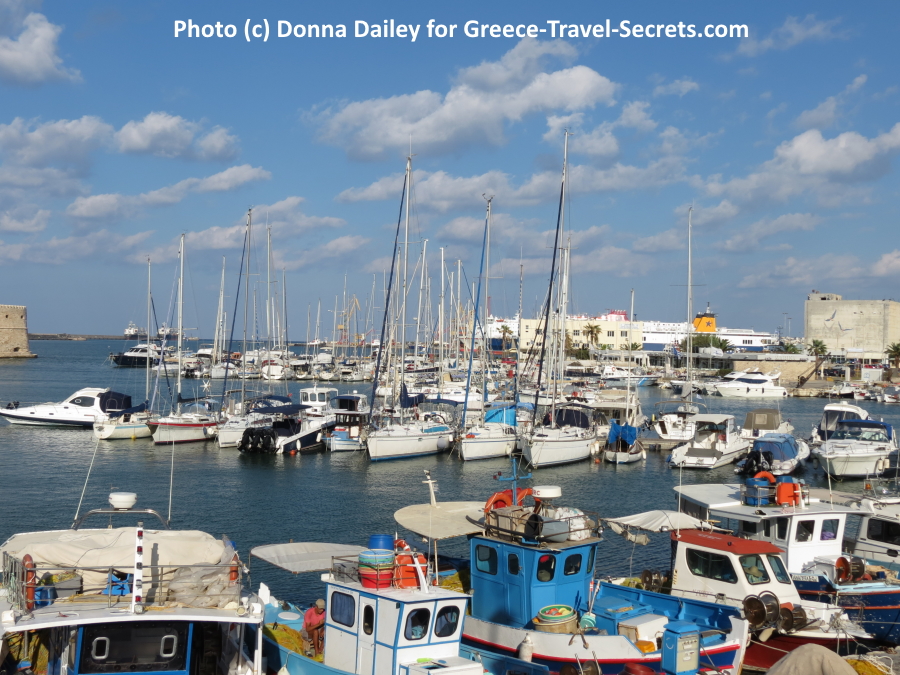 Dust and noise are the two words most often used in describing Irakleio, which does have its share of both: hardly surprising in what is the fifth largest city in Greece. It does also have lots of attractions, and no one should write it off on account of first impressions, which may not be favourable. In this it is like Athens, which it takes time to get to know.

Irakleio suffered very badly from bomb damage during World War II and so does have a lot of unappealing modern concrete buildings, but it also has great character. We love wandering the streets and spending time around the harbour, watching the fishermen bring in their catches or mending their nets. 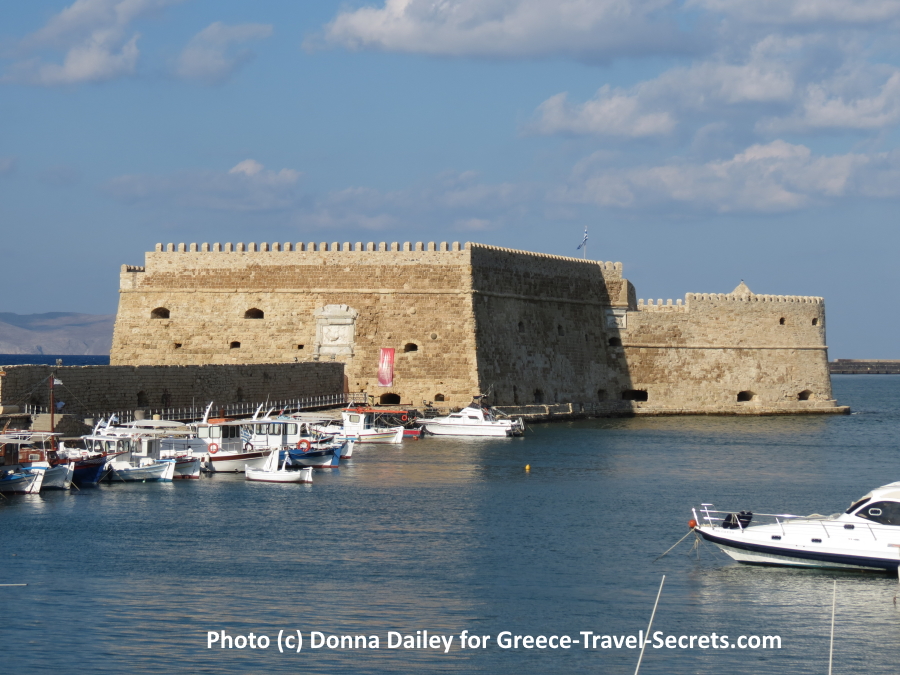 Irakleio has been settled since Neolithic times, and it flourished as the harbour for the Minoan centre at Knossos 5km to the south. It was conquered by the Venetians in the 13th century, and they made it their capital for the Aegean, building a fort to protect the harbour in 1303. The fort that stands there today dates from the 16th century, after the first was destroyed in an earthquake, and it played an important role in the city’s history. 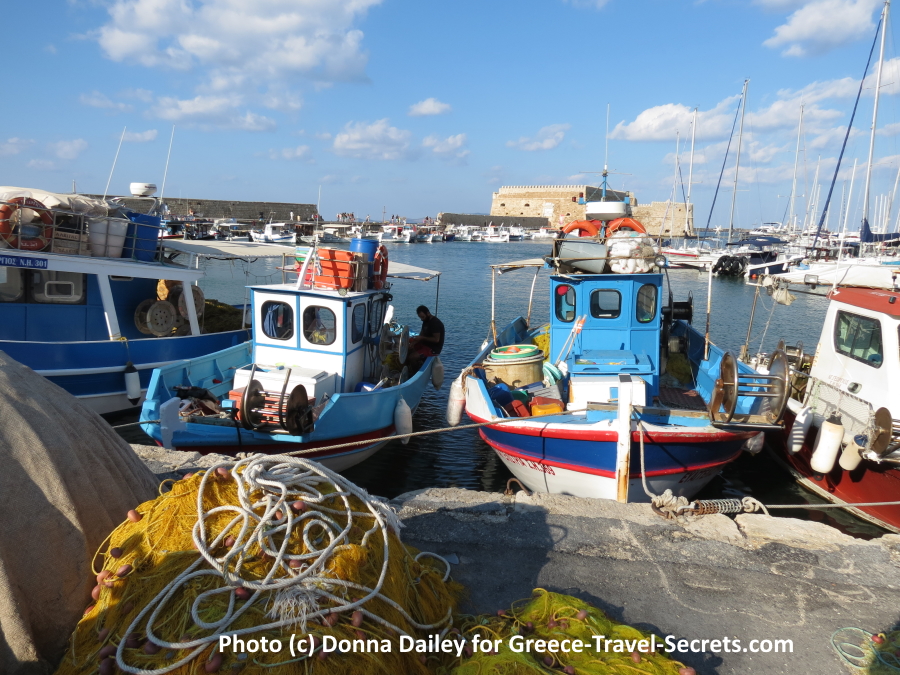 Fishing Boats in The Harbour

It was the focal point when the entire city was placed under siege by the Turks in 1647, a siege which was to last until 1669, when the Venetians were finally forced to surrender their Aegean capital, and the rest of Crete, to the Turks. It is said that 30,000 Cretan and Venetian residents of the city lost their lives, and so too did 118,000 Turks, giving some idea of the ferocity with which the city inside its walls was defended. 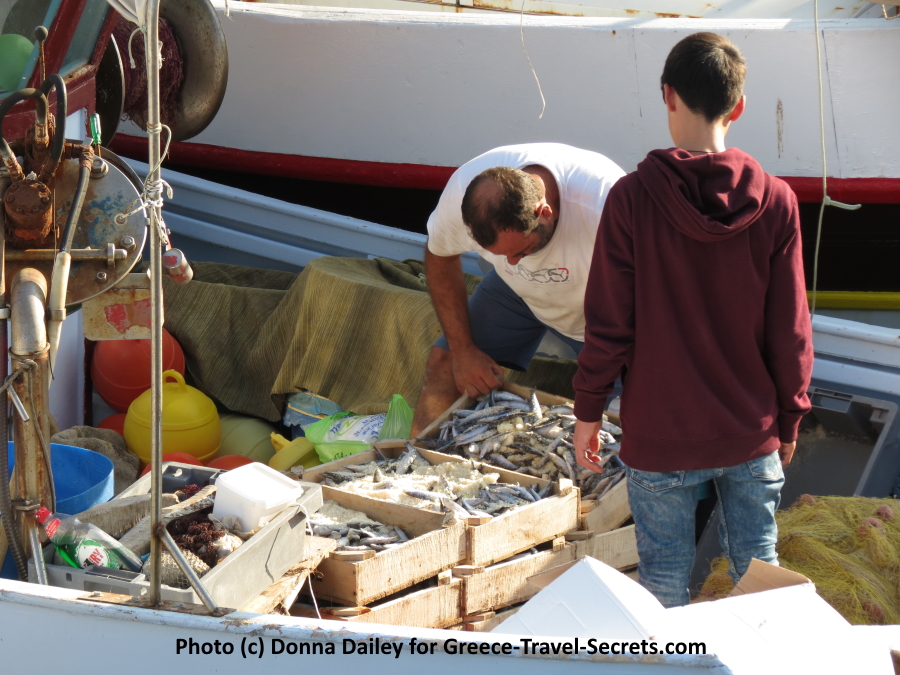 Checking the Catch of the Day

The Arsenal and City Walls

Alongside the harbour is another Venetian structure, the Arsenal, constructed in the 16th century as the place where the shipping fleet for the Aegean was both built and repaired. From the same period are Irakleio’s magnificent city walls, which run for 3km (1.9 miles) around the old part of the town and which it is possible to follow for their whole length, passing several impressive gates such as the Porta Kenouria, where the walls are 18m (59ft) high and 40m (131ft) thick. By the Martinengo Bastion at the southernmost corner of the walls is the grave of Nikos Kazantzakis, who died in 1957 and asked to be buried on this spot.

The Grave of Nikos Kazantzakis

One of Irakleio’s undoubted highlights is the Archaeological Museum, hardly surprising given the rich finds that have been made all over this large and historically significant island. Most of them have ended up on display here, and it is an immense collection that warrants devoting some time to, perhaps even two short visits instead of one longer one. See our very lengthy page on Irakleio's Archaeological Museum.

The rooms are arranged roughly in chronological order, and good guides and plans are on sale at the entrance. If you have limited time then be sure not to miss the Town Mosaic, which goes back to the Old Palace period (2000-1700 BC), and the breathtaking Hall of Frescoes. These Minoan frescoes are both historically fascinating and artistically superb, but the whole collection provides a deeper insight into the sophisticated and powerful Minoan civilisation. Another highlight is the Phaistos Disc.

The museum is close to Plateia Eleftherias (Liberty Square), which is very much the heart of Irakleio. It’s a busy traffic hub day or night, but pedestrianised and tree-shaded in the centre, which really comes alive in the evenings when the bars and restaurants open and half the city seems to congregate here for the evening volta, or stroll. 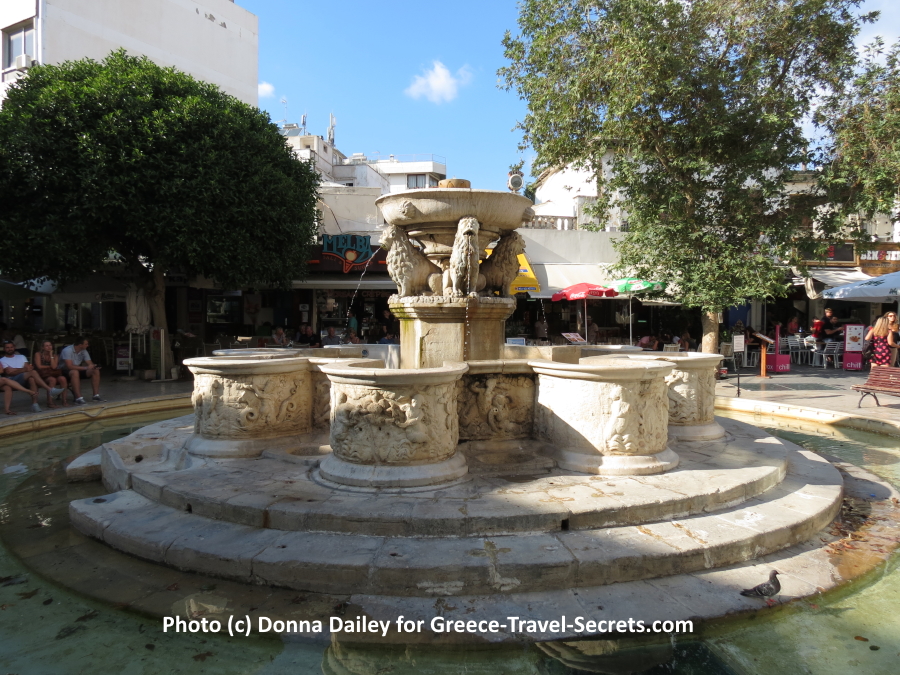 It is only a short stroll from Plateia Eleftherias to the city’s other main square, Plateia Venizelou, also known by its unofficial name of Fountain Square. The fountain in question was originally built in the 17th century by the Venetian governor of the time, Francesco Morosini, and has been restored to its full glory.

Nearby is one of the city’s other squares, Plateia Kallergon, besides which is the Loggia. This beautiful 17th-century building was originally a meeting place for the Cretan nobility and has been lovingly restored and now serves as the city hall. The square also has a Turkish fountain, and if you need some respite from the traffic-filled streets then also just off this square is the El Greco Park, which also offers some shade against the heat of the day. 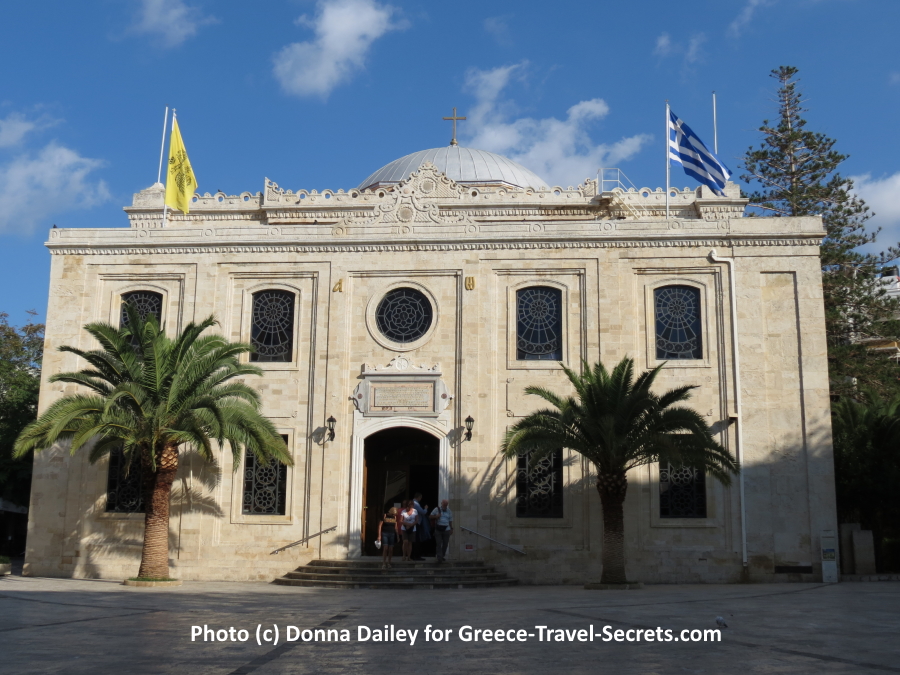 Behind the Loggia is the church of Agios Titos, which was originally built in the 16th century and dedicated to the island’s patron saint who brought Christianity to Crete. It contains the saint’s relics and is therefore a significant holy place to Cretans, to be treated with respect.

From Plateia Venizelou, Chandakos leads towards the waterfront and, just to the right, the Historical Museum of Crete. This is not as impressive in scale as the Archaeological Museum, but well worth seeing to get a picture of Cretan life through to today. There are plenty of examples of works of art from the Venetian period, as well as a good collection of Byzantine art.  See our full page on Irakleio's Historical Museum.

The Monastery of Saint Catherine on Mount Sinai

The highlight, however, is the only painting by El Greco (1541-1614) to be found on the island where he was born. The Monastery of Saint Catherine on Mount Sinai warrants its own room and a reverential display, and is a powerful work that was painted in about 1570 and shows the Byzantine influences that preceded his influence by Titian. The work is also referred to by several different titles, including The Landscape of the Gods-Trodden Mount Sinai and View of Mt Sinai and the Monastery of St Catherine.

The Battle of Crete

No museum on the history of Crete could ignore the events of World War II and in particular the Battle of Crete. The Historical Museum tells the full story of the suffering on the island in sometimes shocking detail, illustrated with contemporary photographs. See also our own page on The Battle of Crete.

Another fascinating glimpse of more contemporary Cretan life is given in a reconstruction of the study of Nikos Kazantzakis, indicating the esteem in which he is held on his native island. 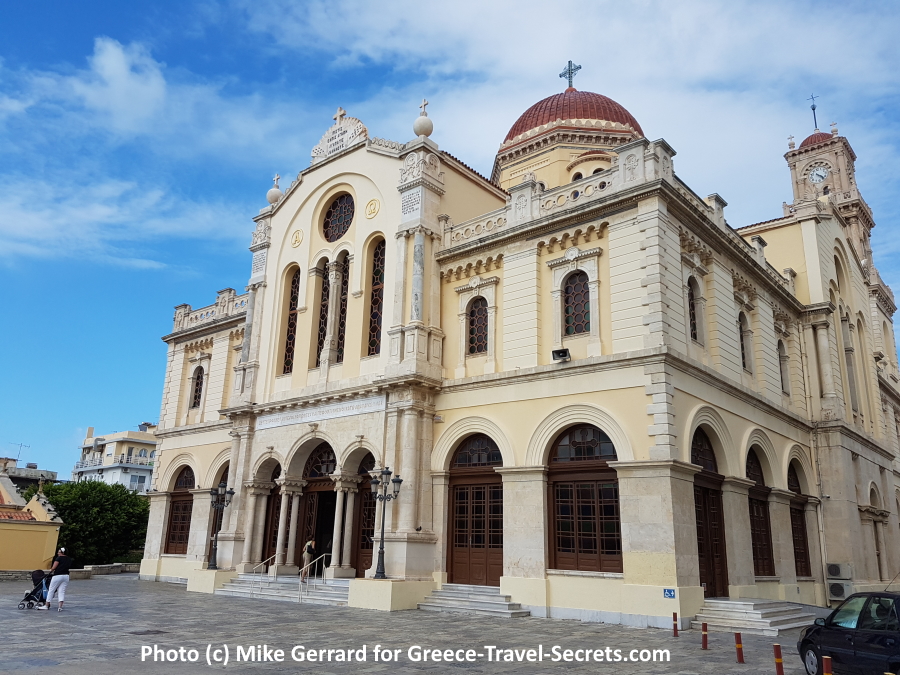 Irakleio boasts other museums worth seeing if time allows, including the Museum of Christian Art and the Museum of Natural History. The former is appropriately situated next to the city’s 19th-century cathedral of Agios Minas and contains an extensive collection not just of Byzantine icons and frescoes but fine examples of religious manuscripts too.

The building itself is equally notable, being a 16th-century church built by the Venetians in honour of St Catherine, the same saint for whom the monastery beneath Mt Sinai is named. This church too was originally a monastery, which was renowned as a centre for art and learning and is where El Greco studied. See our full page on Irakleio's Icon Museum. 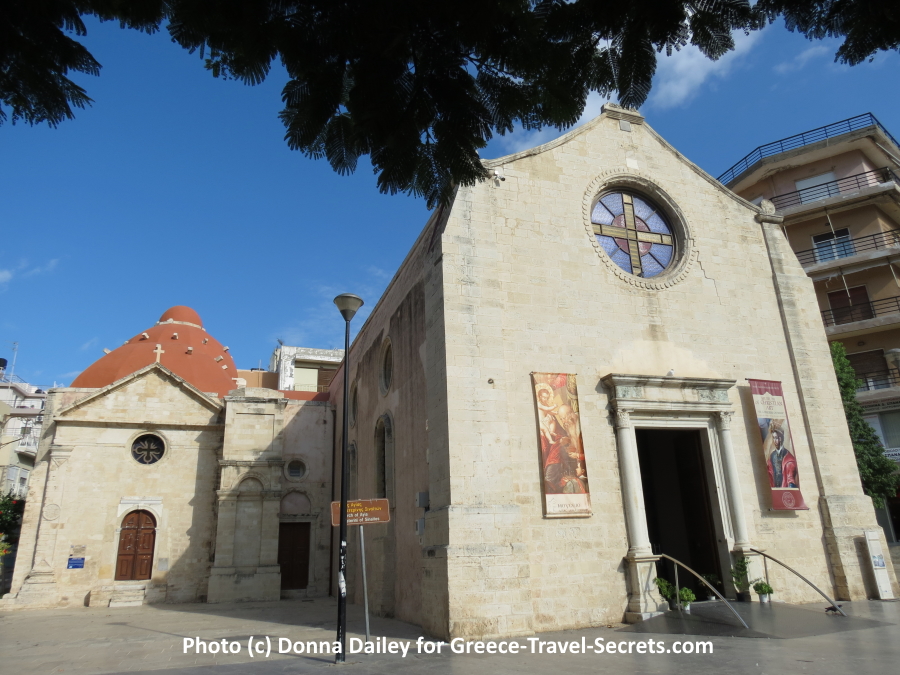 The Museum of Natural History has good displays on the flora and fauna not just of Crete, which is incredibly well-blessed in this respect, but of the Aegean Sea too. 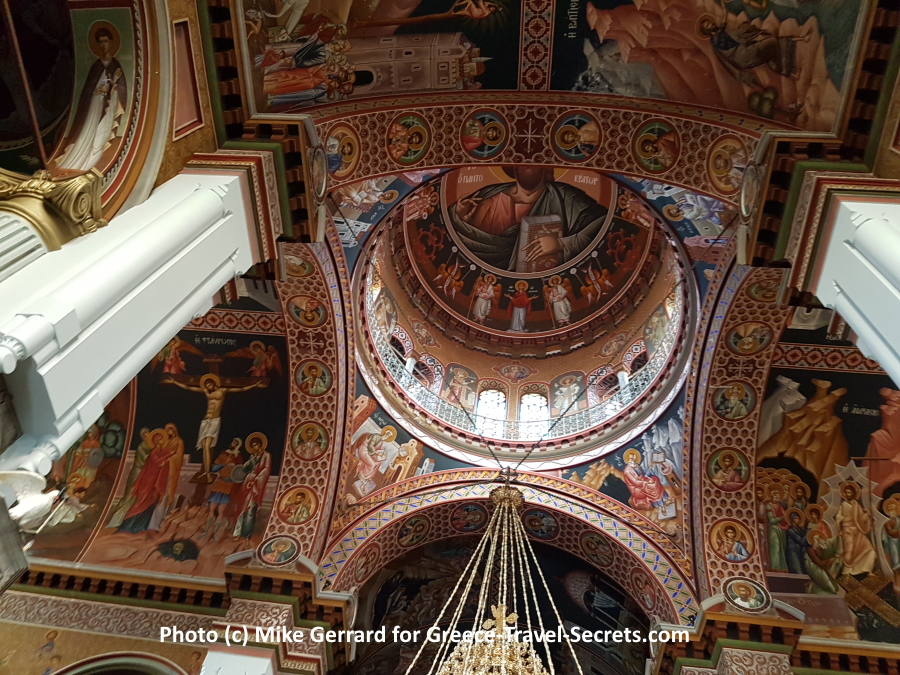 
Where to Stay in Irakleio