Visiting the archaeological site of Knossos is definitely one of the best things to do on Crete.

The Royal Minoan Palace at Knossos was built on a vast scale, with over 1200 rooms, and it remains the prime tourist attraction on Crete. For that reason, give a little prior thought to planning your visit if your time is flexible. The huge crowds that descend here every day throughout the summer, combined with the frequent intense heat, can mar what ought to be a stimulating visit.

When to Visit Knossos

It is far better to try to be at the site, which is easily accessible by bus or by taxi from Iraklion, either at the very start of the day, or in the early evening (in summer the site remains open until sunset.) Mid-day can also be quieter, when the large group tours go off and have lunch. You should also arm yourself with plenty of water and a good map of the site.

The History of Knossos

What you see today are far from being the oldest buildings at Knossos, which was first settled in Neolithic times, about 6000 BC Even the first palace on the site has been dated to 2000 BC, though this was destroyed in an earthquake that took place in about 1700 BC. The present palace is what was rebuilt after that earthquake, and survived until 1380 BC when it too was destroyed, this time by fire.

At its height, and when the Minoan civilisation was at its most powerful, it is estimated that there would have been at least 100,000 people living in and around the palace. The site is so vast, covering 75 hectares in all, that only a part of it is open to the public with many more discoveries still to be made. 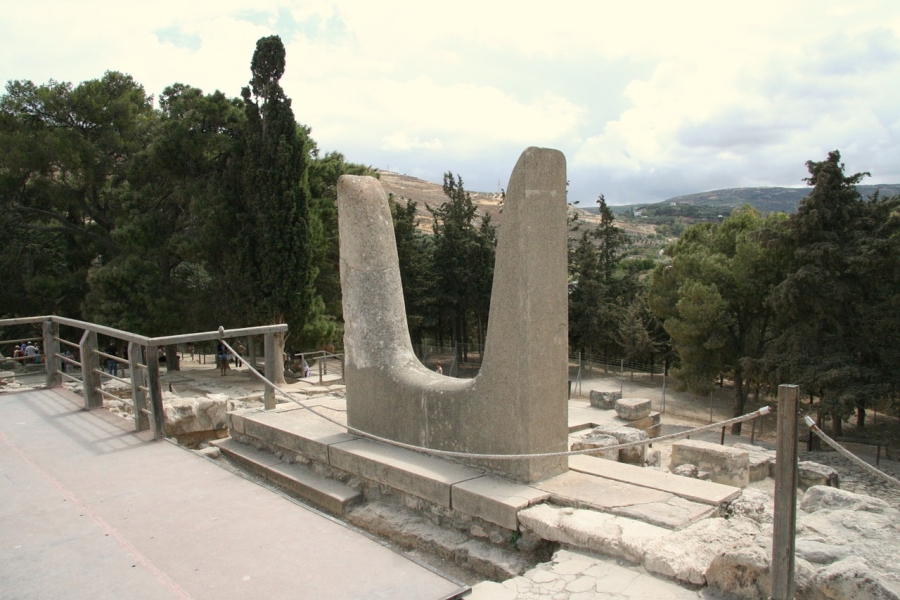 It is a confusing site, and you need to be patient and a little imaginative to make the most of a visit. The confusion may well be connected with the fact that the legend of the Minotaur and the Labyrinth came from here, where the wife of King Minos gave birth to the beast that had the head of a bull on the body of a man. Minos confined the Minotaur (which means ‘Bull of Minos’) to a labyrinth from which it could not escape, and he fed it from time to time with human sacrifices.

For a long time it was thought that King Minos was just a legend too, until Sir Arthur Evans found the Minoan Palace. In fact the name labyrinth derives from the word labrys, which is a double-headed axe that was a Minoan symbol.

When you enter the site you pass a bust of the archaeologist who did so much work at Knossos, Sir Arthur Evans, and behind this are three large pits, probably used for storing grain. As you progress further into the site you will see on the right one of the famous symbols of Knossos, the Horns of Consecration.

These have been restored and naturally represent the horns of the sacred bull that would originally have stood at the very top of the palace itself. To the left of the main path almost opposite here are some steps which lead up to the piano nobile or upper floor, where there are the remains of some shrines and good views down over much of the site. 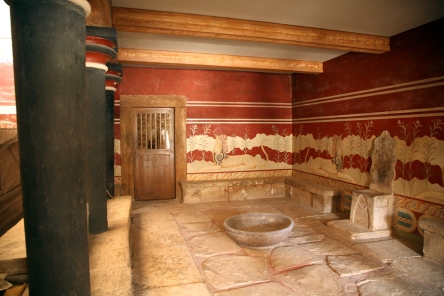 In this area is the Throne Room, which was in a state of some turmoil when Evans discovered it, leading him to speculate that some significant final event had occurred here, coinciding with the destruction of the palace. In one room is a copy of the original throne, said by Evans to be the oldest known throne in the world, and all around it is a wonderful restored fresco showing several griffins, another sacred symbol to the Minoans. Evans’s reconstruction and restoration work is still the subject of controversy, but it is fascinating to be able to see some of the palace rooms in their probable original state.

Waterworks
A drainage system of terracotta pipes ran below the palace and incorporated a means to stop or control the flow of water that was ingenious for its time. You can still see parts of this system under grilles and around the edges of the Royal Chambers. 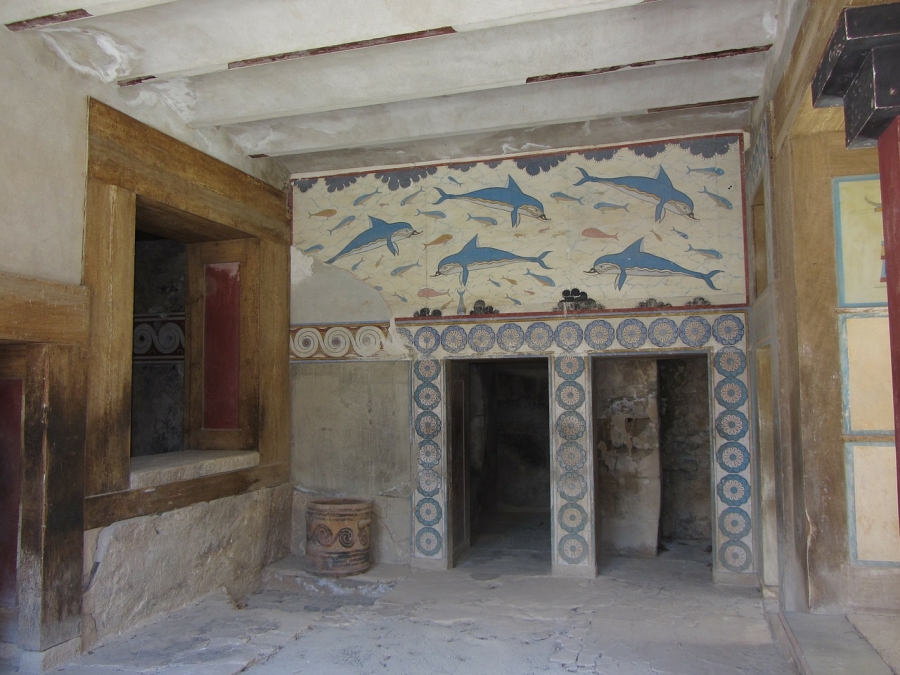 There are many more frescoes around the site, some restored and some replicas when the original has been removed for safekeeping or display in the Archaeological Museum in Iraklion. One highlight is the Priest-King Fresco, which is just beyond the Horns of Consecration.

In the centre of the site is the large, open central courtyard, and beyond this are the main parts of the palace, including the royal apartments. Here the King and Queen lived in some splendour, and the Queen’s Megaron, or Hall, is decorated with a replica of another of Knossos’s highlights, the vivid dolphin fresco.

The site of Knossos is about 5kms (3 miles) south of Iraklion, and you can drive there in about 10-15 minutes. If you’re staying in or near Iraklion you can easily get there by taxi. You can either arrange to be picked up again later in the day or, if you don’t want to be tied to a time, you can find taxis at Knossos as people are always coming and going.

If you're driving to Knossos, it is easiest to use one of the several pay-parking areas either just before Knossos or just after the main entrance. If you try to find free parking you will have a long walk to the site.

You can also get there by bus from Iraklion, and there are numerous organised excursions which include Knossos from most of the main tourist towns on Crete.

The archaeological site at Knossos is normally open every day in summer from about 8am to 7pm (closes 3pm on Sundays). Winter hours from November to March are usually 8am-3pm daily. However, these hours can change so always check locally if planning a visit. There is a modest admission fee.

The summer heat is intense and there is little shade, so bring water and a sun hat.

Allow two hours to see the highlights, more if it is very crowded.

There are a number of tavernas lining the road outside Knossos, most of which are touristy and unremarkable. 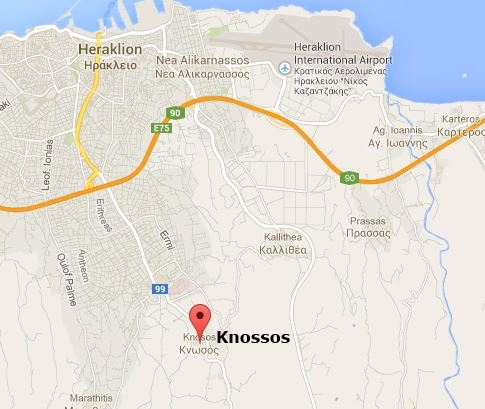