The Snails House in Plouti near Phaistos in southern Crete serves the Cretan delicacy of snails, cooked in several different ways. 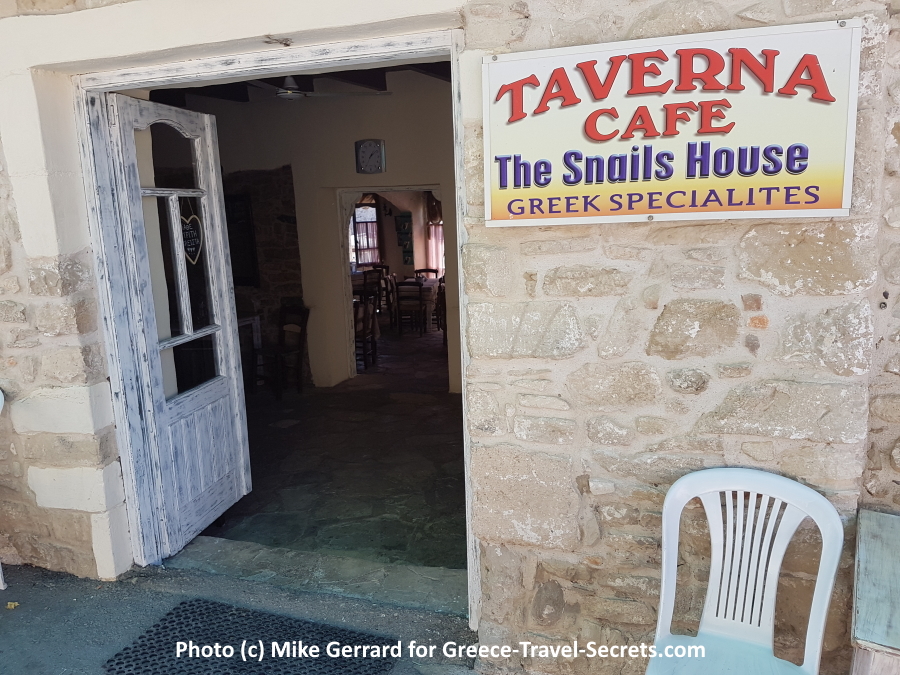 'Snails are the friends of Cretans. We love them. We ate them during the war.' That's what we'd been told by our guide on our visit to the Lyrarakis Winery a few days earlier, where literally thousands of snails were clinging to bushes near their vines. Fortunately snails don't seem to like vines. 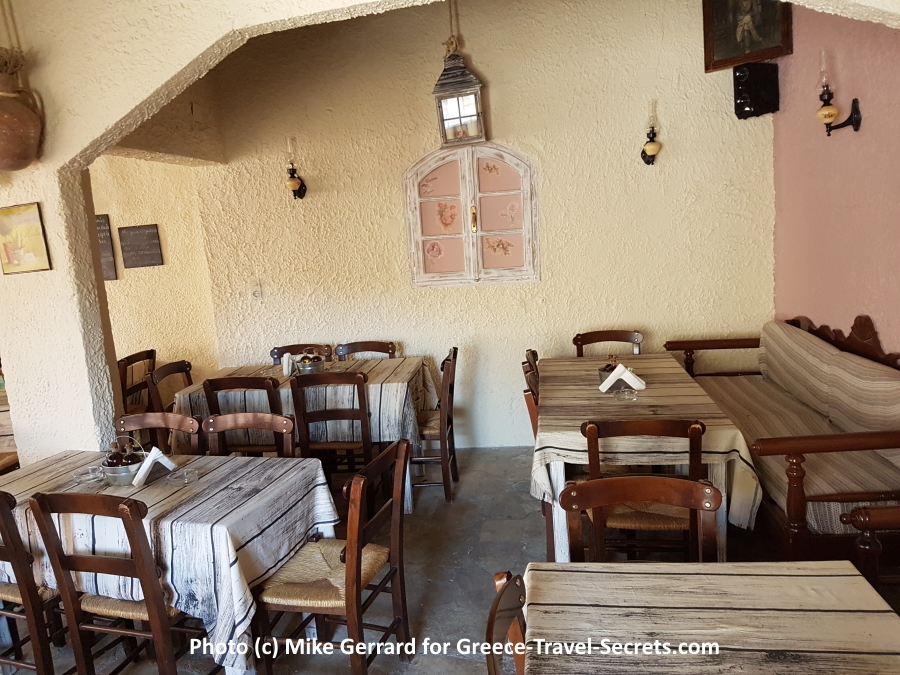 Cretans like snails, though, probably even more than the French love their escargots. Besides - but be careful where you say it - the French actually import some of their snails from Greece. That French escargot in Paris might actually be a Greek koklias from Lake Pamvotis, where there's a healthy snail export business. 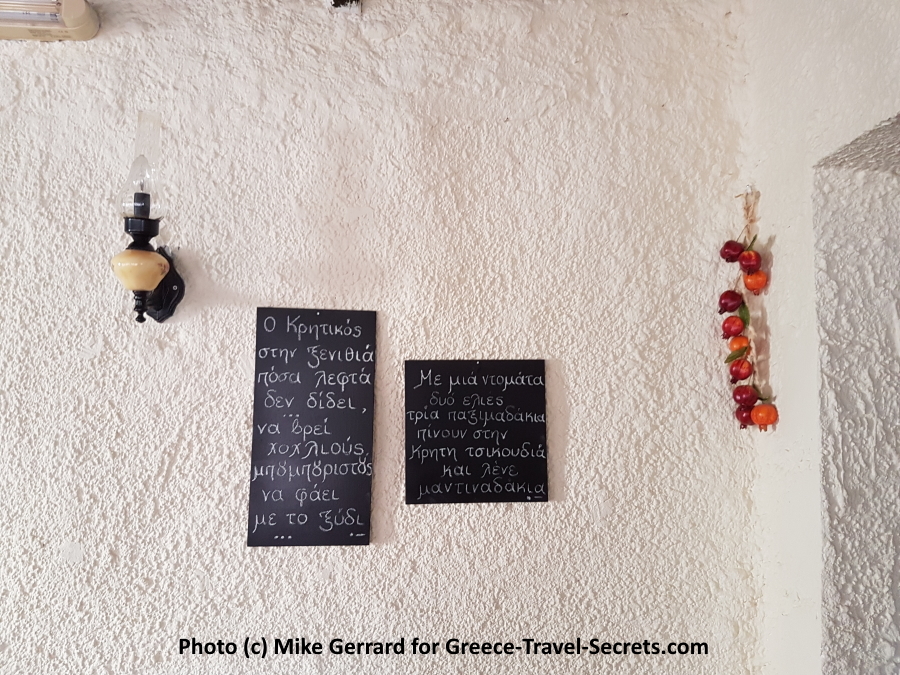 The Cretans certainly cook snails in far more inventive ways than the French do, as we were about to discover when we sat down for an unusual lunch at To Steki tou Kokliou, or The House of Snails in Plouti. 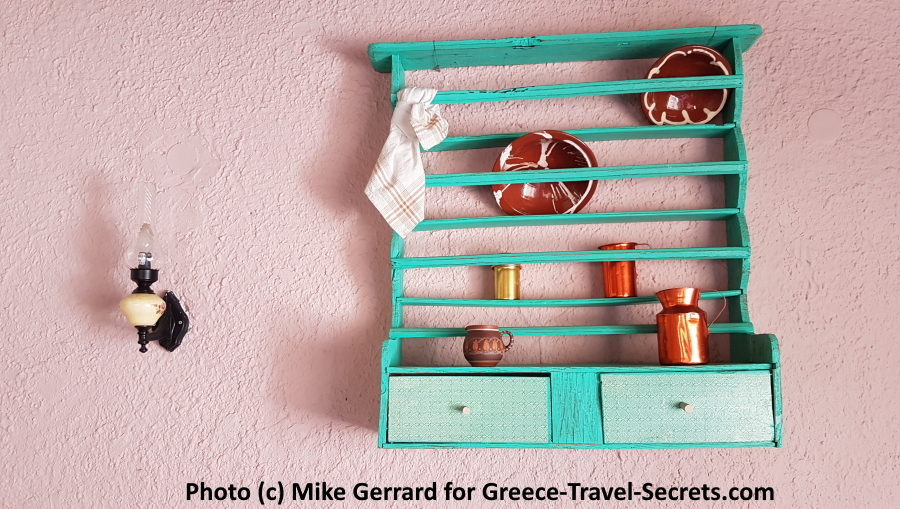 As you can see from the many photos we took, The House of Snails is charmingly and quirkily decorated with lots of rustic touches. On one window shutter there were plants and herbs including lavender, rosemary and oregano, all growing from what looked like old jam jars. A gnarled olive tree branch was draped over a fireplace, and colourful copper jugs contrasted with faded old photos. 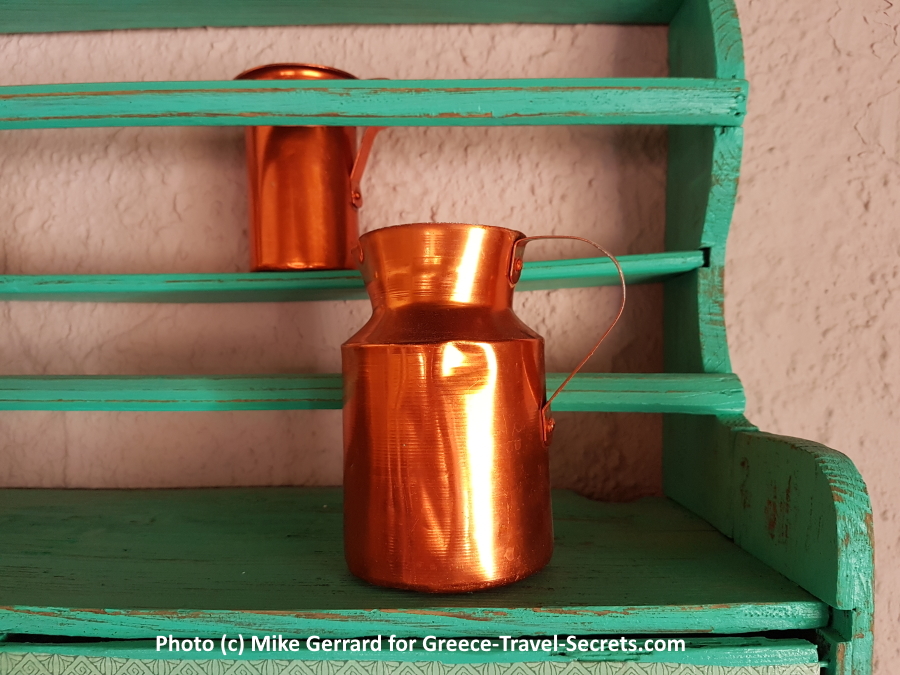 We had plenty of time to look around as, due to our schedule, we'd arrived at noon just as the place was getting their lunch dishes ready, though the cooking smells from the absolutely tiny kitchen made us instantly hungry. I guess you don't need a lot of cooking space if you mainly cook snails. 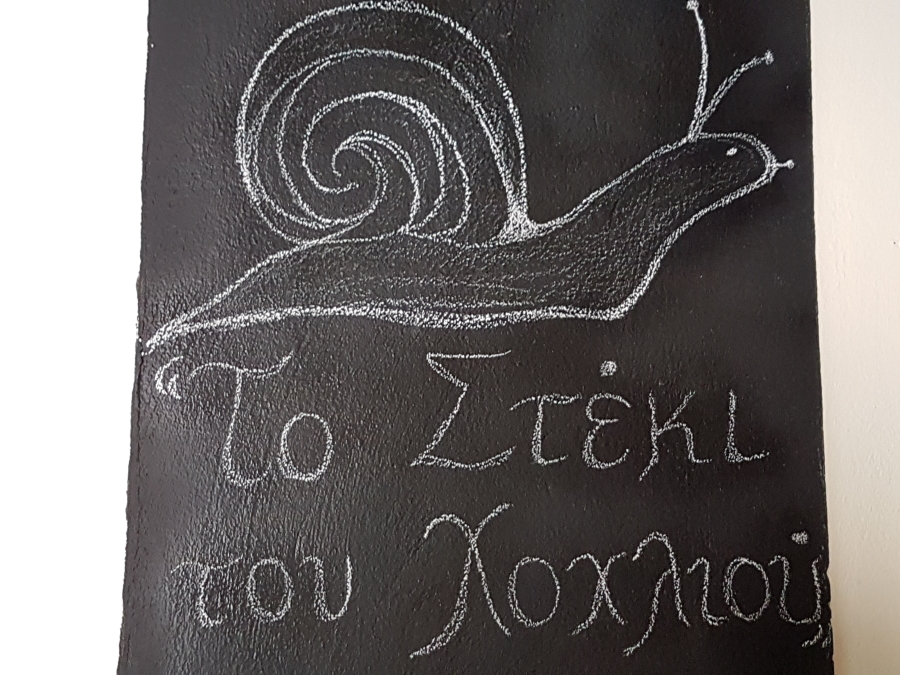 We were on a food-and-drink themed tour of Crete with our excellent guide Isi, from gocrete.net. Isi will organise tours on any theme that interests you, but if you choose a food and drink one you're in for a treat. Or rather, many treats. Isi arranged for us to tour vineyards and craft breweries, discover shops like the amazing herb shop in Kouses, meet someone who made petimezi and someone else who made rakomelo, and today he'd slipped in a lunch at this very specialist place. 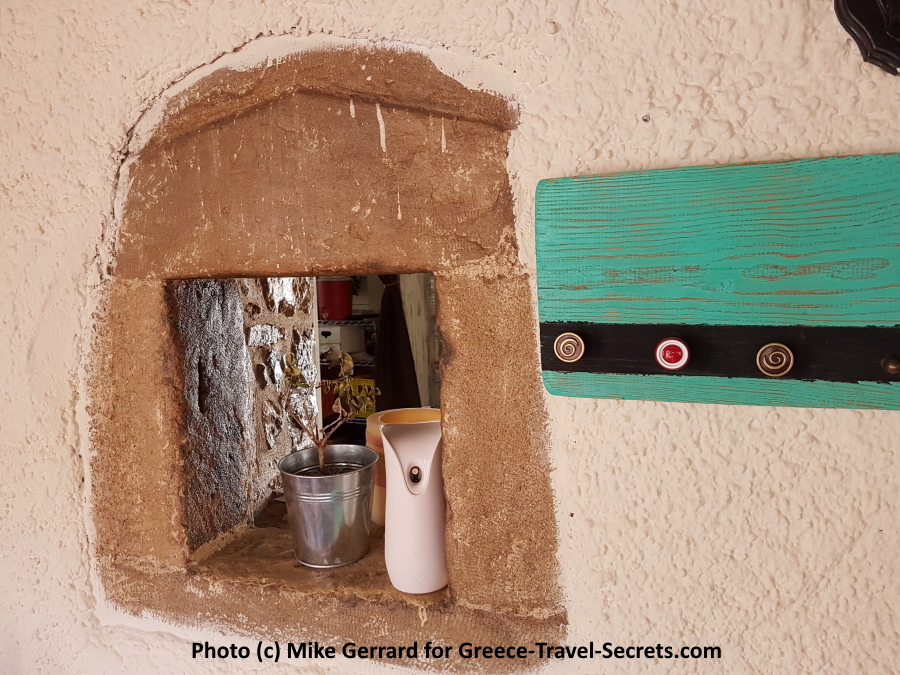 It's obviously not a place to come if you don't like snails, though you could still put a meal together from the side dishes they do, like fava beans and stuffed vine leaves. Today as our vegetable side dish we ordered stuffed cabbage leaves, and as they were prepared that morning like all the dishes, they were fresh and delicious. But what about the snails? 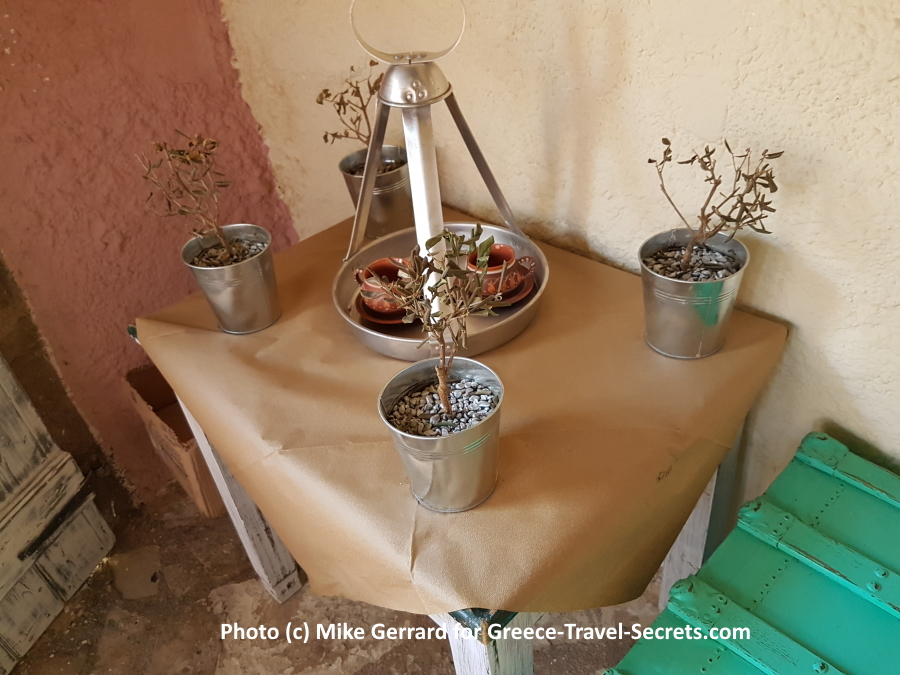 'Today they do four kinds,' Isi explained, ' one is done in the frying pan, then put in the fire with vinegar and rosemary. It's called bourbouristous, from the noise the snails make in the fire: bour-bour-bour…. Another dish is just boiled snails. It's a kafeneon not a taverna or restaurant so the menu is small. For drink there is local wine, retsina, raki, different coffees of course. It would only cost you about €6-7 depending what you have.' 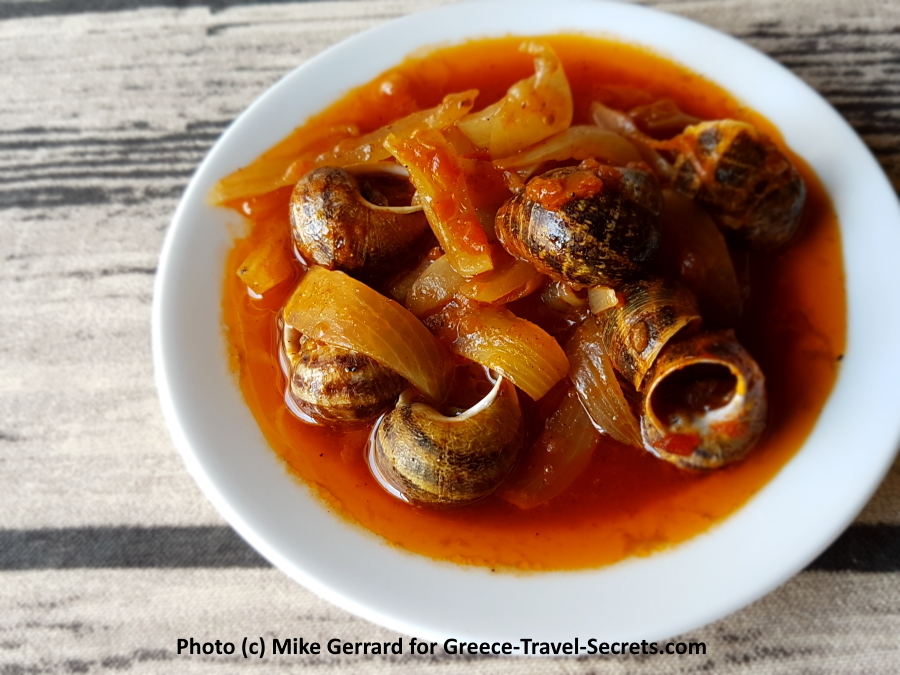 Today Isi recommends the two other snail dishes on the menu. The first is snail with onions, which doesn't sound very appetising but Isi explains there's more to it than onions, with tomatoes, herbs and spices added, making it more like a snail stifado. We've never had anything like that, so why not? 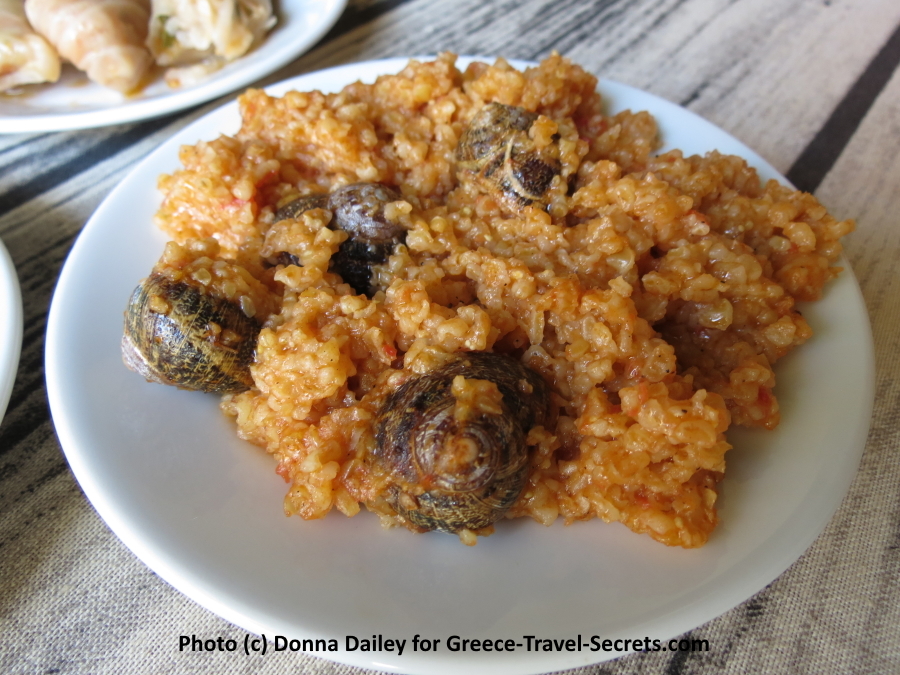 Snails with Wheat and Cheese

Nor have we even heard of anything like the other option, which Isi describes as snails with dried wheat and cheese. What? When it comes it looks something like a snail pilaf, and tastes somewhere between a pilaf and a savoury risotto. It's incredibly tasty, as is the snail stifado, which is juicy and full of flavour. 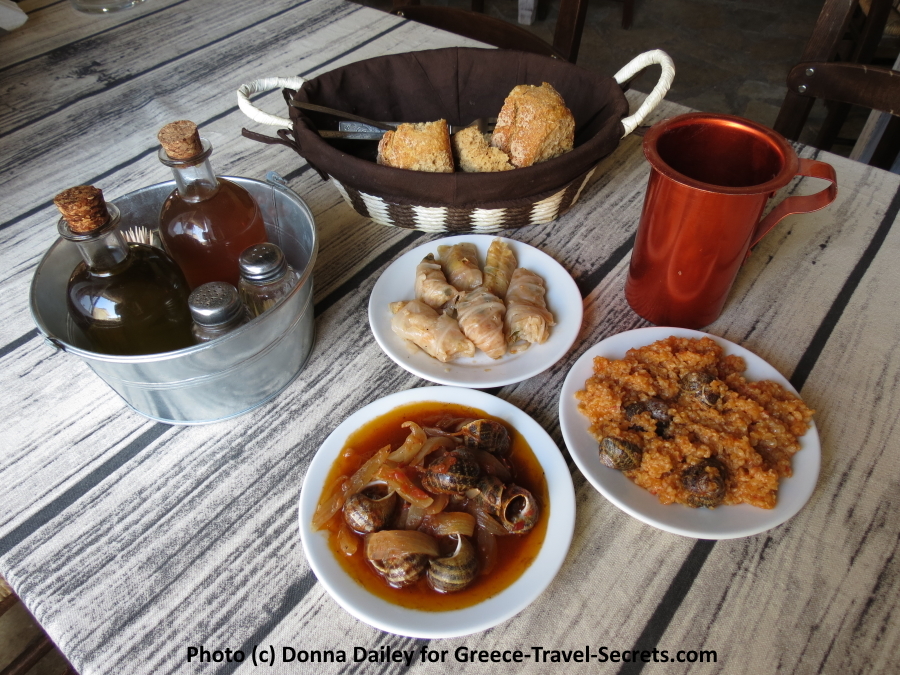 Meze at The Snails House on Crete

We highly recommend a visit to The Snails House in Plouti on Crete for a unique dining experience. And if you want a lesson in how to eat a snail, we got Isi to show us a few nights later:

We've put all these photos, and a few more, together in a video slideshow about The Snails House on our YouTube channel:

The Snails House is on the main road in the village of Plouti in southern Crete, about a 30-minute drive from Matala and Agia Galini, and 15 minutes from Phaistos. For opening times phone 02892 096352. 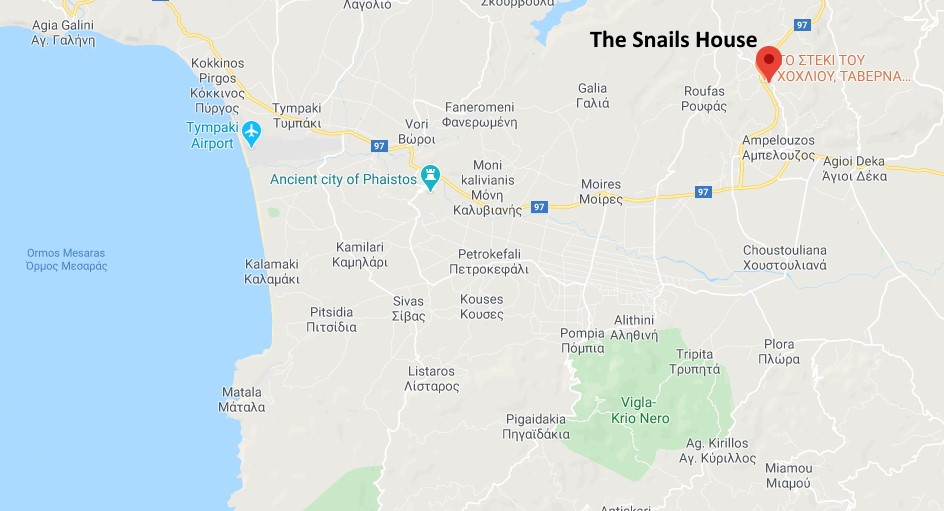