This drive along the west coast of Crete and inland from there will take a whole day and starts and ends in Kastélli Kissámou, west of Chania. 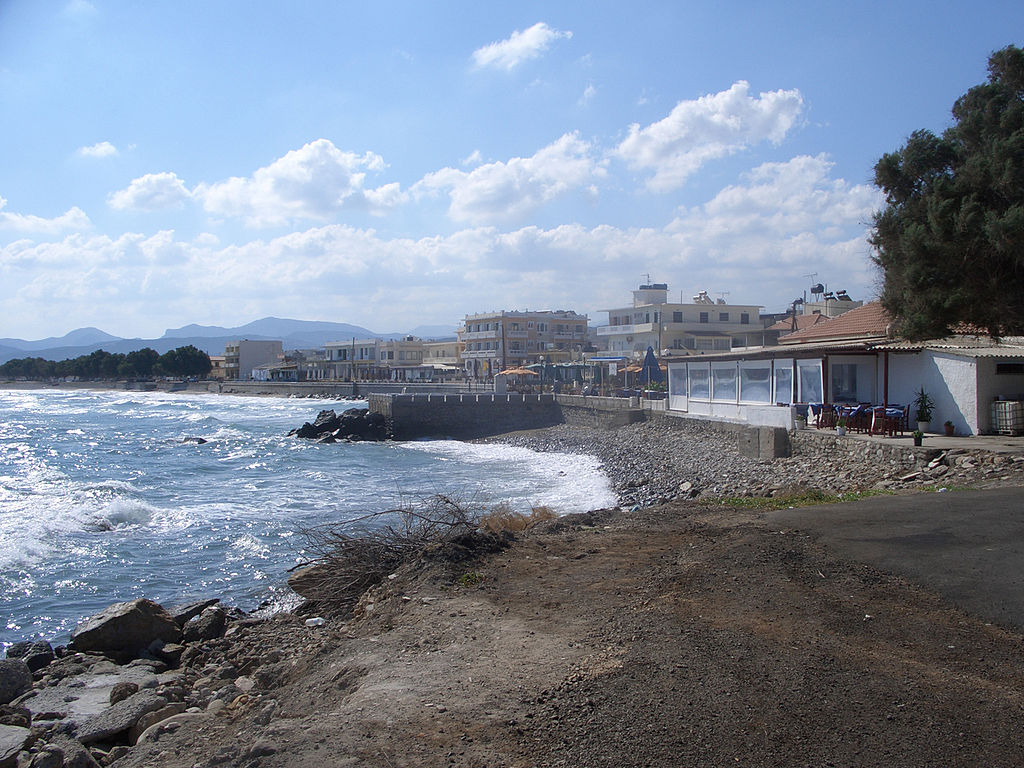 Some of Crete’s best sandy beaches lie on the island’s far western coast, and their remote location has so far brought only minimal development, leaving them largely unspoiled. The dramatic mountain and coastal scenery is well worth the long day’s drive. Drive with care on the narrow mountain roads.

The total length of the drive is about 110 km (68 miles), and driving time is 3-4 hours. Allow all day as you'll want to make lots of stops and have a break for lunch.

NOTE
These directions were accurate when we did the drive but of course roads and signs can change any time, so be prepared.

From Kastélli Kissámou (sometimes called Kissamos) on the north coast, take the Old Road east towards Chania for about 2 km (1.2 miles) to Kaloudianá. Turn south to Topólia, a pretty whitewashed village clinging to steep slopes. The church of Ayía Paraskeví, with its striking Italianate bell tower, has late Byzantine frescoes.

Of course you could also start the drive in Chania. Chanika to Kaloudiana is about a 30-minute drive west along the coast.

Just beyond town a tunnel marks the start of the Koutsamatádos ravine. Only 1.5 km (0.9 miles) long, it is highly dramatic, the narrow road clinging to the western slope with sheer cliffs rising 300 metres (984 feet) above a river bed.

Near the end of the gorge, steep steps on the right lead up to Agía Sofía Cave, one of the biggest on Crete. The huge cavern is filled with stalagmites and stalactites, and there is a small chapel. It was occupied in Neolithic times. Just beyond is Koutsamatádos village with a couple of tavernas.

About 3 km (1.9 miles) further on, you can detour along a 5 km (3.1 miles) twisting mountain track to Milia (signposted), a beautifully restored traditional farming village. Or continue straight ahead on the main road through the Tiflós valley, lush with olive groves and tall plane and chestnut trees.

At Élos, the road winds up the hillside to the centre of this pretty village, the largest of the nine kastanochória, or chestnut villages which harvest the crop for export. A chestnut festival is held here each year in late October.

As you climb higher out of Élos, there are spectacular views back over the valley and its terraced hillsides. Pass Perivólia, and at the T-junction turn left for Elafonísi. The road curves down a pretty, peaceful valley, passing through Váthi, another chestnut village, and Plokamianá.

A good asphalt road enables a fast descent to the sea, 10 km (6.2 miles) away with a scenic rocky shoreline. Perched high on a rock bluff above the barren landscape is the gleaming white Moní Chrysoskalítissa. The convent’s name means ‘Virgin of the Golden Step’, as one of the 90 steps up to it is said to be made of gold (but visible only to those who are without sin). The original church was built in a cave in the 13th century. This ones dates from the 19th century and contains an ancient icon of the Virgin. 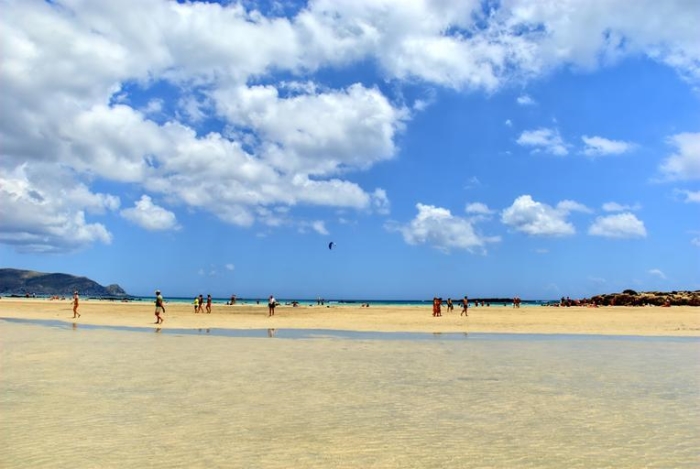 The Beautiful Beach at Elefonisi

It’s a further 6 km (3.7 miles) to the white sands of Elafonísi, at the southwestern tip of the island. The paved road ends after 4km, and a gravel track leads down to the beach. The turquoise waters are warm and shallow, seldom reaching above waist-high, and you can wade across the sandbar to Elafonísi Island. Despite its remoteness, this idyllic spot is always busy in high season; there are a few snack bars and plenty of sunbeds for hire.

Return on the same road, and after Váthi take the left fork through Kefáli. Its 14th-century church, Metamórphosis tou Sotirou (Transfiguration of the Saviour), contains some fine Byzantine frescoes as well as graffiti from early travellers. A path beside the kafeníon leads to the church.

Beyond tiny Papadiana, the road becomes a series of tight, narrow switchbacks climbing up the mountainside. There are stunning views back across the valley to the glistening sea. After Amigdakalokefáli, there are wide vistas of the western coast as the long, slow descent begins through old mountain villages such as Keramotí. You only realise how high you are when you glimpse the sea and the coastal fields far below.

Kámbos, 14 km (8.7 miles) from Kefáli, is a larger, pleasant village with pretty stone houses clinging to the slopes around a ravine. After winding through it you make a magnificent descent into the canyon lined with rock walls of red and gold covered in greenery, and on to Sfinári.

The road climbs again, affording a stupendous view over the bay and beach below. The big peak of Mount Manna looms ahead. After 9 km (5.6 miles) turn left for Plátanos, a large white-washed town perched on a high plateau.

Drive through town. Most signs are in Greek only, making the ill-marked turn for Falássarna more difficult to see (it’s better signposted from the other direction). As you leave town look for a petrol station on the left, and just beyond a blue BANK sign. Turn left onto the small road here. Shortly after the turn follow the brown and yellow sign for Ancient Falássarna. As you descend to the coastal plain, turn right at the signposted junction for Falássarna.

Falássarna has lovely stretches of golden sand set between rocky inlets that are great for beach-combing. Facilities are basic, with a handful of small hotels and tavernas scattered along the road. North of the beach a dirt track leads to the ruins of ancient Falássarna, a port city dating back to the 6th century BC.

Return to Plátanos and continue north to Kastélli, 11 km away.

If you want a print-friendly PDF of this drive to print out and take with you, click here.