On an island full of Minoan remains, the ruins of the ancient Greco-Roman city of Gortina gives a glimpse of a later era. The core site is small but impressive, with the enormous basilica of Ayios Títos and the law code – the first such code to be written down in Europe – inscribed on massive stone blocks. If time allows, you can wander through the surrounding fields and olive groves to discover the scattered remnants of this important city.

Also known as Gortyn or Gortys, the settlement dates back to Minoan times. Built along the River Letheos (or Mitropolitanos) on the fertile Messara plain, it prospered and grew under the Dorian Greeks and by the 8th century BC had become the most important city in southern Crete. When the Romans conquered the island in 67 BC, they made Gortina the capital of their province Cyrenaica, which encompassed not only Crete but much of North Africa.

A century later, St Titus made his base here and set about converting the population — which numbered some 30,000, the largest in Crete — to Christianity. It became the religious as well as the political centre of the island.

Gortina flourished throughout Byzantine times until Saracen raiders sacked the city in 824. It never recovered and was soon abandoned. Today its ruins cover a large area, much of which has not yet been excavated. 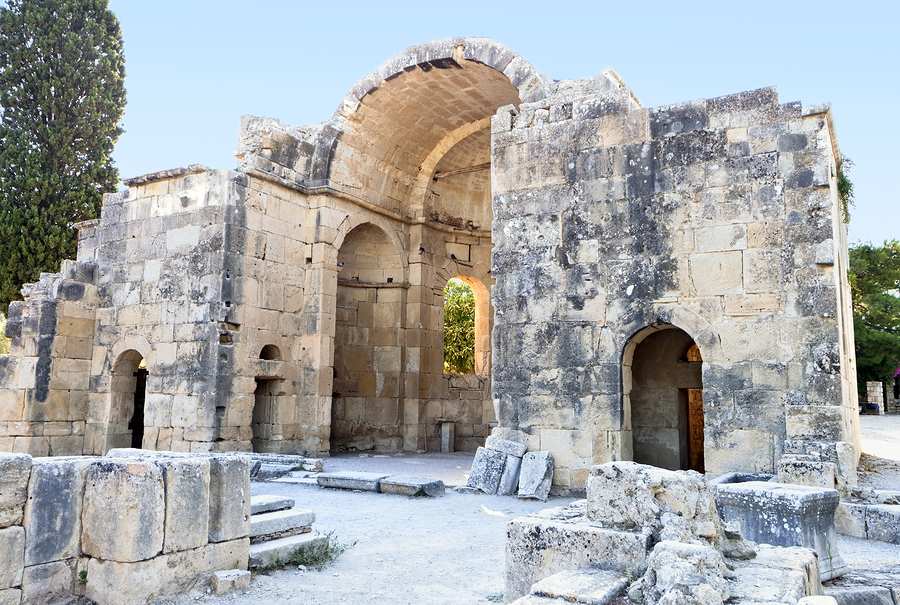 The major ruins of Gortina lie within a fenced site on the north side of the road. As you enter, the massive shell of Ayios Títos draws you to the left. Built in the 6th century, it is the best-preserved early Christian church in Crete. It was the seat of the archbishops until the Arab invasion. The vaulted central apse gives you an idea of its former magnificence, and there is a small shrine in one of the side aisles. The holy relics of St Titus were kept here until 962 when they were moved to a new church in Iraklion. A service is held here once a year on 23 December, the saint’s feast day.

St Titus the Apostle
According to tradition, Titus was a descendant of a noble Cretan family. He was well-educated and journeyed to Jerusalem, where he became a devoted disciple of St Paul the Apostle and travelled with him on his apostolic missions in Asia and Europe. Paul brought Christianity to the island around AD 59, and left Titus to establish the Cretan church. He became Crete’s first bishop, and died at the age of 94 in about AD 105.

Beyond the church is an area thought to be the ancient agora, or forum. Here, overlooking the remains of the Roman Odeon (a small theatre used for musical performances and poetry recitals) is a modern building sheltering Gortina’s greatest find: the law code. Carved by the Dorian Greeks around 500 BC onto massive stone blocks, it represents the earliest known written laws in Europe.

The tablets are arranged in 12 columns standing 3 metres high. The 600 lines of archaic inscription are read alternately left to right and right to left — a style known as boustrophedon, a word which describes the pattern made by an ox plough. They provide invaluable insight into this period of Greek history, particularly its social organisation. The code is actually a series of rulings clarifying laws that pertain to marriage, divorce, adoption, property and rights of inheritance. It also laid down penalties for adultery, rape, assault and other offences. Gortina’s population was divided into a distinct hierarchy of rulers, citizens or freemen, serfs and slaves, and the rights and penalties varied greatly among the classes. 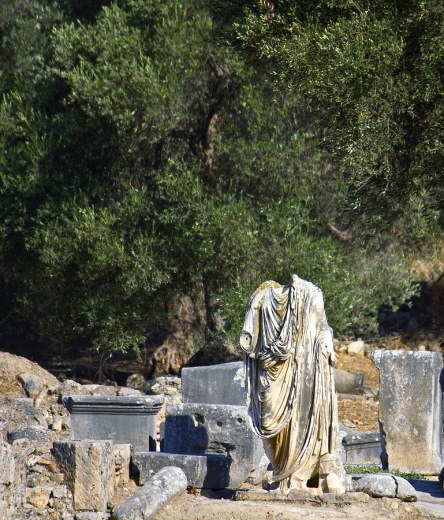 The Acropolis and the Roman City

On the opposite bank of the river you can see the remains of a larger theatre. Above, on the hilltop, is the ancient Acropolis and the ruins of a Greek temple, a Roman hall (the kastro) and ramparts.

Dotted throughout the open fields on the south side of the main road, stretching back to Ayii Dheka, are various remains of the Roman city. Many are little more than scant walls and piles of stone, but it’s good fun to seek them out in this atmospheric setting among giant gnarled olive trees.

Several of the main sites lie along a track, including the Temple of Isis and Serapis, dedicated to the Egyptian gods. To the south, the Temple of Apollo Pythios with its stepped monumental altar was the main place of worship in pre-Roman times. To the east is the Praetorium, the Roman governor’s palace. Through the fence you can see its paved courtyards, carved columns and capitals and brickwork walls, and the Nymphaeum, or bath suite.