Greece Travel Secrets visits the Cretan Botano herbs and spices shop near Matala in southern Crete in search of the herb man of Kouses. 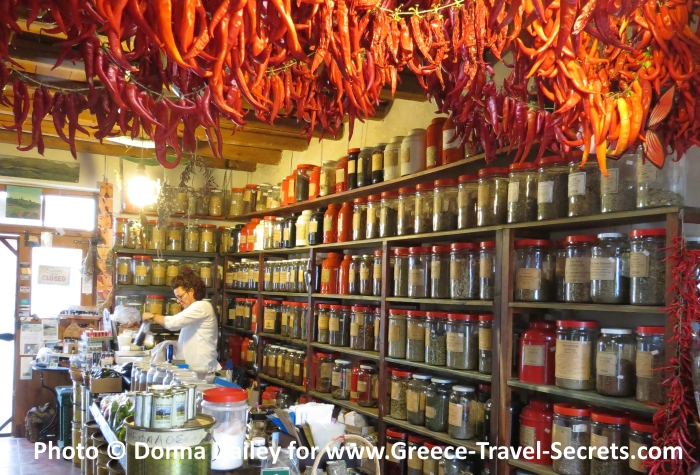 Iannis Yanoutsos was from Thessaloniki and was visiting Crete when he heard that he had lost his job. He was an engineer whose speciality was repairing old printing machines, but with changes in technology there were fewer demands for his skills, and his company gave him early retirement. It was an opportunity to find a new skill, and so he became the herb man of Kouses. 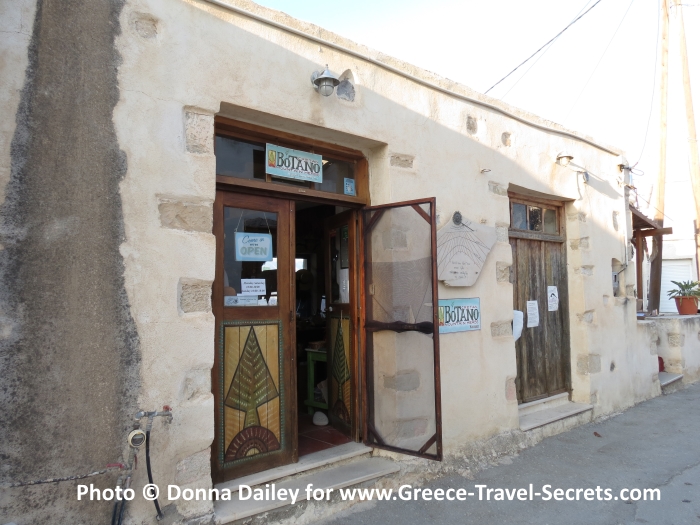 Iannis is away when we call at his shop, Cretan Botano, also known as the House of the Swallows, in the tiny village of Kouses. It gets its name because there are two swallows’ nests inside the shop, with the doors and windows adapted so the birds can fly in and out.

Iannis’s wife Hrysa is busy behind the counter with a steady stream of customers, but still takes time out to tell us their story. She also explains why they have so many chilis all over the shop. ‘Iannis likes his food hot,’ she says. ‘Our chilis are all from around the village here, although chilis grow all over Crete.’ 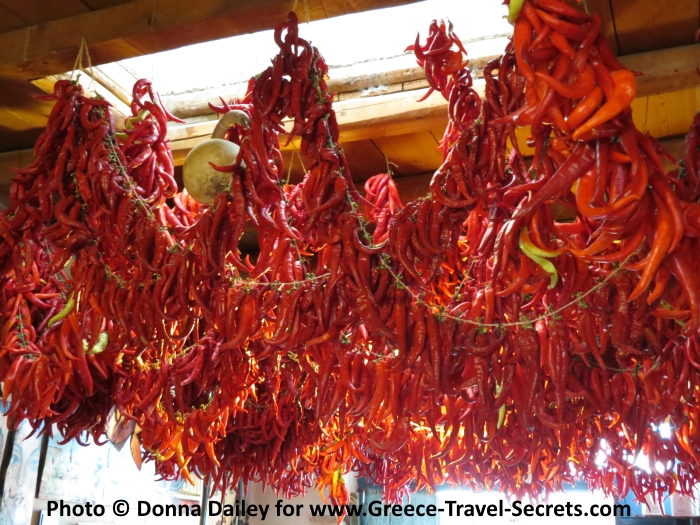 After Iannis was made redundant, he and Hrysa opened their shop about ten years ago in the centre of this village, about 6 miles (10 kms) north-east of Matala.

‘Back then this was an old kafenion,’ Hrysa says, and with typical Cretan hospitality she offers us tea, wine or raki, and suggests we sit out on the balcony behind the shop. 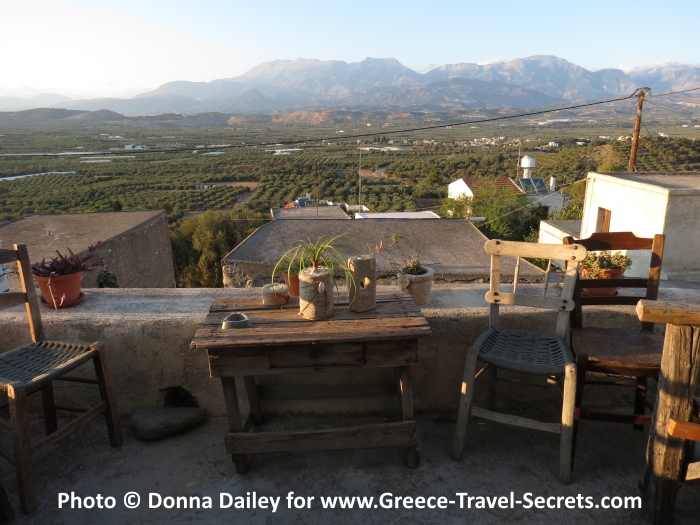 ‘It had been like that for 100 years. Iannis renovated the place and started drying and selling herbs. His shop helped to regenerate the village because of the visitors who came. The village coffee-shop re-opened, for example. Only about 100 people live here, and there are no rooms to rent in the village, but still people come because of the shop.’ 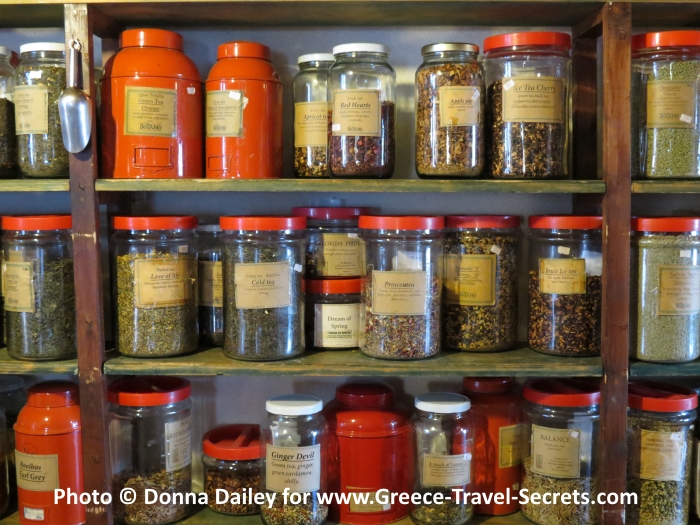 Hrysa tells us how their shop slowly became successful.

‘About seven years ago one journalist who had a TV programme in Germany, Belgium, Luxembourg and France came and made a film about us. Since then the visitors have increased every year because it was a very good film. Iannis also grows olives and in the programme I cooked Greek dishes. He was making programmes about food and local cuisine. 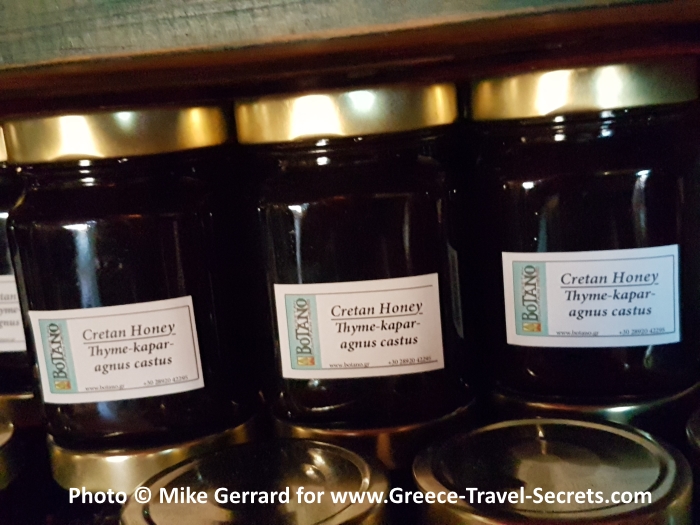 ‘That film was very good for the whole village. It was a half-hour film, all about us. This was the beginning. The next year a German TV programme came, then magazine journalists started to come and to write about us. We feel lucky and grateful. We believe we make things with love and people appreciate it and it's a success eventually.’ 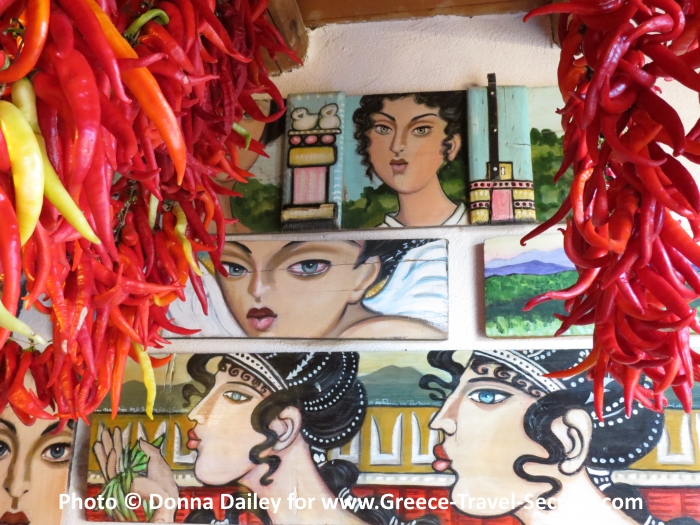 The shop is certainly a remarkable place. Although it started off by selling the Cretan herbs that Iannis grew, collected and bought from people to sell, it’s now crammed with herbs and spices from all over the world. A jar of harissa spice from Tunisia sits on top of a jar of Baharat spice from the Middle East. Next to that is a Berber spice, and nearby a jar of piri-piri. 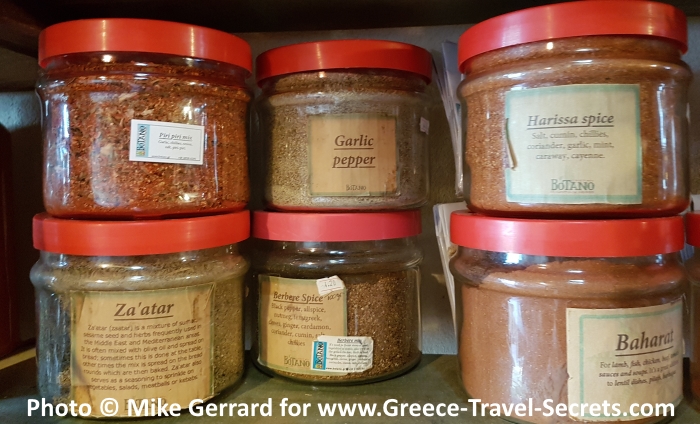 There’s coriander next to cardamom, and close by a jar of cinnamon from Sri Lanka. It has all the smells of an exotic souk here in this tiny little Cretan village.

A large red metal can contains ‘Indigestion tea’ or ‘Dyspepsia’. There’s a herb to help anyone suffering from rheumatoid arthritis, another for high blood pressure and another for stress relief. Mastic from Chios stands alongside vanilla pods from Madagascar.

‘Iannis found very nice people here to provide him with wild herbs from all over the island,’ says Hrysa. ‘They were nice quality herbs, like oregano. He also has a garden of almost one hectare [2.47 acres] where he grows things for the last two years. Another important experiment he was doing was planting herbs under his olive trees which helps the olive oil to get flavour and also the benefits of the herbs.’

On the shelves are jars of cranberries and bilberries, of dried wild sweet cherries. There are sesame seeds, mustard seeds, bottles of olive oil infused with basil and jars of Cretan honey and Cretan salt.

Hrysa tells us that Iannis started by growing simple herbs like mint and basil, for himself and to sell in his shop. She says it’s very hard to find Cretan mint and basil on sale anywhere because everyone grows their own. The herbs you find in the markets sell mainly to visitors and are all imported from overseas.

‘What he also did later,’ Hrysa says, ‘was to start growing tulsi, which is popular in India. It's like basil and he made this experiment to see if it would grow here and it was very successful. He keeps experimenting, all the time. People send him seeds from Africa. Another herb that grows well here is artemisia or absinthium. It's an anti-oxidant so you have it in tea. It's very bitter. He was the first to grow this on Crete.

‘We've heard French, German and English people in here, also Greek. Because it's a nice product the people come again and again every year when they return to Crete.’

We weren’t surprised. We left laden with two bags full of assorted herbs and spices, and a vow to return and hopefully next time meet Iannis himself. He sounds a remarkable man.

Greece Travel Secrets discovered this wonderful place on a food and wine tour of Crete with Go Crete.