The Byzantine Church of Panagía Kerá in Kritsa and not far from Agios Nikolaos is one of the most famous in Crete, and close by is the site of Ancient Lato. 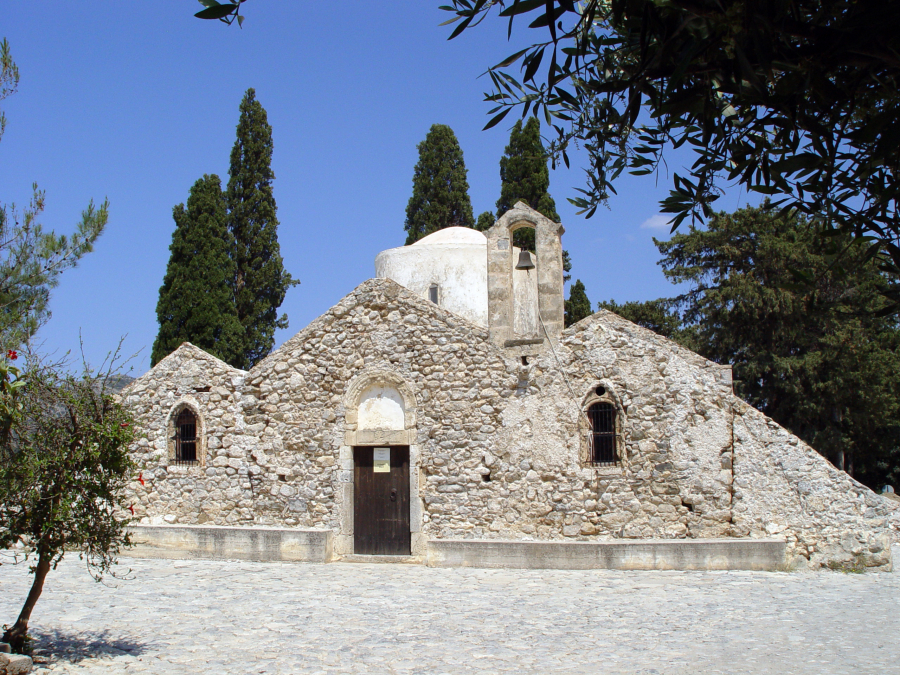 This file is licensed under the Creative Commons Attribution-Share Alike 3.0 Unported license.

The tiny Byzantine Church of Panagía Kerá is one of the most famous in Crete, renowned for its 14th- and 15th-century frescoes which cover almost every inch of its interior walls with vivid religious scenes.

It stands just outside the traditional village of Kritsá, as does the archaeological site of Lató, and a visit combining all three makes for a fascinating and contrasting few hours.

Don’t even think about trying to park in Kritsá. Follow the signs to the official car parks that are provided.

Kritsá itself is said to be the largest village on Crete, and it sits in the low hills only about 10 km (6.2 miles) inland from the busy resort of Ágios Nikólaos. It can be very crowded when coach parties descend and hundreds of people wander the steep streets searching for the best of the local handicrafts.

Weavings, embroidery, lace and leatherwear are all here in abundance, and with better prices than you will pay in shops in the resort towns on the coast. When the visitors depart it reverts to being more of an ordinary Cretan village, and an attractive one too with its backdrop of mountains and views in places down to the coast.

The church of the Panagía Kerá is on the right as you approach Kritsá from Áyios Nikólaos and is signposted before you get to the village itself.

The undoubted highlight of the region, though, is the delightful church of the Panagía Kerá. A path from the main road leads to the little domed white church, which has just three tiny aisles. The view when you enter is quite stunning. With the exception of the stone floors, every inch of the church is covered in frescoes.

In the central aisle of the Panagía Kerá, on the right-hand side near the door, is a delightful and moving portrait of the Virgin and Child, who are exchanging the most loving of looks.

Some of the colours now are a little dulled with time, but the images when you examine them are as vivid and as beautiful as when they were first painted, in the 14th and 15th centuries. The sheer volume of images is overwhelming, including icons of the saints, Biblical images such as the Last Supper, and graphic depictions of the punishments that sinners can expect in Hell.

It’s worth allowing time to explore Kritsa. Also here is a small but interesting museum, the Museum of Rare and Endemic Plants, and the Kritsotopoulas Museum, a history museum.

Early morning and late afternoon are the quietest times to visit Kritsá. Check the opening times of Lató and the Panagía Kerá, and plan the visit accordingly.

Signposted from the village and 3 km (1.9 miles) north is the site of ancient Lató, well worth visiting both for the drive along the zig-zagging valley road up to the site, and the magnificent views along the valley when you get there. Lató is one of the lesser-known sites, with comparably fewer visitors, and is all the better for that.

Lató dates from the Doric period, which came after the Minoans and the Myceneans, when the Dorian people, originally from Northern Greece, ruled Crete and much of the Greek mainland. This began in about 1100 BC and lasted till the arrival of the Romans in 69 BC. Lató was an important city, as can be seen by the extent of the remains which spread along the hillside.

Excavations only began in 1957 and much work still needs to be done. Areas uncovered so far include the agora, or marketplace, steps that formed part of a theatre, the foundations of shops and artisans’ workshops, and what was probably the original entrance gate to the old city. The best part of the experience is simply being there, however, as the site exudes its own unique charm.

If you drive from Kritsa to Lato you can carry on driving past Lato for a circular route back to Ayios Nikolaos. It's a little longer but a nice drive.