This Rouvas Gorge walk starts and ends in Zaros in southern Crete and should take three to four hours with a distance of eight kilometres or five miles. 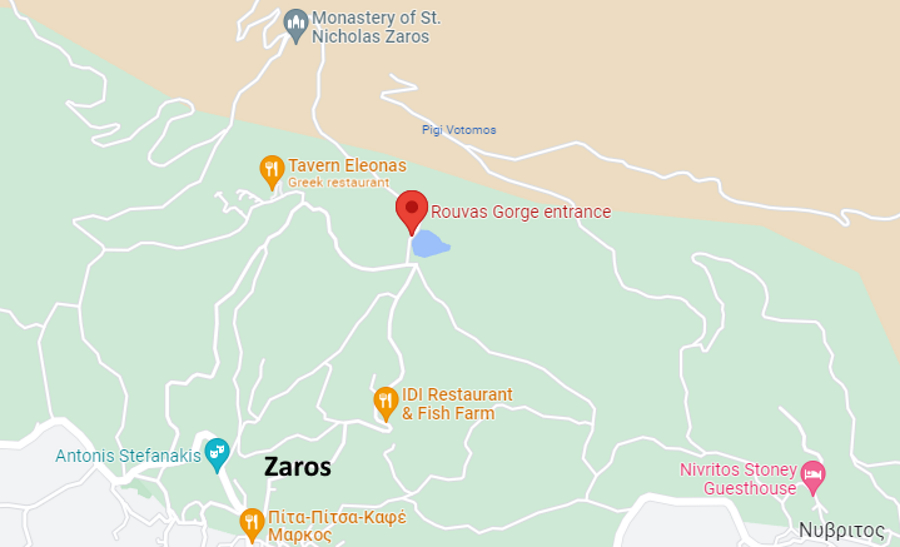 This exhilarating walk takes you to a mountain monastery and up a rocky gorge, rich in flora and fauna and with beautiful views of central Crete’s Psilorítis range. If you want to make a full day of it, you can extend the walk to another mountain church. Start early to avoid the worst of the midday heat.

NOTE: These directions were correct at the time of writing but sometimes routes can change so check before setting off.

The delightful village of Záros nestles at the southern foot of Mount Ída (Psilorítis). It is famous throughout Crete for its spring water, bottled by a local company on the edge of town. Drive west through town and park on the main road near the post office. (To shorten the walk, you could also drive to the lake).

Continue walking along the main road. Just past a modern fountain, you’ll see signs for the Idi Hotel and Lake Votomos. Turn right and follow the narrow road up the hill, past vegetable gardens and an old olive press to the Idi Hotel (see page 000), about 1 km from town.

The road makes a sharp bend to the left. Continue uphill past the trout farm - its fish is a Záros speciality. The road is lined with morning glories, pomegranate and lime trees while the mountains rise up ahead. After 15 minutes you reach the small Lake Votomos, formed by the Záros springs. There’s a good taverna on the south side.

Both the right- and left-hand paths lead round the shore of the lake and up stone steps. Go through the gate (and close it). Proceed along the dirt path that ascends gently above the olive groves, with views over the valley to the left and the mountain on your right.

As you round a bend you can see the monastery of Áyios Nikólaos ahead on your left. Although the complex appears modern, its church has frescoes dating from the 14th century. It is home to a small community of monks.

Opposite a little wooden bridge beside the monastery, a set of rock steps on your right leads up to the tiny chapel of Áyios Efthimios, filled with icons.

Into the Rouvas Gorge

Cross the bridge. The path turns sharply to the right and zig-zags up and away from the monastery. Follow the yellow arrows and markings painted on the rocks to guide you through the boulders. You are now entering the Roúvas Gorge, which the locals also call Áyios Nikólaos gorge, after the monastery.

After a short, steep climb you come to a fence. Go right following the arrow as the path curves around the next hill. Take the stone steps up and through a gate. The 1.6 km (1 mile) path through the gorge alternates easy stretches along the herb-covered hillsides with steeper climbs up stone steps. The route is well marked with yellow arrows.

The path follows along the steep side of the gorge, then drops down through the ravine and doubles back on the far side. Here it becomes a wide track leading uphill to a signpost. To extend the walk, follow the trail up through the peaks for 2.7 km (1.7 miles) to the mountain church of Áyios Ioannis.

To return, follow the sign for Votomos and Áyios Nikólaos. This dirt track is narrow and steep at first, so go slow. There are beautiful views down the gorge to Záros. When you reach some bee hives, walk quickly past and turn left onto a wide dirt road that leads downhill to the monastery. Follow the sign for Votomos that leads round behind it to the wooden bridge, and return to Záros the way you came.

Download a PDF of this walk to print out and take with you here:

See our other Zaros pages about Keramos Studios and Dining at Vegera.