The Minoan Palace at Phaistos is felt by many to be a far more enjoyable site to visit than the better-known Knossos. It stands on a hill overlooking the fertile Messara Plain, and the fact that it has not been reconstructed like Knossos allows visitors to reconstruct the Palace in the best possible way: in the imagination. To see the large Central Court, the royal apartments, the Grand Staircase and the nondescript spot where the fabulous Phaistos Disc was found all make for a memorable experience.

The Approach to Phaistos

The approach to Phaistos is part of its charm, especially if you have already seen Knossos. There are no parking attendants here trying to lure you into their parking lots, just a small car park at the end of a zig-zag climb up a little hill. You then walk along the approach to the site to buy a ticket, little knowing what lies ahead.  You enter the site beyond the very good bookshop, souvenir store and café, and are greeted with a good overall view of the layout. 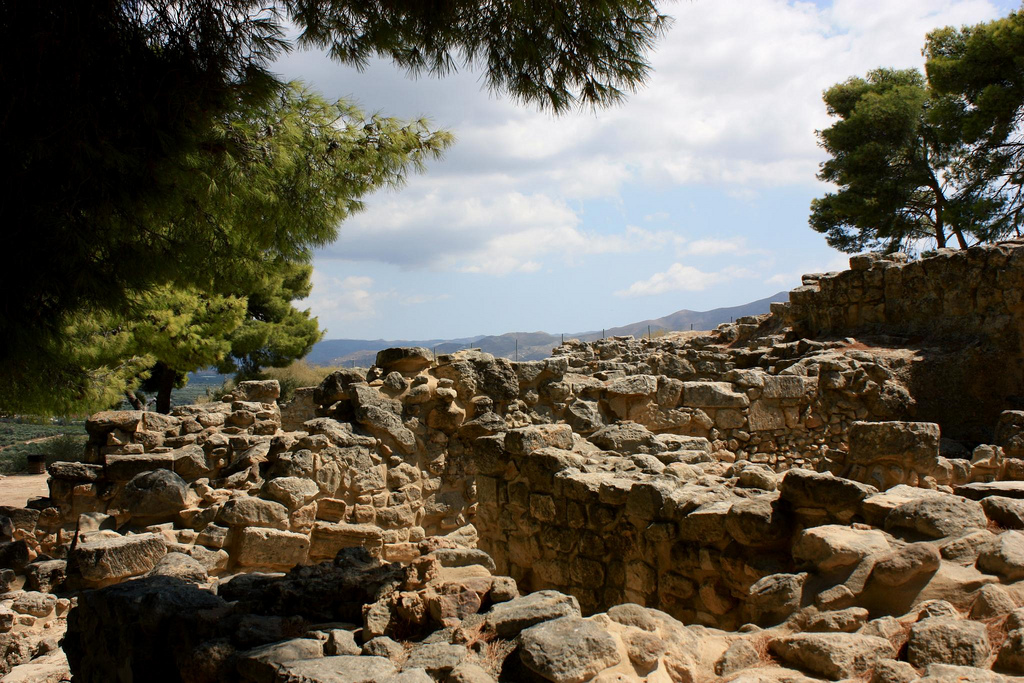 The History of Phaistos

It is thought that good views were also part of the original attraction of Phaistos for its inhabitants, with the Palace constructed in a way that makes the most of them. Prior to that there were other people enjoying the setting, as deposits have been found going back to Neolithic and Early Minoan periods (3000-2000BC). The views have probably changed very little since then, though the buildings have.

The first palace on the site dated from about 1900BC and is known as the Old Palace, with some of its remains still here. It was destroyed and repaired twice before its ultimate destruction in an earthquake in 1700BC, to be replaced by the New Palace, which remained in use until 1450BC and the end of the Minoan civilisation. The Old Palace remains are mostly on the western edge of the site, overshadowed by the much finer remnants of the New Palace. 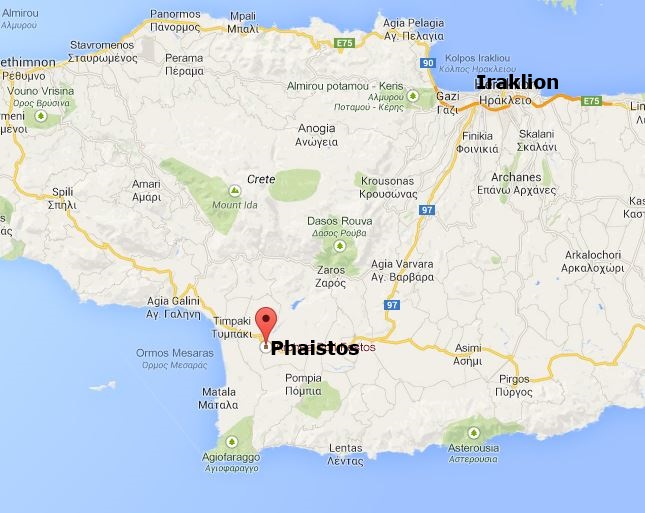 The first open space you come to, the West Court, is a good place to try to picture the palace as it would have been. Go down into the Court and look towards the easily-recognisable Grand Staircase. To the right of this are the remains of the western façade of the palace, which was built to bask in the glow of the setting sun. To the north of the court is the theatre area, and to the south some large storage pits, used principally for grain.

If you climb the Grand Staircase – and unlike at Knossos, you can -- then to the right are the store rooms that were actually within the palace, holding more grain and also oil, in the vast storage jars or pithoi that can be seen in almost every museum on Crete. It is not known for sure if the commodities stored at the palace were given to the royal family by way of a tithe, or if the building acted as a secure storage area for everyone in the area to use.

The Phaistos Disc
Only about 6 inches in diameter, the Phaistos Disc is one of the most important and intriguing items ever found on Crete. It dates from 1700-1600BC and was uncovered in 1903. Baked in clay, the disc has spirals of pictograms on either side, including flowers, people and animals. No-one has ever cracked the code, but the most favoured belief is that it was a religious object of some kind, with the symbols perhaps being the words to a prayer or hymn. 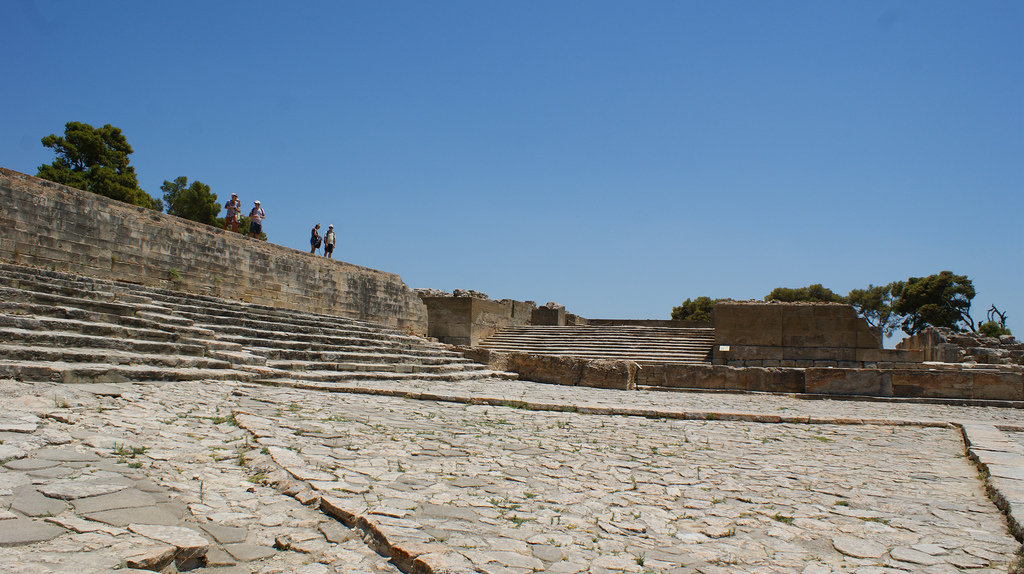 To the east of this storage area you will enter the impressive Central Court, a vast open area whose paving dates from 1900-1700BC. If you walk to the southern end of this then there are good views over the plain, still a fertile source of grain and oil today. It is the largest and most fertile of all the plains in Crete, producing huge crops of olives, of citrus and other fruit, and many types of vegetable.

To the north of the Central Court the area becomes a little confusing, as the remains are on two levels, but beyond the small South Court which you may be able to identify are
the royal apartments. There are many chambers and ante-chambers here, one set of rooms belonging to the king and another to the queen.

If you continue walking past these almost to the edge of the site, you can turn right and see on your right the walls and foundations of a row of small buildings. These were the palace archives, where the Phaistos Disc was found, a small object that preserves its secrets, just as the palace of Phaistos preserves its own air of mystery and beauty.


Some other Crete pages