Hiking One of the Longest Gorges in Europe

One of the greatest experiences on Crete is to walk the Samaria Gorge, which is one of the longest gorges in Europe. In fact it is the second-best thing to do on Crete, if visitor numbers are a guide, as almost half a million people walk its length every year, a number exceeded only by visitors to Knossos.

Read our personal account of Hiking the Samaria Gorge

You don't need to be a mathematician of the caliber of Pythagoras to work out that at the height of the summer this means that there are a few thousand people walking down the Gorge every day. If you can possibly make your visit in the late spring or early autumn, there is more chance that you will be able to appreciate the grandeur and solitude a little more, but even if you have to make the walk in the company of many other visitors, it is still a walk worth making.

The Samaria Gorge on Crete

The length of the walk is about 18km (11.25 miles) in total, and most people take about 5-7 hours to do it. It is a demanding walk over sometimes rough terrain, but as it is downhill most of the way it is perfectly achievable by the reasonably-fit plodding walker, provided you take it easy. You should also wear suitable tough walking shoes and take a plentiful supply of both food and water, but you can replenish your water supply at the fountains along the route. 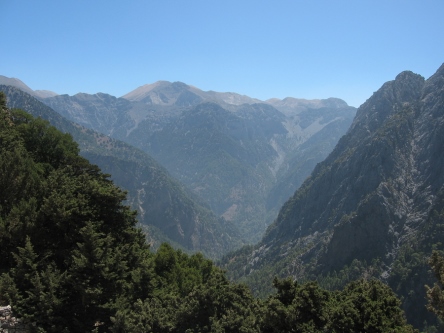 The walk begins south of the village of Omalos, where there is accommodation available if you book ahead and want to beat the crowds by making an early start: the gorge, which was declared a National Park in 1962, opens at 6am. The walk begins along the road south out of Omalos, where there is a large car park. From here you head straight down the marked xyloskalon, which means a wooden stairway. It is in fact a steep zigzag path cut out of the rock but with wooden rails for support and protection. It is one of the most spectacular parts of the walk, dropping down by almost 1000m (3281ft) in just 2km (1.25 miles), and at the bottom is the tiny chapel of Agios Nikolaos. There are also benches if you wish to have a rest from the challenging descent.

The path from here widens and levels out for a time, and crosses back and forth over the stream that runs down the gorge. In winter and early spring when the snows melt this can turn into a torrent, which is why the gorge is only open from May onwards. During the summer months it turns into a pleasant and cooling trickle of water. A few kilometers further on, to the left of the track, you pass the abandoned village of Samaria, whose inhabitants were resettled on the creation of the National Park.

Entering the most dramatic section of the Samaria Gorge walk, the walls of the gorge narrow till you reach the Iron Gates, a mere 3m (9.8ft) wide but with the walls towering 300m (984ft) above you. Then the walls widen out again and you enter a broader valley and another abandoned village, Agia Roumeli, where the safety procedures require you to hand in your ticket to show that you have left the gorge. Twenty minutes further on is the modern village of Agia Roumeli, and the cooling waters into which you may well be ready to plunge your tired feet. There are rooms here, and boats to take you to other coastal villages from where there are transport connections by road.


Some other Crete pages...