Things to Do on Santorini

Some of the best things to do on Santorini, as well as seeing the caldera, include wine tasting, beaches, and visiting the sites of ancient Thira and Akrotiri. 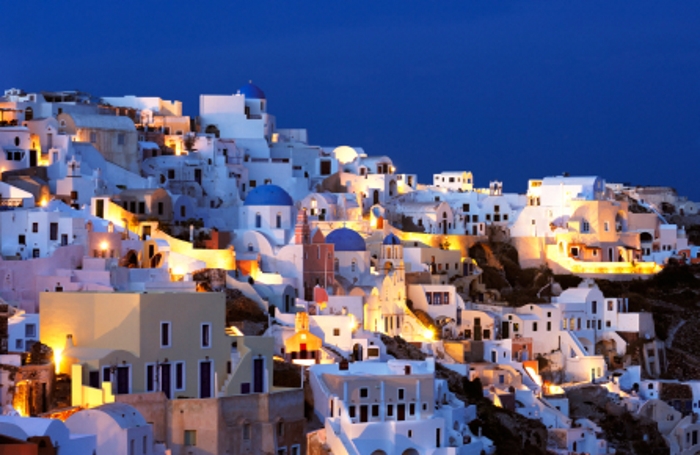 Santorini in the Cyclades is one of the most popular islands in Greece, which is not surprising. Although only small it has a dramatic beauty all its own. You can read more about Santorini including how to get there on our main Santorini page.

Things to Do on Santorini

So apart from admiring its beauty, what are the best things to do on Santorini? Here are some of the top options.

You can't miss seeing the caldera, especially if you arrive by ferry. Then you sail right into it. If you look at a map of the island you'll see that it resembles a pair of jaws. If the jaws were extended to meet at the little island of Thirasia, you'd have a circular island with a lake in the middle of it (with two little islands in the middle of the lake). 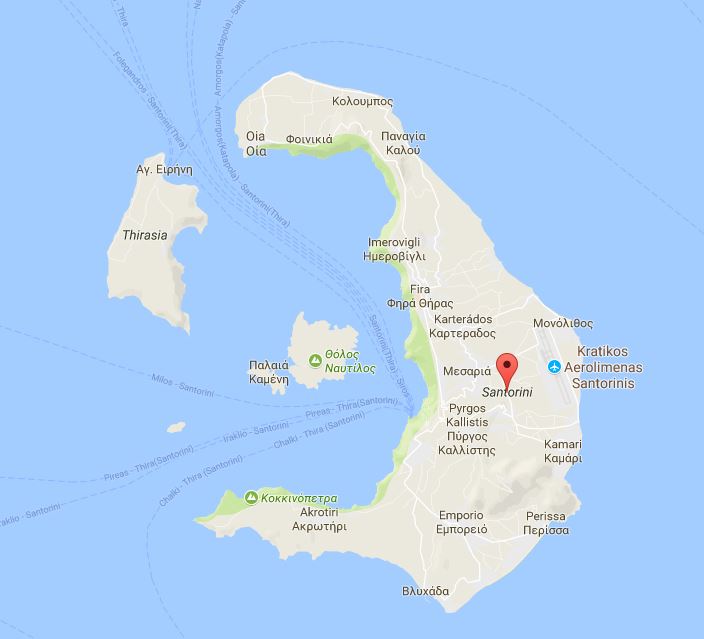 That circle shows you the rim of the volcano whose eruption created the island as it is today, from the much bigger island which was there in antiquity. The lake would be the volcano's crater. When it erupted, the sea rushed into the crater, covered some of the land, and left only the highest parts standing – Santorini.

It happened in about 1600BC and remains one of the largest volcanic explosions ever experienced on the planet. It caused a tidal wave, or tsunami, which is thought to have swept over Crete and destroyed the Minoan civilisation that existed there.

The best places to get good views and photos of the caldera include the town of Oia, on the northwest tip of Santorini, or by taking the road out to Akrotiri in the southwest.

Watching the sunset from the castle remains in the town of Oia (sometimes written as Ia) has become a Santorini tradition. It does mean that in summer it gets impossibly crowded, and you may or may not get a good view. Of course the sunset looks the same from wherever you watch it, but the castle remains do provide a good vantage point. The people in Thira will tell you you'll get just as good a view from there. Whether you go for the sunset or not, Oia itself is one of Santorini's must-see places, a very pretty place with a clifftop walkway and a Naval Museum to visit.

In the town of Thira there are a couple of excellent museums. The Museum of Prehistoric Thira is an excellent museum, whose collection includes frescoes and other finds from Akrotiri, while the Archaeological Museum also has displays from Ancient Thira. There are several other museums around the island, including in the south the unusual Tomato Industrial Museum, which tells the story of Santorini's tomato paste industry, housed in a former tomato canning plant.

The Town of Thira on Santorini

Because of its volcanic nature, Santorini's beaches come in a variety of colours. If you're a beach lover then you could plan a holiday around seeing as many of them as you can. The colour of the sand depends on which particular geological level of the volcano it came from, and you'll find beaches named for their colour: The Red Beach, The Black Beach or The White Beach (yes, there are some of those too).

One of the best beaches, for sunbathing and for photos, is the black sand beach at Kamari. Bear in mind that black sand gets hotter than white sand as it absorbs the heat rather than reflecting it. You'll find out how hot if you try to walk on it in your bare feet. This is also one of the busiest beaches on Santorini, so be prepared for the crowds.

Another popular beach is at Perissa, in the southeast of the island. With its neighbouring beach of Perivolos, here you have about 7 kms (4.5 miles) of sand. The beaches tend to get quieter the further south you go.

See which beach on Santorini made our list of Six of the Best Beaches in Greece. 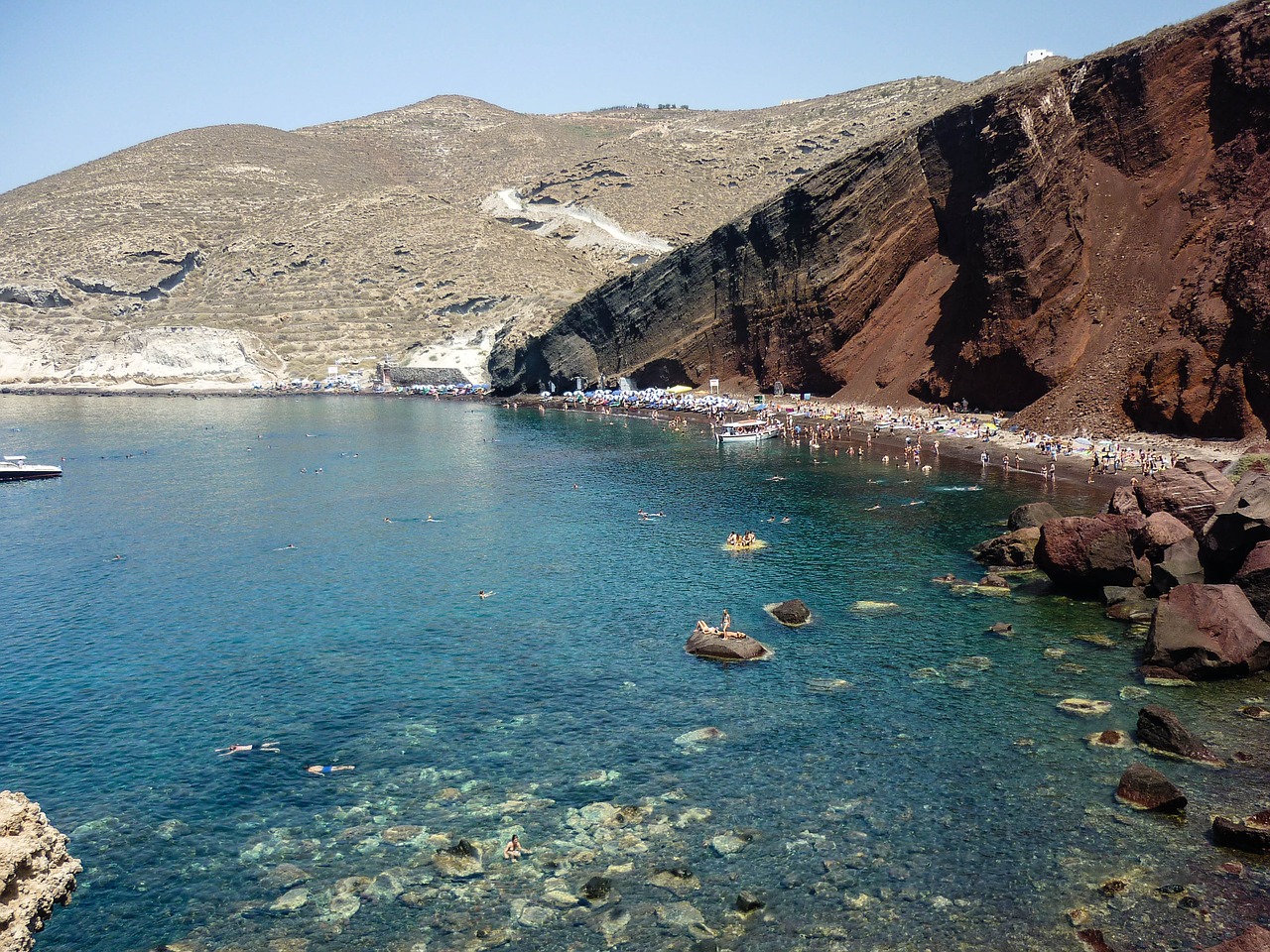 The Red Beach is on the coast southwest from Akrotiri, and is backed by dramatic red and black volcanic rocks. You can walk to it if you're visiting Akrotiri, or take the bus if you're staying in Thira. It's also a popular spot for day trips by boat so don't expect to have the beach to yourself.

If you want a quieter beach try Monolithos on the east coast, which is a good place for families as the sand only shelves gradually. You'll need a car to get there, unless you're staying nearby.

There are also several nude beaches, if that's your thing. Be aware that nude sunbathing is technically illegal, but tolerated on certain beaches. One of these is Koloumbo Beach, in the northeast corner of the island, and another is Manganari, on the south coast. Southwest from Perissa, Vlihada is a quieter beach where you can find private areas where nude sunbathing will not draw anyone's attention. There are also sections of the Red Beach where you will find nude sunbathing spots. In fact it's been called one of the best nude beaches in Greece.

Santorini has a long tradition of wine-making, which still thrives today thanks to a renaissance generally in the Greek wine industry. The volcanic nature of the terrain gives Santorini wines a distinctive taste, and as well as trying the wines in restaurants you can visit some of the wineries for wine-tastings. See our separate Santorini Wineries page for more information.

Climb uphill from the beach at Perissa and you reach the site of the ancient city of Thira. This is known to have survived the volcanic eruption thanks to its elevated position in the east of the island. The oldest finds date back to the 9th century BC, with the city being founded in the 8th century BC. Although the archaeological remains aren't as impressive as other Greek sites, its location certainly is.

When the volcano that created today's Santorini erupted, it also destroyed the Minoan city of Akrotiri. It was buried in volcanic ash and soil until the late 19th century when parts of an ancient wall appeared during excavations. It wasn't till the late 20th century, though, that a team led by Greek archaeologist Spiros Marinatos began to uncover the rest of the city.

Unlike in Pompeii, the inhabitants of Akrotiri knew that the volcano was dangerous, and they had time to leave their homes before the final massive eruption. So you'll find no bodies here, only the houses and items that the people were unable to take with them. A visit here is definitely one of the best things to do on Santorini.