The classical archaeological site of Ancient Rhamnous or Rhamnus is in a remote part of Attica and best reached from Athens by renting a car.

Rhamnous, with Evia in the Background

The classical site of Ancient Rhamnous is one of the most remote and, for this reason, one of the most appealing in Attica. However you get there (see below), you'll be glad you made the journey and you may even have the place to yourself.

You might wonder why the site is even kept open when it has so few visitors, but archaeologists have been working here since 1975 and it is one of the best-preserved sites in Attica. A lot of it is overgrown, which is also part of its charm, as wildlife is abundant here. The setting is also impressive, on a headland above the sea, with views across the Euboean Strait to the island of Evia.

Wandering around the site you are accompanied by butterflies, and by lizards that scuttle away into cracks in the rocks and stones. Nature even gives the place its name, as Rhamnous is named after a prickly shrub that grows in the area, called ramnos in Greek.

The site isn't large and it helps to know the background to Rhamnous in order to appreciate it for more than just its tranquility. Nemesis, the Greek goddess responsible for deciding whether we mere mortals should have good or bad luck, was worshipped here. The Greek gods always eventually got their revenge on anyone who offended them, hence the phrase 'to meet your nemesis'.

Some of the Persian forces who went to fight at the Battle of Marathon are said to have come ashore here, a 3-hour hike from the battlefield. It's said that the Persian defeat is down to the fact that they stole a marble block from the Temple of Nemesis, on which they intended to commemorate their victory. It was not to be. Perhaps Nemesis herself handed out some bad luck to the Persians on that day.

Although much of the site is made up of the foundations of buildings, the Temple of Nemesis can be clearly identified. This dates from about 460-420BC, and was built at the same time that the Parthenon was being built on the Acropolis in Athens. A statue of Nemesis stood inside and was made of marble from Paros.

Nearby is a smaller temple which was built with stone from Paros and dedicated to Themis, the goddess of good counsel, and whose symbol was the scales of justice. This is even older than the Temple of Nemesis, dating from the late 6th century BC. 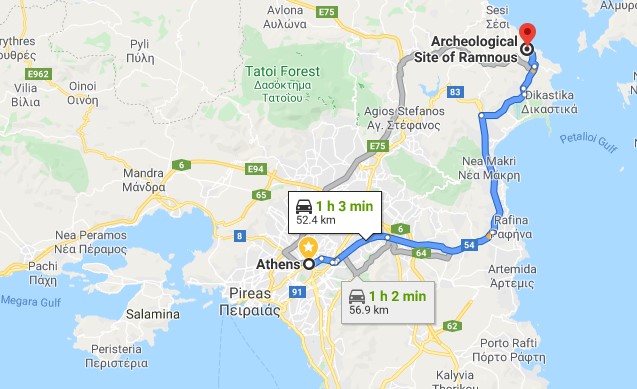 How to Get to Rhamnous from Athens

You'll need a rental car to get there, or if you're really keen to see Rhamnous you could take a taxi from Athens but it would be expensive as it's an hour's drive each way, plus waiting time. You could negotiate a day's rate with a driver.

If you're on a budget then there are a few buses a day from Athens to the nearest village, Kato Souli, but then it's a 90-minute walk to the site, or a taxi, and you'll have to double-check the bus times.

How to Get to Rhamnous from Athens Airport

If you pick up a rental car at the airport, it's an hour's drive north to get to Rhamnous. The nearest accommodation to Rhamnous is about a 30-minute drive away, but there are some nice, laid-back, small beach resorts along this coast. It would make a good and very Greek first night in the country, to collect your rental car at the airport, drive to Rhamnous and explore, and then kick back for your first night in one of these little beach towns.

Some other Attica pages