Straddling the main road that runs from northwest Greece to Thessaloníki is the unassuming-looking site of Pella. As you approach, it is hard to believe how important this once was, but it was at one time the capital of Macedonia. More than that, it could be regarded as the first capital of the state that was recognisably modern Greece.

Pella was the capital of King Philip II of what was then called Macedon, and when Philip defeated the Greek armies in 338 BC he united under his banner for the first time the various city-states that until then had been almost constantly at war with each other, creating a union which covered much of what is now modern Greece.

Pella was not only the capital of King Philip II and his son, Alexander the Great, it is also where both of them were born. 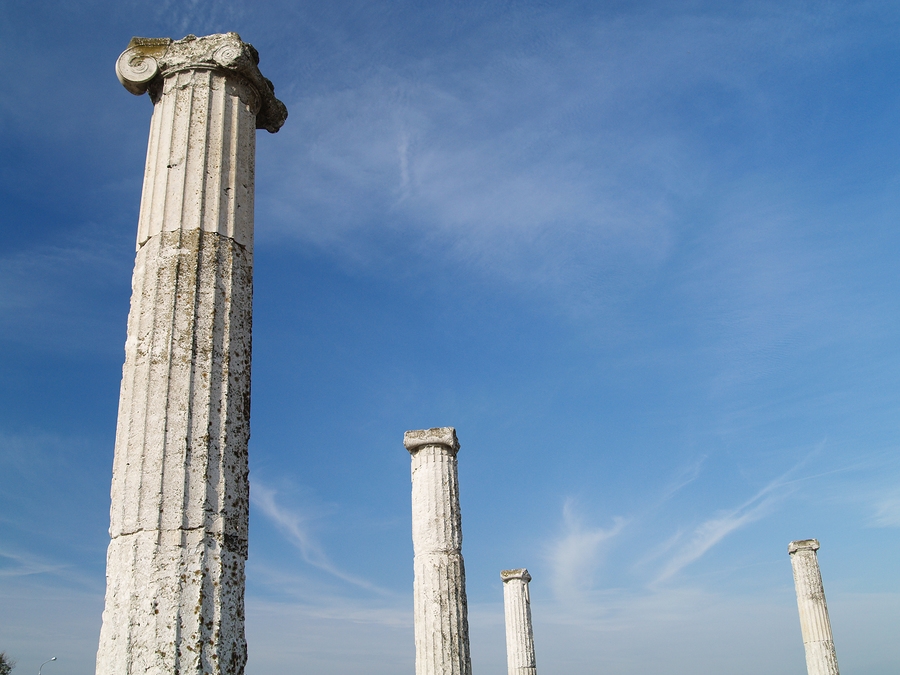 More than for its historical significance, though, there is one over-riding reason for visiting Pella and that is to see the magnificent mosaics that have survived here. They are easily among the finest ever to have been discovered in Greece, and some are still in situ. These are naturally protected from the elements, and mostly date from about 300 BC, not long after the death of Alexander the Great.

In addition to their historical significance and huge scale, they are also exquisite works of art. Many of them depict hunting scenes, including naked hunters attacking a lion with clubs and swords, a deer being attacked by a griffin, the hunting of a stag and what is regarded as the finest mosaic of them all, the God Dionysos riding a panther.

The House of the Lion Hunt

Many of these are the floor mosaics in what is called the House of the Lion Hunt, which is thought to have been an official building of some kind. It had 12 rooms ranged around three open courtyards, and was some 90m long and 50m across.

There are the remains of more modest buildings around it on the site, from which a sense of the living city can be gained. Across the modern main road is the site museum, which contains several more mosaics that have been removed from the site, as well as statues, ceramics and other items found there.