The Prespa Lakes in northwest Greece is one of the most beautiful parts of Greece with abundant wildlife and also many ancient churches. 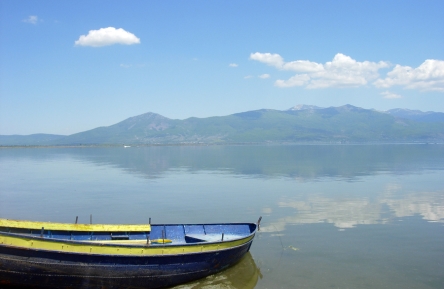 In the remote northwest corner of Greece, where the Greek border meets the borders of Albania and the Republic of Macedonia, stand the Prespa Lakes. In fact the three borders meet in the middle of the larger of the two lakes, the Great Prespa or Megáli Préspa, while the Mikrí Préspa or Little Prespa Lake is divided between Greece and Albania.

As recently as the 1970s no visitors were allowed near this area, as the border with Albania was a very sensitive political area. To visit it required advance permission and you had to be accompanied by a soldier at all times. Because of this, the region is much less well-known than other parts of Greece, although it is a unique, idyllic and breathtakingly beautiful part of the country.

Human visitors may have been restricted some years ago, but that has never applied to the wildlife, for the Prespa National Park is a vital European breeding ground for many species. Visitors must be sensitive to this at all times, and an educational visit to the Information Centre in the tiny village of Ágios Germanós is the best way to start any trip here. It gives a great deal of information about the area in several languages, and provides leaflets and walking maps, as well as selling local produce and craft items.

Dalmatian Pelicans and Other Wildlife

Among the wildlife dependent on the habitat of the lakes is the Dalmatian Pelican. It's estimated that there are about 1,400 breeding pairs at the Little Prespa Lake, making it the largest single breeding colony in the world for these birds, of which only 10,000-20,000 are thought to survive from a population which was once in the millions.

Sometimes the birds will fly further south to the island of Corfu, if winter in the mountains here is particularly hard and long. You are also sure to see many other species of birds that like to live around water, such as herons, cormorants, egrets, geese, grebes and the only population in Greece of the rare goosander. In the skies you will also see a variety of raptors, including the golden eagle, short-toed eagle, booted eagle, and both lanner and peregrine falcons. Amphibians that live here include several species of frog, toads, newts and the fire salamander, while there are also 20 species of reptile – including snakes, so take care when walking – and over 1300 different plant species. It is a rich landscape indeed.

Church by the Prespa Lakes

From a cultural point of view there is another aspect in which the area is rich: churches. In the village of Ágios Germános be sure to see the 11th-century church of the same name, which is adorned with frescoes, some of them original. The church of Ágios Athanasios in the same village is also worth seeing. To see one of the area’s more unusual churches, though, you will need to take a boat ride out onto Mikrí Préspa, which can be arranged at the village of Psarádhes. The ruined Byzantine church of Ágios Akhíllios is on the small islet of the same name, where you will also be shown the ruins of a monastery and may meet some of the few families who still live here eking out a living from fishing and farming.

You can also take a boat trip out onto the larger lake, the Megáli Préspa, where the main attraction is the 15th-century church of Panagía Eleoúsas, which is built into the rock near the lake’s shore. There are other sites otherwise inaccessible, such as in icon of the Virgin Mary painted onto a rock, and in any case the boat trip itself is a wonderful experience, out in the middle of this large and peaceful lake, surrounded by hills, and with those invisible borders stretching across the waters.

It is possible to visit the lakes on a day trip from somewhere like Kastoriá, but if you wish to stay overnight you would need to book ahead at busy times of year as accommodation is limited. There are a few guesthouses in Ágios Germanós, which also has the area’s only Post Office, with more accommodation available in the lakeside village of Psarádhes. Wherever you stay, the accommodation will be simple as this is not an area for mass tourism, and hopefully never will be.