Corfu’s small archaeological museum holds two of the finest treasures of ancient Greece, the Gorgon pediment and the Lion of Menekrates. 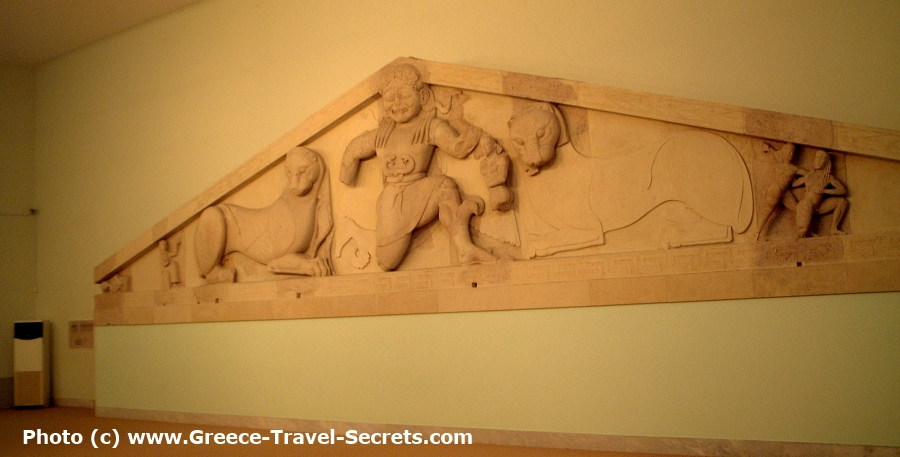 Corfu’s archaeological museum may be small but it holds two of the finest treasures of ancient Greece. The Gorgon pediment is thought to be the country’s oldest surviving monumental sculpture, while the lovely Lion of Menekrates is among the earliest stone animal carvings. Although Corfu may have few remaining archaeological sites that can be seen, these relics attest to the richness of its ancient past.

Most of the exhibits, brightly lit and well-displayed, are in six rooms on the second floor. At the top of the stairs, the vestibule contains grave monuments from an ancient cemetery in Garitsa, including a 6th century BC burial pithos (urn) with the bones of a child. 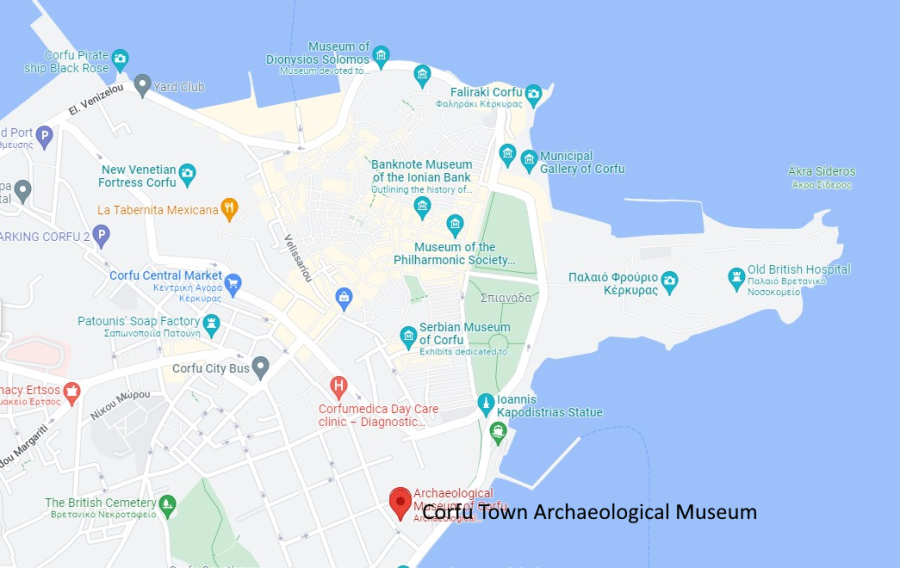 The central room holds the exquisite Lion of Menekrates. The lifelike, crouching stone figure was carved in the late 7th century BC by an unknown Corinthian artist. It was found near the Tomb of Menekrates in 1843, and is thought to have guarded the grave of a warrior.

Behind a dividing wall, the Gorgon room is dominated by the enormous west pediment from the Doric temple of Artemis (585 BC) at Palaiópolis measuring 17 meters (56 feet) long and 3 meters (10 feet) high. The frightening figure of Medusa with bulging eyes and snakes hissing at her head and waist practically pops out of the frame. Beside her are two fierce panthers and her sons Pegasus and Chrysaor. The gorgon haunts you long after you leave the room.

Go into the central room of the museum first, and around the wall behind the Lion of Menekrates, to get the best first view of the stunning Gorgon frieze.

According to Greek mythology, the gorgons were three hideous female creatures with fangs, bronze wings and live snakes instead of hair. Medusa had once been a beautiful maiden, but when she boasted that she was lovelier than Athena, the angry goddess turned her into a gruesome monster. Because of her appearance, she had the power to turn anyone who gazed at her into stone.

Unlike her sisters, Medusa was mortal. She was killed by Perseus, who cut off her head while looking at her reflection in a mirrored shield. Her two sons, the winged horse Pegasus and the hero Chrysaor, sprang from the blood which spurted from her neck.

The adjoining Mon Repos room features objects excavated from the Mon Repos estate on the Kanóni Peninsula. They include some splendid small objects, such as the Little Lion tripod decoration, the bronze statuette known as Lakon Komastis, and a four-horse chariot and charioteer. The remaining rooms contain pottery, statues, artefacts and the museum’s large numismatic, or coin collection.

In the Apollo Parnopios room, look for the display of bronze medical instruments in a case along the outside wall – and use your imagination!