The villa of Mon Repos to the south of Corfu Town was once the summer home of the Greek royal family but now houses the Museum of Palaiopolis. 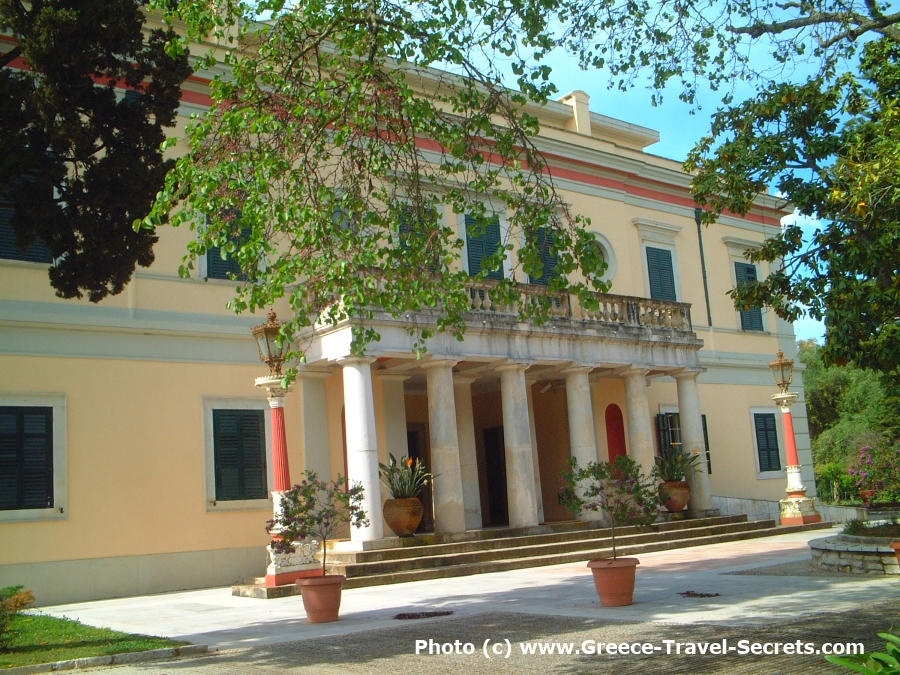 After years of neglect, the elegant villa of Mon Repos was beautifully restored and since 2001 has housed a fabulous museum dedicated to Corfu’s ancient city, Palaiópolis. It occupies a prime spot on the Kanóni peninsula, surrounded by lush wooded grounds that make a cool and peaceful retreat.

Getting to Mon Repos

Mon Repos is a pleasant half-hour walk south along the seafront from the Spianáda, although the last stretch turns inland along the shoulder of a busy road. If driving, There is limited parking in a small parking area opposite the entrance to the grounds, or along the road.

The parking area is hard to spot so drive slowly as the one-way system will soon have you whizzing past it with no chance to turn around. We speak from experience!

Sir Frederick Adam, the second British High Commissioner, built this neo-classical summer palace for his Corfiot wife. Designed by Sir George Whitmore, architect of the Palace of St Michael and St George, it was completed in 1831.

The villa was used for various cultural purposes from 1832 until 1864, when it was given to Greece’s King George I, who named it Mon Repos. It remained a summer house for the Greek royal family until 1967. Prince Philip, the late Duke of Edinburgh, was born here in 1921.

After years of legal wrangling over the ownership of the mansion, the Municipality of Corfu took over and restored it handsomely inside and out. From the side terrace there is a lovely view over the hillside to the sea.

Important archaeological sites from the ancient city of Palaiópolis surround Mon Repos, and the mansion was converted into a museum to display its artefacts. Exhibits are well displayed and informative, presenting a fascinating picture of the house and the area, its history and ancient culture.

On the ground floor, the two rotunda rooms depict the Regency style that Adam and his wife enjoyed during their occupancy. Other rooms contain photos, prints and historical documents, Classical sculpture, and drawings of local flora and exotic plants. Room 7 contains a timeline and a wonderful scale model of the town with buttons which light up the peninsula’s ancient sites.

In Room 12, look for the lovely little terra cotta statuettes of female circle dancers, depicting a ritual of worship in the late 6th century BC.

Upstairs on the first floor, the rooms surrounding the pretty atrium contain interesting exhibits on life in ancient Kérkyra. Exquisite items from Corfu’s Mediterranean sea trade, the production of wine and olive oil, the ancient marketplace and bathhouses, and deities and sanctuaries are among the topics explored.

There is also a gallery of photographs from the archaeological excavations. On the second floor there is space for temporary exhibitions.

The lush grounds surrounding Mon Repos are a delight, especially on a hot summer’s day. Follow the path behind the villa that leads to the 5th century BC Doric Temple, the best-preserved site of Palaiópolis, in a sunny spot overlooking the sea. It leads through a canopy of enormous olive and fig trees, and past the ruins of the Heraeum temple.

Across from the entrance to the grounds is the impressive shell of Palaiópolis church, a 5th century basilica and the oldest church on the island.