From Athens there are several buses a day to the centre of the universe. That is how the ancient Greeks regarded Delphi, where the famous oracle who could predict the future and also offer advice on people's problems was to be found. 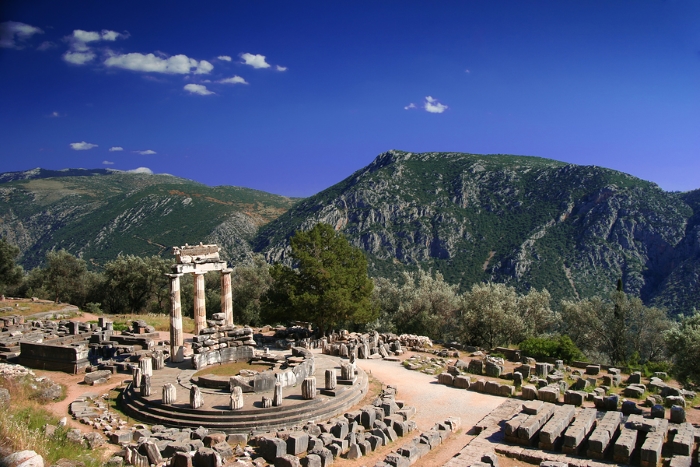 In addition to the regular public bus service you can also easily drive the 111m/178km from Athens on good roads that skirt the edge of the Parnassus Mountains, on the slopes of which the site of ancient Delphi stands.

It's an exhilarating drive, which should take about two hours if you take the fast toll road, or perhaps half an hour longer if you want to avoid the tolls. Or you can do it the easy way and book one of the coach excursions which you can arrange in any travel agent or through most hotels.

If booking a trip, try to find one which also visits the stunning monastery at Ossios Loukas on the way to Delphi, or allows time in the nearby mountain village of Arachova, which is also recommended if you plan an overnight stay, though there are also plenty of accommodation and eating options in the modern town of Delphi too, which is much closer to the ancient site. 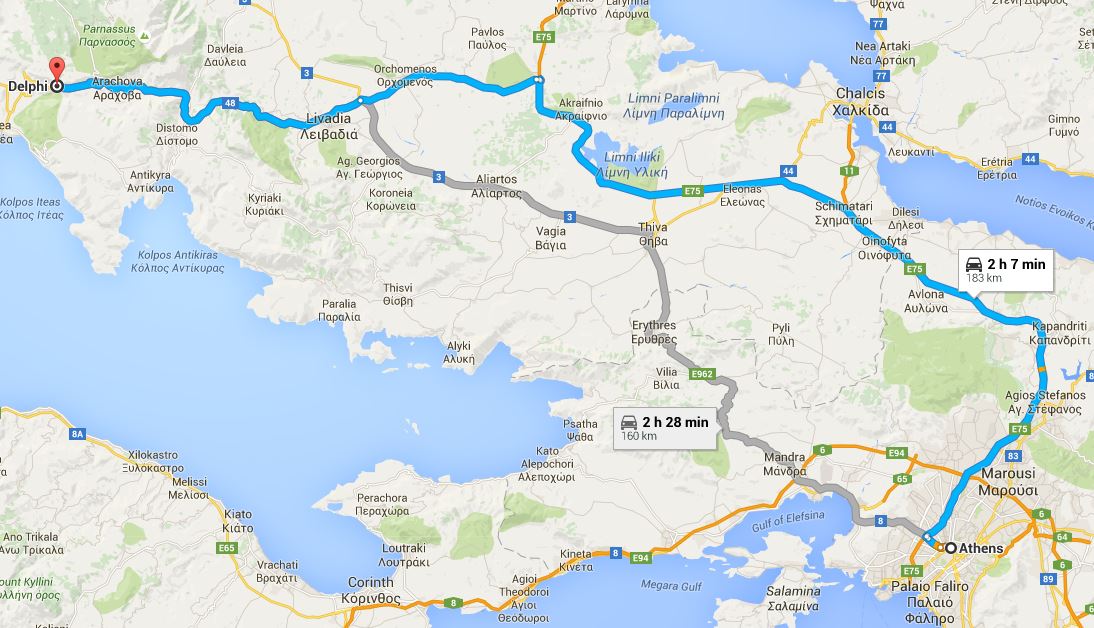 Athens to Delphi via Toll Road

At Delphi you find the modern town, which is a pleasant-enough mountain village though these days mostly devoted to tourism. The ancient site of Delphi, on the edge of the town, is quite rightly a magnet for tourists and cruise-ship passengers, and on summer days both the site and the town can be crammed with visitors.

Try to avoid peak periods if you can. Staying overnight in Delphi and getting to the site late in the day, or as soon as it opens next morning, is one way to beat the crowds and is easily done from Athens. If you have a car, basing yourself at nearby Arahova is more of a Greek mountain village experience.

The site, known overall as the Sanctuary of Apollo, is quite large and sprawling, with some tucked-away corners, and it could take two hours and more if you want to see everything.

You enter the site along the Sacred Way, which at one time led all the way from Athens to Delphi. On either side you will see the ruined remains of numerous memorials and treasury buildings, where pilgrims would leave their offerings, or which would be erected afterwards as thanks to the oracle.

The Sacred Way zig-zags its way up towards the Temple of Apollo, where the Oracle's mouthpiece, a priest, would deliver the Oracle's predictions and pronouncements. The six columns that can be seen standing today were in fact repositioned to give an impression of the Temple's look and scale, as only the foundations remained when it was first uncovered.

Beyond here are the remains of a theatre, and further on still, and easily missed, the impressive remains of an athletic stadium. The theatre dates from the 4th century BC and in its prime would have held 5000 people, while the stadium was even larger with stone seating for 7,000 spectators.

It is up here at the back of the site, where few of the organised groups have time to venture, that you might get some peace on busy days. Behind you are the Parnassos Mountains, where eagles and hawks fly, and you may have some idea of why this was regarded as the centre of the universe in ancient times. It received pilgrims from the 12th century BC right through to the 4th century AD.

Along the main road on the left, and separate from the main precinct, is the Castalian Spring, where visitors to the site had to purify themselves first. Further on still, on the other side of the road, is the Sanctuary of Athena, Athena being worshipped as the Guardian of the Temple.

Even Google Street View Has Been to Delphi!

West of the ancient site is the excellent museum, probably the best in the country outside Athens. It isn't huge but the finds that have been made here and are on display are truly fabulous. The most famous of all is a 5th century BC bronze called The Charioteer, which is both life-size and very lifelike, its eyes of onyx giving an eerily human feel to its gaze. Nearby is a huge marble carving of three dancing women – not to be missed.

The shop at the Archaeological Museum is very well-stocked with cards and reproductions of some of its exhibits. It's worth saving some time to spend there, if on an organised tour where your departure time is fixed.

For more information and to check opening times see the Greek Ministry of Culture websites for the Archaeological Site of Delphi and the Delphi Archaeological Museum.

Note that the Ministry of Culture website isn't always totally up-to-date for every single site and museum, so it helps to double-check.