Arachova is a mountain town in the Parnassus Mountains of Greece and a good base for visiting the ancient archaeological site of Delphi, a 15-minute drive away. 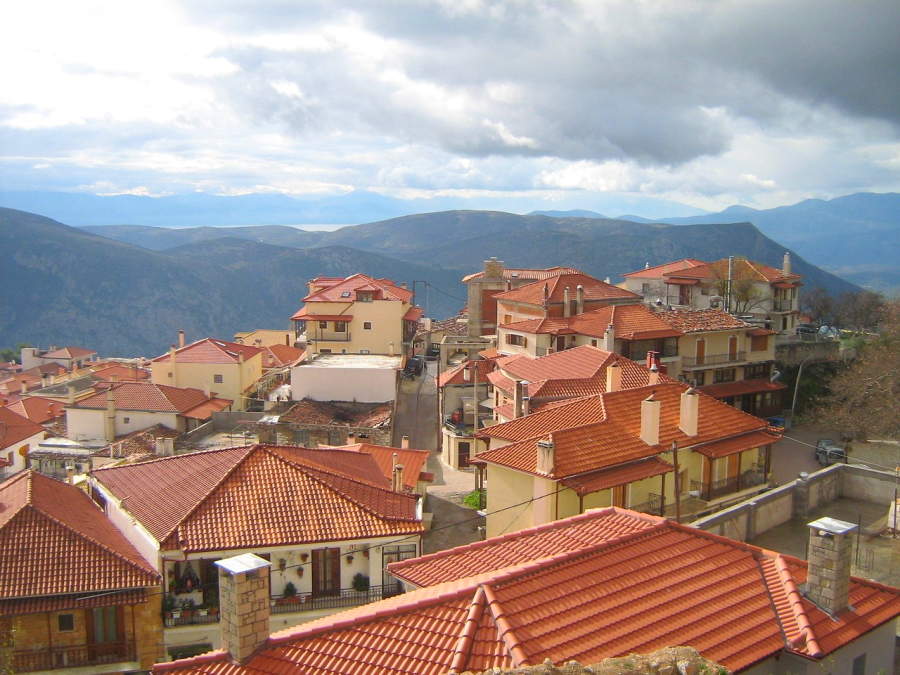 Despite being just 7 miles (12 km) from Delphi, this delightful mountain town is little affected by tourism, other than the coaches and cars which sometimes stop off here to shop in the souvenir shops lining the main road. In winter, though, it's become such a popular spot with Athenians because of the nearby ski resort that it's sometimes referred to as the Winter Mykonos, with nightlife to match.

Roadside stores are lined with shops selling flokatis, which are colourful woolen rugs/blankets, excellent for keeping out the cold mountain air during winter, when temperatures can drop below freezing. Arachova is at an altitude of about 950m (3,117ft). These flokatis used to be home-made but many of them now are imported and machine-made, and if you want to learn more about the town's weaving tradition visit the Ethnographic Museum.

Beyond the main street, however, the traditional life of Arachova goes on, as you will see if you spend a night or two here, which we highly recommend. Once the coaches and cars have disappeared, locals reclaim the main street for their evening volta, as they walk around and socialise before dinner.

Away from the main road you find narrow streets of traditional houses, and tavernas serving hearty mountain food. The region is especially known for its cheeses and robust wines. 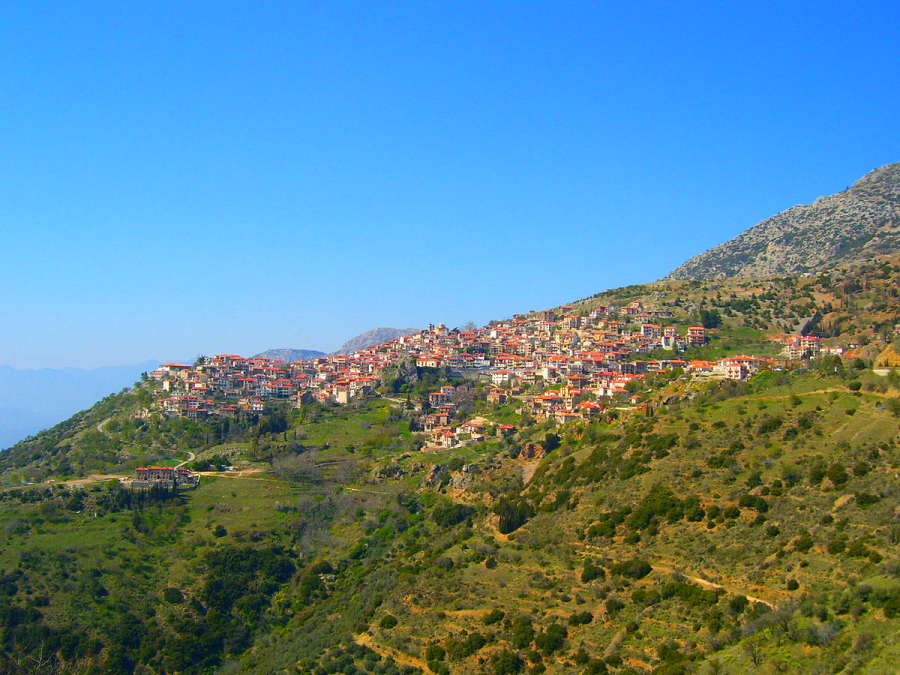 The cheese local to Arachova is called formaela, and you should definitely try this. It's made either from sheep's milk or goat's milk, and is a hard and slightly yellow cheese. It's usually served roasted, fried, or grilled, and with a few drops of lemon juice squeezed over it. Other local produce to try and/or buy includes honey, figs, tsipouro, and many other treats.

Things to Do in Arachova

There aren't a lot of things to do in Arachova itself, but it's a good place to hang out, go hiking, go skiing in winter, and visit Delphi.

In the town itself be sure to walk up the 264 steps to see the main church of St George, but also wander the town as there are a number of Byzantine churches too, with ancient and well-preserved frescoes. There's also the Ethnographic Museum where you can learn all about local history, arts and crafts. 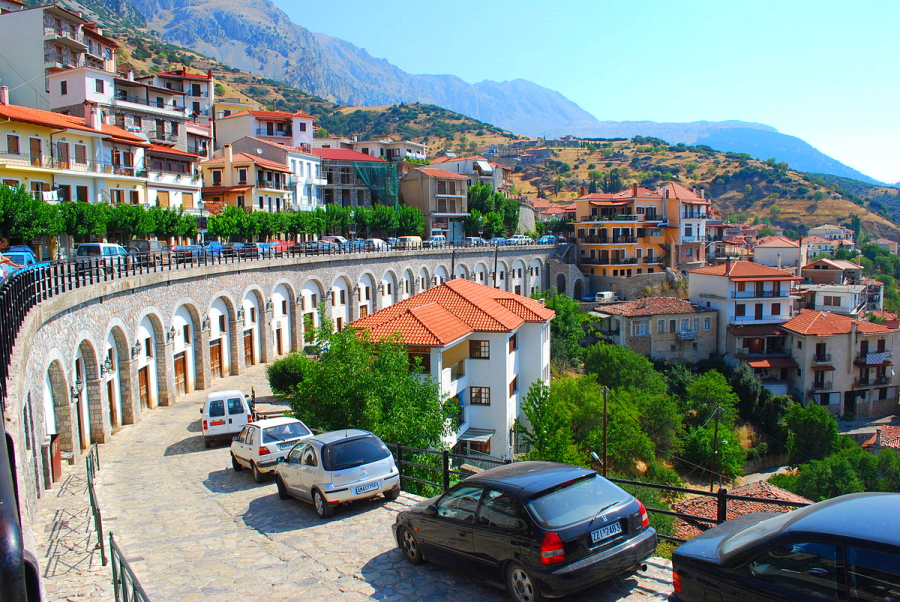 If you're based in Arachova, it's easy to get out and hike around the lower slopes of the Parnassus Mountains. You can either arm yourself with a good map or hire a local guide and discover places you might not find on your own. If you do go out by yourself, check the weather forecast first as it can change quickly in the mountains. Also let someone at your accommodation know where you're going, and when you hope to be back.

One of the best times to visit Arachova (though you'd better book well ahead, or have friends in the town) is for the Festival of Ayios Yiorgios, St George, to whom the main church is dedicated. This takes place on April 23, or on the Monday after Easter Monday if April 23rd falls during Lent, though the fun spreads over a few days. The church is the main hub for activities, and you'll experience lots of traditional dancing and music, people wearing traditional clothes, and processions, as well as plenty of eating and drinking. 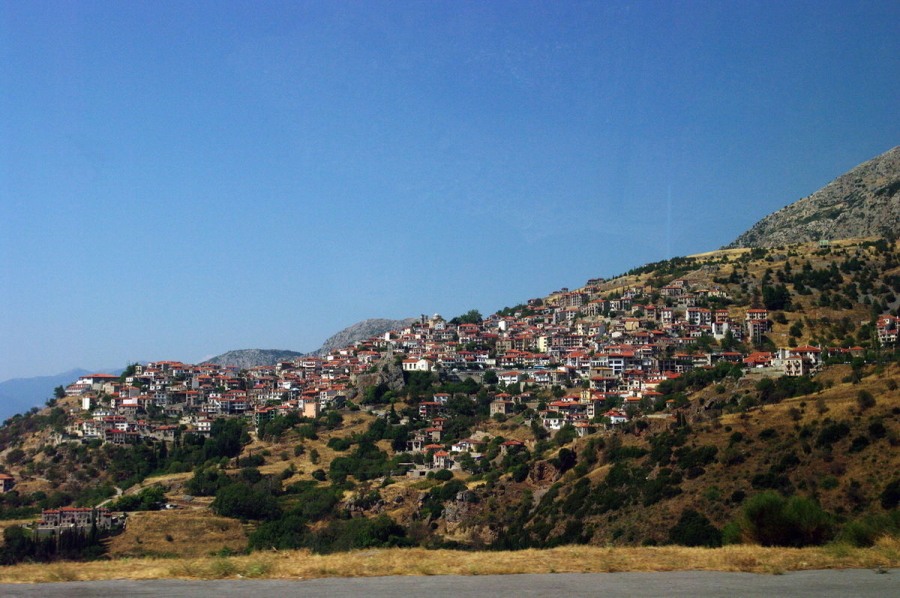 Arachova in the Parnassus Mountains

Arachova gets busy on winter weekends as it's only a 15-minute drive from here to the Parnassus Ski Centre, Greece's largest ski resort spread across three main areas and with 23 slopes. As there's no accommodation at the resort itself, Arachova is the place to be, as you can't get to the centre from Delphi without passing through Arachova.

If you have your own car then Arachova is the perfect base for visiting Delphi, a 15-minute drive away. Of course you can always stay in the town of Delphi itself, and walk to the ancient site and to the museum, but we find Arachova more authentically Greek and less expensive. You can get to the site when it opens, or linger later in the day, after the tour buses have left for their 2-3 hour journey back to Athens. 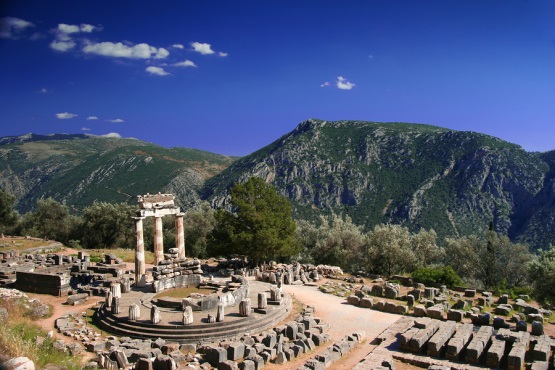 If you don't have your own transport then you can take a taxi each way: there are taxi ranks in both Delphi and Arachova. There's also a local bus service a few times a day, and every couple of hours the bus from Athens to Delphi will stop off in Arachova. If using the bus, double-check the times and be prepared for the Athens bus to be full. We recommend making life easy and taking a taxi: they're not expensive.

If you're feeling ambitious, and fit, then you can hike from Arachova to the Corycian Cave, which is dedicated to the god Pan and the nymph Corycia. This is an uphill hike of about 3.5 km (2.2 miles). The European-wide E4 hiking trail also goes close to the cave, and you can take this slightly longer hike down to Delphi. After that, and exploring the ancient ruins, you might be ready to take a taxi back to Arachova.

Where to Stay in Arachova