Ossios Loukas is a Byzantine monastery that stands between Athens and Delphi and is the burial place of the Greek hermit, Blessed Luke. 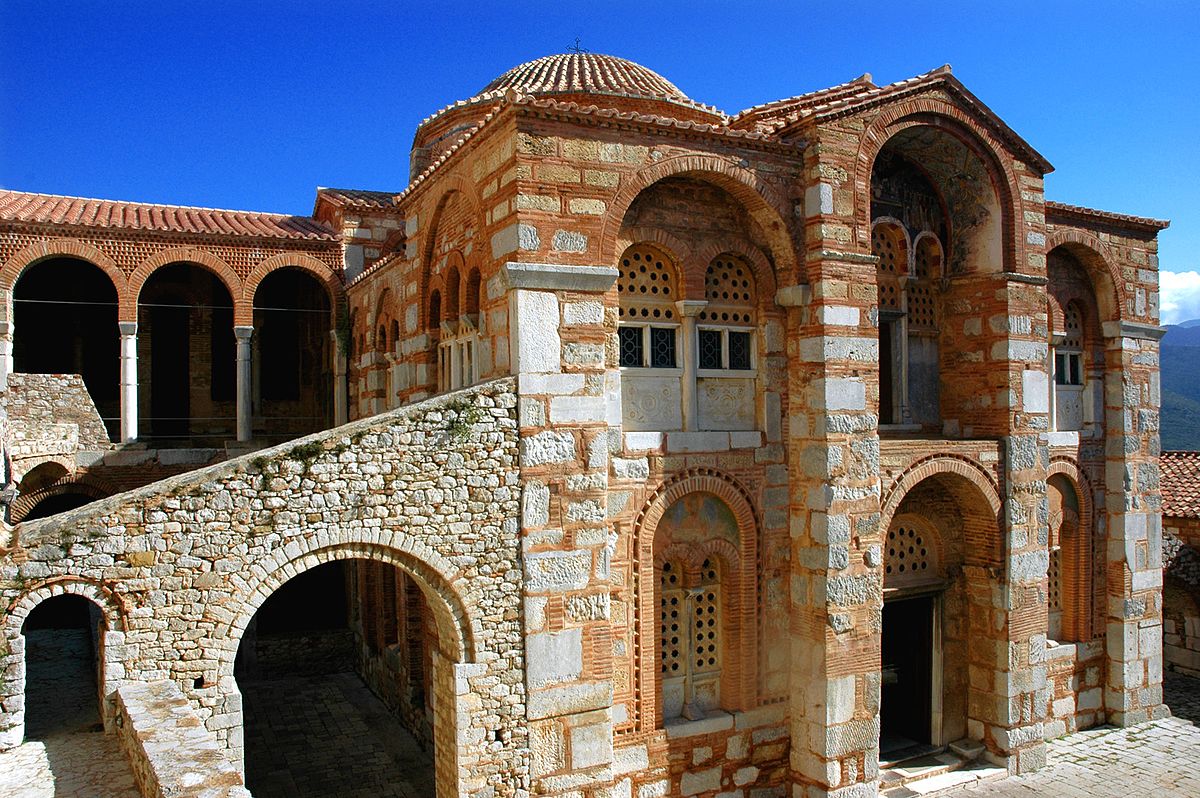 The monastery of Ossios Loukas (or Osiou Louka, the name meaning Blessed Luke) stands alone in an olive tree-filled valley a short way down a side road off the main Athens-Delphi road. The saint to whom it is dedicated was a Greek hermit, not the more famous gospel writer. This St Luke died in 953AD and is buried in a crypt at the monastery.

The chapels here are among the best examples of Byzantine architecture in Greece, and have some of the country's finest preserved frescoes. Despite its isolated position, Ossios Loukas is usually busy, not just because of the frescoes or the reverence for St Luke, but because it makes a convenient second stop for tours on a one-day trip from Athens to see Delphi. The monastery is about a two-hour drive from Athens, and 45 minutes from Delphi.

The Life of St Luke 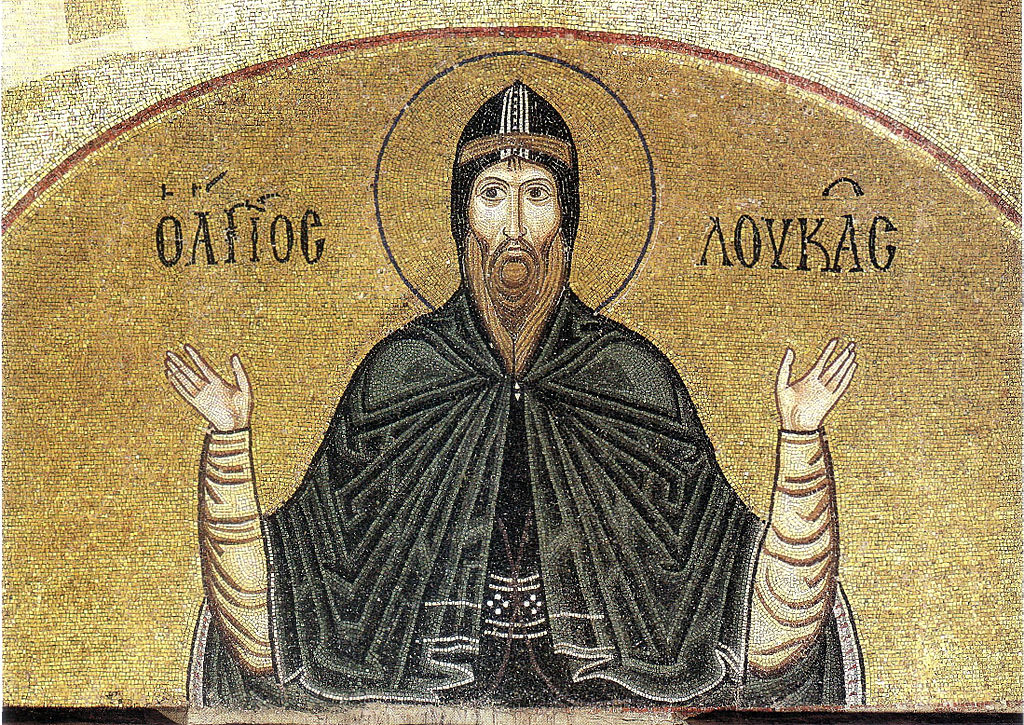 St Luke was probably born in Delphi in 896AD, to parents who had fled from Aegina to escape the Saracens. Known to be spiritual and somewhat other-worldly, Luke left home in his teens to seek solitude. He gained a reputation as a healer, and was soon credited with miraculous cures. Eventually Luke settled in the nearby village of Stiri, and the first church on the site of the monastery was built between 941 and 944 and dedicated to St Barbara. 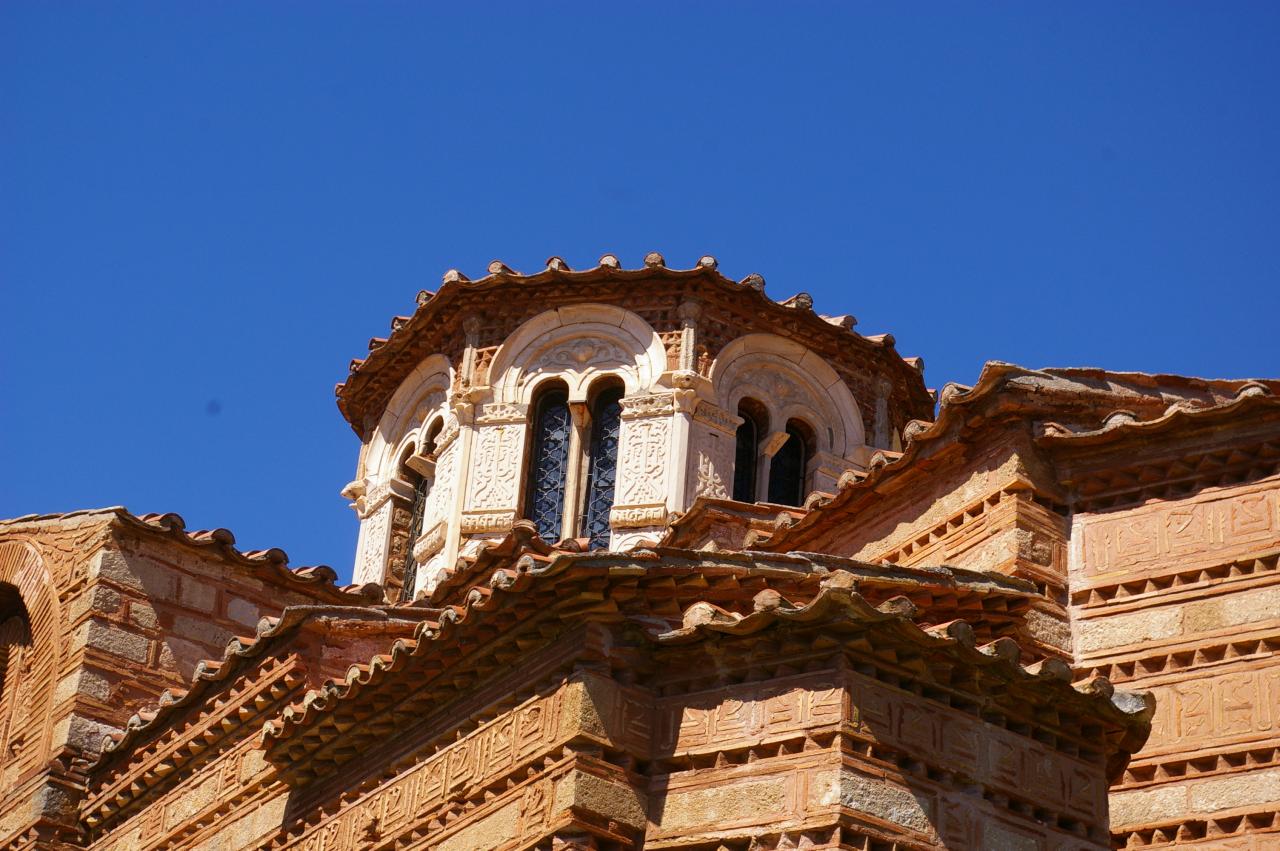 By this time Luke had also developed a gift for prophecy, and among his predictions was one that Crete would be liberated by an emperor named Romanos. In 961, eight years after Luke's death, Crete was taken from its Arab rulers by the Byzantines under the Emperor Romanos and, in recognition of Luke's prophecy, Romanos built a large church alongside that of St Barbara. 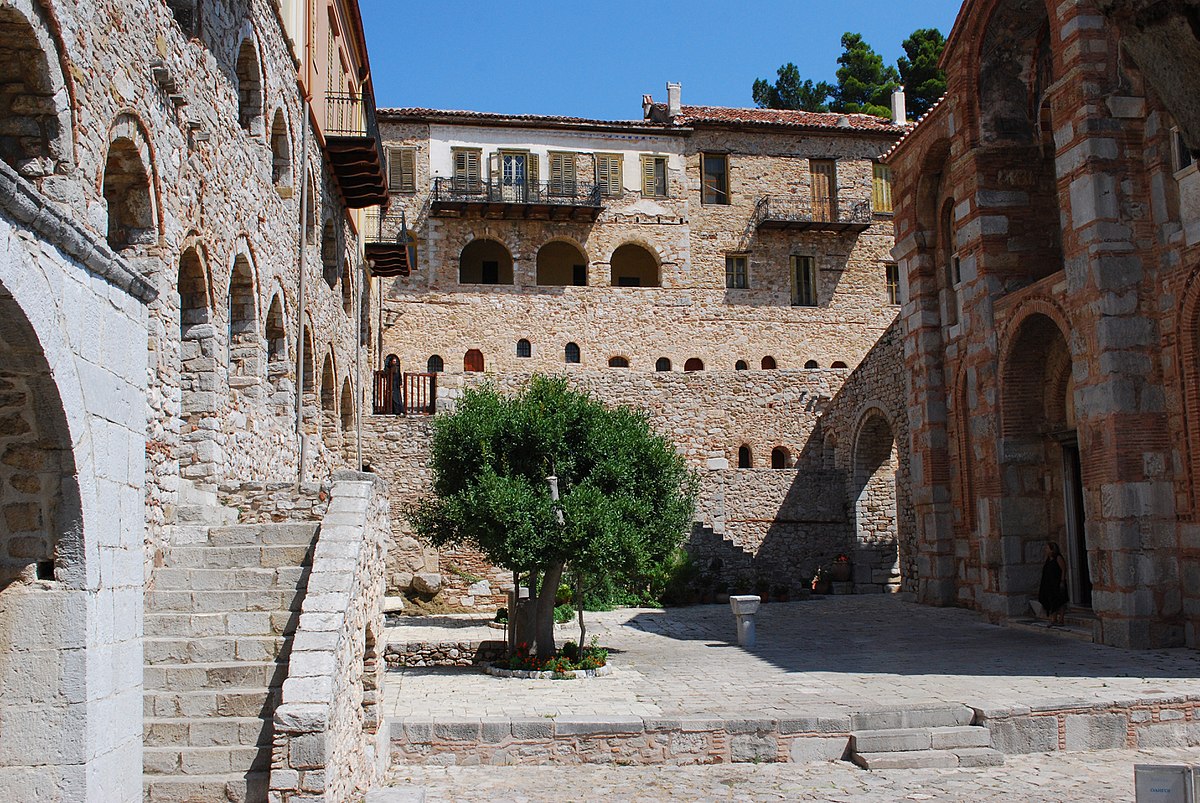 The first thing to greet you when you arrive at Ossios Loukas is a glowing gold mosaic of the saint on an arch over the entrance gate into the monastery proper. The original church that was built by Romanos was replaced by one built in 1020, known as the Katholikon.

It is an awesome experience to enter the tall building, with its marble walls, and see the light slanting in from high windows onto the ancient frescoes, some of which date back to the original building of the church at the start of the 11th century, a thousand years ago. However, many of the frescoes were repainted after an earthquake in 1659 damaged the monastery.

Finest of the Mosaics 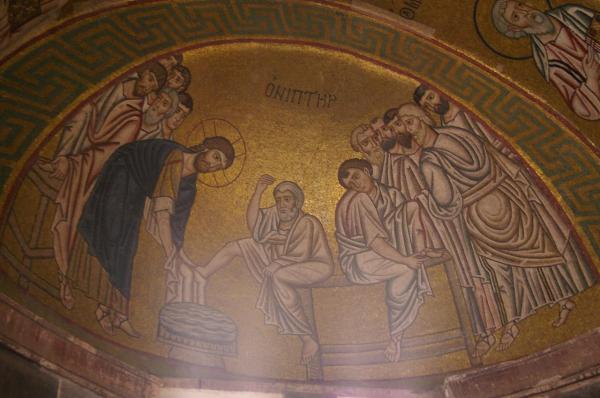 The Washing of the Apostles' Feet

The finest of the mosaics is said to be "The Washing of the Apostles' Feet", which is in the narthex, high up to your left as you enter the main, western door. It is a striking work, not only for the bright gold and other colours that remain, but for the very human expressions on the faces of the apostles. It helps to have binoculars with you to have a good look, or a good zoom on your camera.

Beneath the Katholikon is a crypt with the body of St Luke. There are also more frescoes here dating back to the 11th century, although it is fully difficult to appreciate them as the light is kept low, both out of reverence for the remains of the saint and also to help preserve the frescoes 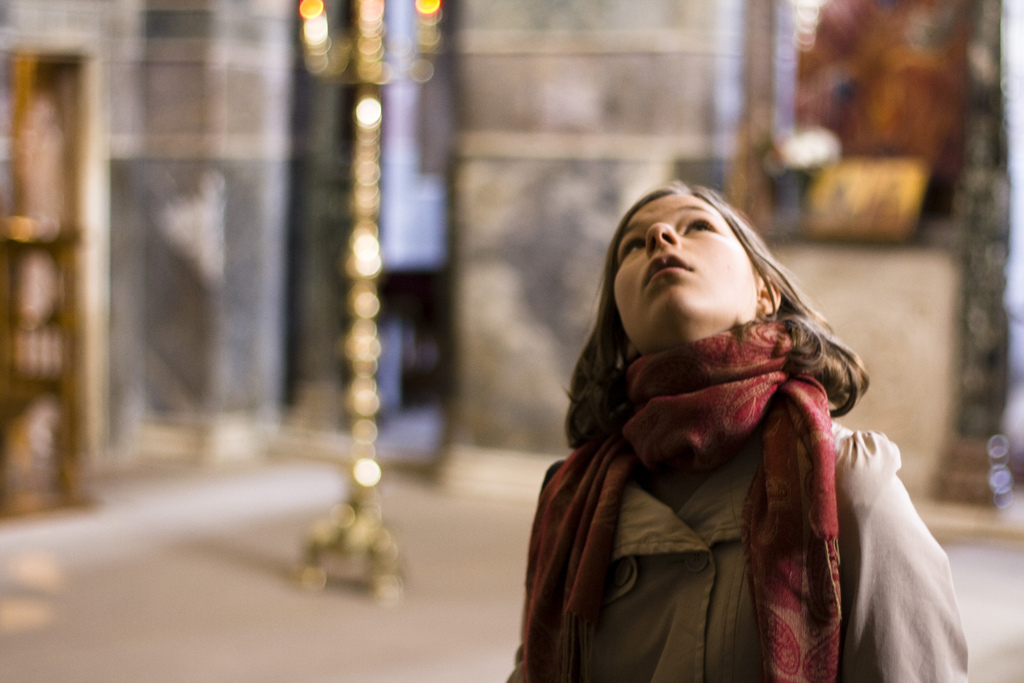 Church of the Theotokos

In an unusual arrangement, the smaller church of the Theotokos (The God-Bearing, in reference to the Virgin Mary) is connected to the larger church. The Theotokos is thought to have been built in the years 997-1011, so it is slightly older than the Katholikon. Its mosaics are easier to see, most being on the floor. Note, too, the elaborate exterior brickwork.

The View from the Terrace 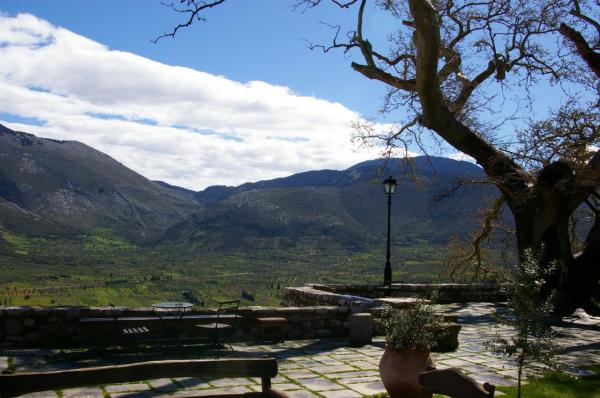 The monastery also has outbuildings that can be explored, as well as a museum containing finds from the site, and shops, which indicates the popularity of the place for pilgrims and tourists alike. Don't miss the terrace, which gives wonderful views across farmland and groves of olive and almond trees to the Elikonas Mountains beyond.

Only a handful of monks still live at Ossios Loukas, and the daily round of visitors is a necessary interruption to their monastic life, to help with the upkeep of the monastery. Lucky is the visitor who arrives here to find the tranquility that the monks themselves seek out, and can perhaps share it with them, if only for a while. If you want to enjoy the place in as peaceful a way as possible, arrive early or late in the day to avoid the crowds. If that isn't possible, you should still go as it is a very magical place.

Icons have become universal in our modern world, but the specific meaning goes back to the Greek word eikon, meaning an image of a person. In some churches that is all it is: an image or depiction of a saint or other holy person. In Eastern Orthodox religions like the Greek Church, however, the image itself is sacred. When you visit a church and see worshippers kneeling before an icon, or kissing it, they believe they are communicating directly with the person portrayed.

Icon painting in Greece goes back to the earliest days of Christianity and continues today. Greeks still buy icons, both large ones to hang at home and small ones for their cars, and they make unusual souvenirs.

Some Central Greece and Thessaly pages