Kythira is technically one of the Ionian Islands but not geographically close to the others in the group as it sits on its own at the foot of the Peloponnese. It is much closer to Crete than to its nearest main Ionian neighbour, Zakynthos. It’s a large island but with a relatively small population, and fewer visitors than most other islands.

Kythira is known for its steep cliffs, its rugged bays, and the strong winds which created both these features. The seas around here can still be rough, with ferries sometimes cancelled, so take that into account when planning your travels. The sea here is so notorious that it was one of the factors that led to the building of the Corinth Canal, to save boats from risking the waters off the Peloponnese.

Much of Kythira is wooded, and while it isn’t picture-postcard beautiful, it does have a rugged charm. The fact that it attracts fewer visitors can be a bonus, as it gives you more of a sense of a personal discovery of a Greek island that is a little off the tourist trail.

In Greek mythology Kythira was the home of Aphrodite, the Greek Goddess of Love and Beauty. Several temples to Aphrodite used to exist on the island but there are no longer any remains of these. 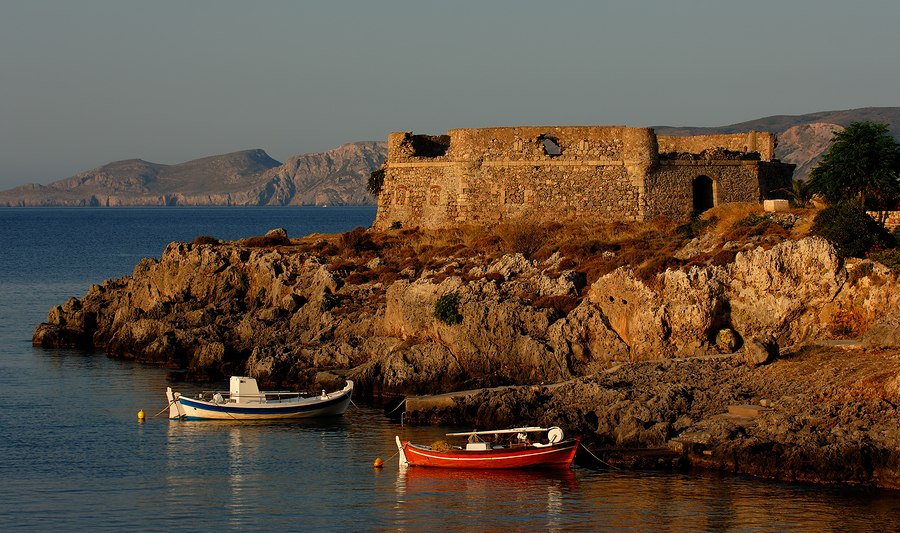 One reason Kythira is quieter is the lack of easy ferry connections. You can get there by ferry from Athens (Piraeus), and also from Kastelli in north west Crete. There are also connections from several places in the Peloponnese, including Neapoli, Gythio, and Kalamata. There are also ferries to and from Kythira’s small neighbour, AntiKythira.

Note that although Kythira doesn’t get as many visitors as some islands, it can still get busy in the summer and if you are planning to take a car you should definitely book your ferry ticket in advance to be sure of a place.

Best Things to Do on Kythira

Chora
The island’s capital is Chora, which is also spelled Hora and also referred to as Kythira Town. It’s an attractive town of whitewashed houses which overlooks a harbour on the south coast. Its visitor attractions include a 16th-century Venetian fortress and an Archaeological Museum.

Beaches
Kythira has plenty of good beaches all around the island, including some within easy reach of Chora, and others on the north west coast. Those on the west coast are a little harder to get to and therefore attract fewer sunbathers.

Cave of Ayia Sofia
This show cave on the west coast of the island has guided tours, and is named after Saint Sofia whose body is said to have been found inside the cave. A really unusual feature is the chapel inside the cave that was built by local villagers in honour of the saint.

Monastery of Ayia Moni
By Greek standards this is a fairly modern monastery, having been built in 1840 although it is now abandoned. It’s slightly to the west of Diakofti on the east coast and if you can make the climb up you get wonderful views down over the town.

Where to Stay on Kythira

More Information
Kythira has its own very thorough website:
www.kythera.gr