Corfu Town’s Old Fortress is the town’s most striking landmark, standing east of the Old Town on top of a rocky promontory.

The Old Fortress in Corfu Town

The Old Fortress is Corfu Town’s most striking landmark, visible when you approach the city by sea, by air, or along the coast road. It stands east of the Old Town on top of a rocky promontory whose two peaks gave the island its name, and it affords magnificent views over the town and the coastline north and south.

The first fortifications were built here in the 6th century, after Goth raiders destroyed the ancient city at Palaiópolis, a little to the south of the modern town, and survivors moved here to the elevated headland with its natural defences.

At the centre of the headland are two hills known as Koryfes – the Greek word for ‘summit’ – from which the town’s medieval name, Koryfo (Corfu in Latin) derived. Over time the Byzantines built up the fortifications, including walls and towers to repel raids by sea, and until the 10th century the entire town was contained within its walls. 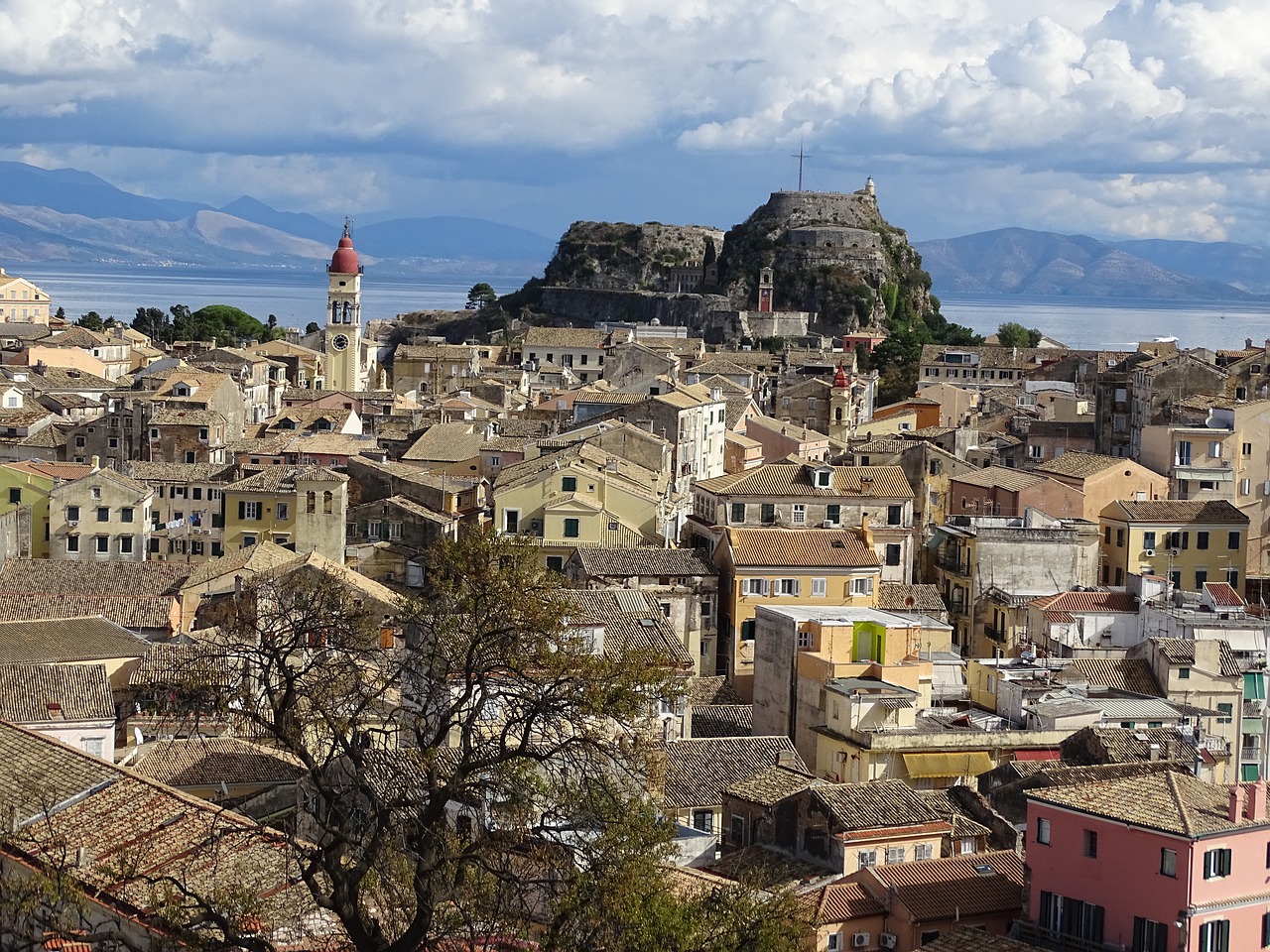 The Venetians and British

The Venetians rebuilt the walls in the early 15th century, and dug a defensive moat, the Contrafossa, which had a retractable wooden bridge. They extended and further rebuilt the fortifications between 1550 and 1588.

The British destroyed the Venetians’ base here, replacing it with a military barracks and hospital. The Greek Army used the fortress until 1979, when archaeological restorations began and it was opened to the public.

Corfu Town and the Old Fortress

Today the fort is entered from the Spianáda, via a permanent bridge across the Contrafossa, which is now a picturesque channel lined with pleasure boats. Outside the entrance is a statue of count John Matthias von der Schulenberg, a German mercenary who led the defence of the island against a Turkish invasion in 1716.

A restored gatehouse now contains a small Byzantine museum (admission included) which features sculptures and mosaics from the basilica at Palaiópolis and fresco pieces from Byzantine churches.

The Church of St George inside Corfu Town's Old Fortress

Inside the fort a right-hand path leads to the neo-classical Church of St George, a garrison church built by the British in 1840 and designed to look like an ancient temple. Restored after damage in World War II, it is now an Orthodox church.

To take photos from the Old Fortress over Corfu Town, go in the morning when the sun is at your back. You’ll get the best photos of the fort from the Spianáda in the late afternoon when it catches the softer light from the sun in the west.

The Views from the Old Fortress

A steep stone path leads up from the entrance past a Venetian clock tower to the summit of the western peak, known as the Castel a Terra, or Land Tower, with its little lighthouse. From here there are marvellous views across the Spianáda to Corfu Old Town.

To the north you can see Mount Pantókrator, resorts such as Nisáki, and the coasts of Albania and mainland Greece. To the south, the view takes in the southern sweep of the island.