Monemvasia in the Peloponnese has been called the Greek Rock of Gibraltar, a huge offshore rock which conceals a tiny town connected to the mainland by a single road. 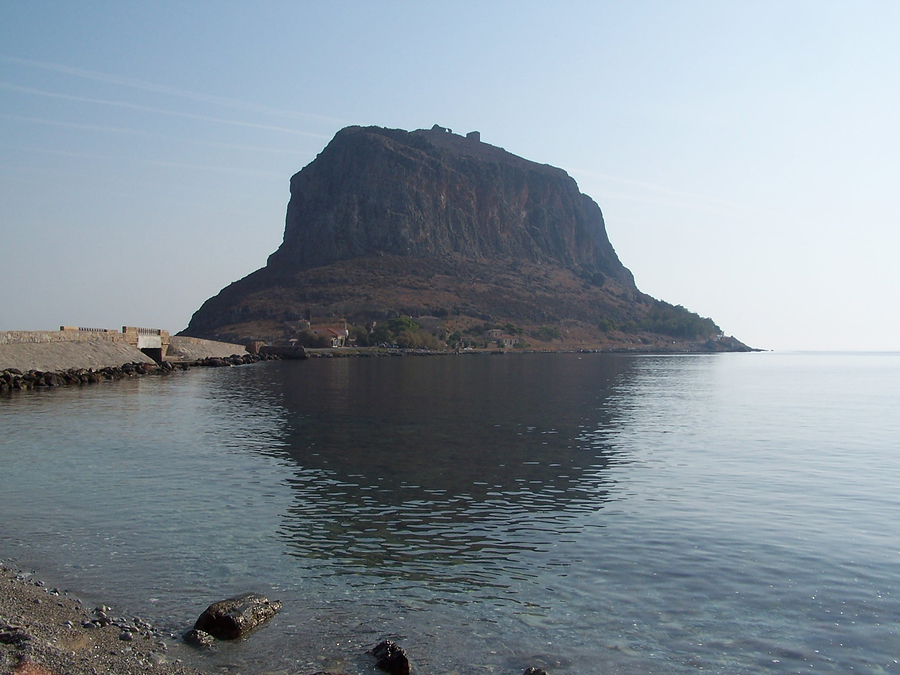 It's astonishing that the name of Monemvasia is hardly known outside of Greece, because it's one of the most extraordinary towns in the whole country. The result is that it remains relatively unspoiled, though it can get busy when there's an influx of cruise ship passengers. Those who do venture to Monemvasia can discover for themselves what a very special place it is. 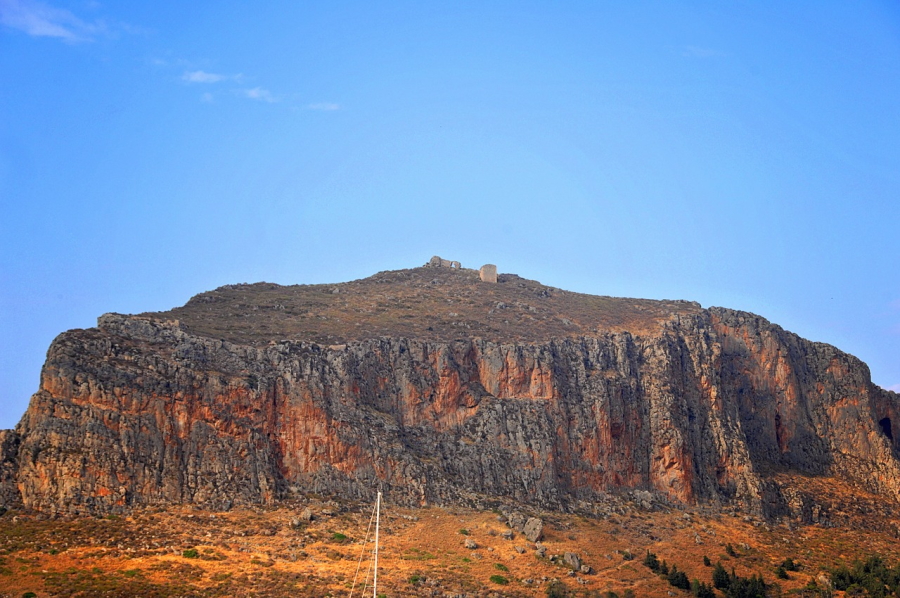 Monemvasia: The Gibraltar of Greece

A huge mountain of a rock stands offshore, linked to the mainland by a single stretch of road. This is Monemvasia, known as the Gibraltar of Greece. When you approach it for the first time you may feel that, yes, it is an impressive site, but once you've seen it, what then? Well, then you walk or drive along the road to the entrance. If you drive, be ready to leave your car outside. 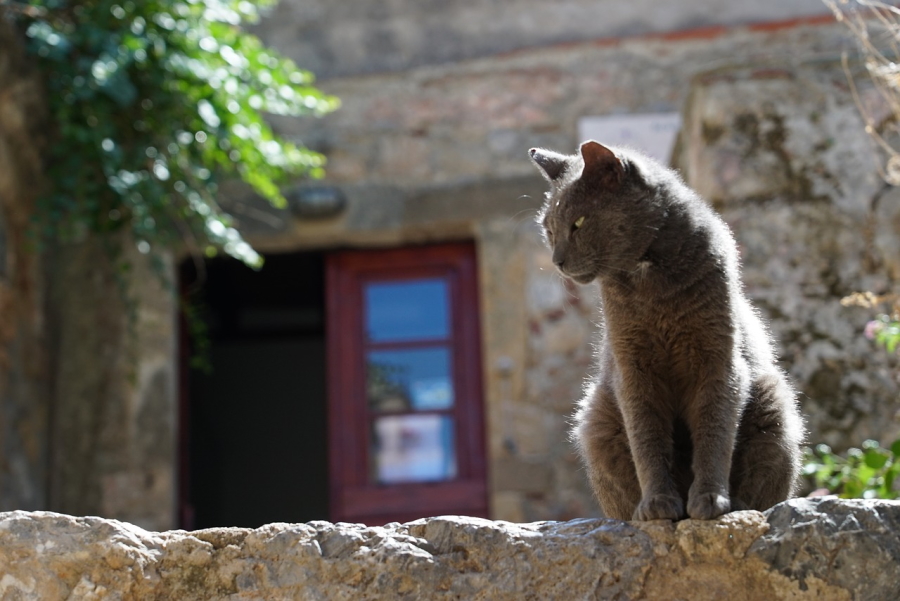 The word Monemvasia means 'single entrance'. To discover the secrets of this remarkable island you must walk through the single doorway, as if entering a medieval castle or something from Game of Thrones. The doorway is only wide enough to accommodate a loaded donkey.

As you pass through that entrance, you feel as if you're stepping back in time to the 15th century, when Monemvasia was a busy Byzantine city of some 50,000 people. Today its permanent population stands at about 50, leaving it full of ghosts and echoes of the past. Some of the old houses have been renovated and turned into hotels or other accommodation, and others have become restaurants or gift shops. 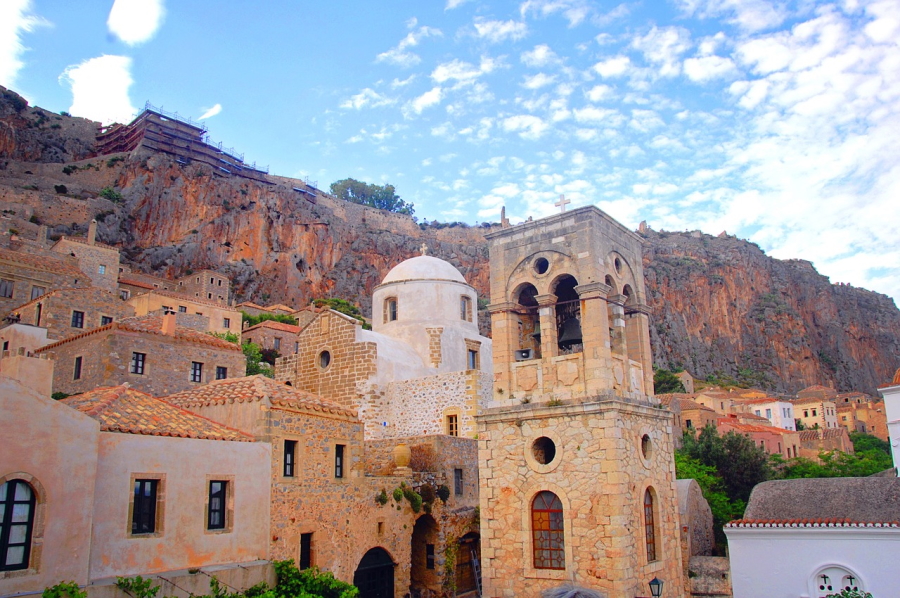 But developments have been on a very small scale and the atmosphere remains unique. The hotels are small, so if you want to stay in the old town and experience the full flavour of Monemvasia, then make reservations well ahead. There are also several small and simple hotels in the modern town across on the mainland, where the bulk of the population lives, about 1,500 people, many of them going into the old town to work. 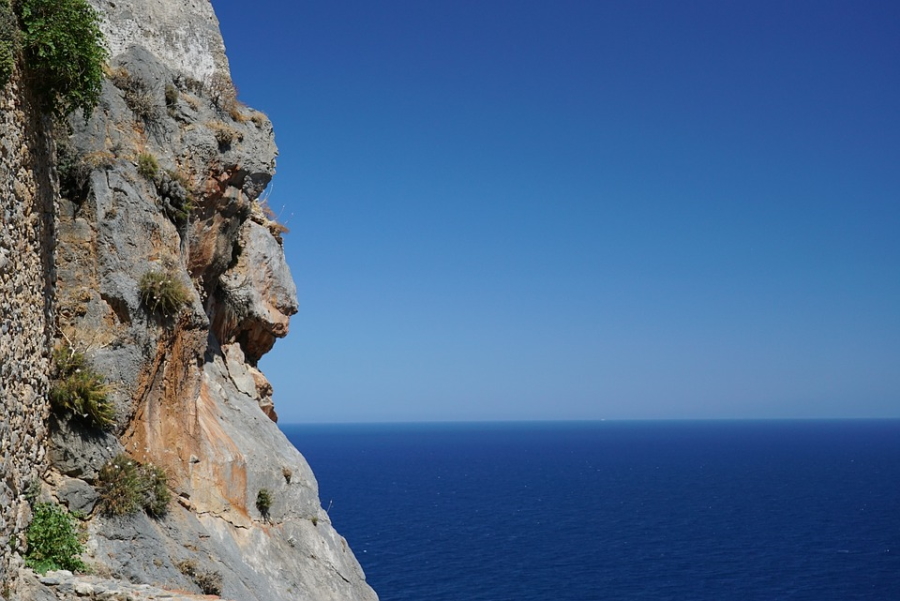 The rock of Monemvasia became an island when it was severed from the mainland by an earthquake in 375AD, and the first people moved in to live on the island when the first road was built in the 6th century. It became a vitally important port, controlling the passage of ships travelling around the southern Peloponnese between Italy and Constantinople (modern Istanbul). 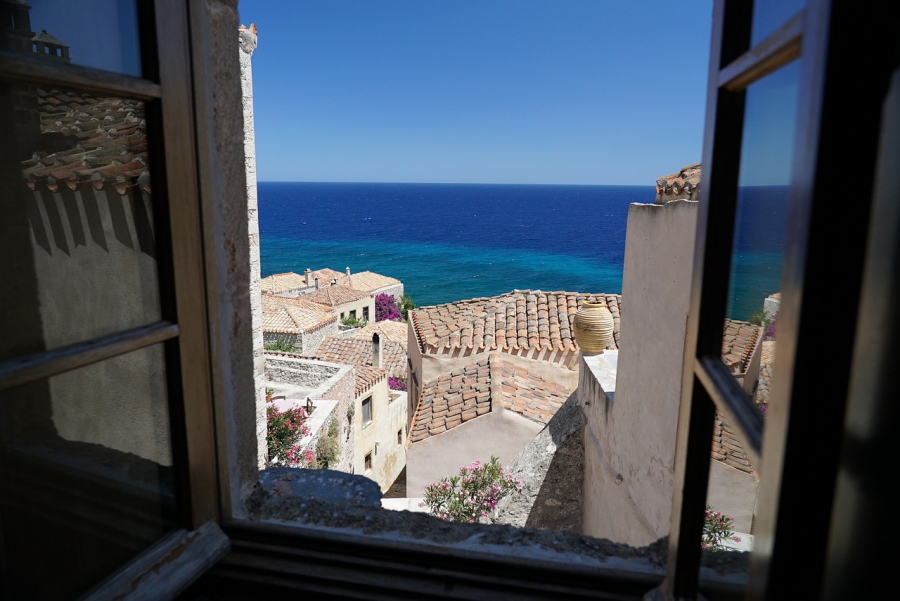 With its one entrance and sheer sides, the rock was virtually impregnable, and the only time it fell was in 1821 during the War of Independence when Turkish occupiers were trapped here and besieged by the Greeks. After five months the people inside were reduced to eating grass, rats, and even, it's reputed, each other before they surrendered.

Dining on the island today is, you'll be pleased to know, a little more sophisticated! Whether you visit by day or in the evening, allow time to wander through the streets - not just the main streets but the back streets too, where crumbling churches and houses create a picture of what life used to be like here, though it is still hard to imagine 50,000 people being crammed into this space. 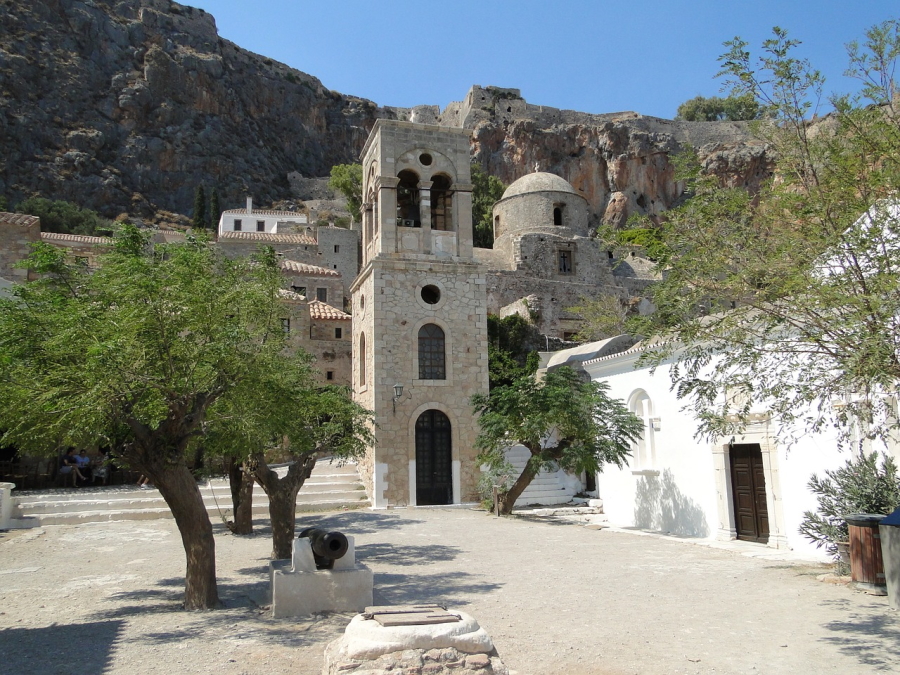 Immediately on your left as you go through the entrance gate is the house where the respected Greek poet Yiannis Ritsos (1909-1990) was born. At the far end of the village, look for the church of Panagia Chrysafitissa. Its original date is uncertain, but it was restored by the Venetians in the 18th century. Its bell hangs from an acacia tree. Close by is the larger church of Agios Nikolaos, built in 1703. All these are in what is known as the Lower Town. 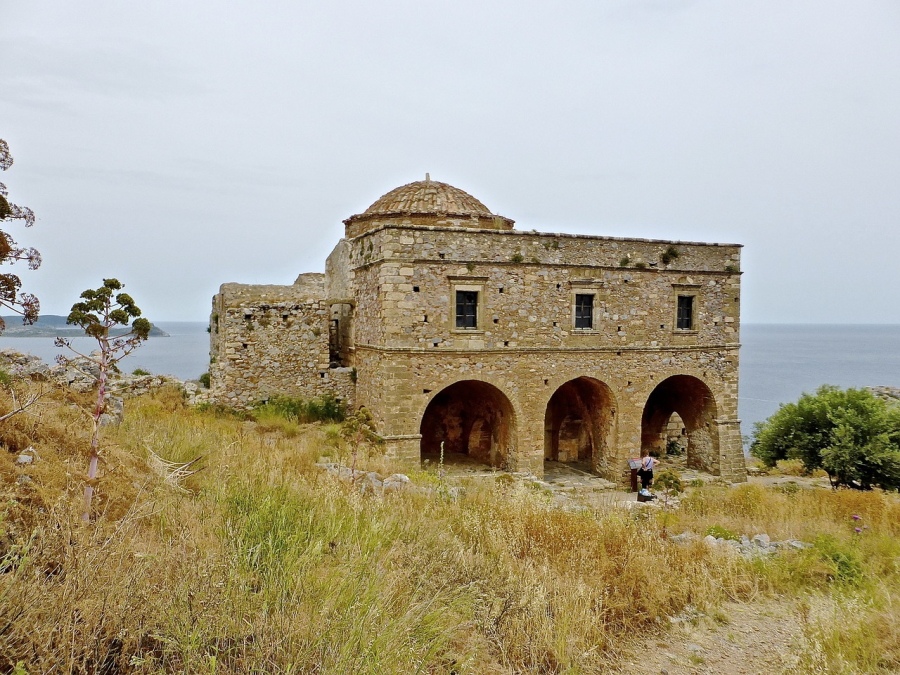 The approach to the Upper Town at the top of the rock is by a zigzag stone path which leads to another entrance, still with its original iron gates. All that remains of the Upper Town, however, is the 13th-century Byzantine church of Agia Sofia, standing alone at the very top of the site. Do try to make the effort to reach it, because the views along the coast from here are very impressive. 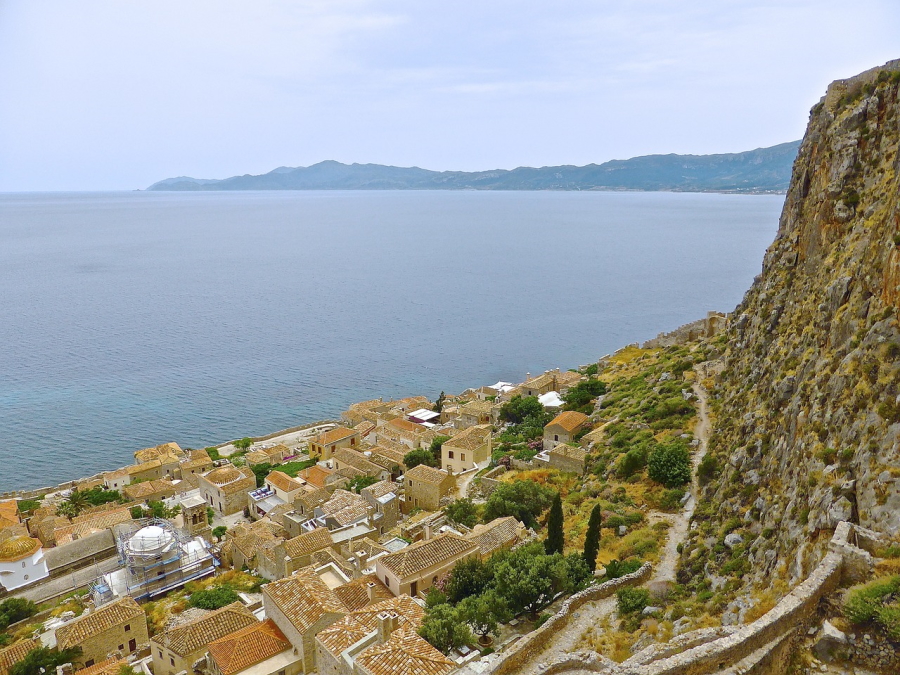 Don't miss our review of a wonderful book of photos of Monemvasia over the years. 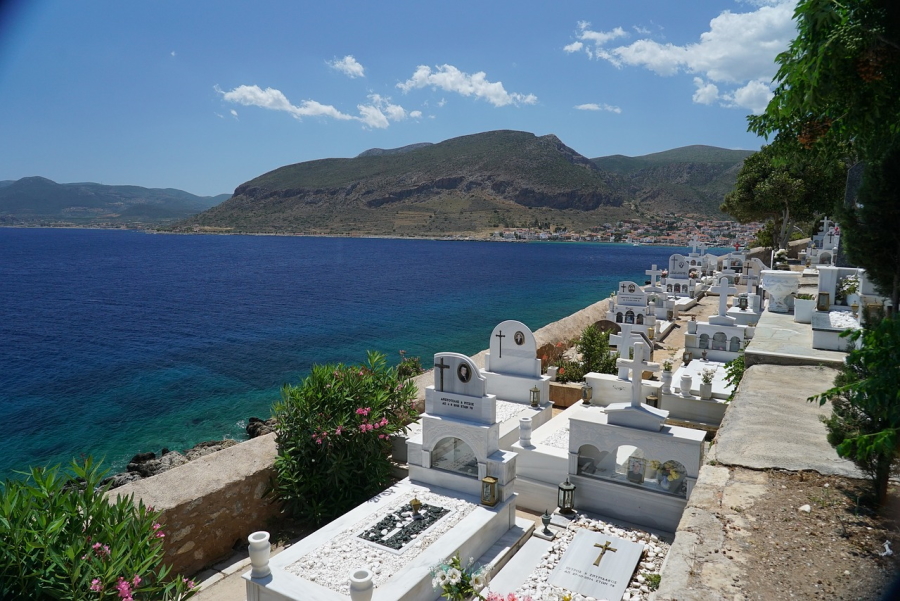 Where to Stay in Monemvasia

Some other Peloponnese pages