Mycenae in the Greek Peloponnese was a royal palace and is famous for the royal tombs, Lion Gate, and was excavated by archaeologist Heinrich Schliemann. 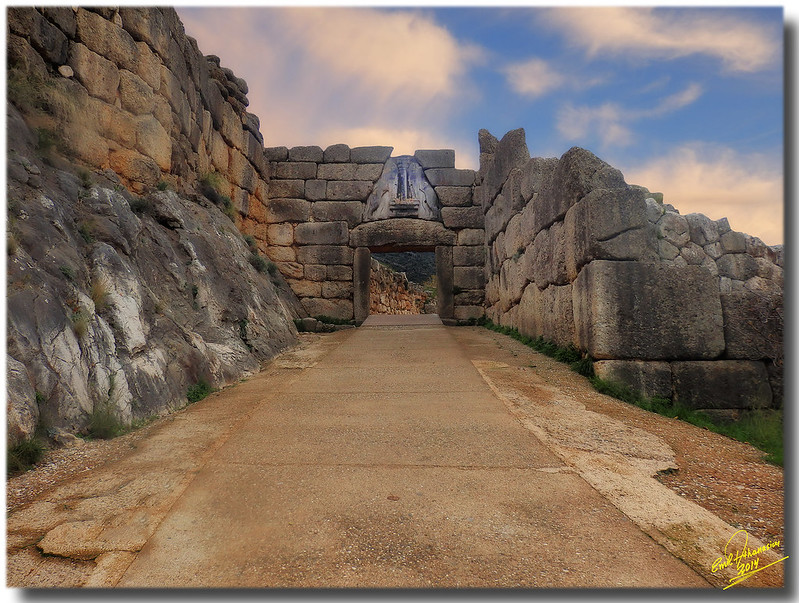 The Lion Gate at Mycenae

Without doubt, Mycenae (or Mykinai) is the most important historical site on the Peloponnese. The great palace of Mycenae was known as the House of Atreus after the ruler of that name. He was the son of Pelops, who gave his name to the Peloponnese (Peloponissos in Greek).

The ruined complex lies just over a mile (2km) outside the modern village of Mycenae, which straddles the main road between Athens and Nafplion, and the ancient site is clearly signposted.

The first thing you see as you approach, on your left, is the Treasury of Atreus. This beehive tomb is a really impressive structure, especially considering that it was built without a scrap of mortar. You then pass down a long corridor into the main tomb, where the acoustics are startling. Say something out loud to experience this for yourself. Take a look, too, at the hefty lintel over the entrance door, which is 26 feet (8m) long and weighs almost 120 tons. 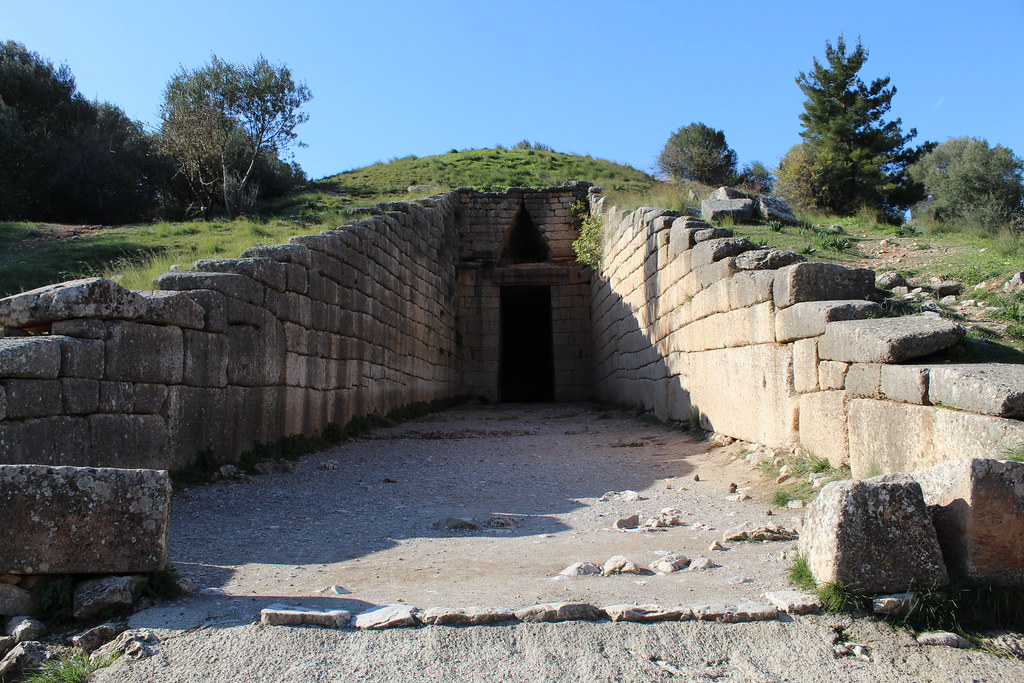 The Treasury of Atreus

The Curse on the House of Atreus

Greek dramatists tell the grisly story of the curse on the House of Atreus. Atreus's wife, Aerope, was seduced by his brother, Thyestes. In revenge, Atreus murdered two of Thyestes's sons, boiled them, and then served them to their father at a banquet. He then showed Thyestes the severed heads of his sons, to let him know what he had just eaten. From then on, Atreus and his descendants - who included Agamemnon, Menelaus, and Orestes - were cursed by the gods.

The Tomb of Agamemnon?

The first thing to strike visitors arriving at the main site is the famous Lion Gate, the carved lintel which straddles the entrance. Built in the 13th century BC, it is 12.5 feet (3.75m) wide at the base and almost 11 feet (3.5m) high. Note the grooves in the floor, which were made by chariots, and the holes for bolts at the side to keep the doorway firmly shut, when required.

When you pass through the gate, to your right are the circular remains of the royal tombs. In Grave Circle A, as it is known, six graves were discovered, containing a total of 19 bodies. This is where Schliemann found the spectacular golden burial mask which he believed was buried with King Agamemnon. In all, 30 pounds (14kg) of gold in the form of masks, jewelry, crowns, and other items were discovered here, and this treasure haul is one of the major attractions in the National Archaeological Museum in Athens.

The Rest of Mycenae 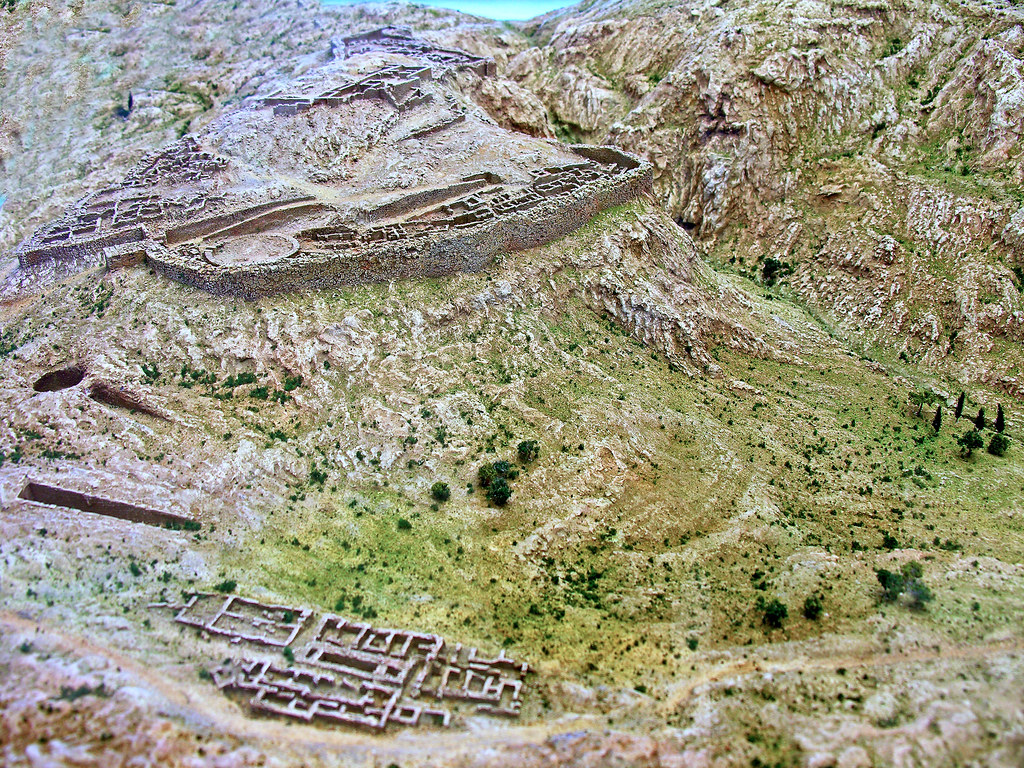 You need to use a certain amount of imagination, and have a map of the site, to make the most of a visit to the rest of Mycenae. There are plenty of foundations to see, and the picture which emerges is of a large royal palace, with huge walls, and an extensive community living just outside the walls and serving the royal court.

The walls themselves were up to 46 feet (14m) thick and were called the Cyclopean Walls, as people later could not understand how they had been built, if not by the one-eyed giants known as the Cyclops. 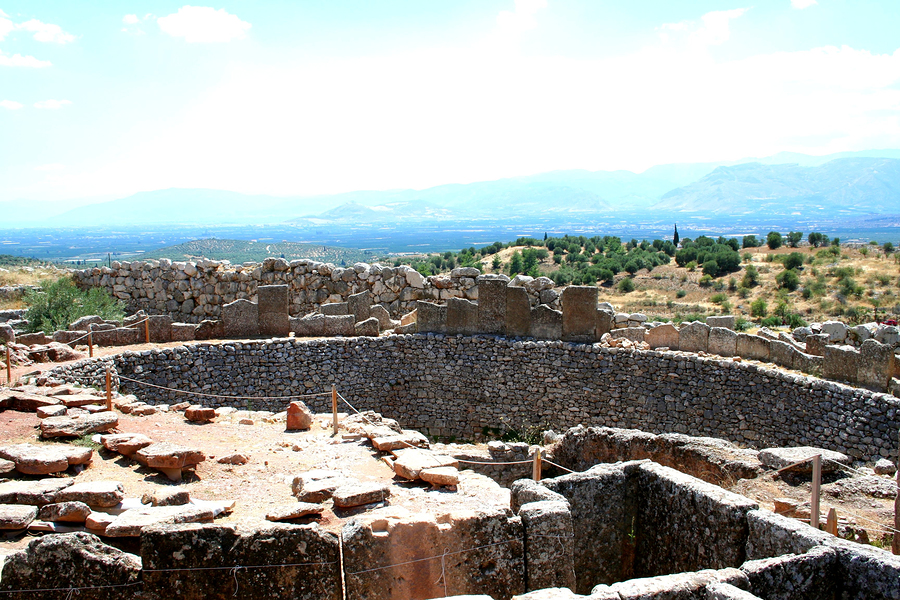 The royal palace was destroyed by fire in 1200 BC and the burn marks can still be seen on the foundations that remain. A century later, the site was abandoned and left to decay until its rediscovery by Heinrich Schliemann in 1874. As you wander around today, you can see the remnants of bedchambers, royal apartments, baths, a grand reception hall, and a throne room.

The huge, one-eyed Cyclopes are often maligned, especially due to Odysseus's encounter with the hungry Polyphemus in The Odyssey, but they do have a presence in classical mythology. They play a pivotal role in Homer's The Odyssey, and also appear in Hesiod's Theogony. In the latter, the Cyclopes, banished to Tartarus, are said to have fashioned Zeus's thunderbolts, Artemis's bow, and Poseidon's trident. They also made Perseus's helmet of darkness.

It's quite the resumé, but you have to ask how the idea of a race of one-eyed giants made it into the collective imagination. In 1914, palaeontologist Othenio Abel posited that the skulls of prehistoric elephants might have had something to do with it, as they appear to have only one eye socket, which is actually the nasal cavity. Whether there's any truth in that or not, the myth of the Cyclopes lives on.

There are several restaurants in modern Mycenae which cater to the lunchtime tourist trade, but the restaurant attached to the Belle Helene hotel is open all year round and every day for lunch and dinner. Check the visitor book, which bears such names as Debussy and Virginia Woolf. This is also the best of the limited accommodation options near Mycenae, and is where archaeologist Heinrich Schliemann stayed so you can't fault it for historical atmosphere, though it is quite basic. You can even stay in Schliemann's room, as this account in Perceptive Travel describes. Tel: 27510-76225 (restaurant) and 27510-76179 (hotel).

La Belle Helene is good if you want to make an early start at the archaeological site and beat the crowds, but you might also consider staying in Nafplion, which is a half-hour's drive away and has a much better selection of both hotels and restaurants.