The National Archaeological Museum is one of the best things to see in Athens, and the best museum in the world for seeing Greece's archaeological treasures. 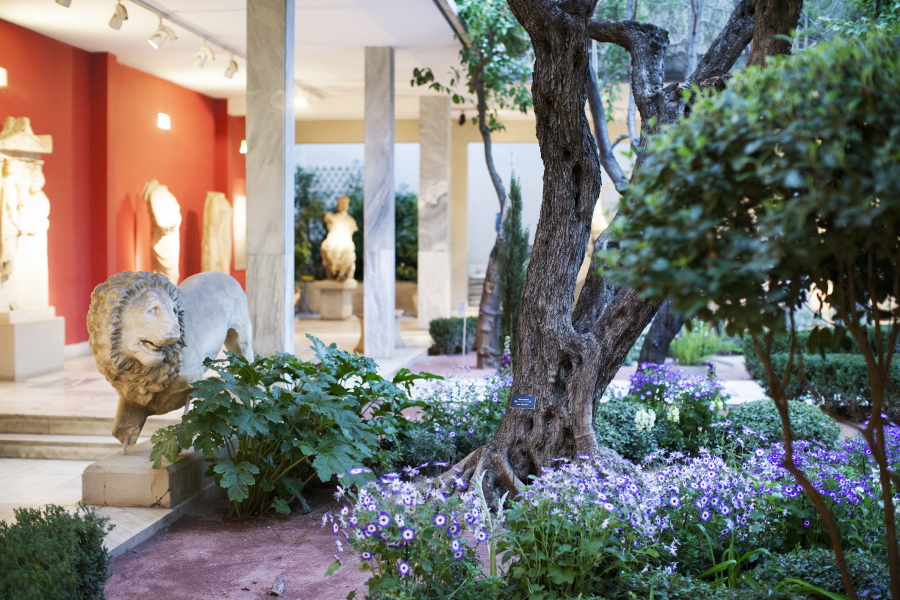 This collection of the best treasures from Greek civilisations down the centuries forms the core of one of the world's great museums. If you do only two things in Athens you should visit the Acropolis and also visit this remarkable collection of artifacts. 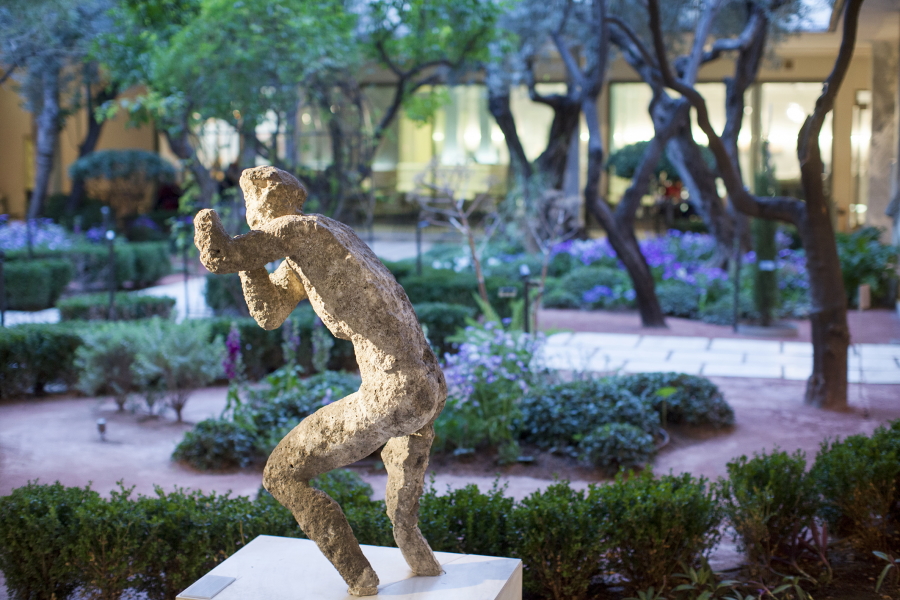 To see everything properly you would probably need to visit the museum twice, as there is too much to take in on one long visit when museum-fatigue might set in. If your time is limited then take a guided tour which will show you the unmissable highlights, and these tours are available in several languages. Ask in the ticket office. You should at the very least buy a museum guide, or take an audio tour, also available in different languages.

You will also do better if you have a map. The museum's website has one, in both Greek and English, and there's a link to a copy of it here. 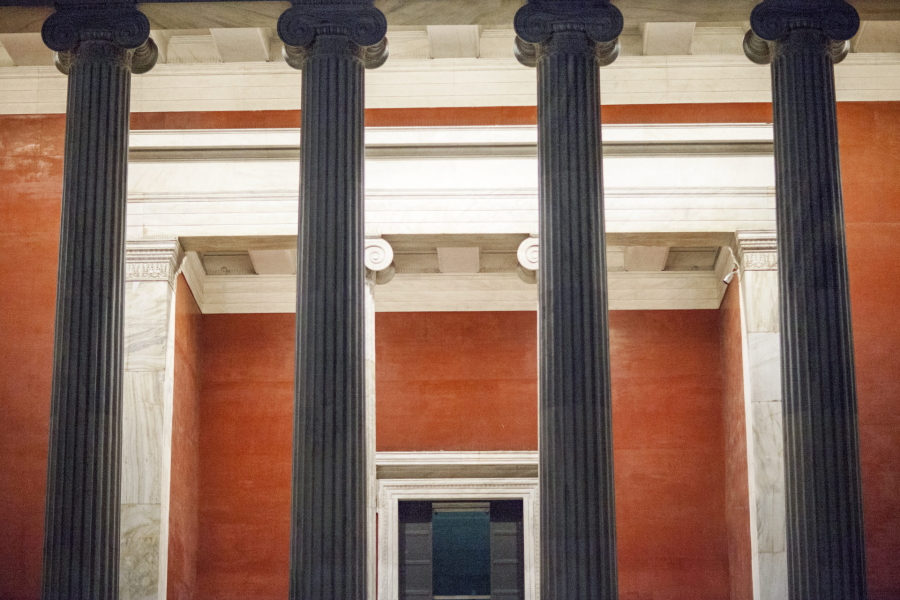 If you're visiting by yourself then head first for the Mycenean collection, one of the jewels in the crown whether you have plans to visit Mycenae or not. These treasures from the royal tombs at Mycenae date from 1500 BC. They include gleaming gold masks, cups, dishes, and jewellery discovered by archaeologist Heinrich Schliemann in 1874.

Some of the Mycenean Golden Treasures

Don't miss the exquisite golden burial mask which Schliemann believed (partly because he wanted to) to be the face of King Agamemnon. Later dating, however, showed that it predated King Agamemnon (if he even existed) and the Trojan Wars by 200-300 years. Other finds include a silver wine vase (a rhyton) in the form of a bull's head with horns of pure gold. 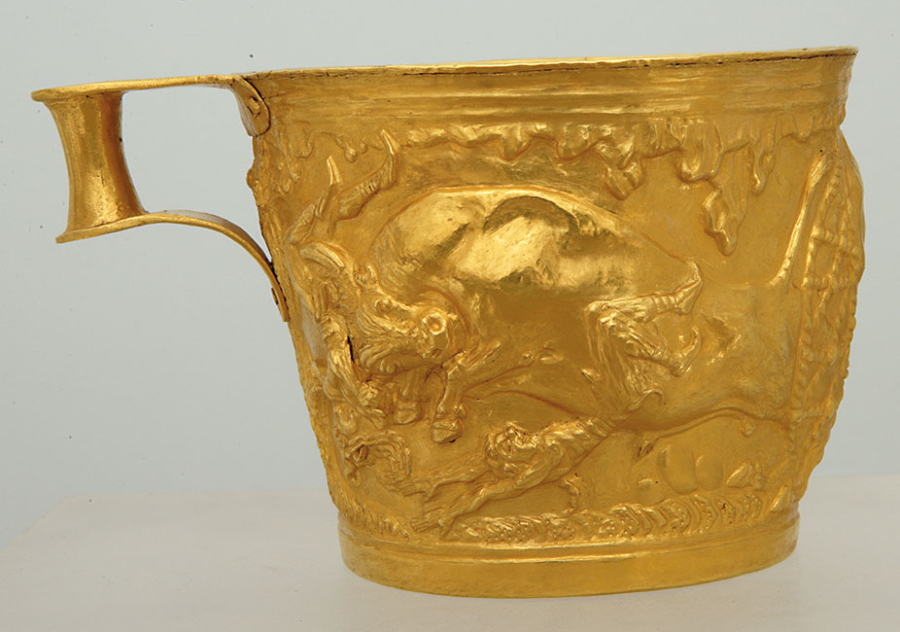 Up the stairs is a stunning collection of frescoes from the island of Santorini (Thira). These were immaculately preserved in the huge volcanic eruption that happened in the 16th century BC, and must not be missed. The beautiful colour and detail is breathtaking, bringing the world, the people and the artists alive before your eyes. There have been discussions about moving these back to Santorini for display there, but they look set to stay in Athens for the moment. 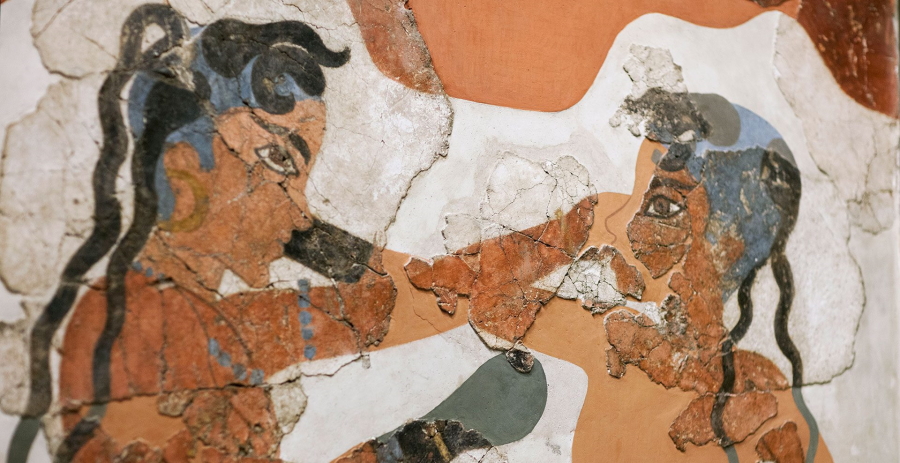 Fresco from Thira: The Boxers

You will also find a stunning collection of Cycladic figurines found, naturally, in the Cycladic Islands. Despite dating from about 2000 BC they are uncannily modern-looking. 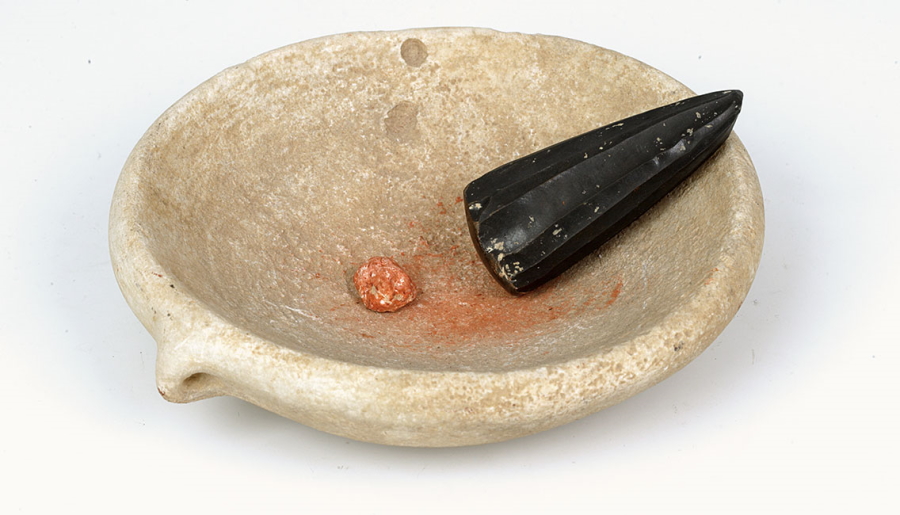 The museum's sculptures are equally impressive. Seek out the rudely exuberant statue depicting the gods Pan and Aphrodite, dating from the 1st century AD. He clearly has lascivious designs on the naked goddess, while she preserves her modesty with one hand and wields a shoe in defence in the other. Also lovely are the remnants of a colossal cult statue of Zeus, found in 1916, and some delicate plaques of dancing girls from the Theatre of Dionysos below the Acropolis.

Bronzes at the National Archaeological Museum

The bronzes, which include some of the museum's largest works, possess an overpowering majesty, none more so than the huge figure of the sea god Poseidon. Arm stretched back in muscular grace, he is about to throw a trident, though some believe the figure is actually Zeus preparing to throw a thunderbolt. Experts have been able to use his facial expression to date the statue to about 460-450 BC.

The more delicate 'Jockey Boy' is one of the museum's most famous bronzes. The powerful horse and its tiny rider may or may not have been intended as one work - it was found in pieces - but the result is dramatic and full of movement. The figures were discovered, like Poseidon, in the sea off Cape Artemision, off the coast near Evia, and date from the 2nd century BC.

Another brilliant piece is 'The Youth of Antikythira', a 6.5-feet (2m) high bronze statue of a nude young man that combines delicacy and power. Some believe it's the work of the famous sculptor and painter, Euphranor of Corinth. The youth once held a spherical object in his right hand, perhaps an apple, which would make him Paris, the son of King Priam and Queen Hecuba of Troy. The statue gets its name because it was found in the waters off the small island of Antikythira in 1900 and dates from the Hellenistic period (323-31 BC). 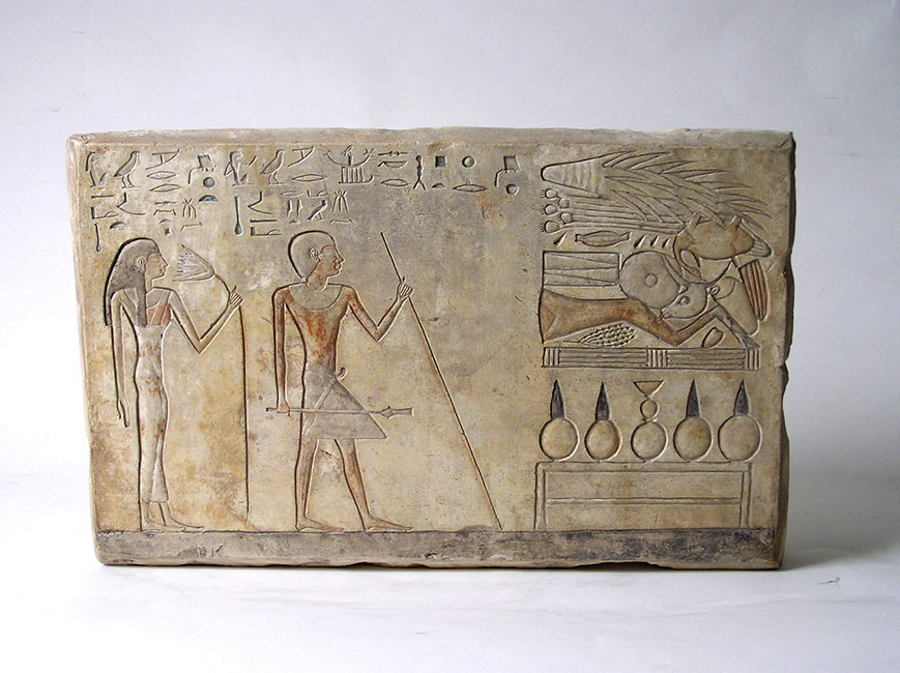 From the Egyptian Collection

The collection of Egyptian art reminds us of the way the ancient Greeks had close trading relationships with the Egyptians. Among the works to admire are an alabaster statue of a pharaoh dating from 2575-2155 BC, a granite statuette of Ramses II dating from 1290-1244 BC, and a stone stela from 664-525 BC with hieratic text, the ancient Egyptian writing system. 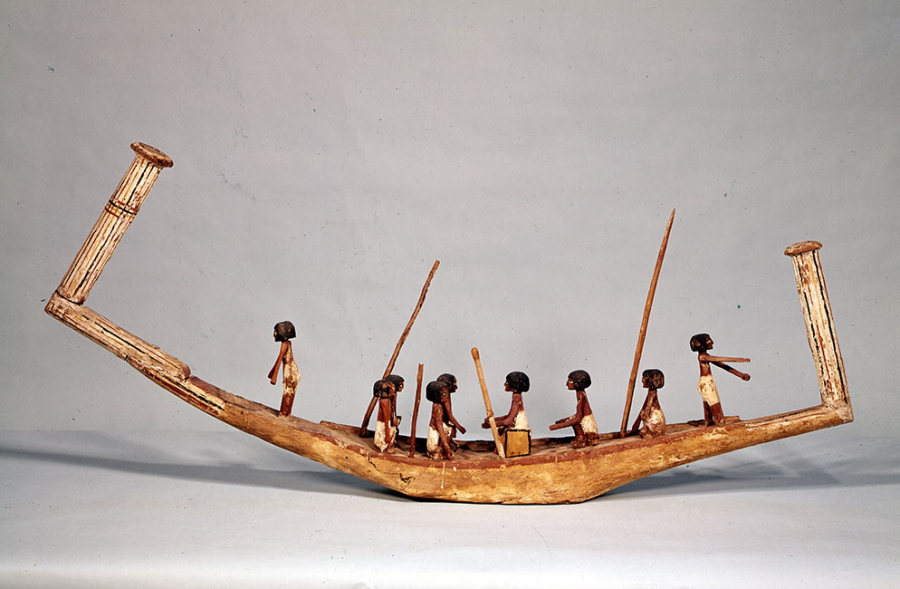 From the Egyptian Collection

The museum also boasts two private collections: the Eleni Stathatou Jewellery Collection and the Karpanos Collection. The latter includes many artifacts from the ancient site of Dodoni, near Ioannina in Epirus, including lead tablets containing questions for the oracle at Dodoni.

The jewellery collection includes beautiful works in turquoise, silver, bronze, and glass, ranging in time from the Bronze Age to the Byzantine era. 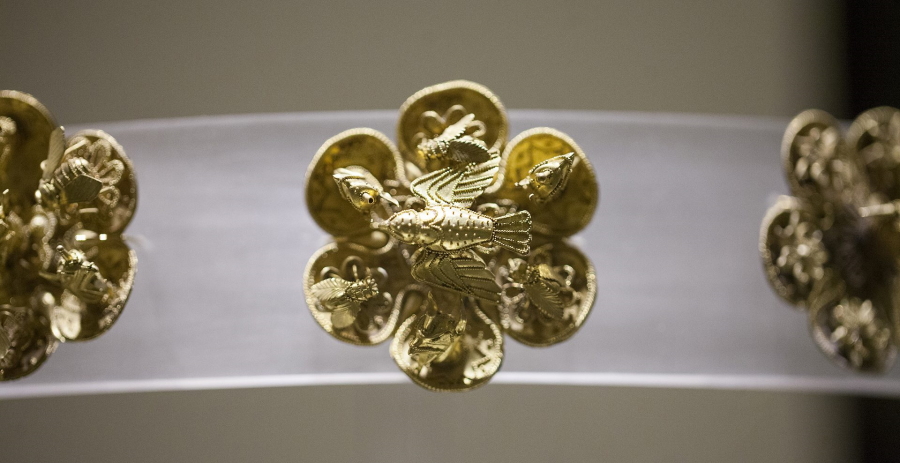 From the Jewellery Collection

Also worth checking out are the museum's temporary exhibits, as there have been some really impressive shows put on there over the years. 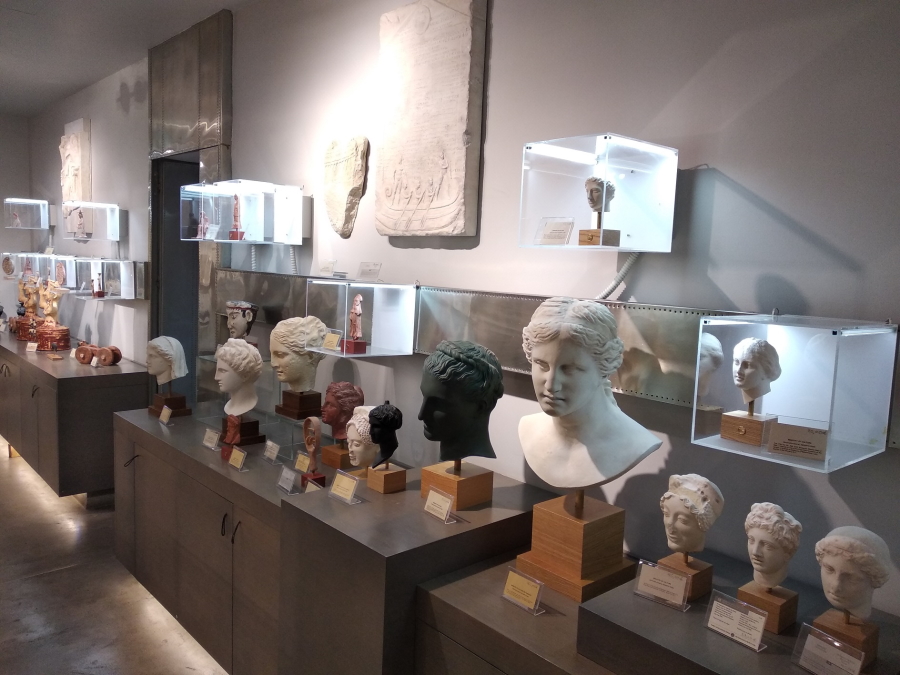 Don't Miss the Museum Shop in the Basement

Coin enthusiasts will definitely want to see the Numismatic Museum, which has one of the greatest collections of coins in the world. It contains over 600,000 items and coins range from the ancient Greeks through the Roman and Byzantine period right through to the present day.

It's also interesting for the building in which it is housed, the 1878 mansion which was once the home of archaeologist Heinrich Schliemann and known as the House of Troy. It's a 20-minute walk from the National Archaeological Museum, a few minutes from Syntagma Square, but it is part of the main museum collection. 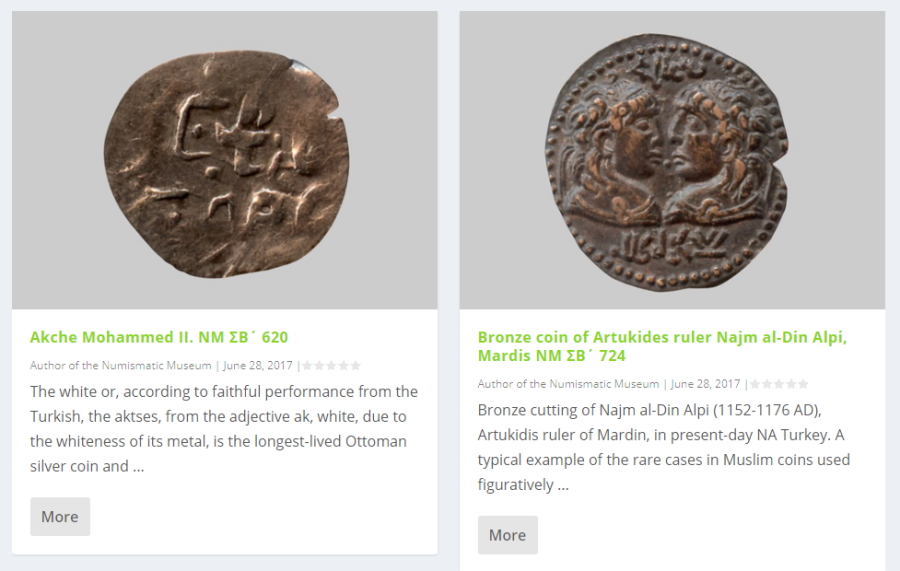 There are 3-D Coin Displays on the Numismatic Museum's Website

The old Greek currency, the drachma, had been in existence since at least 1100 BC before it was replaced by the euro in January 2002. It wasn't a universally popular move, partly because of the drachma's longevity and partly because there were price rises caused by 'rounding up' amounts due to the new exchange rates.

The drachma lived on, though, on the new 1 euro coins which cleverly depict on one side an old 4 drachmae coin from the 5th century BC. The 2 euro coin also has an ingenious design from Greek mythology showing Zeus as a bull abducting Europa, after whom Europe and ultimately the euro were named. Other coins depict Greek ships, from old triremes to a modern tanker, and famous Greek politicians including Venizelos and Kapodistrias.

See this guide to 20 of the Best Museums in Athens.