The ancient theatre at Epidavros is one of Greece's greatest attractions, ranking alongside the Acropolis and the Palace at Knossos in Crete, and it is easily the finest theatre in Greece.

To see Epidavros (or Epidaurus) empty is impressive enough, and if you are lucky enough to attend one of the summer performances here, the effect is truly magical. The theatre is used to put on performances during the Athens and Epidavros Festival every summer. See our Athens Events page for further information.

Because much of Epidavros appears overgrown, many visitors do not take the trouble to explore it, leaving after a look at its most famous feature, the theatre. Look for the signs that direct you to the various remains, and if you can arm yourself with a map, and go first to the museum and not straight to the theatre, you'll have a much more rewarding visit. 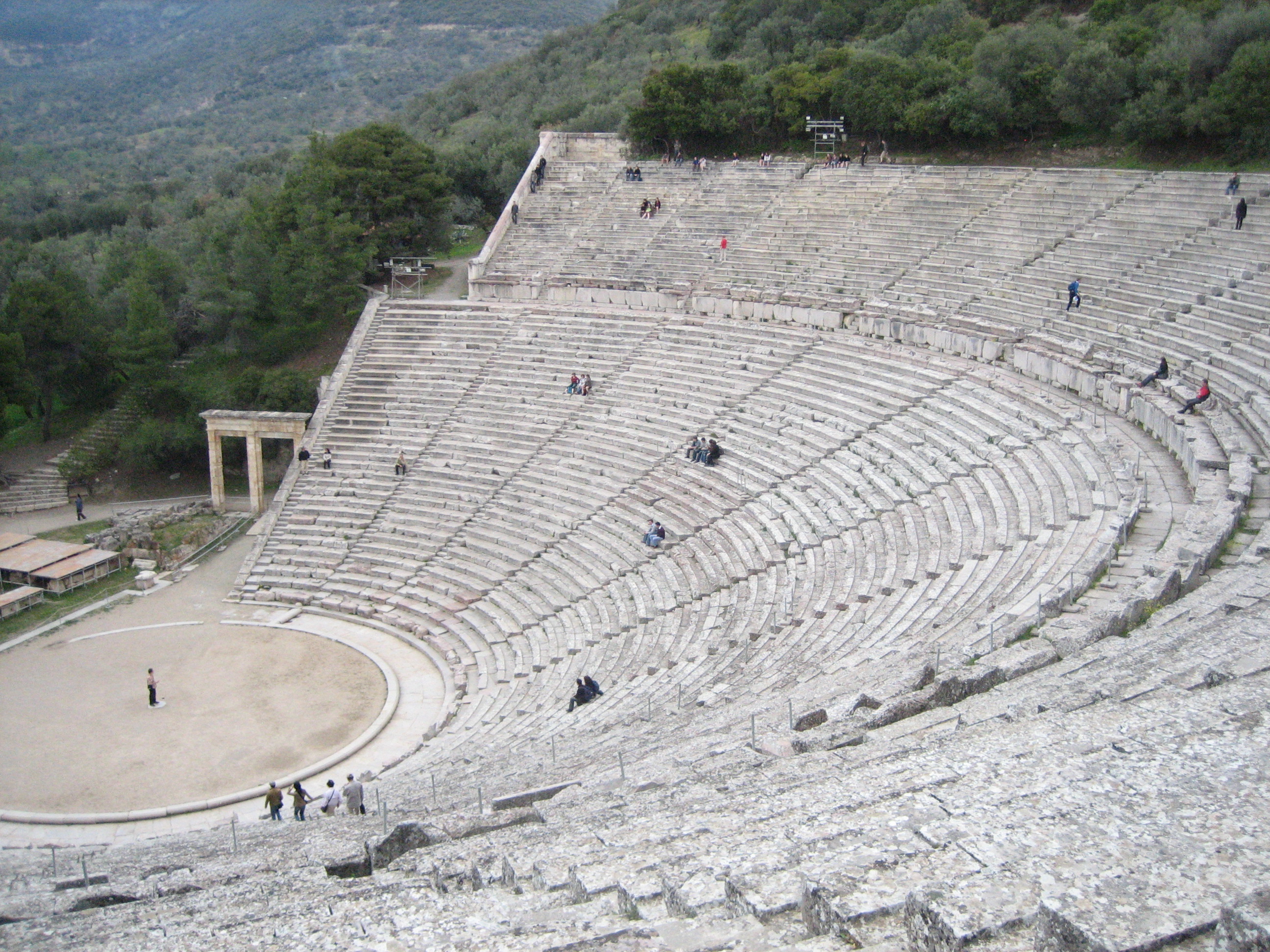 The theatre was built in the 4th century BC, and has 55 rows of seats, capable of holding 14,000 people. The stage is 65 feet (20m) in diameter. It's hard to believe that such a huge structure lay buried and undiscovered until excavations began in the late 19th century.

It was finally restored in 1954 and it's worth noting that the first 34 rows of the auditorium are all original. Imagine these very same seats being used by people living almost 2,500 years ago. The audience, especially those higher up, look out across the stage and the site of Epidavros to the mountains beyond. It's a spectacular setting. 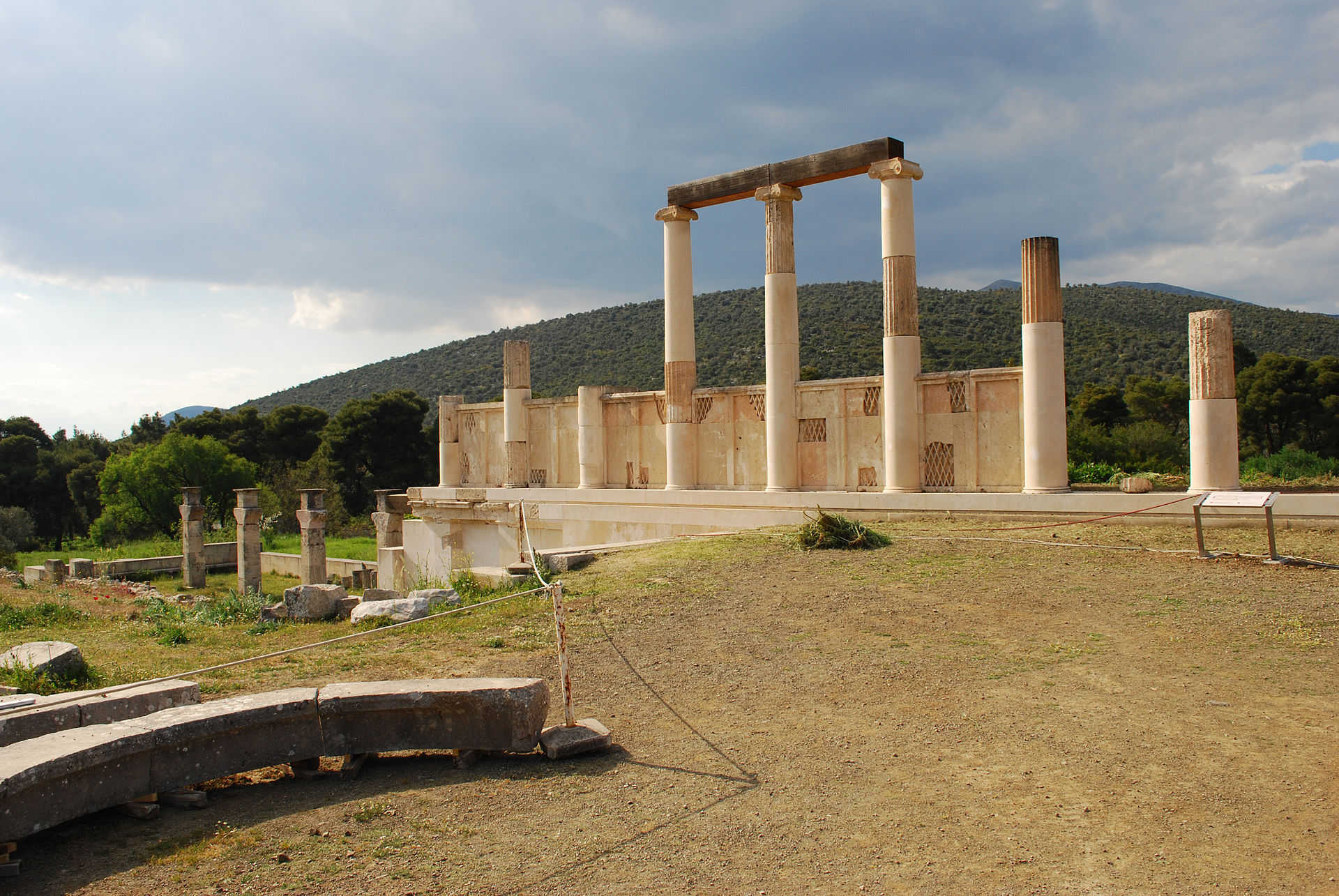 The God of Healing

There is much more to Epidavros than the theatre, which wasn't built purely for aesthetic reasons or to show drama. The site was dedicated to the God of Healing, Asklepios, the son of Apollo. He learned his healing skills from the centaur, Charon, and he was so gifted at healing that he is said to have had the power to bring people back from the dead. However, he was himself killed by a thunderbolt from Zeus, the King of the Gods, who feared that Asklepios was becoming too powerful.

There was a temple dedicated to Asklepios at Epidavros and it contained a statue of the God made from gold and ivory. Little of the temple is visible today but there are ongoing excavations here and Epidavros may be revealed as an even more important site than we already know it to be. 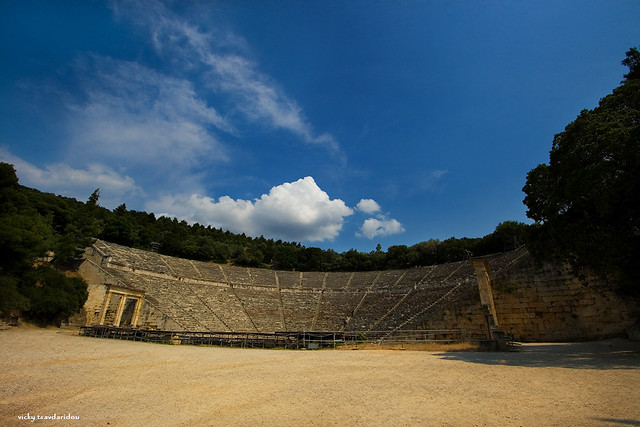 People brought their health problems to Epidavros, where medical practitioners were based, and the museum on the site contains examples of the kinds of medical instruments used. Drama played a part as a kind of catharsis or purging in some of the healing processes recommended in those days.

The museum also contains records of cures alleged to have taken place here, as well as more conventional vases and statuary recovered during the excavation work.

Around the Site of Epidavros

Spread around the site of Epidavros are also the remains of the guesthouses where visitors stayed, a bath-house, and a gymnasium, showing that physical exercise was as important in some cures back then as it is today. The Greeks were firm believers in having a healthy mind in a healthy body. This small nation gave the word not only the greatest philosophers and dramatists but also the Olympic Games and the father of medicine, Hippocrates, who was from the island of Kos. 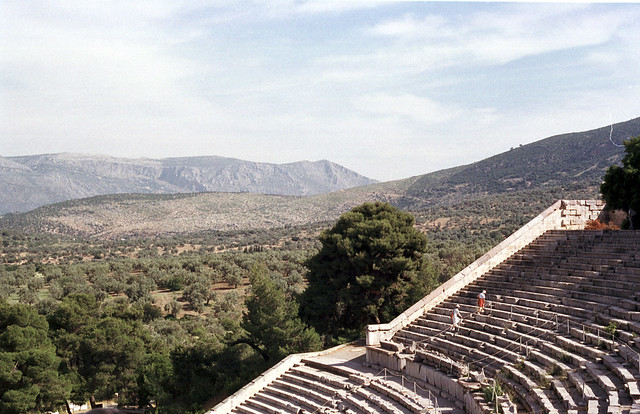 Another important building is the circular tholos, which was designed by the same architect who built the theatre, Polykleitos. Its purpose isn't known for sure, though it might have been home to the sacred serpents which were used in some rites, or it may have been where the rites were carried out.

One theory is that it might have worked as a shock therapy for people who had mental illness. Patients were made to crawl through the concentric passages inside until they reached the central area and were in pitch blackness surrounded by snakes. It sounds guaranteed to produce a shock, if not a cure. It also sounds like a scene from Indiana Jones. 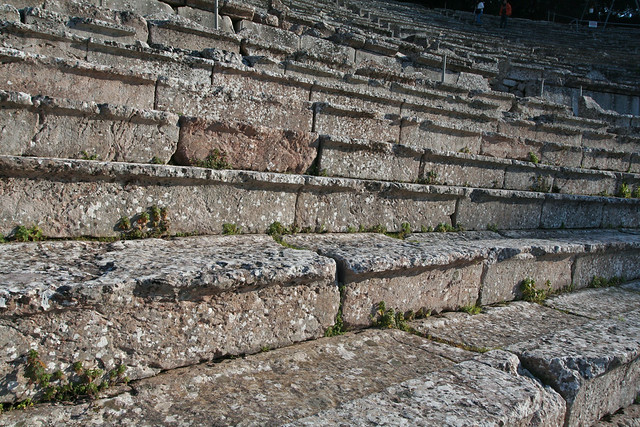 Near the tholos and about 400 yards (365m) northwest of the theatre are the remains of the 5th-century BC stadium. Some of the seating and the starting and finishing lines for races can still be seen. It would have been used during the major festival in honour of Asklepios, which was held every four years.

There are some cheap hotels within a few minutes of the site's entrance, if you need to stay close by for an early start. They're perfectly adequate but nothing special. A better option is to stay in charming Nafplion, which is a 30-minute drive away, or to stay on the coast in the little town of Palaia Epidavros, which is a 15-minute drive away and has plenty of accommodation options.