The Corfu Trail runs from the southernmost point of Corfu at Cape Asprokavos and winds for 220km (137 miles) to the northernmost point near Andinioti Lagoon. 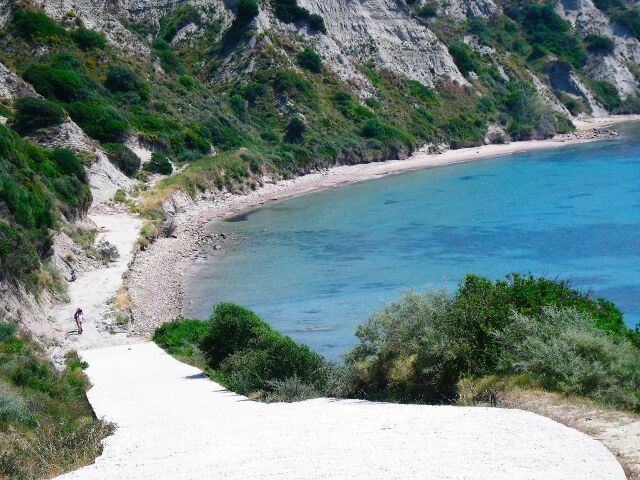 When Hilary Whitton Paipeti first came to Corfu as a holiday rep at the start of the 1980s, she had no intention of staying, but she fell in love with the island. More than that, though, she has contributed something to island life of which she can be forever proud, for Hilary is the woman who created the island's only long-distance footpath: the Corfu Trail.

'I worked as a rep for two years,' she says, 'and by then I was totally in love with Corfu. I went into journalism and publishing, and have been publishing The Corfiot Magazine for 15 years now. It's aimed at the local community and is published monthly all year round, but in summer it does carry information on what's going on for the benefit of the visitors.

I also publish regional magazines that people will find in the different resorts around the island. More recently I've also been doing real estate and real estate development.'

Creation of the Corfu Trail

One of the reasons behind Hilary's venture into the property market is tied in with the Corfu Trail. Part of its original aim was to link the villages of the island, and bring some life back into those whose population was dwindling as young people moved down to the coast to work in the holiday business, or moved away to Athens and beyond.

'Some of the villages inland were being left to disintegrate,' Hilary says, 'and yet they have some beautiful Venetian architecture. I wanted walkers to stop and at least have a coffee in the local kefeneon, but preferably be able to stay overnight. The problem is that in some villages there is no accommodation, so walkers have to leave the Trail for their overnight stay, and return the next morning. Now I'm actively working to encourage people to buy properties in these villages, with the express purpose of opening them as small guesthouses.'

Hilary's energy is beyond doubt, yet she has to credit her father with the idea for the Corfu Trail. Hilary was already leading walks on the island (another of her many different hats), and had written The Corfu Book of Walks, when her father suggested she put together a long-distance path, the Corfu equivalent of the Pennine Way.

'It was a great idea,' Hilary says, 'but nothing happened for a while. Then on one of my walks I met a German guy, Fried Aumann, who said he thought he might be able to get help with EU funding, and put up the rest of the money himself, so he is the one who people must thank for bringing the Trail into existence.' 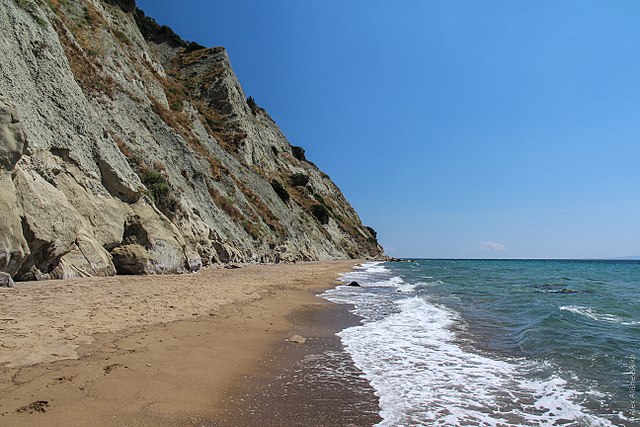 Hilary met Fried in 1999, and by May 2001 she was leading the first group of walkers to tackle the trail. The route runs from the southernmost point of Corfu at Cape Asprokavos and winds for about 220km (137 miles) to emerge at the northernmost point near the Andinioti Lagoon.

Corfu Trail from South to North

'I recommend doing it from south to north,' Hilary advises, 'for several reasons. It's flatter in the south so that gives people time to build up a bit of stamina. Also the best scenery is in the north so it builds up to that, as well. And it also means that the sun is on your back and not in your face for most of the way. The whole trip should take about 10 days, doing 4-6 hours walking a day without pushing yourself.'

Anyone can arrange to do the trail for themselves, and Hilary has written a guide to it, but it does take some planning. Instead you can book it all through Aperghi Travel in Corfu Town, who will not only book the accommodation but arrange for your luggage to be transferred each day and give you a copy of Hilary's book as well. And if you meet her on the trail, no doubt she would be delighted to sign it for you.

Video of the Corfu Trail

• The best times of year are May-June and September-October.

• Even in August, don't assume it will be fine weather. Corfu is very changeable. Always take wet weather gear.

• You should take a sun hat with you, and lots of water.

• Take a mobile phone with you, but also a number to ring. There's no point in having a phone if you don't know where to ring for help.

• In summer you could do most of the walk in walking sandals, except for the mountainous bits at the end when you should wear good boots with ankle support.

• Carry a stick, too. Be aware of snakes. They are not a major problem but they are there so check the ground in front of you if it's overgrown and you can't see where you're treading.

More Information on the Corfu Trail