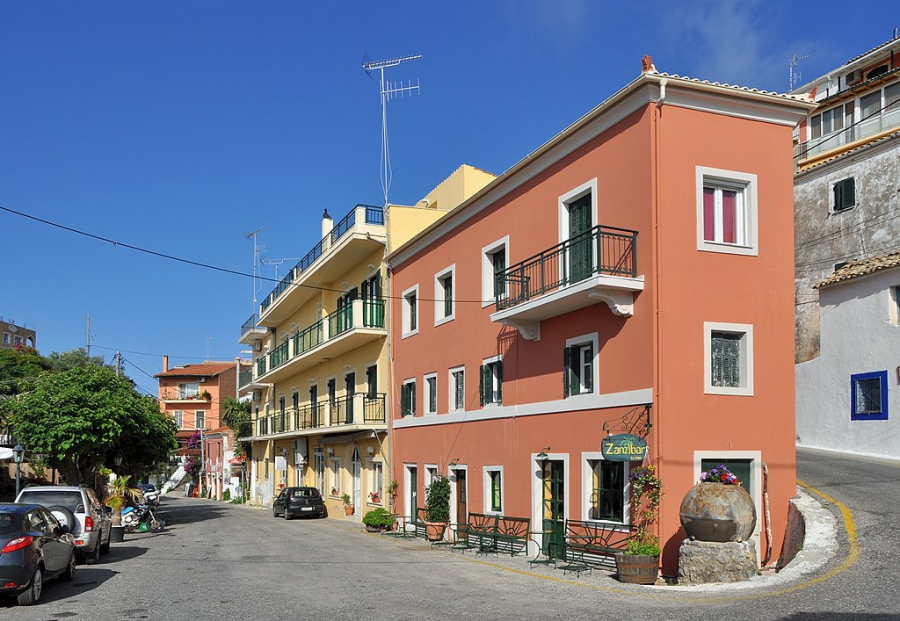 There is not shortage of Sunset Tavernas in Corfu but the one here at Perouládes probably has the best claim as the sunsets in this northwest corner of the island are beautiful. Don't just go at sunset, though, as the small beach here is wonderfully scenic, stretched out below the high cliffs of Cape Drástis which plunge straight down to the sand below.

In the village of Perouládes there are some lovely photogenic houses painted in pastel shades and with colourful shutters and pots of flowers outside. The village also has a few tavernas, but most people head for either the Sunset Taverna or the equally aptly named Panorama, right above the cliffs.

The wide sandy beach at Ágios Stéfanos is the great attraction, as curves around the bay and to the north are the dramatic cliffs of Perouládes. It's a lovely spot and it's not surprising that this busy little resort has grown up here. It has proved very popular with families because of the beach, and the watersports facilities available there. 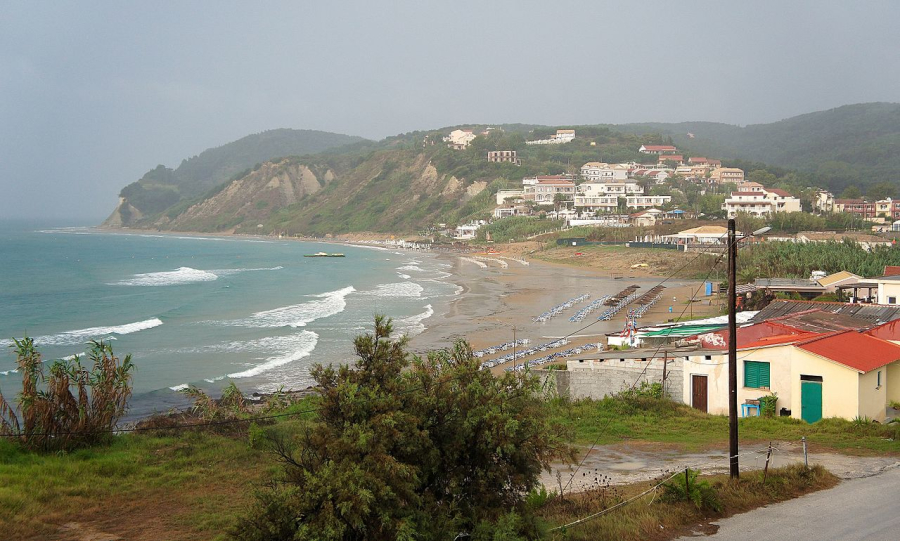 While there is plenty to do in the evenings, it isn't as raucous and rowdy as some resorts have become, and there's a good selection of restaurants and shops, as well as activities such as horse-riding and scuba-diving, and trips to the offshore islands, which can all easily be arranged from here.

Although Aríllas is fairly small and tucked away in the far north-west of the island, it is justifiably popular with holidaymakers, especially families. The beach is mostly sandy with plenty to do, and it is particularly popular with windsurfers because of the offshore winds coming in from the open sea. High headlands at either end of the beach add to the attraction.

There are also some walks in the area and you can find more details about what to do in Arillas on their local website: https://arillas.com.

To arrive at the pretty little hill village of Afiónas, where cobbled streets wind through whitewashed houses, is like entering a secret world. It stands on top of a headland to the south of Aríllas, a beautiful spot, and if you walk through the village you can reach the headland and get terrific views across the bay.

Park as you arrive at the village because you will need to turn round and leave the same way: this is the end of the road. There's a church, a café, a restaurant, a wonderful olive shop, and lots of lovely well-maintained houses which are a photographer's delight.

This Ágios Géorgios in the northwest of the island is similar in many ways to the town of the same name in the southwest. It has a great, long curve of sandy beach, which has naturally brought tourist development but this hasn't yet spoiled the place and it still has a definite character to it. It attracts both families, drawn by the beach and the safe bathing for children, and young windsurfers, drawn by the strong winds that often blow up here.

There are plenty of other beach activities on offer, such as boat hire and water- and jet-skiing, and boat trips to other places too, if you want a change of scene.

Many people are put off by Makrádes as the village has turned into a sometimes aggressive selling place for local crafts, such as embroidery, carpets and ceramics, and food and wine too. It attracts coach parties by the score and therefore often seems very busy and not too appealing. However, if you can get beyond this first impression and take a walk round the village streets, it’s a beautiful hill community.

The cobbled streets climb up between the white houses, they turn corners and twist up again, and it would be very easy to get lost despite it being quite a small place. A good time to visit if you’re not interested in buying but just want to see the village is during the afternoon siesta, when all but the more determined traders retreat behind their shutters and you can have the place almost to yourself.

The village itself is relatively untouched by tourism, as the busy main coastal road means people tend to rush through, especially as it is rather difficult to stop and park. All the more reason to try, then, and find a friendly hill community and wonderful views, especially if you walk north along the road towards the aptly-named Bella Vista restaurant, and the nearby Golden Fox hotel/restaurant.

For many visitors Corfu is defined by its beach resorts, but more adventurous travellers will discover another Corfu entirely in its delightful mountain villages, of which Doukádes is one of the best. It’s not necessarily the prettiest, but it does have great character and an impressive setting surrounded by hills and farmland. Roads swirl around it and they are not always marked at junctions, so getting to the centre can be a challenge, but a fun one. 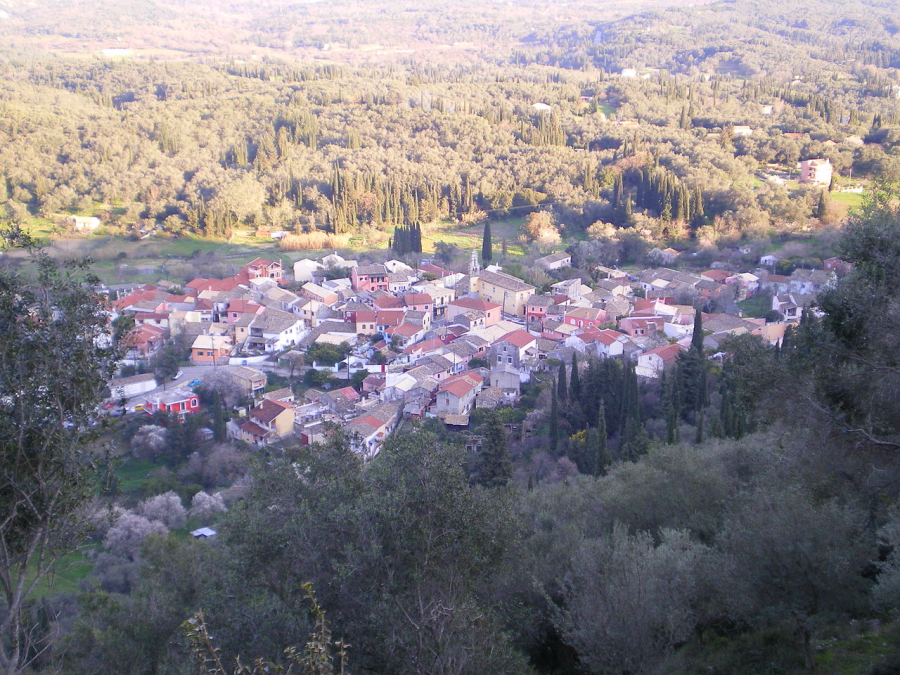 Doukades
Photo by Doukas at the Greek language Wikipedia

Once there, don't miss the Church of the Blessed Virgin Mesochoritissa in the tiny central square, and ask at one of the tavernas such as Elizabeth's for directions to the Chapel of St Simeon, which makes a good walk from here.

The flat and fertile Ropa Plain in the centre of Corfu is an especially peaceful retreat from the bustle along the coast. There's not a lot to do other than admire the scenery, which includes vines, corn fields, grazing cows and olive groves in the plains basin which is surrounded by hills. The best way is of course to stop and get out into it, whether by playing golf, riding a horse, walking or cycling (a popular activity due to the flatness and comparative lack of traffic).

Érmones is a tiny bay which gets very busy as the road down to it has lots of hotels and apartments to rent. One entire hillside down at the beach itself is filled with the rooms of a hotel complex which rise steeply up, so much so that a cable car takes guests up and down the several levels.

The beach is beautiful but shingle not sand, with headlands either end giving a cosy, cut-off feeling, and the Ropa River runs out to the sea here, halfway round the bay.

Vátos is another of Corfu's little inland villages which retains its charm despite being only a 5-minute drive from the popular resort of Érmones. Most visitors drive by the lower part of the village, stopping there if anywhere, but if you venture uphill you will see the old village with is charming houses, unhurried atmosphere, its solitary shop which doubles up as a café and the 13th century village church, dedicated to Ágios Nikoláos. It is its very ordinariness which is Vátos's main appeal.

Myrtiótissa will forever be known as the beach which Lawrence Durrell described as perhaps the loveliest in the world. There may be a bit of poetic licence there but it is certainly stunningly beautiful, its strip of sand running along a bay that's backed by high cliffs, and with a few rocky outcrops jutting up out of the usually deep-blue water.

It’s now a lot easier to get to than it once was, the former track having been widened to take cars, so don't expect idyllic privacy. It’s still not overwhelmed by visitors, though, as is evident by the fact that the southern end is favoured by nudists, and in summer one small snack bar is set up to provide basic food and drink. There is also a tiny and picturesque monastery here, though at the far end from the nudists!

It’s a steep zig-zag road down to the beach at Glyfáda, not an easy drive for nervous motorists but nothing stops people getting down to what is undoubtedly one of the best beaches on the island. It’s very wide and beautifully sandy and seems to stretch for miles in either direction.

So do the sunbathers, sometimes, especially at weekends and Greek holidays, when the locals head down here to relax for the day at the beachfront tavernas and bars. If you want to stay longer there are hotels, apartments, and a big resort complex, and the bars get very boisterous on summer nights.

The hill village of Pélekas is best-known as the site of the Kaiser's Throne, a look-out point much favoured by Kaiser Wilhelm II who would drive here from his home at the Achilleion Palace to enjoy the breathtaking views. You can see around the island for miles in every direction, and it is especially popular at sunset despite it being quite a steep climb up.

The village itself is no longer quite the unspoilt hilltop village it once was, as it’s very close to several west coast resorts and bays and is popular with people who want to enjoy the beaches during the day but retreat to somewhere with a bit more character at night. It has a slowly increasing number of tavernas and places to stay, but it has a long way to go before it is taken over by tourism completely.