Kassiopi is a popular tourist resort on the northeast coast of Corfu with a sandy beach, Byzantine fortress, old church, and lots of places to stay and to eat. 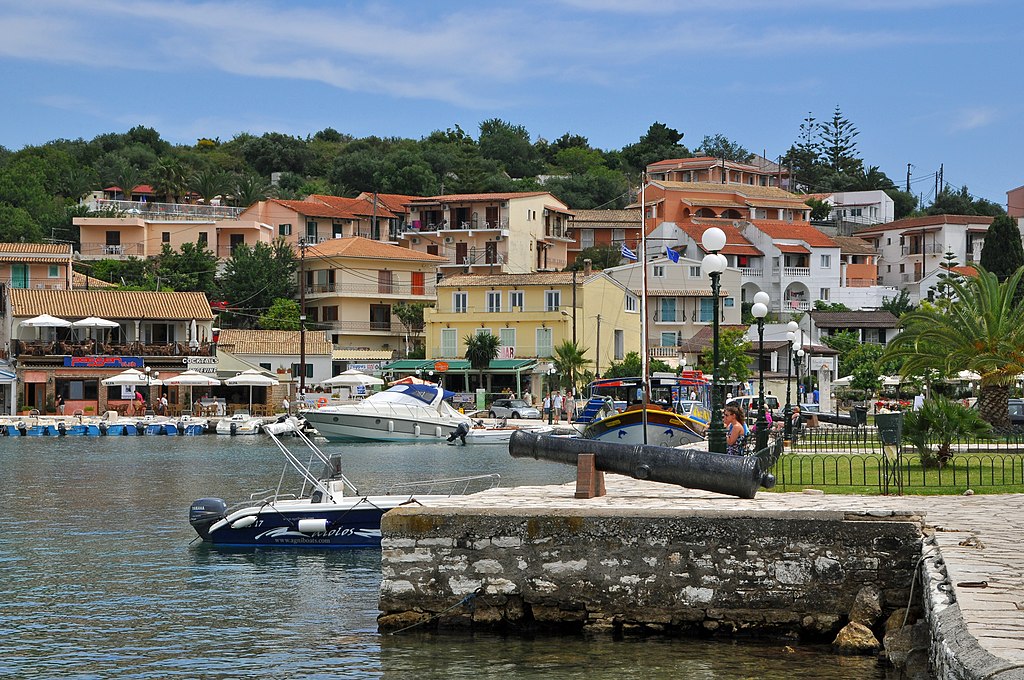 The former fishing village of Kassiópi seems at first glance to have been entirely taken over by modern tourist development, but a look beneath the surface shows a place of great history, a beautiful harbour, a fascinating old church and a community as vibrant and as busy as ever it was. Today, though, the local industry is catering to the town's many visitors.

People come from all over Europe to holiday here, and especially from Italy and Britain. The bars and restaurants line the main streets, offering food and films, karaoke nights, and English breakfasts. Yet at the same time the old ladies will be crossing themselves as they pass the main church, and the old men sitting as old men have always done, in the old-fashioned kafenion right on the main square.

Traffic can be bad along the narrow streets of the town's miniature one-way system (one way in and one way out!) and it is much easier to park on the wide main coast road, when you see the turn-off for Kassiópi.

It’s little wonder that people started to come to Kassiópi, as it has a very appealing setting between two low, green headlands, with the slopes of Mount Pantokrátor inland and across the sea Albania seems almost close enough to touch.

The harbour is fairly large and still has fishing boats bobbing there, to show that the old trades of the town continue.

In the centre of town just before you reach the harbour on the main road, the church of the Panagía Kassiópitra stands on the right. A shady, leaf-covered arbor and stone steps lined with flower pots lead down to the church entrance and courtyard, past a walled garden.

Stone arcades alongside the church form a little courtyard, with a wooden roof where numerous swallows nest in the spring. There are little niches for candles in the stone wall, and religious paintings above. It is a serene and peaceful place here.

The church of the Kassiópitra, which preserves the town's traditions in among the modern developments.

Feast of the Assumption

On August 15th the church and town really come alive, right in the middle of the busiest holiday period, to celebrate the Assumption of the Virgin Mary into heaven, a national holiday in Greece. Kassiopi has some of the biggest celebrations on the island, and lucky is the visitor who is here on that day.

Opposite the church is the path that leads up to the Byzantine Fortress, another link with antiquity. It was built in the 13th century, later captured by the Normans and finally destroyed by the invading Venetians. Today it looks out over the more peaceful invasion of foreign tourists, out to enjoy Kassiópi, not destroy it.

Kassiopi as seen from its Byzantine Fortress
Photo by Bejo

The ruins of the Byzantine Fortress on the headland to the west of the harbour are evocative at dusks when owls can be heard hooting.

Where to Stay in Kassiopi