This Amari Valley drive in southern Crete starts and ends in Ayia Galini, takes four to five hours, and cover 100 kilometers or 62 miles. 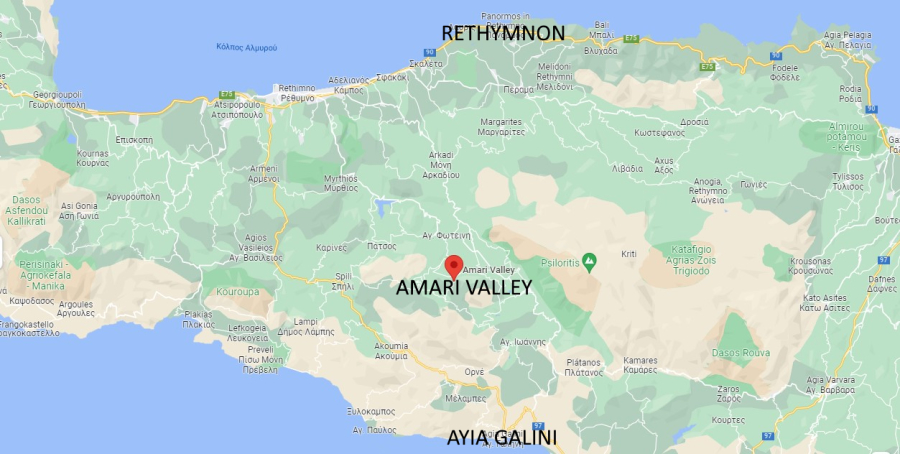 The Amari Valley is one of the most beautiful and fertile regions of Crete. Despite this, and the fact that it is easily reached from popular tourist spots on both the north and south coast, comparatively few visitors venture there. Those that do, enjoy some breath-taking views, see orchards, vineyards, and olive groves, and will experience genuine Cretan hospitality in the lovely villages encountered en route.

It is easy to start the drive from Rethymnon, and join this route at Ayía Fotínis (30 km/18.6 miles from Rethymnon), but our route from Ayía Galíni begins with some winding roads with spectacular views.

If you want a print-out of the route here's a link to a PDF of this Amari Valley Drive.

Take the only road out of Ayía Galíni. Ignore the first two roads going off to the left. After 5 km (3.1 miles) take the left turn for Amári and Rethymnon. As you now head north you see the southern slopes of the Psilorítis range ahead of you to the right.

After 2 km (1.2 miles) a sign in Greek indicates the left turn to Paraskeví, which you take. The road is asphalt but watch out for the pot-holes! There are olive groves on either side, and high in the hills to your left is the mountain village of Mélambes.

In Ayía Paraskeví the church of the Panayía has fine 16th century frescoes, though you will have to park and ask for directions as it is hidden away, off the main road. This road winds up through Ayía Paraskeví and becomes more gravelly with some sharp uphill bends. The high peak on the left on the far side of the valley is Kédhros (1,776 meters/5,827 feet).

At the next junction take the left fork towards Rethymnon. This is a wonderful road that snakes down into the valley and up the other side, with many a sharp bend. Passengers may want to look out for eagles and vultures circling overhead.

Some 9 km (5.6 miles) after the junction you reach an unmarked junction. Turn right. 2 km (1.2 miles) beyond is the sleepy hamlet of Khordáki, and a few kilometres beyond that the hill town of Áno Méros, where white houses fill the hillside and there are a few cafés and shops.

About 4 km (2.5 miles) beyond Áno Méros is Vríses, where there are more shops and cafés and, on the right of the main road, a large, white war memorial. These Amari Valley villages may look peaceful now, but after the kidnapping of the German General Kreipe during the battle for Crete in World War II, German troops destroyed the villages by way of reprisal, slaughtering the village men, looting and burning the houses, and even dynamiting schools and cemeteries. The villages you pass through today were rebuilt after the war, although a few old churches survived the destruction.

5 km (3.1 miles) after Vríses is Yerakári, the centre of the cherry-growing area of the valley. If you pull over at one of the shops or tavernas you should be able to buy or sample some cherry brandy or cherry preserve.

Continue through Yerakári, and ignore the left turn to Spíli and some minor turns, staying on the main road towards Méronas. In Méronas look for the old church on the right. Park around the next bend where there is a monument to the villagers who have died in various wars from 1717 to 1949.

Walk back to look at the beautiful 14th century Byzantine church of the Panayía. It has lovingly-tended gardens outside, and inside the walls and ceilings are covered with frescoes.

A few kilometres beyond Méronas is a picnic stop on the right, with fabulous views of the valley. Soon after this is the village of Ayía Fotínis, where you meet a main road: turn right, signposted for the Asomati School. After 1 km (0.6 miles) turn left, for Thrónos.

In Thrónos is the wonderful 11th century church of the Panayía, on the right. Though usually locked, there is part of a lovely mosaic to be seen on the floor outside the church, and beyond it good views of the valley.

Beyond Thrónos the road forks. Turn right to loop back down and meet the main road again, where you turn left. When you reach the next few houses take the sharp right turn to the village of Amári itself.

In Amári, park in the small square outside the taverna and walk up the nearby narrow street that heads up towards the Venetian Bell Tower. You can climb the tower to enjoy the views but there is no guard rail so take care. Drive back out of the village square the same way you came in, keeping straight on past the Police Station and on through Monastiráki to rejoin the main road.

At Apodoúlou, if time allows, park in the village and look for the signs to the Minoan site which is still being excavated, and to the 14th century church of Ayíos Yiórgios.

Back to Ayia Galini

Beyond Apodoúlou, ignore the left fork marked Platanías and keep on the main road, to the right but not signposted. Rejoin the main road and turn left towards Timbáki, then at the next junction turn right back to Ayía Galíni.