Paleohora and the South-West Coast

The area east from Paleohora along the south-west coast of Crete includes resorts like Agia Galini, gorges like the Imbros Gorge and quieter towns like Sfakia. 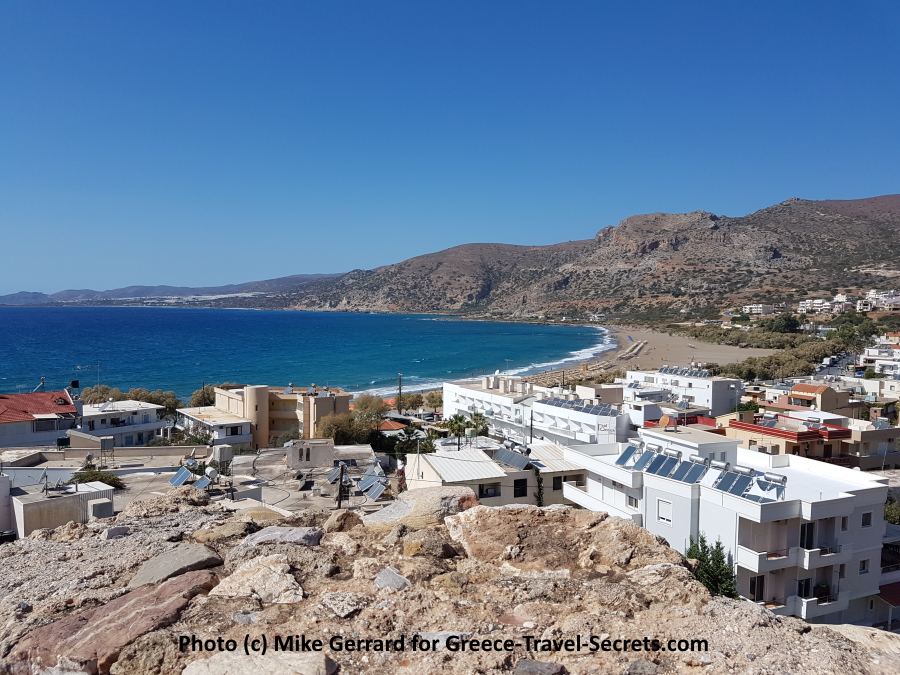 The south-west coast of Crete between Phaistos in the centre and Paleohora in the west is nowhere near as developed as the corresponding stretch of coast on the northern side of the island. However, the few resorts that do exist, due to the rugged nature of the landscape that prevents extensive development, do tend to be almost as busy in summer as their northern counterparts.

Here are some of the main attractions along the south coast of Crete, between Phaistos and Paleohora, given in alphabetical order.

The town of Ayia Galini, west of Phaistos, is one of the prettiest resorts on the southern coast. Nestled into the surrounding mountains, its white-washed buildings, dripping with bright bougainvillea and jasmine, rise up the steep streets from a picturesque harbour.

This former fishing village is now pretty much given over to tourism, and the handful of traffic-free streets in the centre are lined with shops and good restaurants. The long strip of beach has more rocks than sand, but is pleasantly lined with tavernas. Though the town can get busy it is a real delight off-season.

A popular drive from here is inland to the Amari Valley in the shadow of Mt Psiloritis, more popularly known as Mt Ída and the highest peak on the island (2,456m/8,058ft). Here is the heart of Crete, a strong centre for the Resistance movement during World War II and where men can still be seen wearing the region’s traditional costumes of baggy black trousers and high mountain boots. It’s an area of small rural villages, fertile valleys and dramatic gorges.

This Minoan site might seem very small-scale after nearby Phaistós, but its intimate nature is the very reason it should be visited. The main ruins are of a small palace or large royal villa, built in about 1600BC and destroyed, like other Minoan sites, by a huge fire in about 1450 BC.

Staircases indicate the split-level nature of the palace, and note also the drainage channels running down between some of the buildings. Fabulous mosaics, jewellery, pottery and other finds have been made here, all now on display at the Archaeological Museum in Irakleio.

There is also a cemetery, and the remains of the small town which built up around the palace: a market, shops, houses and workshops. Part of Ayia Triadha’s delight is that no-one is quite sure what it was or who lived here, as there are no references to it in existing Minoan records. 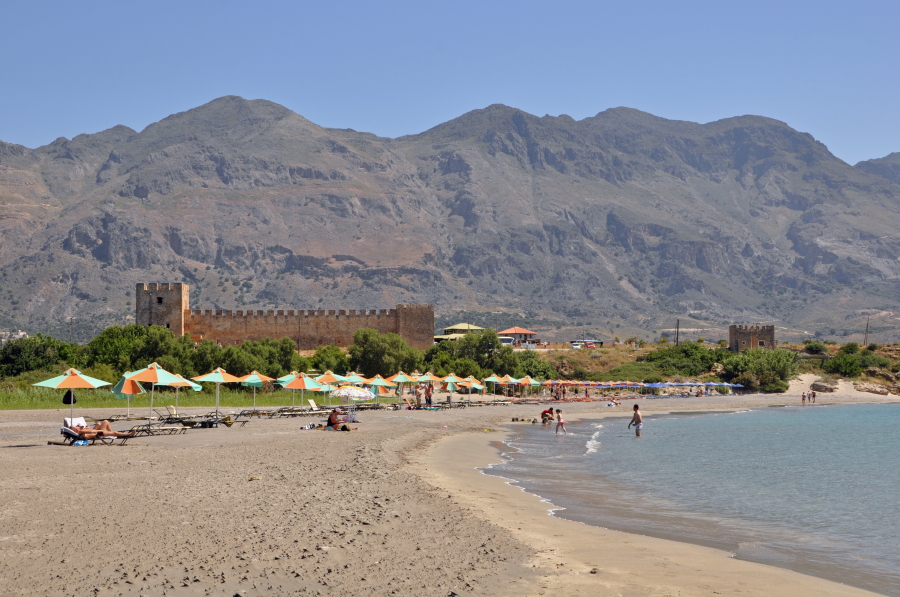 In-between Plakias and Sfakia are the remains of the Venetian fortress of Frangokastello, built in 1371 and whose walls still survive in almost perfect condition. Approaching the castle by road, you would be forgiven for thinking that it was still a working building. In fact little remains of the interior, but its atmospheric setting by the sea and the view from outside make the visit well worthwhile.

It was built partly to protect this rugged coast from pirates, but also to keep the local population in order, as the residents of the next town along the coast, Sfakia, had a particular reputation for troublesome independence.

Matala’s days as a hippie haven are long gone, but its famous caves continue to draw scores of visitors. The caves are man-made, cut into the sandstone cliffs by Romans and early Christians and used as catacombs. They were then inhabited by local people down the centuries until the 1960s, when hippies moved in. The caves are now fenced off to discourage overnight stays, but it’s worth the small charge to see them during the day. Some have carved doorways, windows and benches.

The caves form a honeycomb backdrop to Matala’s fabulous beach, wide and curving round the bay with taverna balconies jutting over the sand. Otherwise, it’s a small town with one touristy strip of restaurants and shops, and tends to attract younger travellers. See our guest blog on Matala. 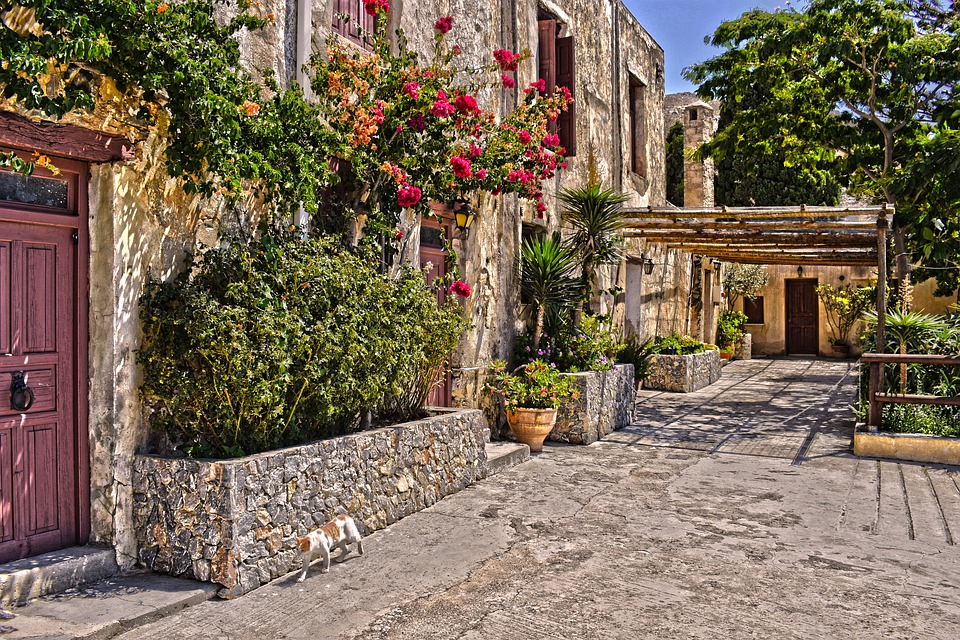 Slightly to the west of the Amari Valley, the Kourtaliotiko Gorge leads down through splendid scenery to the coastal monastery of Moni Preveli. It dates from the 17th-19th centuries and can be visited, but it is still a working monastery so dress respectfully.

At 2,456 metres (8,058 ft) , Mount Ída is the highest summit in Crete. The locals call it Psilorítis, ‘the high one’. Its twin peaks are capped with snow late into spring and are often hidden in cloud, but on a clear day when the powerful granite bulk is revealed you can see why Zeus might have chosen it for his childhood home.

From Anoyia, a good paved road winds up through the stark, rocky landscape to the Ídhaean Cave, 22km (14 miles) away. It's also referred to as the Diktean Cave or the Psychro Cave (after the nearby village). The trip takes about half an hour each way.

Birds of prey circle overhead, and you pass the round stone shepherds’ huts, or mitáta. Most are now abandoned but were used in times past as summer dwellings and for making yogurt and cheese from sheep’s milk. The drive is especially pretty in late spring, when the rugged landscape is ablaze with wildflowers. As you climb higher you may find yourself driving through low-lying clouds.

The road opens out with fine views over the fertile Nída Plateau far below. An unfinished visitor centre sits forlornly at the road’s end, but there’s a cheerful taverna inside.

A 15-minute walk brings you to the Ídhaean Cave. A place of pilgrimage and cult worship since Minoan times, it yielded a wealth of artifacts from throughout Greece and is mentioned in the works of Plato and Pythagoras. Steps lead down into the cave but you may find its history is the most exciting part — it is relatively shallow and has no impressive natural features. See our separate page on the Diktean Cave.

Located off the beaten track in the village of Vóri, near Phaistos, this excellent folk museum, founded by a local man, is one of the best of its kind on the island. The items are attractively laid out, with information panels in English. The ground floor exhibits include agricultural and domestic tools, such as terracotta beehives used since Pharaonic times, furniture and pottery.

There is a beautiful collection of woven blankets and textiles, and an interesting look at door patterns and their relation to status. The highlight upstairs is a fascinating display of 25 types of baskets, made with different techniques and for different purposes. There are also musical instruments, and wonderful photos of people and festivals. Museum of Cretan Ethnology website. 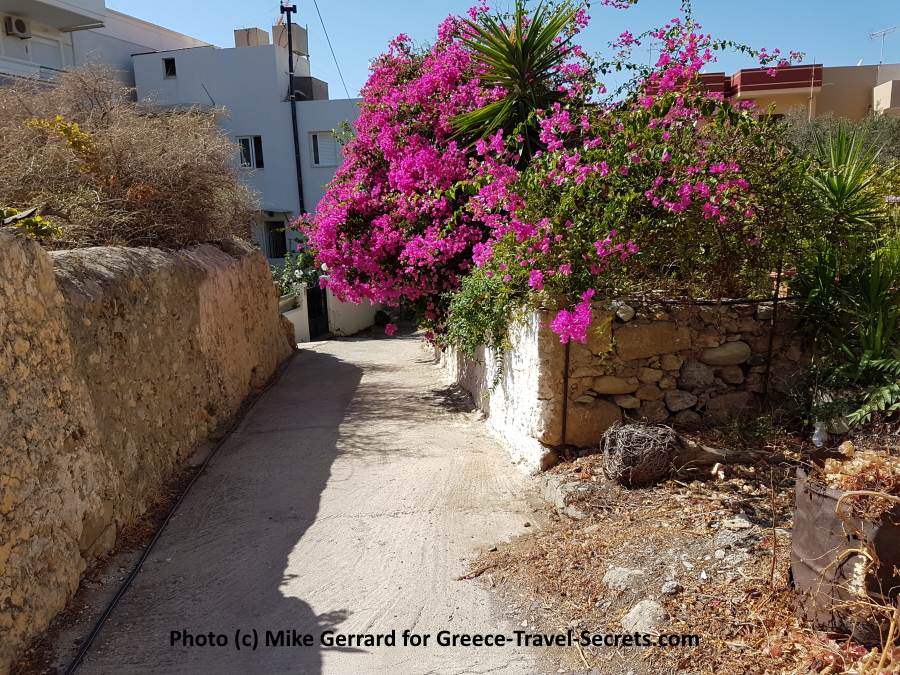 In the Quiet Back Streets of Paleohora

Tourism reached the western-most resort of Paleohora many years ago, and although it remained relatively quiet for a long time it has now boomed as a package holiday resort - though nothing like as much as the north coast resorts.

It has two stretches of fine beach, either side of a headland topped by the remains of a Venetian fortress, and very good conditions for windsurfing and other water sports. It is another good base for those who may want to mix relaxation with exploration, via the paths into the hills and along the coast, and boat trips to other resorts and villages. See also our page on Hiking in Southwest Crete, when we were based in Paleohora. 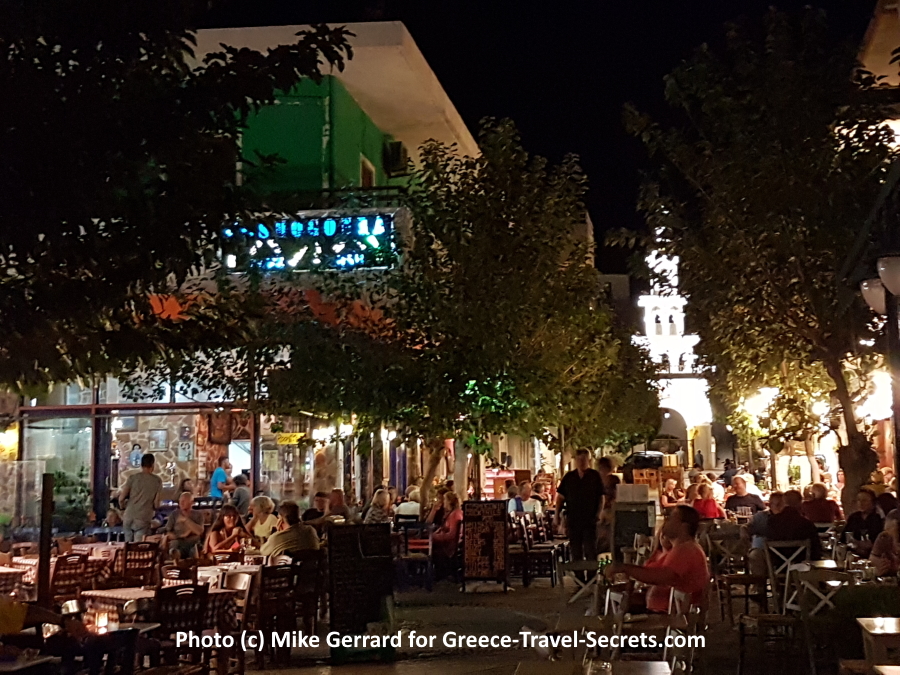 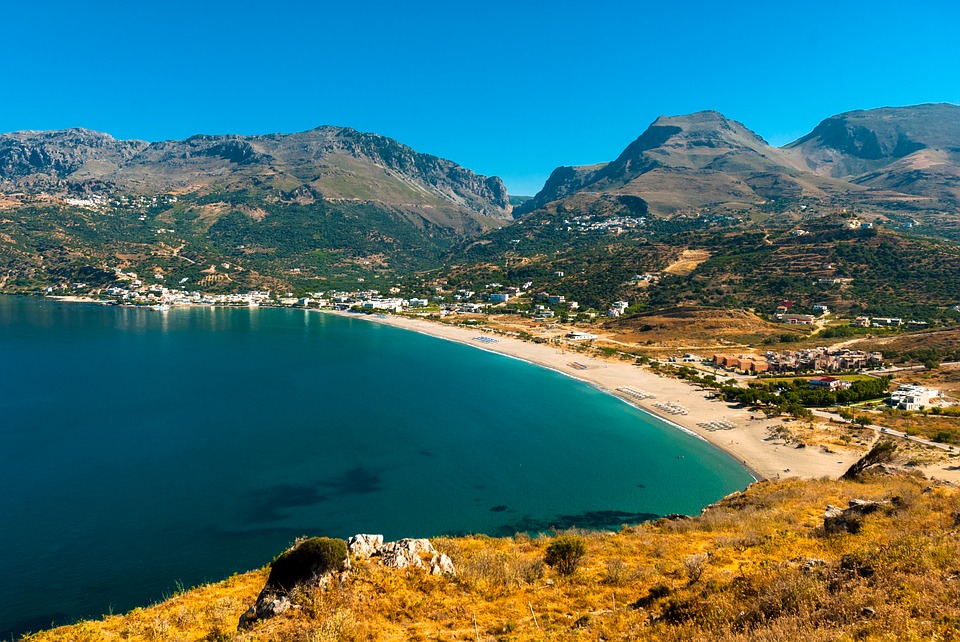 The small resort of Plakias has a 2km-long (1.25 miles) strip of sandy beach which attracts sunbathers galore, with other beaches accessible along the coast. It is also set at the end of another scenic ravine, the Kotsyfou Gorge, while the next major town, Sfakia, is reached via the Imbros Gorge, not quite as impressive as the Samaria Gorge but much less busy. 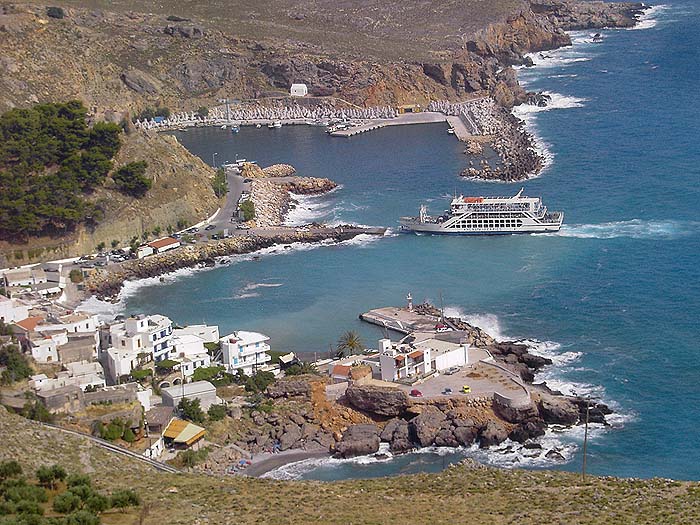 Sfakia (or Chora Sfakion) would be the preferred base for those who want to enjoy not only some of Crete’s finest scenery, but also see something of its traditional way of life. The town’s position at the end of the Imbros Gorge, and hemmed in to the west by a mountain range that plunges in places sheer to the sea, meant that for many years access was mainly by boat.

As such, modern life has impinged on it to a lesser degree than on resorts such as Plakias and Agia Galini. It is still a busy and popular spot with visitors, but the local people have held onto their history and traditions much more strongly. Those traditions include tribal feuding, but immense hospitality to the outside visitor. Here again, traditional costumes are still worn by some of the older men.