The Summer of My Greek Taverna

The Summer of My Greek Taverna by Tom Stone is a memoir of his time on the Greek island of Patmos in the Dodecanese, running a restaurant.

The Summer of My Greek Taverna

The Sumer of My Greek Taverna is a little gem of Greek travel writing.  The American author shows that he is a true Grecophile by giving up his career on New York’s Broadway to go for his dream of living on a Greek island for a while. Of course, as in so many cases, the ‘while’ turns into something much longer: 22 years! 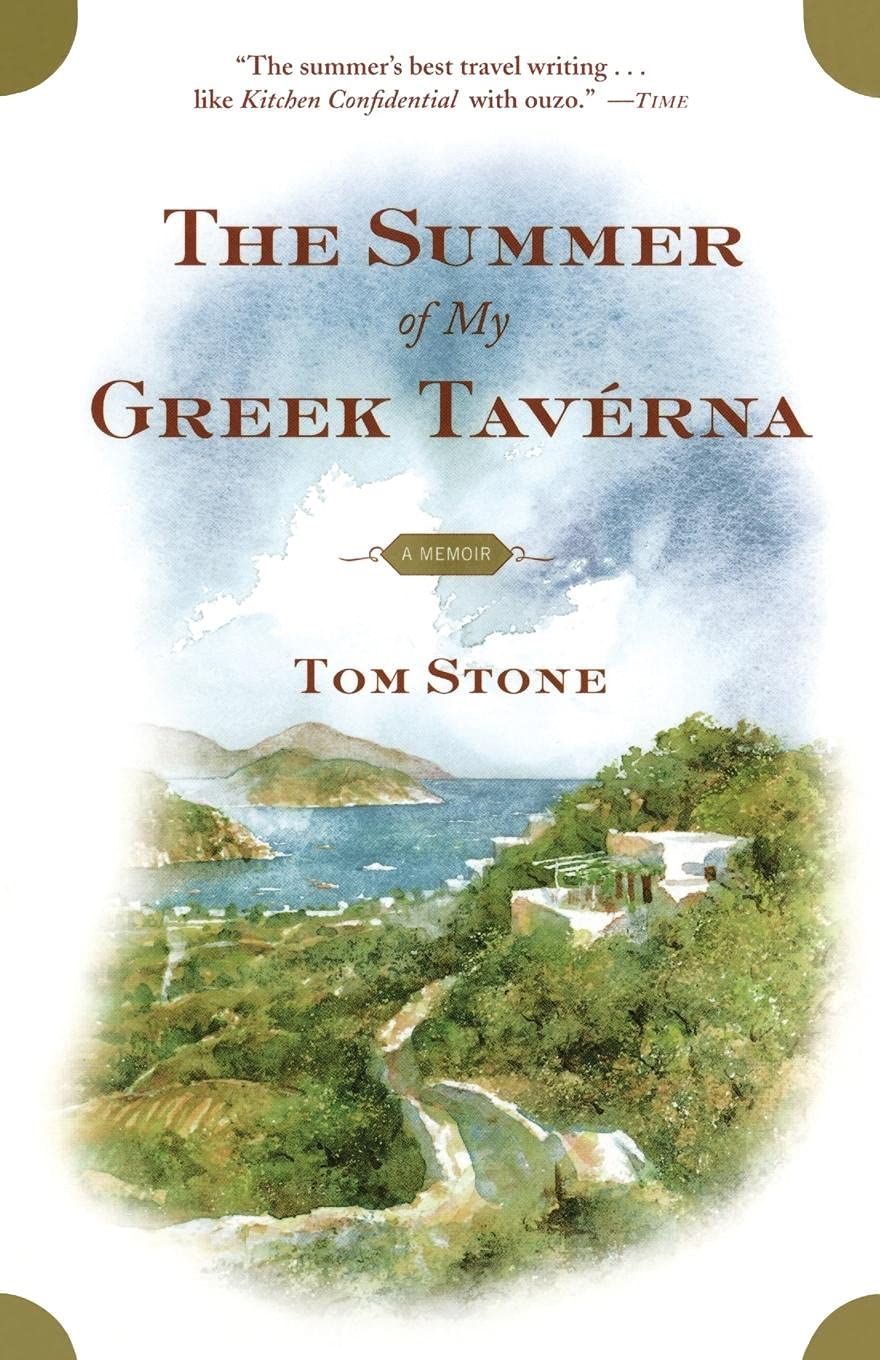 The story that’s at the heart of the book only takes place several years after the author first moves to Patmos in the Dodecanese, where his dream is to write his novel. While there, though, he meets and falls in love with Danielle, a French artist. The two marry and go to live in Rethymnon on Crete.

Here he still wants to write, she wants to paint, but as by now they have two children, they have to bring in some money somehow. When The Summer of My Greek Taverna begins, the author is teaching English while his wife is painting Greek icons to sell in the tourist shops.

This is the situation when Stone receives a phone call from someone he knew back on Patmos, who runs a taverna in the little village where the couple lived. The taverna and the village are given fictitious names, and it’s obvious why when you get into the book.

The caller is Theologos, and he has a proposition for Tom Stone. Would he like to run Theologos’s taverna for the summer, as he says he’s getting a bit old for it and thought Tom, a keen amateur chef who has also worked as a waiter in Rethymnon, might be interested.

The first instinct is that it’s a crazy idea, a big upheaval to take their two children to Patmos to do something Tom has never done before, not knowing what the outcome might be. Tom does some maths and works out that they could make enough during the summer to enable them to work at writing and painting for the rest of the year, and beyond. Danielle takes some convincing, but eventually supports her husband in what he wants to do.

So, the couple return to Patmos and move into the apartment they first rented on the island, before they bought a house there, which they eventually sold. Part of the proceeds of the house go towards paying Theologos for the right to run the restaurant for one season, and share the profits.

Theologos has agreed to be the buyer of supplies, but leaves the author to run the restaurant and the kitchen. Right at the start there’s a misunderstanding, when the author offers to work an extra two days before his contract stipulates, only to find that Theologos won’t split the tidy profits as the author volunteered to do the work and the contract hadn’t yet come into play. 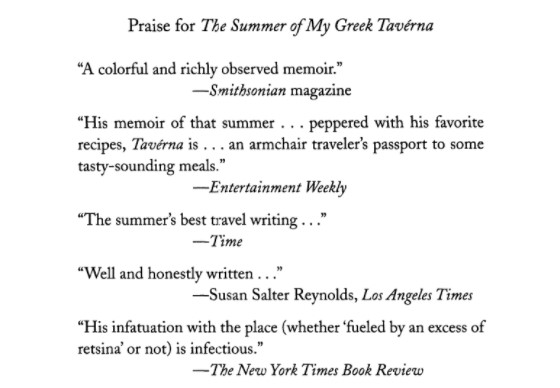 Praise for The Summer of my Greek Taverna

Over the course of the summer in his Greek taverna, the author discovers the harsh realities of his new life. For one, running the taverna takes up more hours than he ever imagined. He finds himself flopping onto the bed next to his wife at 4am some nights, without even the energy to get undressed. Another discovery is that his relationship with the islanders who had become friends in the years he and his wife lived on Patmos, is now different. To some he has become a rival, and everyone now regards him as a temporary Greek, and a businessman, to be treated with caution and even cheated if they get the opportunity.

It’s the many different aspects of life on the island, and the fact that it’s very well-written, that make the book such a joy to read, It’s in turns funny, sad, touching, and a very human story. You’re rooting for him to succeed, you worry about his relationship with his wife when he hardly sees her for day after day, and you’re fascinated by the insights into what it’s like to run a taverna in the Greek islands at the height of the tourist season in August.

The Summer of my Greek Taverna Recipes

It would be unfair to reveal how the book ends. At the back, however, is the menu of the taverna (called in the book The Beautiful Helen), and almost 40 pages of recipes. These include Greek staples, like tzatziki, stifado, and meatballs, and others that the author added to the menu to give it more of an international feel, such as chili con carne and curried chicken.

You’ll also find a recipe for his moussaka, which he says is the best he’s ever found, from a chef he worked for in Rethymnon, and some recipes of his own devising, including tzatziki omelette and chicken retsina.

All in all this is a delightful read, which you won’t want to put down, and a real addition to the classic books about Greece, alongside Lawrence Durrell and Patrick Leigh Fermor. Perhaps not quite in their league in terms of literary quality, but certainly every bit as readable. It’s enough to say that it was first published in 2002, and it’s still in print some twenty years later.

Where to Stay on Patmos