The Greece Travel Secrets guide to Greek grape varieties to help you know which wines to choose when dining in restaurants or buying wine in Greece.

Which Greek Grape Variety Is This?

Some Greek grape varieties are indigenous to Greece, and don't grow anywhere else. Others are related to more familiar-sounding grapes grown around the world. Some vineyards have also experimented with growing non-Greek grapes, like chardonnay or shiraz, with mixed degrees of success.

There's also the all-important question of terroir. Santorini, for example, is at roughly the same latitude as southern California, but has a semi-arid Mediterranean climate, and its own distinctive volcanic soil, so winemaking here is very different from somewhere like Sonoma or Napa Valley.

Agiorgitiko is a name you'll come across, especially in the Peloponnese, where it grows widely. It's native to the Nemea region, in the very north-east of the Peloponnese, and is one of the Greek grape varieties that you can compare to a more familiar name: Beaujolais Nouveau. Agiorgitiko produces red wines that are light and fruity, like a good Beaujolais Nouveau, but unlike the French wine it isn't meant to be drunk immediately but can improve with aging over a few years.

Kotsifali is another commonly-seen name, and this is native to Crete. However, because Cretan wines are among the top Greek wines and are increasingly sold throughout Greece and overseas, you may well come across it elsewhere. On its own it produces a bold but subtle red wine, and it also lends itself well to blending. We sampled some while touring the Lyrarakis Winery on Crete.

Vines at the Lyrarakis Winery on Crete

Liatiko is also native to Crete and produces good red wines, but ones that are a little spicier on the palate. It's also one of the varieties used to produce the blended sweet red wine, Malvasia.

Limnio is a Greek grape variety that's native to, not surprisingly, the island of Lemnos/Limnos. It has been used here for hundreds if not thousands of years to produce a red wine by itself, but it also blends well with a large number of other grape varieties including non-Greek grape varieties like Cabernet Sauvignon and Shiraz. It's a robust wine that goes well with meat and game.

Mandilaria is a red Greek grape variety that is grown on many islands, including the two big wine-making islands of Crete and Rhodes. It's confusing because it goes by different names in different places, including Amorgiano, Kontoura, and variations on the name Mandalaria. It's commonly blended with other wines to make red wines that are rich in colour but still fairly light-bodied.

Mavrodafni is another common Greek grape variety that is plentiful in the Peloponnese and the Ionian Islands. In these islands, Kefalonia has several good wineries. Mavrodafni grapes are blended with currants to produce a fortified sweet dessert wine.

Mavroudi is one of the oldest-known Greek grapes and it grows all over the Greek mainland. Mavro means 'black' and this grape produces very dark red wines, with a sweetish aroma and a robust and distinctive flavor. It's one of those wines people tend to love or hate, like retsina. But you should at least try it to see which camp you're in.

Negoska is a grape variety mainly grown in Macedonia and produces full-bodied red wines that are often rich with fruity flavours. As such, it's a wine that often appeals to non-Greek palates.

Romeiko grapes grow most widely on Crete and in the Cyclades. It's a very versatile grape that can be used to make red, white, and rosé wines, with equal success. 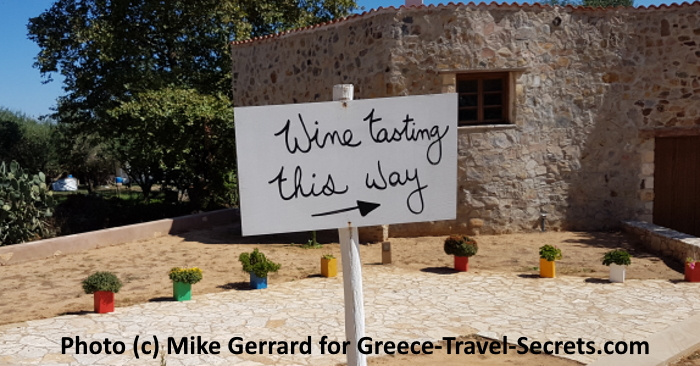 Vertzami is a grape that grows well in the Ionian Islands, in the Peloponnese, and elsewhere in mainland Greece, as well as on Cyprus. It produces a good quality red wine that is suitable for immediate drinking and which has a deep red colour and a taste of both red berries and spices.

Xinomavro is a Greek grape variety that grows in several parts of the mainland, and the vines have even been exported and grown in China and several other countries. It produces a high quality red wine that benefits from aging, and is a full-bodied wine that has been compared to the Italian Barolo wines. It's definitely one to try if you come across it.